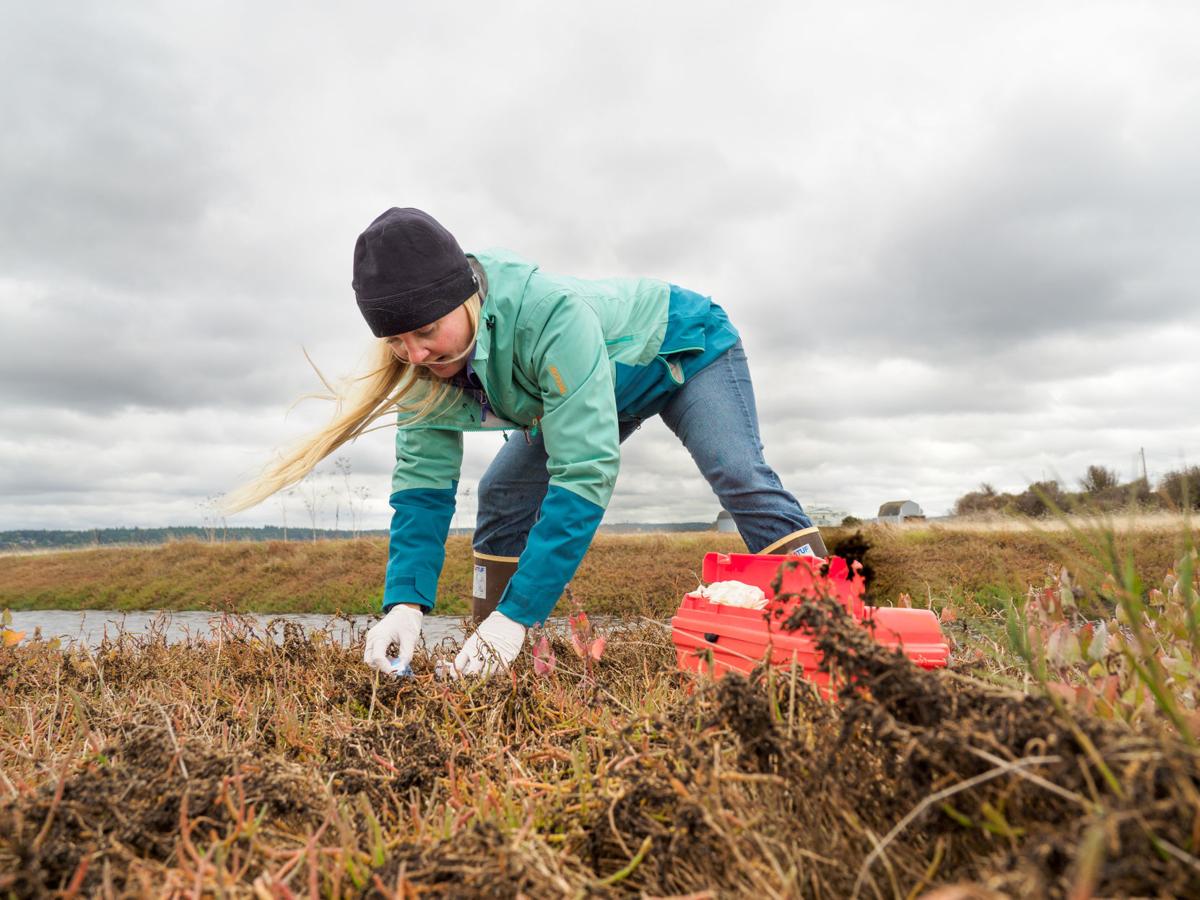 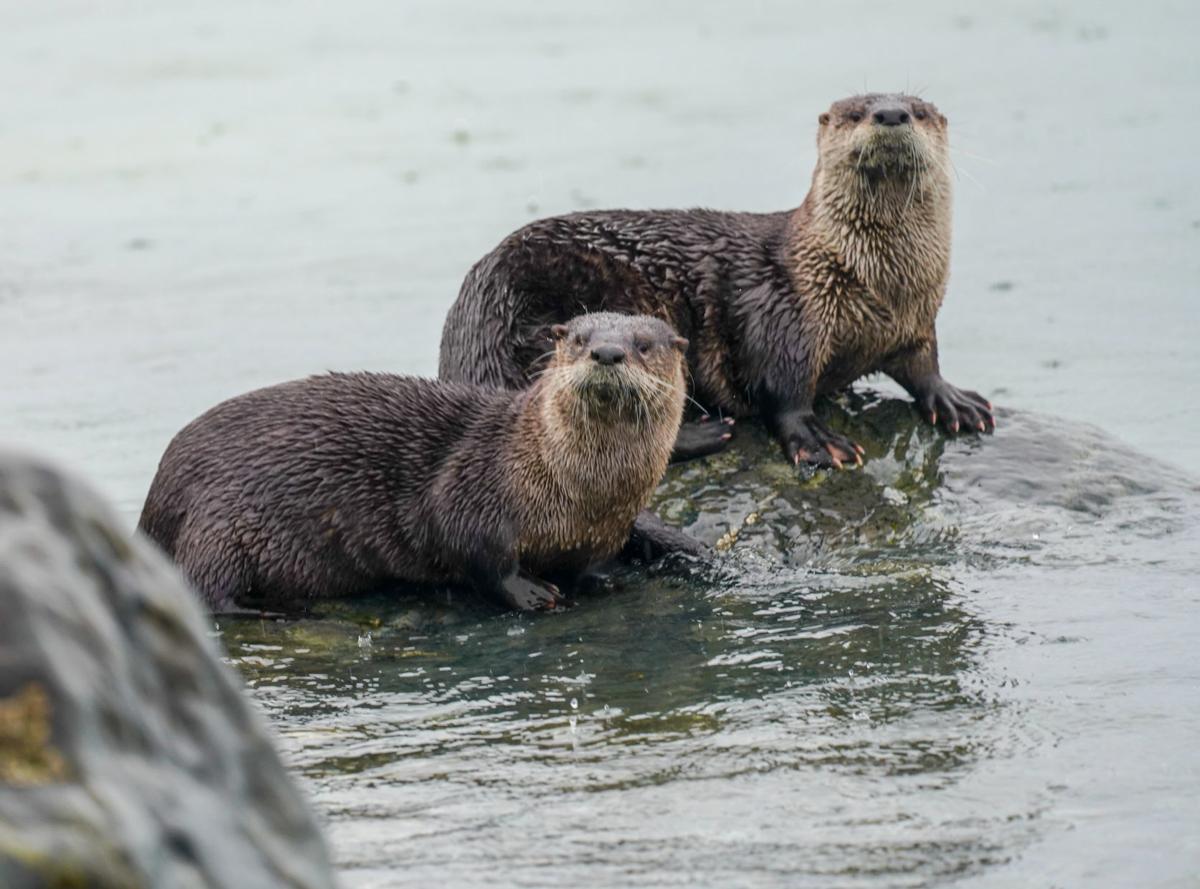 Otters perched on a rock off the shore of Whidbey Island observe their surroundings during a rainy day in November 2018. 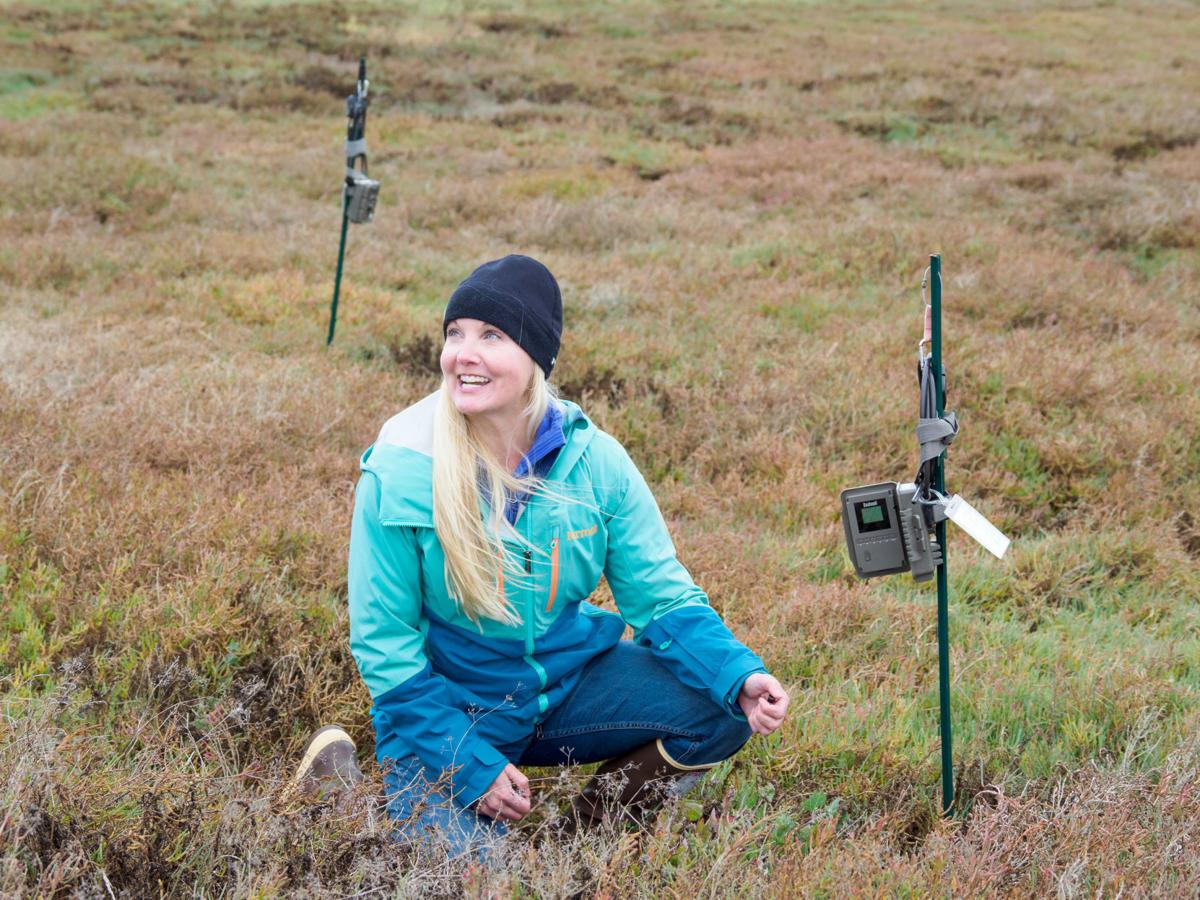 Heide Island chats about river otters, Friday, Oct. 4, while changing the batteries of wildlife cameras on Whidbey Island. Island is studying otters on Whidbey to learn about their eating habits and the environment. 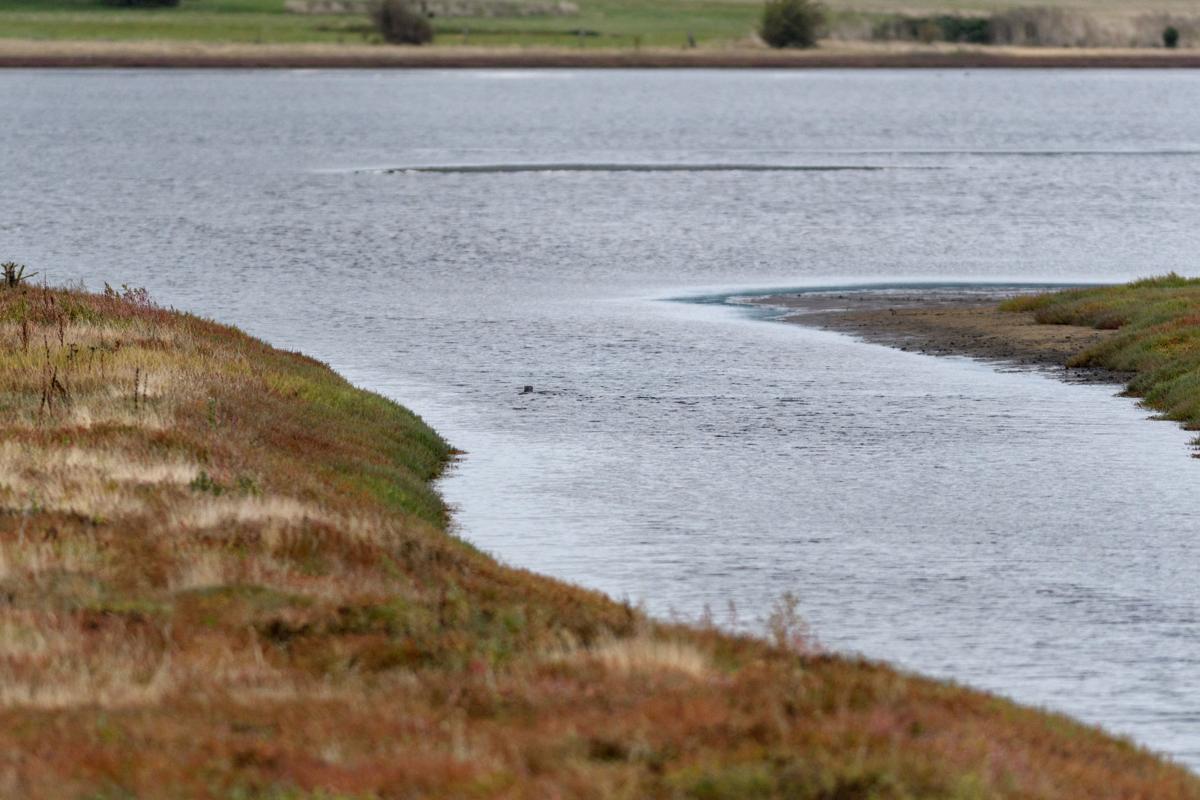 A river otter pops its head above the water Friday, Oct. 4, at Crockett Lake close to the Coupeville Ferry Terminal on Whidbey Island. 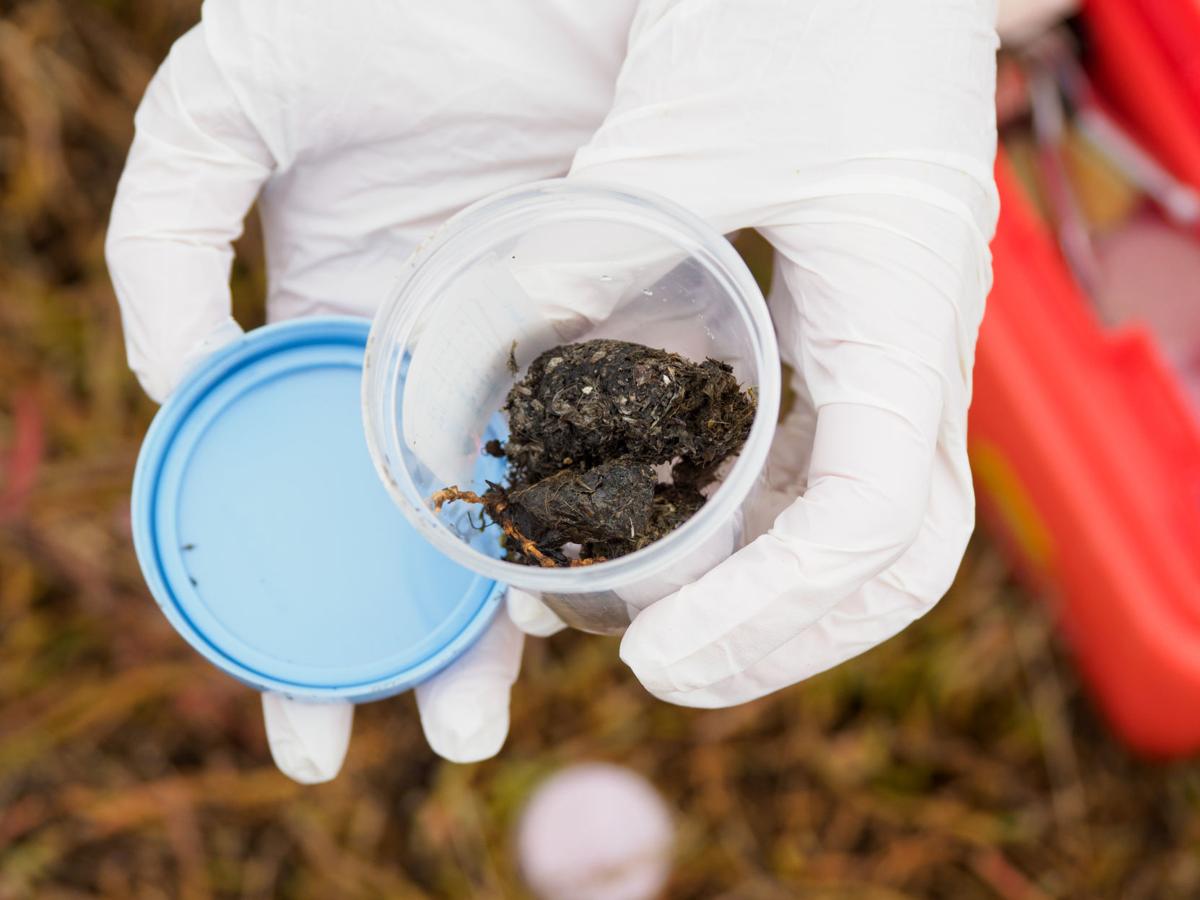 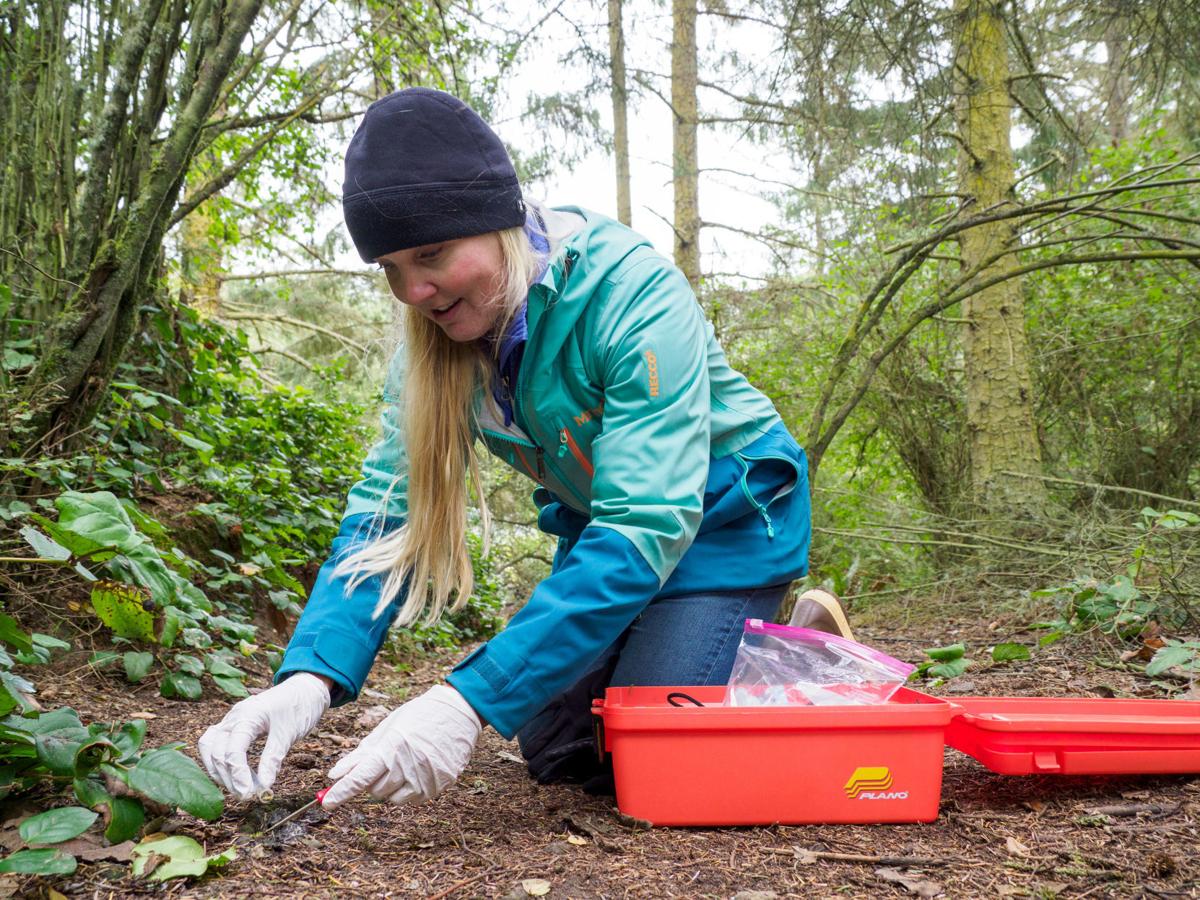 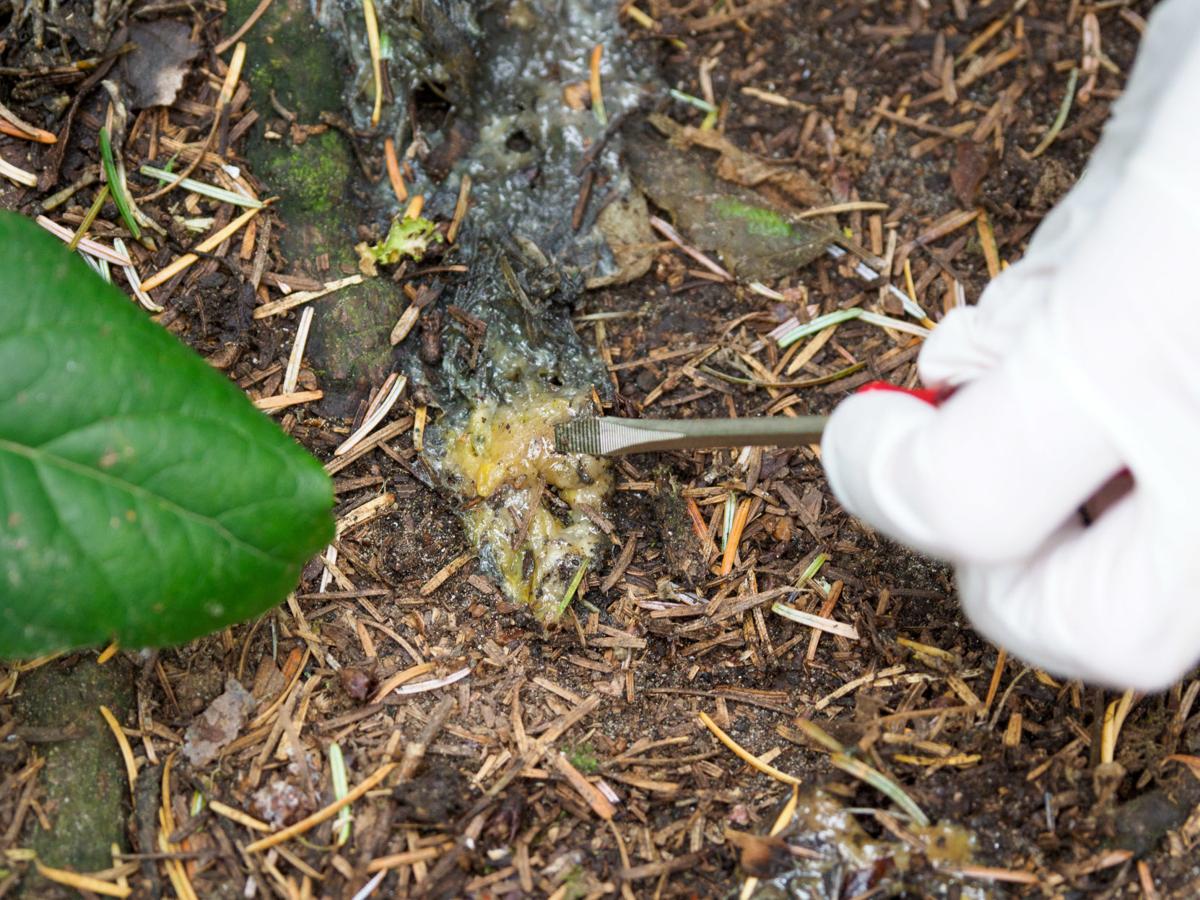 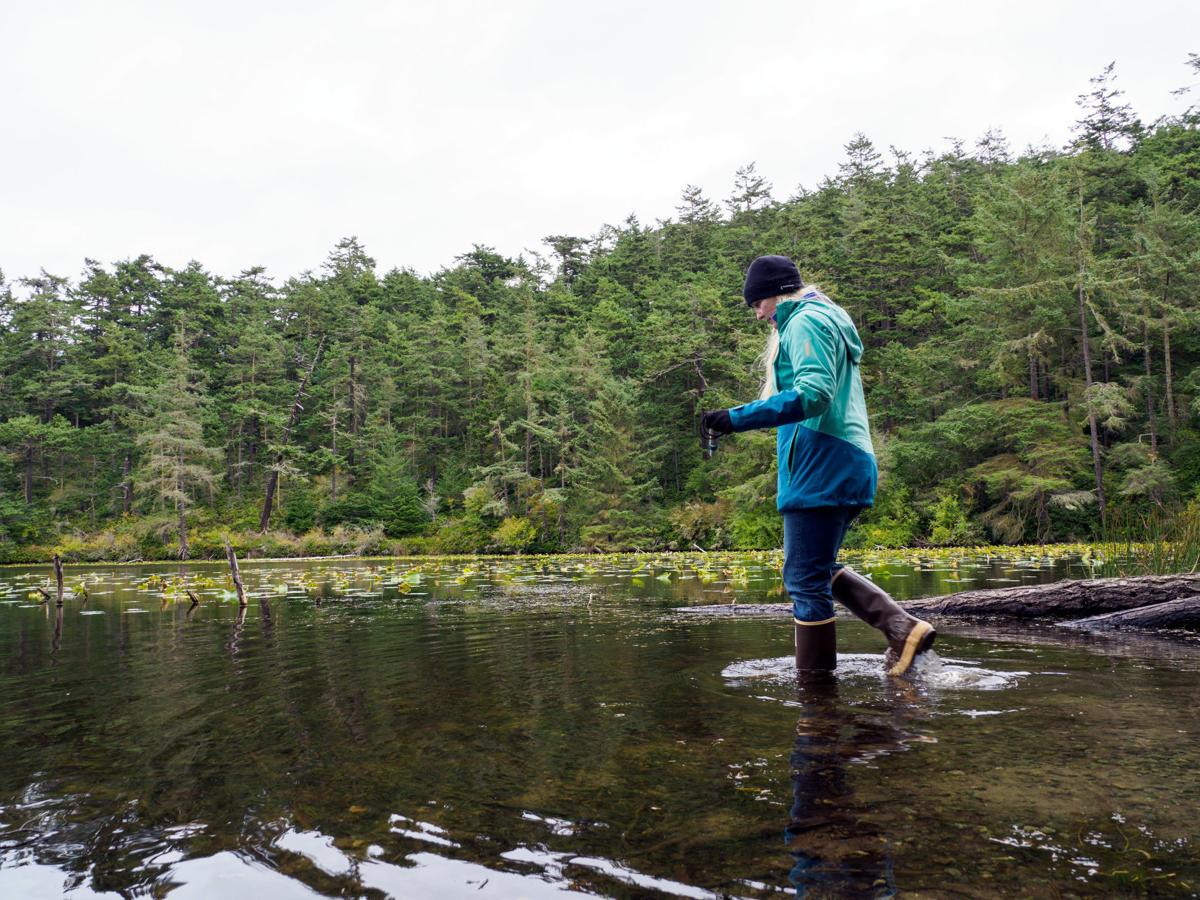 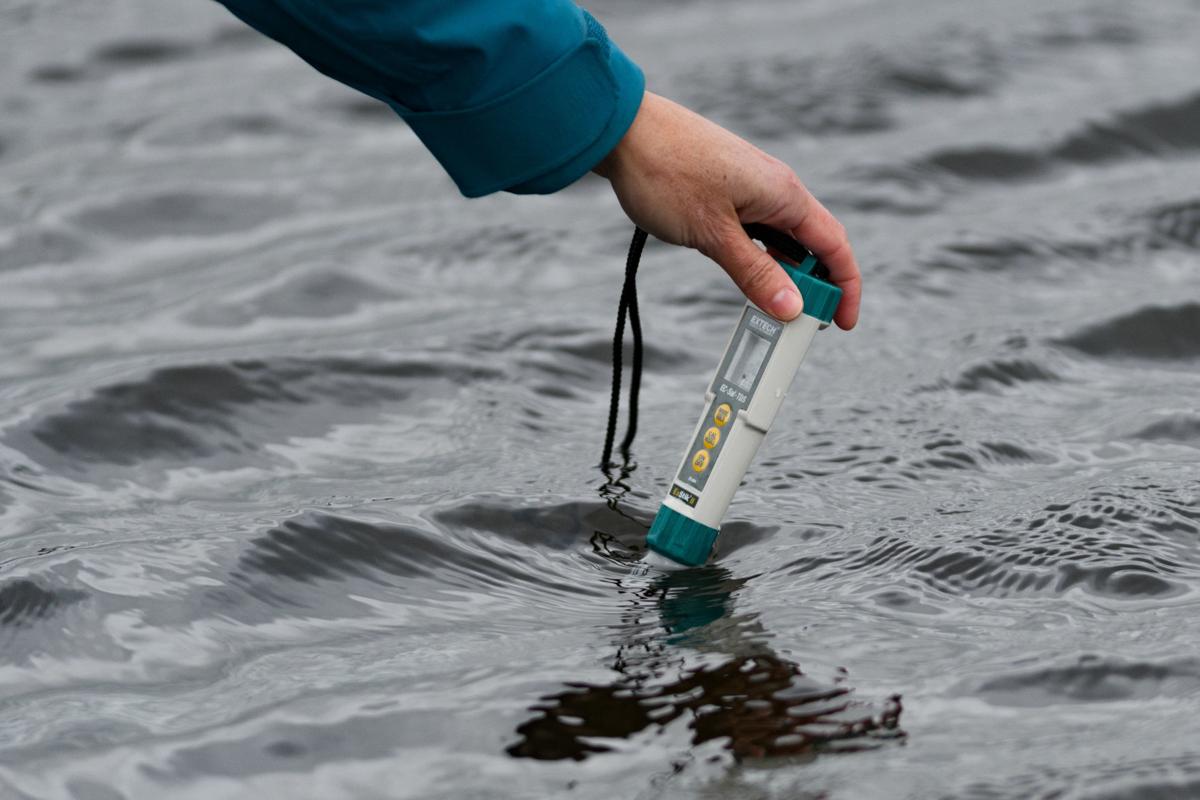 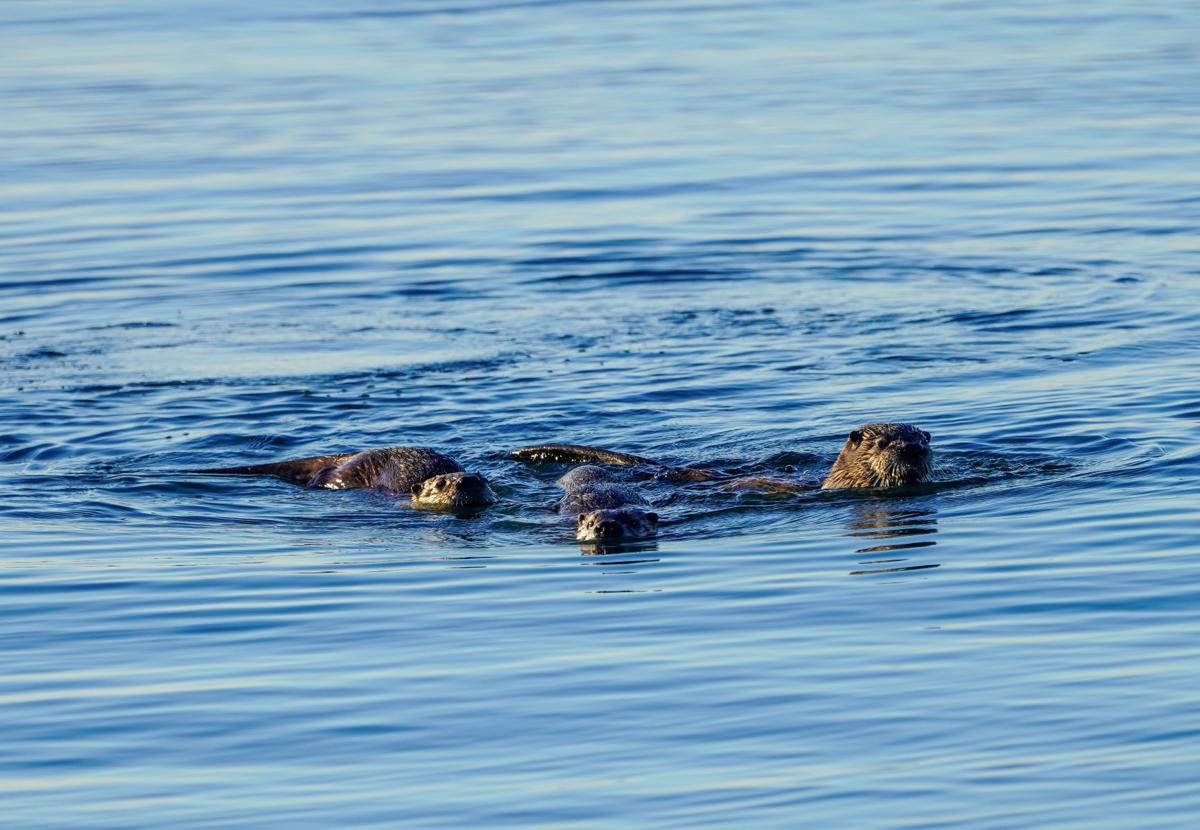 A group of otters living on Whidbey Island go for a swim in November 2018. 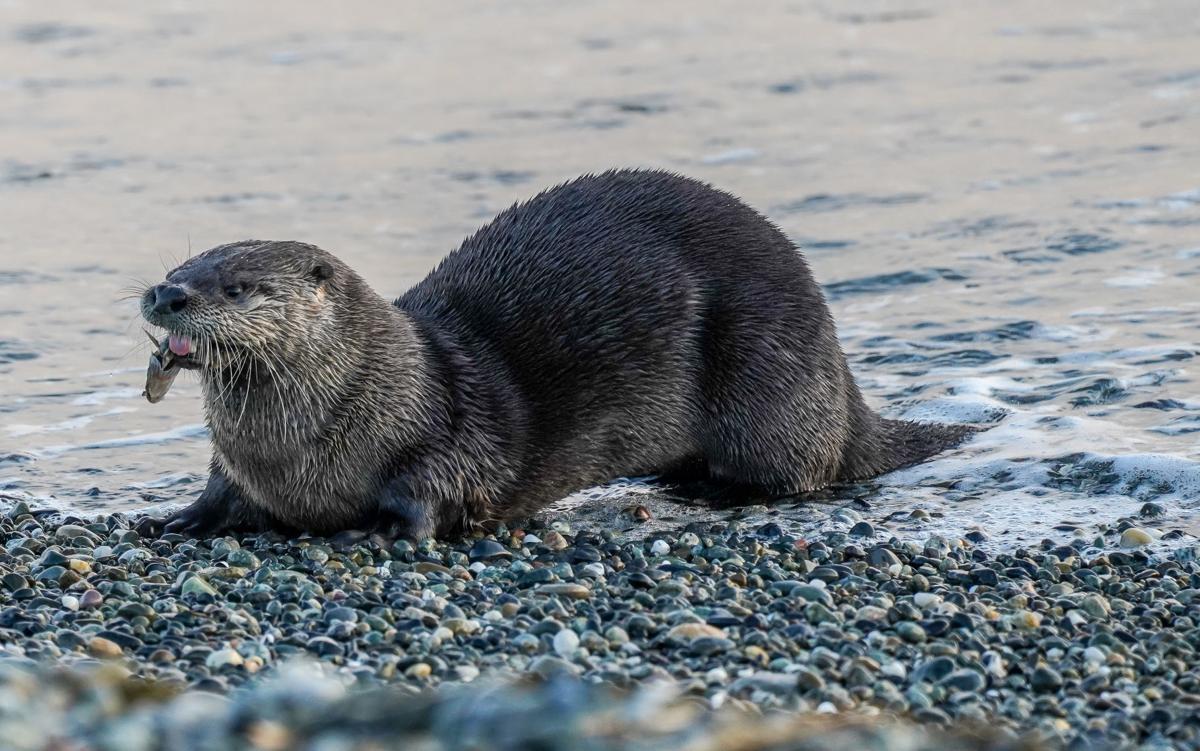 A male otter hauls a fish out of Admiralty Bay onto the Whidbey Island shoreline in October 2018. 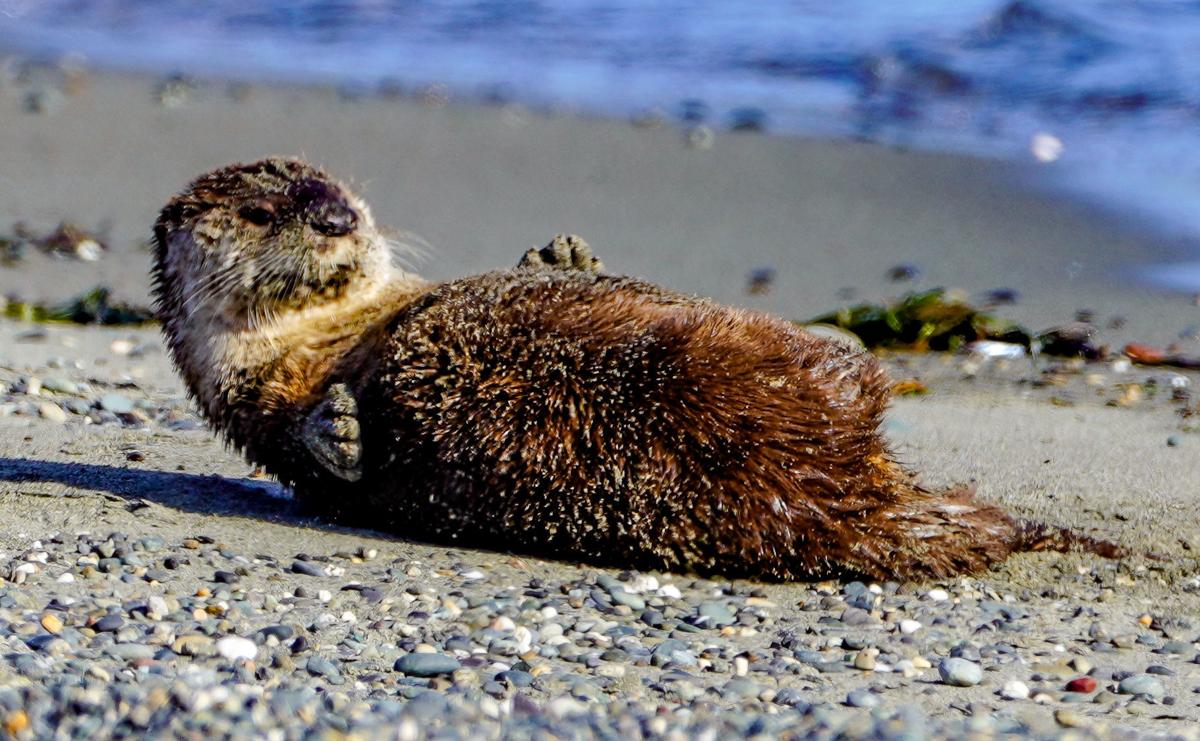 A female river otter rubs herself on the sandy beach of Admiralty Bay on Whidbey Island during mating season in May. 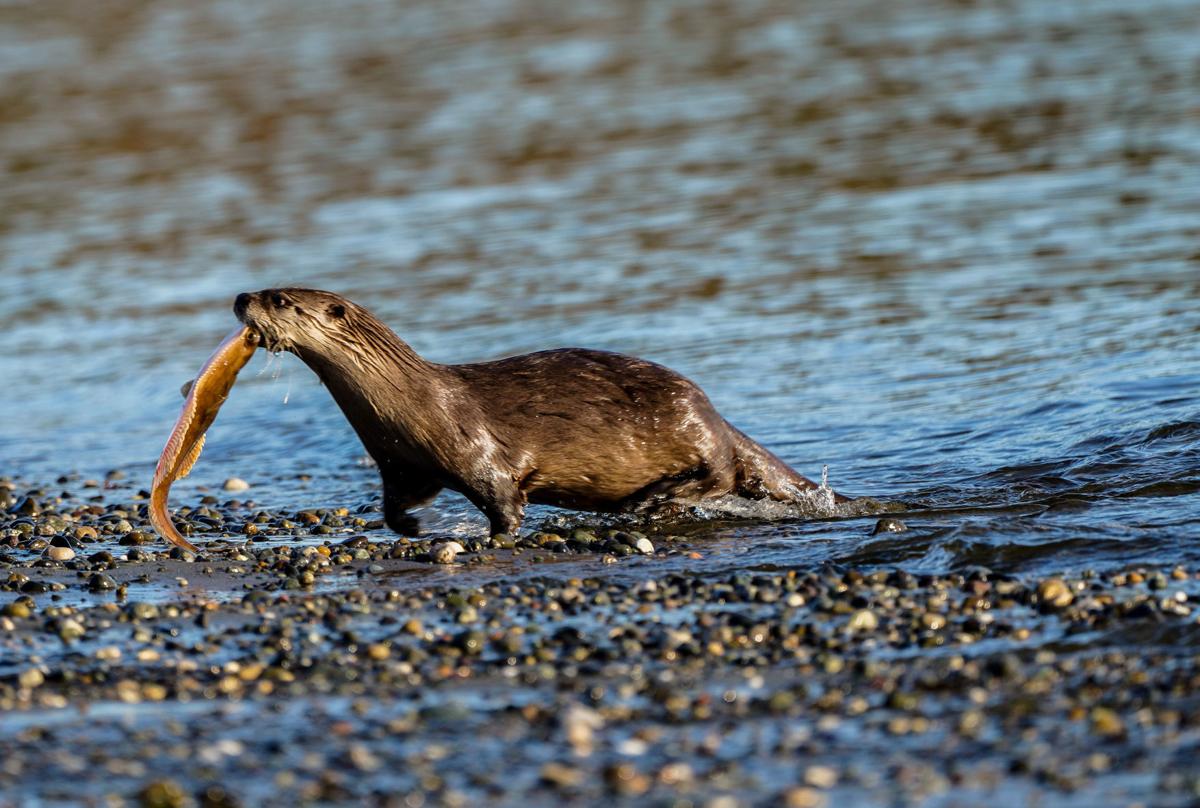 An otter hauls a flatfish out of Admiralty Bay on Whidbey Island in March. 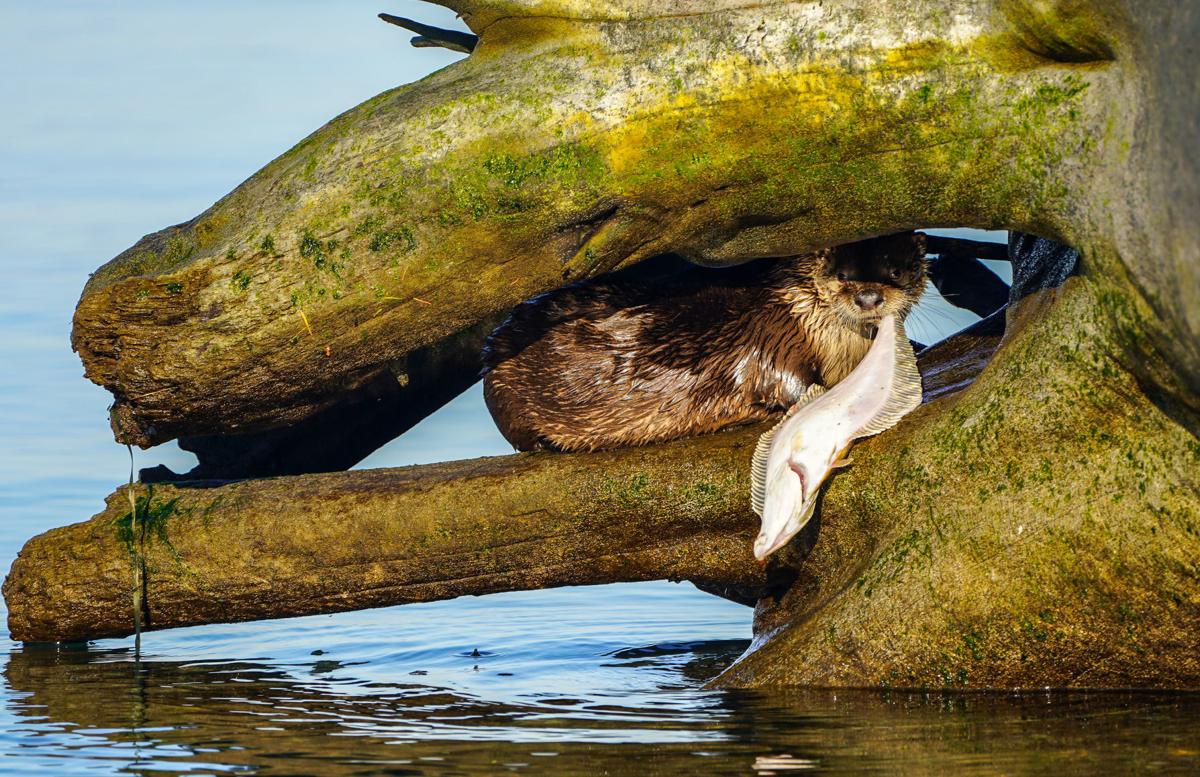 An otter takes cover in March on slime-covered driftwood in Admiralty Bay on Whidbey Island, clutching the tail of a starry flounder in its teeth.

Otters perched on a rock off the shore of Whidbey Island observe their surroundings during a rainy day in November 2018.

Heide Island chats about river otters, Friday, Oct. 4, while changing the batteries of wildlife cameras on Whidbey Island. Island is studying otters on Whidbey to learn about their eating habits and the environment.

A river otter pops its head above the water Friday, Oct. 4, at Crockett Lake close to the Coupeville Ferry Terminal on Whidbey Island.

A group of otters living on Whidbey Island go for a swim in November 2018.

A male otter hauls a fish out of Admiralty Bay onto the Whidbey Island shoreline in October 2018.

A female river otter rubs herself on the sandy beach of Admiralty Bay on Whidbey Island during mating season in May.

WHIDBEY ISLAND — Studying one of the region’s cutest and perhaps most sly critters requires binoculars, wildlife cameras and, for researcher Heide Island, containers to hold feces.

“I just scoop it up like this,” Island said as she demonstrated how she collects river otter droppings.

Island, of Pacific University in Oregon, has been scooping up as much fresh otter poop as she can find. She’s also been collecting another otter excrement called digestive mucus.

Island is committed to following around Whidbey Island otters and gathering their droppings because the cute critters can reveal insights into the health of the environment because they are sensitive to pollutants.

A top question for Island — a comparative psychologist — is how river otters decide where to go and what to eat.

“River otters are so interesting because their foraging patterns are so fluid,” she said.

They forage in both freshwater and saltwater areas, eating a variety of fish and other animals. On Whidbey Island, the otters have eight lakes and 200 miles of shoreline to choose from.

Island compares their use of different habitats for different meals to how people go to multiple stores to do their shopping.

“It’s like trying to understand our choices when we go to the grocery store,” Island said. “How do they choose to move from freshwater to saltwater?”

The answers could reveal environmental pressures.

Island is in the second year of a five-year study on Whidbey Island.

The study aims to determine what the otters eat, how they get their food and what pollutants they are exposed to.

Island said she envisions eventually expanding her research throughout Northwest Washington, including into Skagit County.

She said what she learns about Whidbey Island otters might also apply to otters in Skagit County, such as those in the Anacortes area and Padilla Bay, because they share the waters of the Salish Sea.

Earlier studies of the region’s otters have found they sometimes move between islands throughout the region, including in Island, San Juan and west Skagit counties.

A 2014 study by Western Washington University researchers and the state Department of Fish & Wildlife examined the diets of otters on Fidalgo, San Juan and Orcas islands by using feces collected in 2008.

Those researchers found that fish were the otters’ primary food.

Fidalgo Island otters were unique in their consumption of Dungeness crab, which was found in 19% of the feces collected, according to that study.

For the first year of Island’s study — August 2018 through September — she searched for otters nearly round-the-clock in order to determine where they’re found and whether they move around during different seasons.

She watched in person and by using wildlife cameras, and gathered their feces wherever she found a fresh dropping.

“I devoted 100% of my time for a whole year to stalking otters,” she said. “It took me about three months just to figure out where to go.”

Island is so in tune with them that she jolts awake when they’re active in the middle of the night near her local lodgings.

“I’ve gotten to a point where I’m sleeping like a new mother. If I hear them, I’m out of bed,” she said, adding that otters use a variety of chirps, barks, hisses and growls to communicate.

During the first year of the study, Island identified 12 main sites the otters use. Those areas are on public lands, including area state parks, as well as on property the Whidbey Camano Land Trust and residents have allowed Island to access.

So far, otter droppings have revealed they eat a variety of fish, and when they can get their hands on them, amphibians, birds and mammals. Sculpin and flatfish — both slow-moving, bottom-dwelling fish — were some of the most common food sources as evidenced by bones and scales in the feces.

“The sculpin just sit there. You could grab one,” said Island, who did scuba diving to observe the otters’ underwater habitat and confirm the species of fish seen in their feces.

Because she wants to learn more about otter eating habits and the environment, Island is far from done collecting feces and the other, nastier, waste product otters leave behind.

The digestive mucus is a gooey yellowish substance Island has found with about one of every 10 droppings, Island said. Why otters produce it, how often and how are some of the mysteries Island is excited to investigate.

“Oh look at this one — Yay!” Island said when she found a slimy deposit on a trail at Fort Ebey State Park. “This is what I hope for.”

She said the substance may help protect the digestive tract because the otters eat prickly things such as stickleback fish.

Using the mucus samples, Island hopes to start delving into the genetics of the otters in partnership with another Pacific University researcher, Lauren Chan.

Through DNA analysis, Island said they should be able to pinpoint how many otters are leaving the mucus behind and get some sense of the range of those animals.

Eventually, the digestive mucus will also be used to look at the animals’ exposure to pollutants. Island said she’s particularly interested in looking for signs of chemicals referred to as PCBs, which are known to accumulate in Southern Resident orca whales as they eat contaminated salmon.

“We know that’s a real problem for our resident orcas here,” Island said. “What is that doing for a species that is really fluid in its food choices?”

She may also look for PFAS, a group of chemicals known to be in groundwater near Naval Air Station Whidbey Island.

So far, it’s a good sign the otters are in the area at all because they’re considered a species indicative of environmental health.

“They’re an indicator species because of the fact that they’re one of the first to be affected ... if they are contaminated,” Island said. “They’re vulnerable to changes in the environment.”

Many questions remain about what otters can tell us about themselves and their habitat, and Island has ambitious goals for the next few years.

For now, she continues gathering feces — and mucus — and looking for the otters’ sleek bodies moving among the brush or gliding through the water.

An international nonprofit with the goal of establishing the first whale sanctuary in the world is eyeing a location in Skagit County.