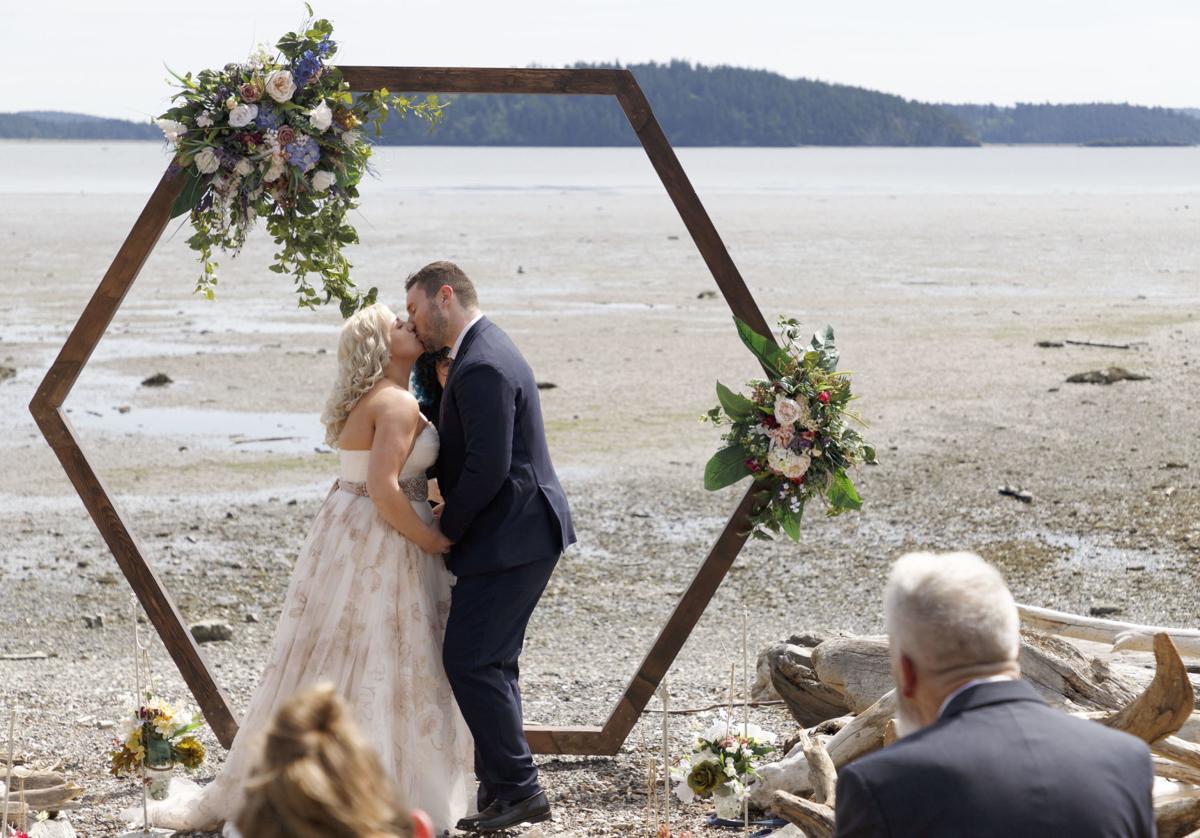 Chelsi Nicholas and Daniel Boze kiss after their wedding ceremony May 9 in Anacortes. 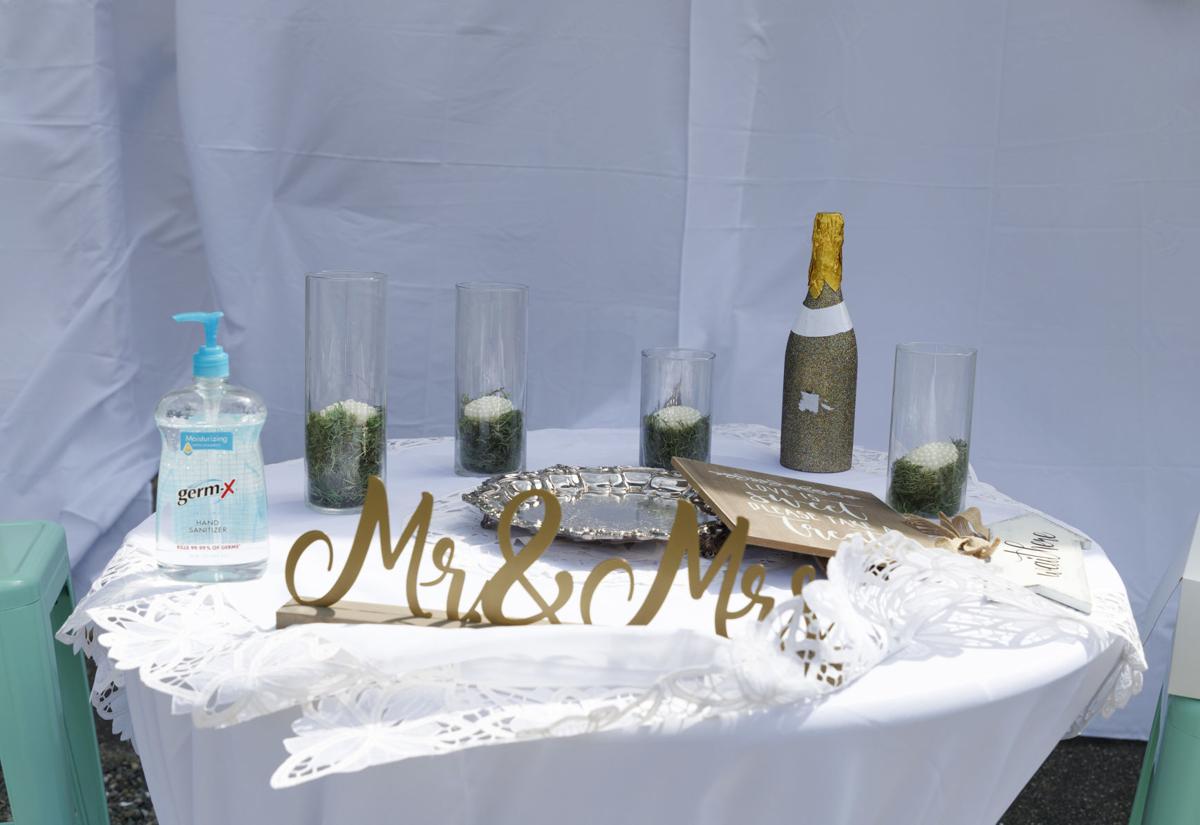 A table set up with decorations and hand sanitizer at a wedding May 9 in Anacortes. 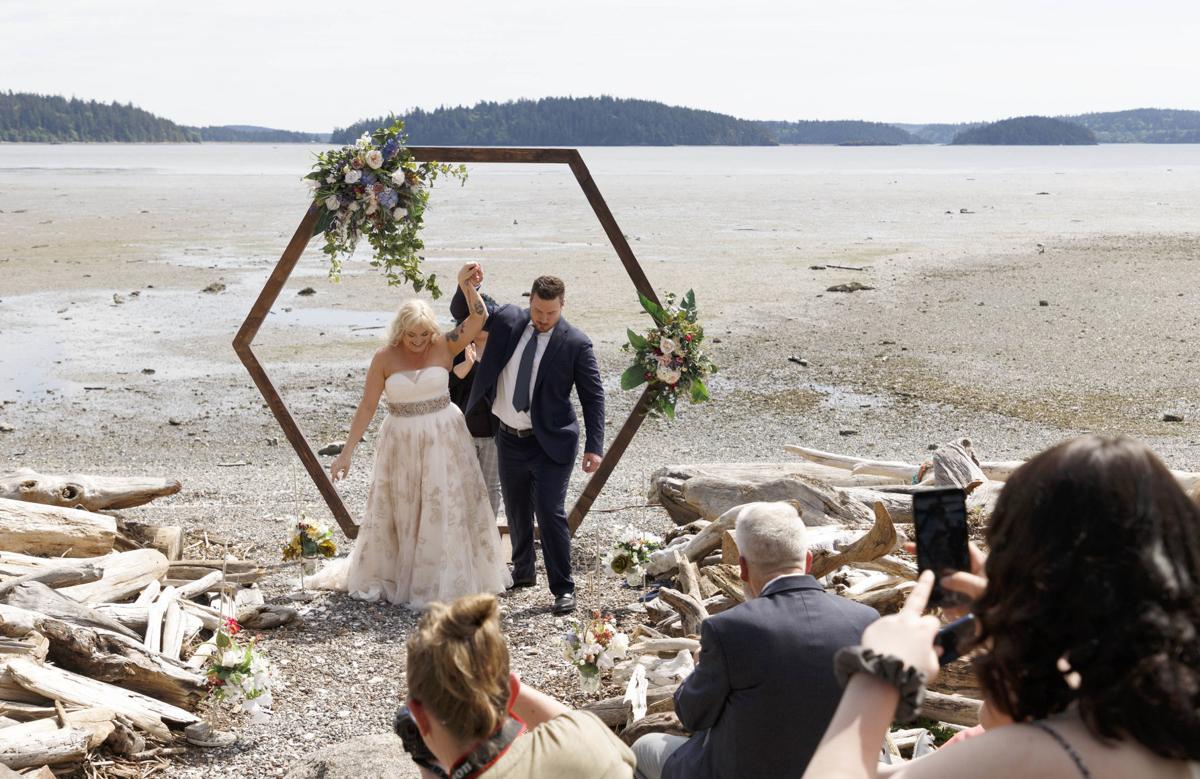 Chelsi Nicholas and Daniel Boze celebrate after their wedding ceremony May 9 in Anacortes.

Chelsi Nicholas and Daniel Boze kiss after their wedding ceremony May 9 in Anacortes.

A table set up with decorations and hand sanitizer at a wedding May 9 in Anacortes.

Chelsi Nicholas and Daniel Boze celebrate after their wedding ceremony May 9 in Anacortes.

In some ways, the wedding of Chelsi Nicholas and Daniel Boze earlier this month carried the long-established symbols of the ceremony: the rings, the wedding dress, the picturesque setting.

But even with Similk Beach in the background, there were signs of a different era: seats spaced 6 feet apart, a bottle of hand sanitizer sitting on a table and a very short guest list.

As the COVID-19 pandemic continues and individuals navigate new restrictions on their lives, brides and grooms scheduled to be married this summer have had to either postpone or greatly alter plans for their big day.

Nicholas, who met her husband about three years ago, originally planned a larger wedding with a well-populated reception.

When COVID-19 spread, she saw signs of its effects everywhere, from a funeral carried on the radio to a “parade” of cars to mark a neighbor’s birthday. She knew her wedding would have to change, too.

Her resulting small ceremony was held outdoors, and some well-wishers drove by in cars decorated with streamers and posters after the ceremony ended.

“We’re making the best of everything,” Nicholas said.

She said she loved many of the details throughout the day, from the first dance to an Ellie Goulding song to the familiar faces in the car parade. She said she hopes there can still be a larger gathering later this year.

“When everything clears up, we’re hoping to celebrate the right way,” she said.

Instead, they ended up with about a dozen people at their wedding at Skyline Marina in Anacortes in March before Gov. Jay Inslee’s “Stay Home, Stay Healthy” order was issued. Their honeymoon originally got pushed back, then canceled outright, although they hope to reschedule.

“Everything was up in the air. In the situation we had, it probably worked out as well as it could have,” Fosso said. “It was still a great day. We made the best of everything.”

Weiringa said the ceremony was “beautiful” but said she was disappointed it could not include the groomsmen and bridesmaids. They hope to gather for pictures later.

Mount Vernon’s Andrea Garcia said her full-scale wedding, originally scheduled for late this month, has been postponed to late July, when she hopes Washington will be in “Phase Four” of Inslee’s COVID-19 recovery plan. That phase will allow for gatherings of more than 50 people.

In the meantime, she and her fiancé plan on a short outdoor ceremony to sign the wedding license.

The change in plans was inconvenient for family members, some of whom planned to travel from their homes outside the country.

She’s still looking on the bright side.

“I hope couples don’t lose excitement over their special day and have patience knowing everything is going to be OK,” she said. “Their wedding day will be even more amazing and beautiful than they ever imagined, and they sure will have an interesting story about their 2020 wedding.”

As of 3:37 p.m. Saturday, Skagit County had confirmed 426 cases of COVID-19, including 49 who are hospitalized or have been hospitalized and 14 who have died.

A total of 238 people have recovered from the disease.