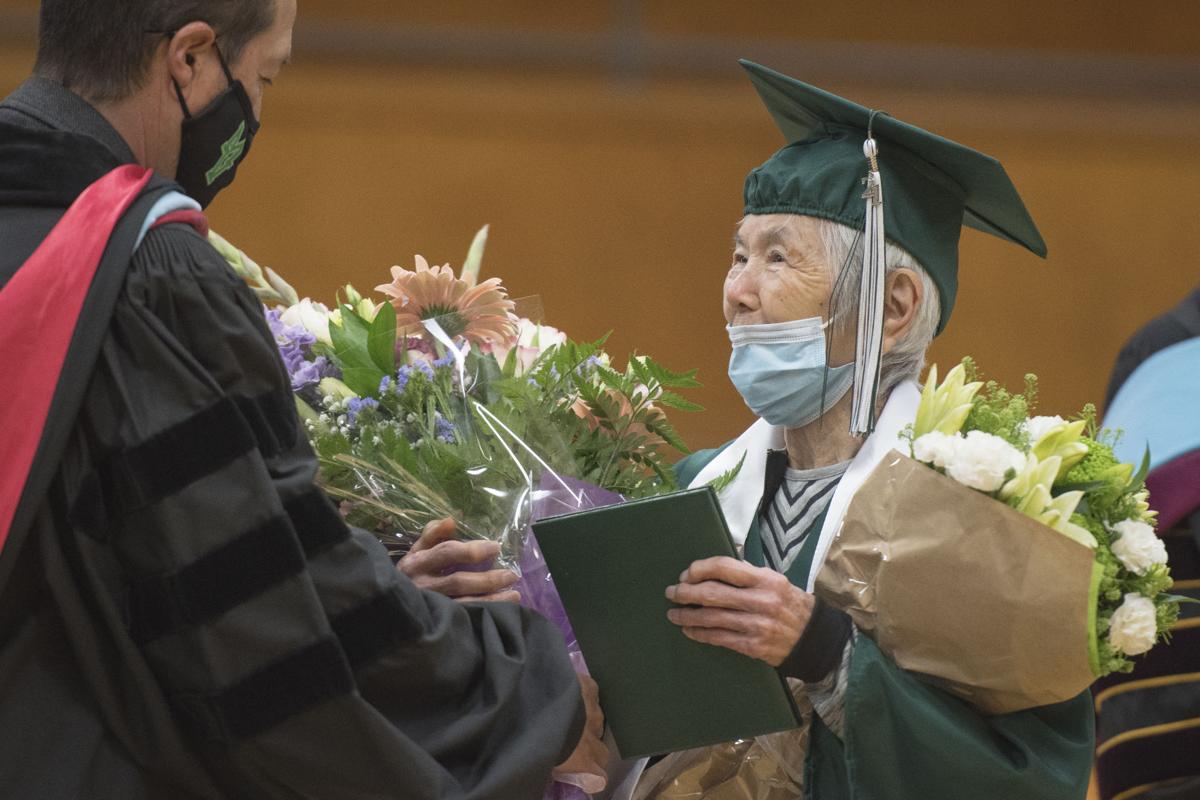 Hanna Semba, a Japanese American woman who was sent to internment camps during World War II, receives an honorary diploma Monday from Mount Vernon School District Superintendent Ismael Vivanco. Semba, who grew up in Conway, was a sophomore at Mount Vernon High School when she was taken to camps in California and Wyoming. 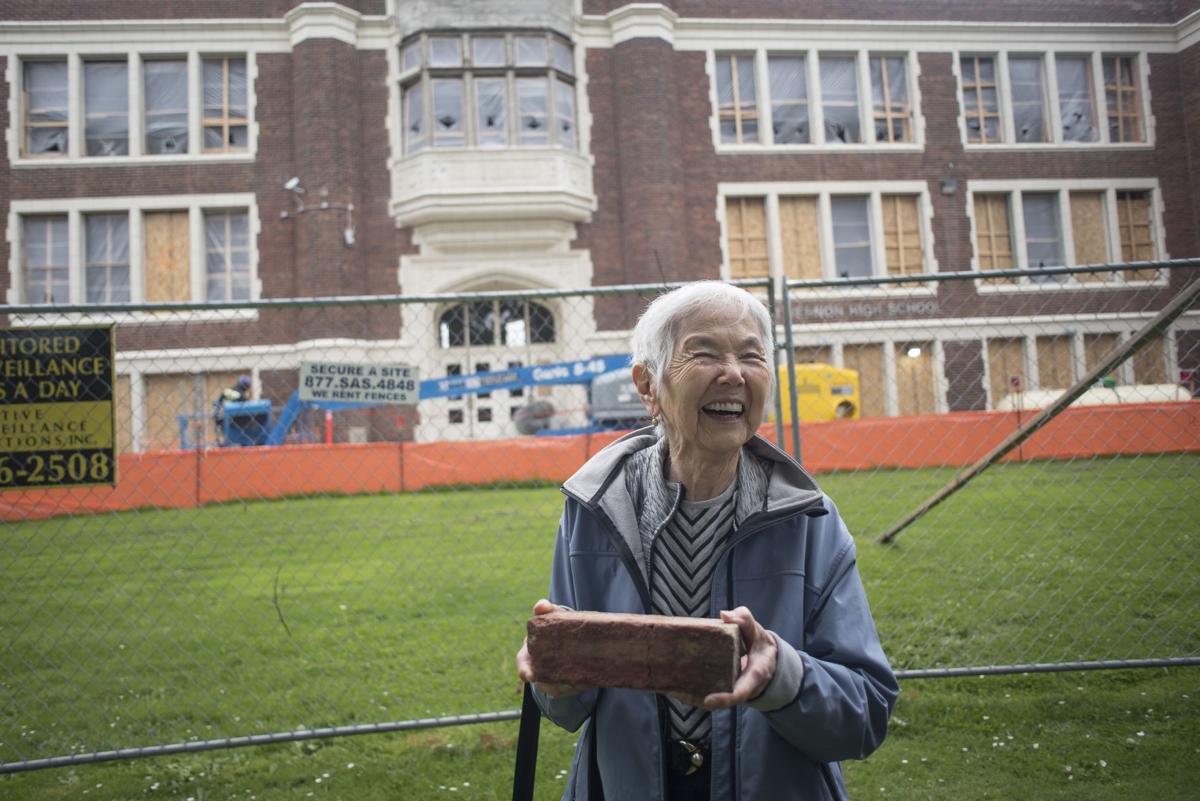 Hanna Semba laughs as she holds a brick Monday from Mount Vernon High School’s Old Main building. After turning 95 in March, Semba told her son she wanted to travel from Minnesota to Skagit County to see where she went to high school. 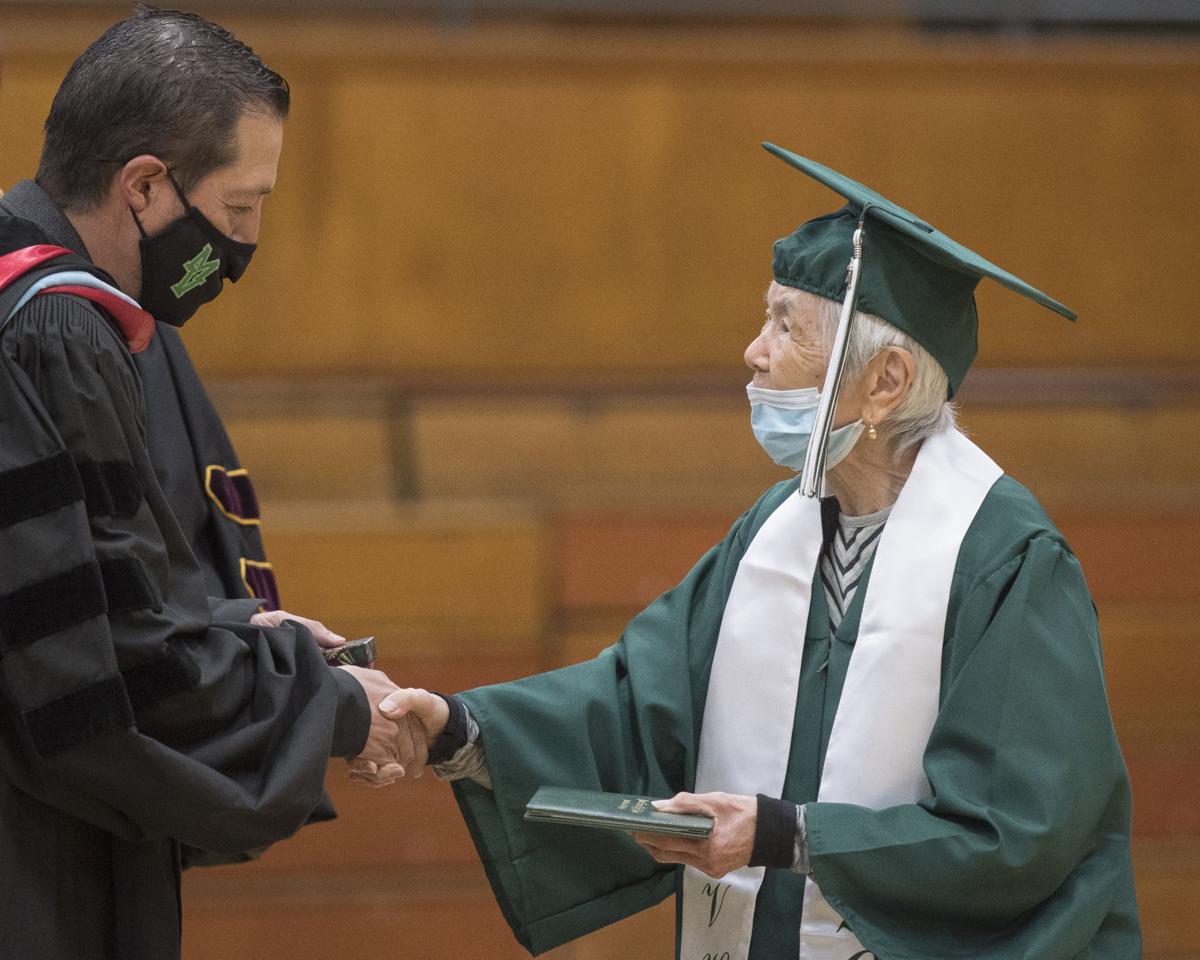 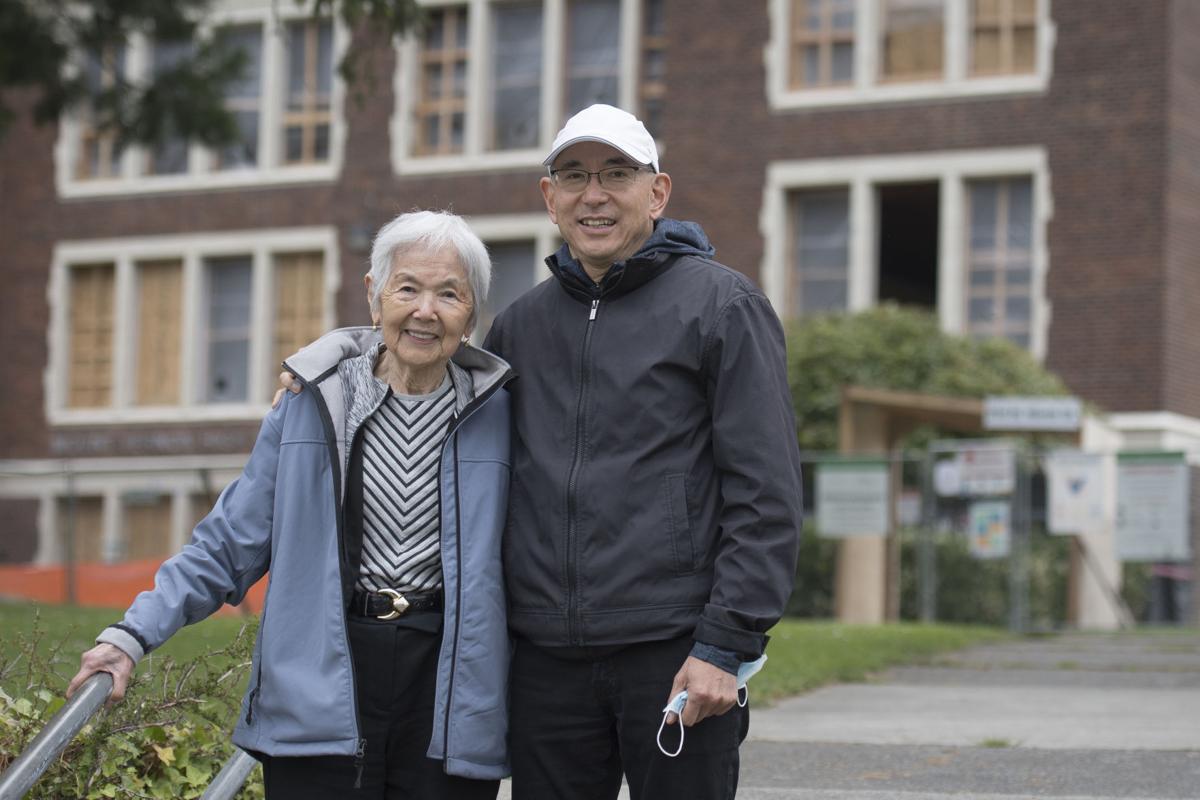 Hanna Semba, a Japanese American woman who was sent to internment camps during World War II, receives an honorary diploma Monday from Mount Vernon School District Superintendent Ismael Vivanco. Semba, who grew up in Conway, was a sophomore at Mount Vernon High School when she was taken to camps in California and Wyoming.

Hanna Semba laughs as she holds a brick Monday from Mount Vernon High School’s Old Main building. After turning 95 in March, Semba told her son she wanted to travel from Minnesota to Skagit County to see where she went to high school.

MOUNT VERNON — Although there are a few weeks left in the school year, the Mount Vernon School District on Monday held a very special graduation — one more than seven decades in the making.

During the 1941-42 school year, 15-year-old Hanna Hayano Semba was in the Mount Vernon High School orchestra, helped with the yearbook and was a “focused student who excelled in science,” Mount Vernon School District Superintendent Ismael Vivanco said.

“She was truly a Bulldog scholar,” Vivanco said.

That changed in February 1942, when President Franklin Roosevelt signed Executive Order 9066, which forced Japanese Americans such as Semba and her family from their homes and into internment camps in places such as California and Wyoming.

“That was a very tough time,” Semba said. “I had to leave my friends. I didn’t know why. I hadn’t done anything.”

Semba, the only Japanese American student in her sophomore class at Mount Vernon High School, and her older sister Mary Hayano Kuora, a senior at the time, didn’t get to graduate with their classmates.

Kuora was allowed to receive her diploma, but was not allowed to attend graduation, a wrong corrected by the Mount Vernon High School class of 1992 when it invited Kuora to participate in its graduation.

Semba, however, finished high school in the internment camps in which she was forced to live — first at Tule Lake in California and then at the Heart Mountain Relocation Center in Wyoming.

Semba, who attended Conway School before moving on to Mount Vernon High School, recalled the culture shock she experienced when she got on the train in downtown Conway headed toward her first camp.

After spending her childhood in the farmland of the Skagit Valley where she and her family were some of the few people of Japanese descent, she suddenly found herself surrounded by those who looked like her, but because she didn’t know how to speak Japanese had no way to communicate with them.

Eventually, the family settled in Minnesota, where Semba, now 95, still lives. She married Thomas Semba, who also was forced into the internment camps, and went on to have four children, all of whom became physicians.

When she celebrated her birthday in March, she mentioned to her son Charles Semba that she would like to visit Mount Vernon and Conway again, Charles Semba said. The pair planned a trip for what Hanna Semba thought would be a quick glimpse of her old school, he said.

Instead, the school district took the opportunity Monday to “right a wrong,” Vivanco said, presenting Hanna Semba during a small, physically-distanced ceremony with the cap, gown and diploma she had missed out on 77 years ago.

“We just came in and thought, ‘Oh, we’ll see and we’ll go,” Semba said after the ceremony. “We were just going to take a peek, and then the crowd grew and grew. This has been very, very pleasant. It brings back sweet memories.”

While state law and Mount Vernon School District policy allow the district to award high school diplomas to students who instead of graduating enlisted in the military during World War II, the Korean War and the Vietnam War, it does not provide for those such as Semba.

Her visit spurred the district to change its policy to include Japanese Americans sent to internment camps, Vivanco said.

“Even though we might not have another Hanna, I think it’s a good thing to have in our (school) history to be able to right that wrong,” he said.

When Mount Vernon High School Principal Terri Wattawa first began corresponding with Charles Semba, she said she knew she wanted to do something special for Hanna Semba other than just allowing the Sembas to visit the campus.

Although current students could not attend the ceremony, Wattawa said she hopes they will learn from the event, which was recorded by the school.

“This is a good opportunity for us to take the history of our parents, of our grandparents, and recognize impacts that are still felt today,” she said.

Wattawa said the lesson is that while sending Japanese Americans to internment camps might have seemed the right thing to do in 1942, decisions should not be made out of fear.

“We have to be thoughtful about the decisions that are made,” she said.

Although her life was changed by Roosevelt’s decision, Semba looks back on her time in Conway and Mount Vernon in a positive light.

“Many, many people were sympathetic about the fact we had to leave,” she said.

Seated in the school’s gymnasium in her Bulldog green graduation gown, Semba recounted a time when her Conway School principal, while on a trip to Minnesota to visit family, tracked her down to reconnect.

“It meant a great deal to us to know we still had friends (in Mount Vernon),” she said.

The Mount Vernon district is in the midst of remodeling the high school’s Old Main building, which is the only building still standing from when Semba attended the school.

While the memories of her time at Mount Vernon High School have stayed with her for decades, when she returns to Minnesota on Tuesday, she will do so with a piece of the building — a brick that was gifted to her by the construction crew.