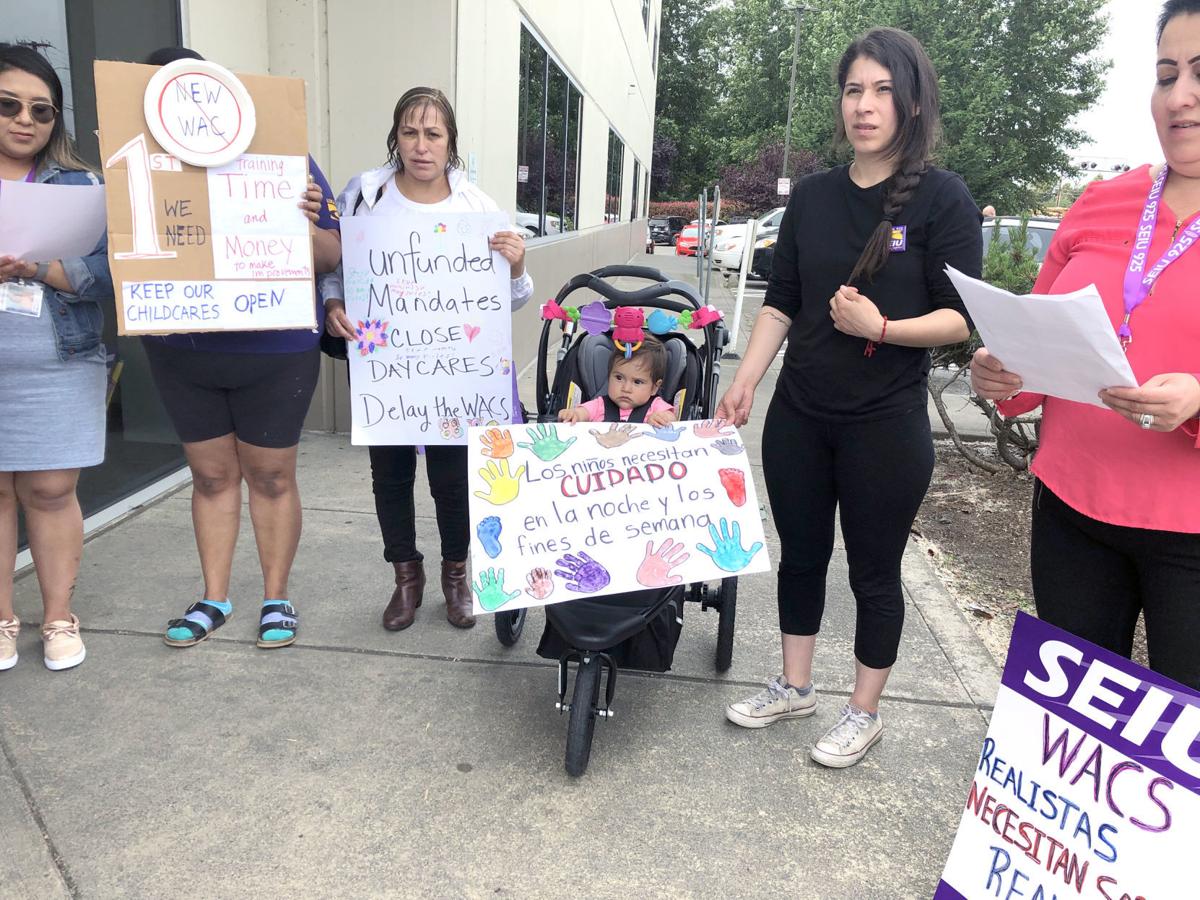 Bianca Valles (right) and her 1-year-old daughter Anahi Farias rally with others Tuesday outside the Department of Children, Youth and Families office on College Way in Mount Vernon. 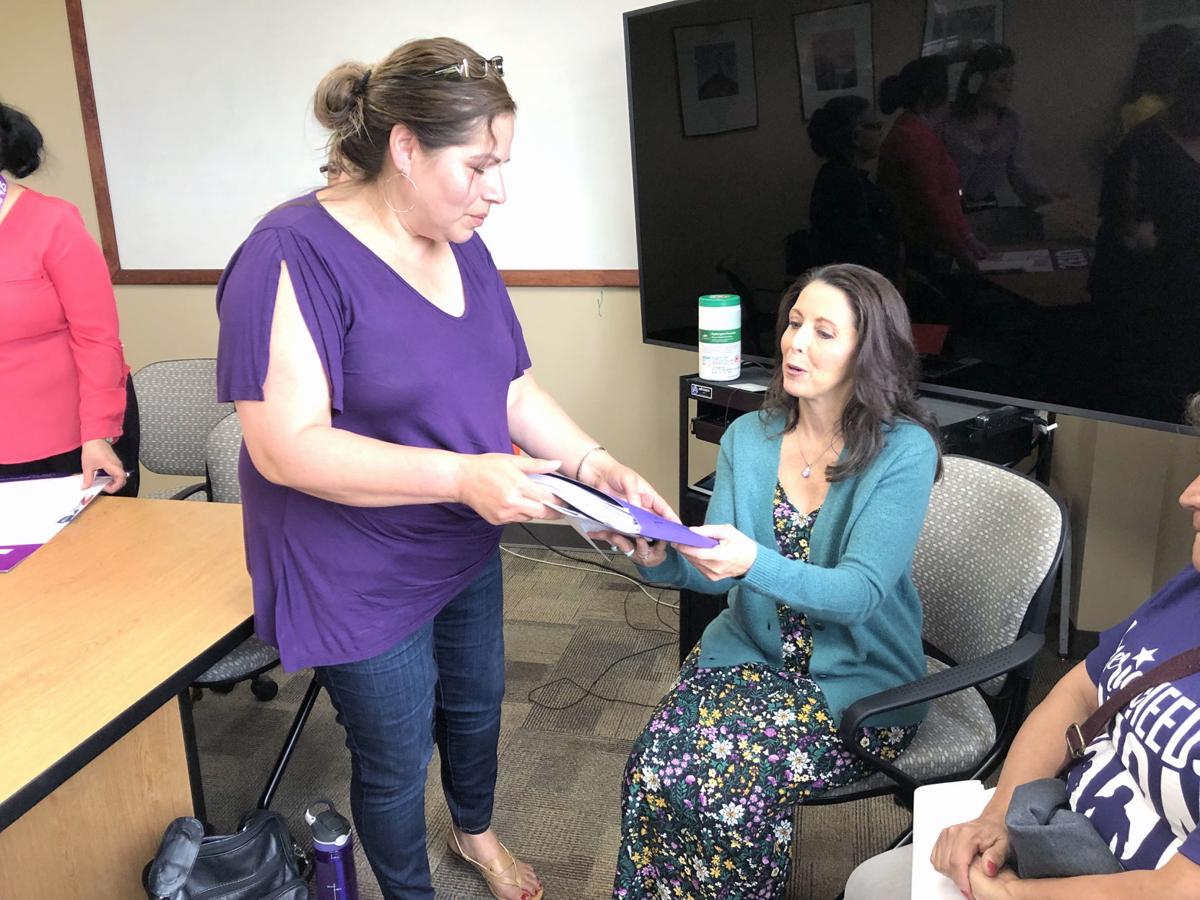 Maria Elena Nava (left), an in-home child care provider in Mount Vernon, presents a folder with 1,000 signatures in it to Department of Children, Youth and Families regional administrator Brenda Martinez on Tuesday at the department's office on College Way in Mount Vernon.

Bianca Valles (right) and her 1-year-old daughter Anahi Farias rally with others Tuesday outside the Department of Children, Youth and Families office on College Way in Mount Vernon.

Maria Elena Nava (left), an in-home child care provider in Mount Vernon, presents a folder with 1,000 signatures in it to Department of Children, Youth and Families regional administrator Brenda Martinez on Tuesday at the department's office on College Way in Mount Vernon.

MOUNT VERNON — With just weeks to go before new regulations regarding certification for child care professionals take effect, some local providers on Tuesday rallied for change.

“Implementing this will add to the child care desert in Skagit County,” said Barbara Guillen, who co-owns Leo’s Stepping Stones Preschool and Childcare in Mount Vernon.

Hoping to have their concerns heard, Guillen, her business partner Caritina Gonzalez, as well as other child care providers and supporters delivered a petition they said had 1,000 names on it to state Department of Children, Youth and Families regional administrator Brenda Martinez at the department’s College Way office.

After a months-long process with multiple interest groups, the state has put new education requirements on those working in child care centers and in-home daycare facilities, which go into effect on Aug. 1, Martinez said.

While those changes are designed to improve the quality of care youth receive, some providers foresee them causing additional struggles to the hardships they already face.

“You have one of the hardest jobs out there,” Martinez said. “Yet, one of the most important for our young citizens.”

The new rules require all lead teachers who are allowed to be unsupervised with children to have at least an introductory Early Childhood Education certificate. After that, they must progress to more advanced levels of those certificates.

While the coursework required to obtain those certificates is offered at places like Skagit Valley College, the state did not include additional funding for people already in the profession to go back to school to earn those certificates, said Sylvia Alvarez, center director for Dual Language Early Learning Center in Mount Vernon.

“It feels like they’re setting us up to fail,” she said.

Without that help, many providers can’t afford to subsidize their teachers’ education, nor can they afford to pay higher wages so their staff could do so on their own, the group said.

Plus, once their teachers receive those certificates, they are eligible for higher paying jobs elsewhere, leading to retention issues, Guillen said.

“We struggle all the time to hire people,” Guillen said.

As a result, the group worried, centers and in-home provider locations would close, exacerbating the lack of child care in Skagit Valley.

According to a May report from Child Care Aware of Northwest Washington, 58% of children with parents who work full time in Skagit County don’t have access to licensed child care, the Skagit Valley Herald previously reported. Child care availability fell by 6% from 2013 to 2018.

The department has not yet seen a higher-than-normal rate of closure, Martinez said.

“We don’t want folks to close,” she said.

Providers have five years to comply with the new regulations, Martinez said.

Some, but not all, of the training is offered for free online, she said. But those trainings are not yet provided in Spanish, creating an additional barrier to some local providers.

“I hear their concerns,” Martinez said.

The group is hoping to either delay implementation of the new regulations, or receive additional funding to help them meet them.

“It’s not that we don’t want to comply with the new rules, we just need more time and funds,” Gonzalez said.