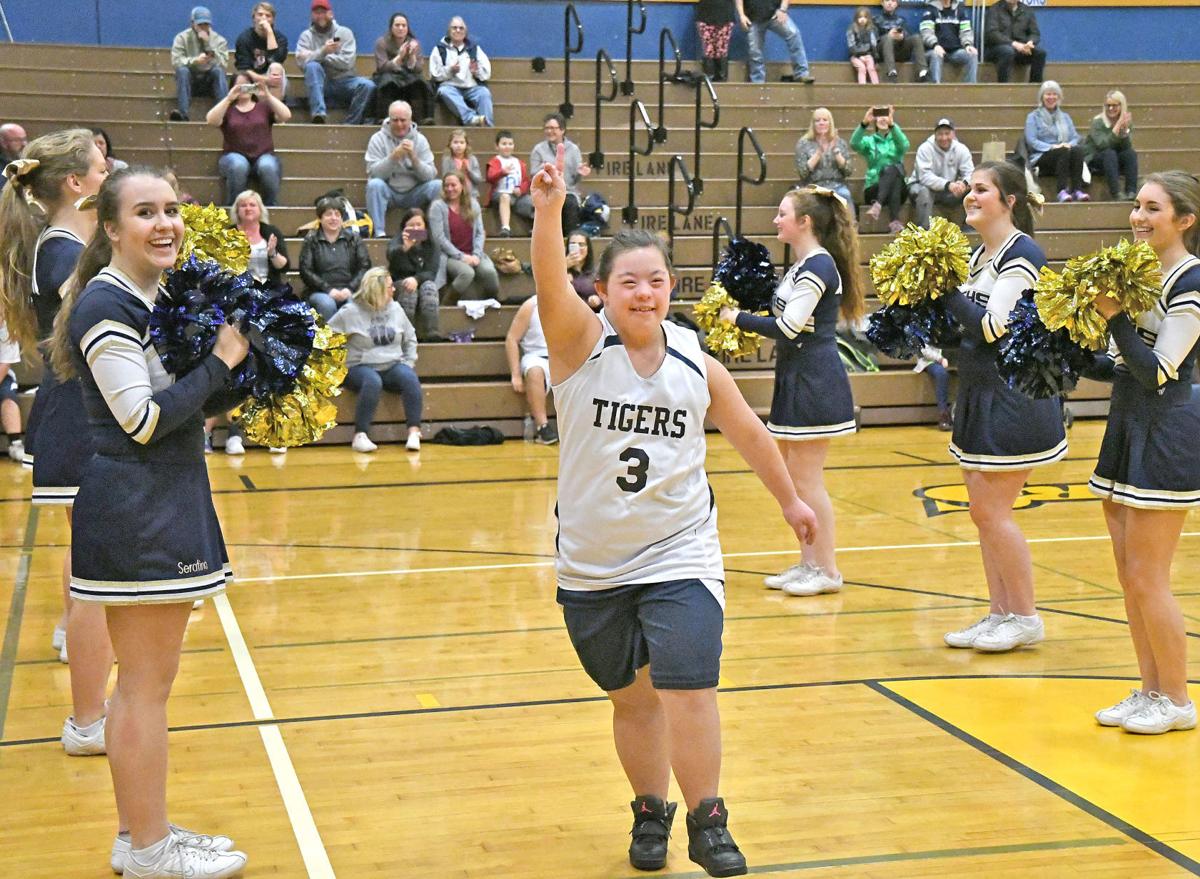 Burlington-Edison Unified player Kayla Bryant makes the most of her introduction Thursday night. 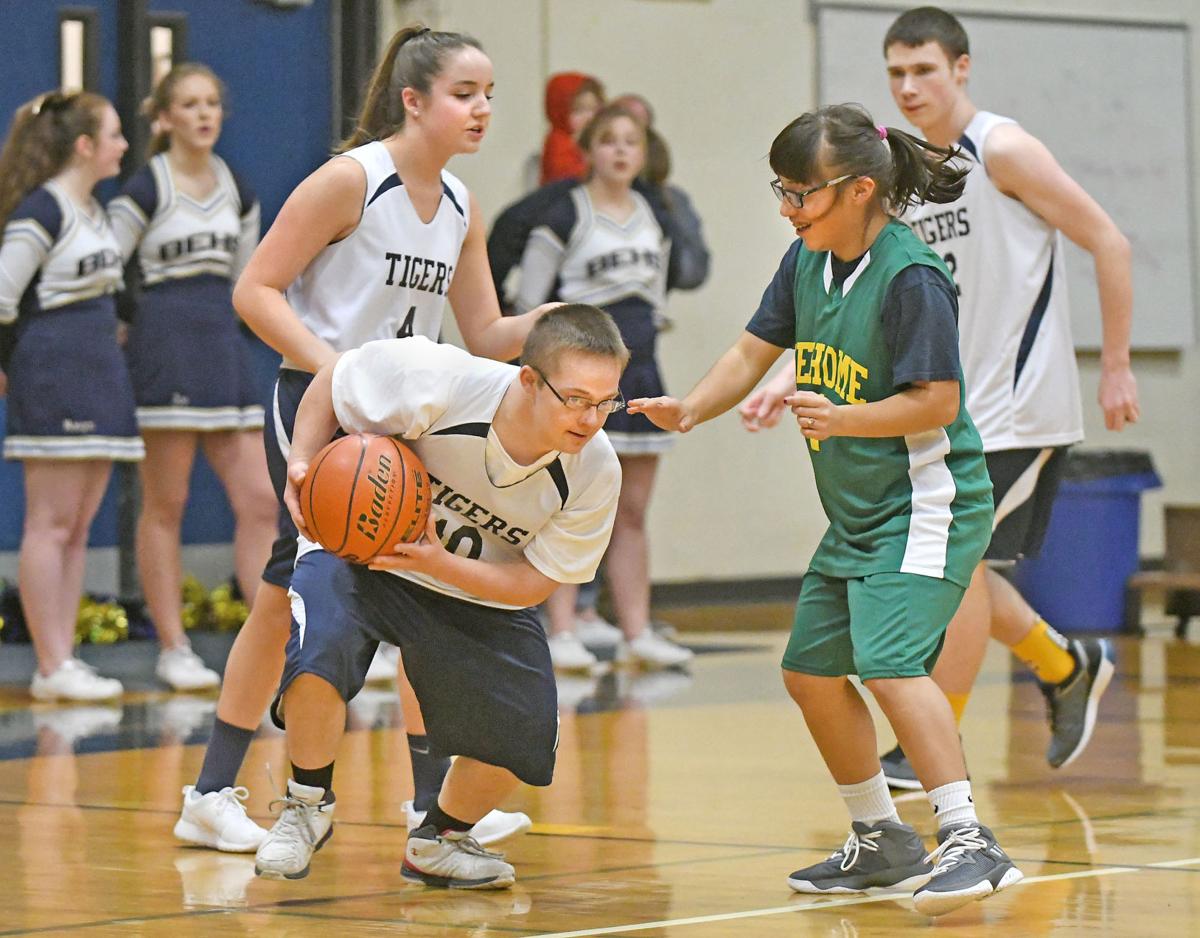 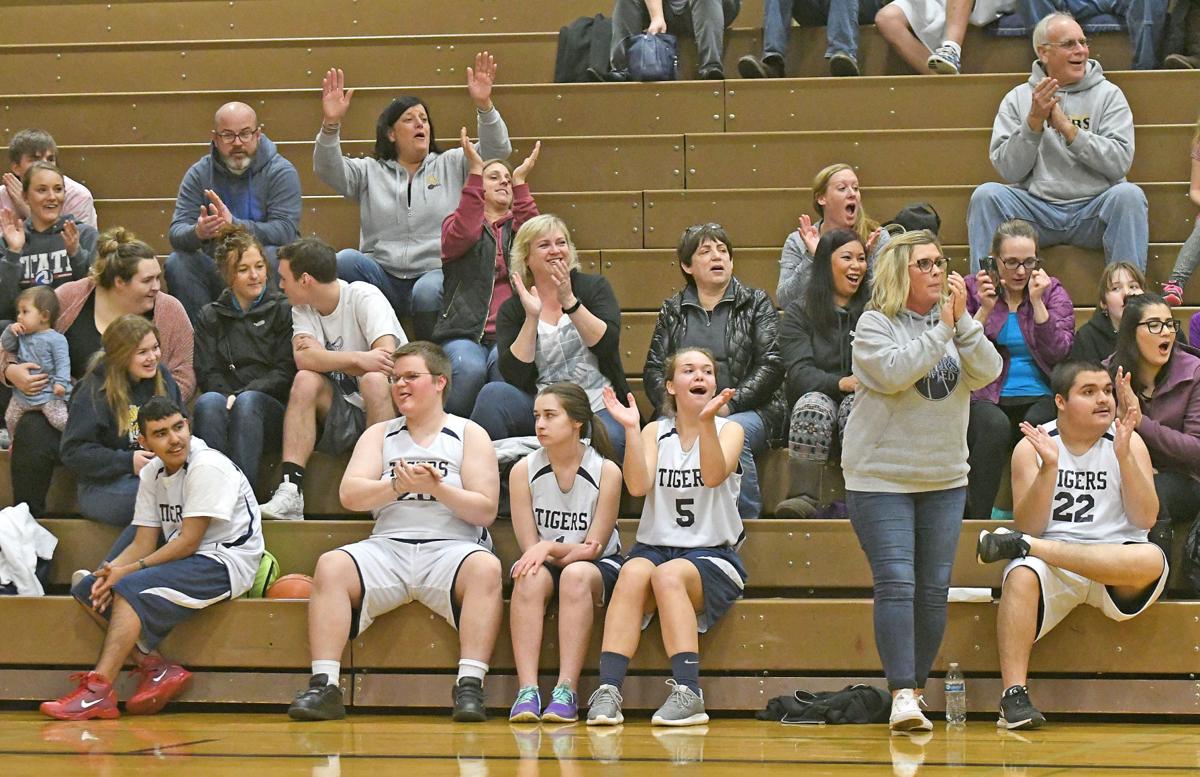 The Burlington-Edison Unified bench and fans celebrate a basket Thursday. 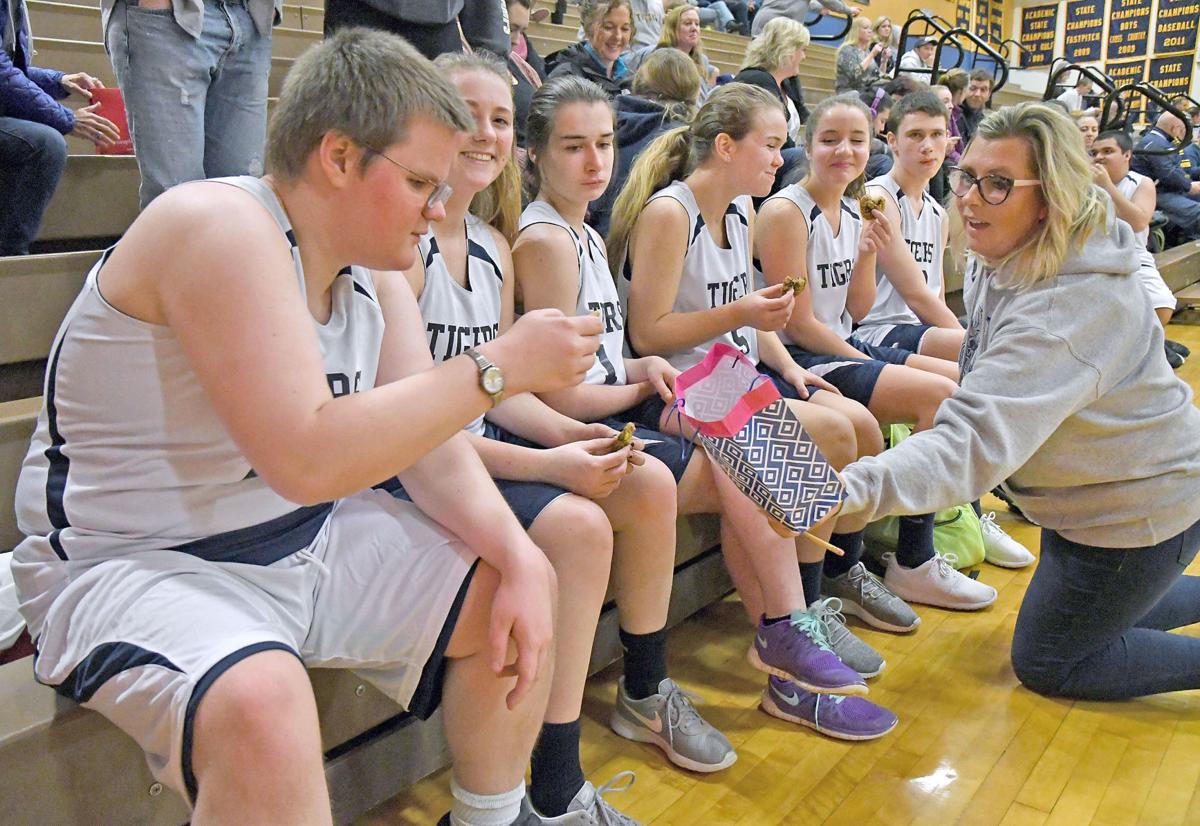 Burlington-Edison Unified coach Noelle Jacobson hands out cookies during a break between games. 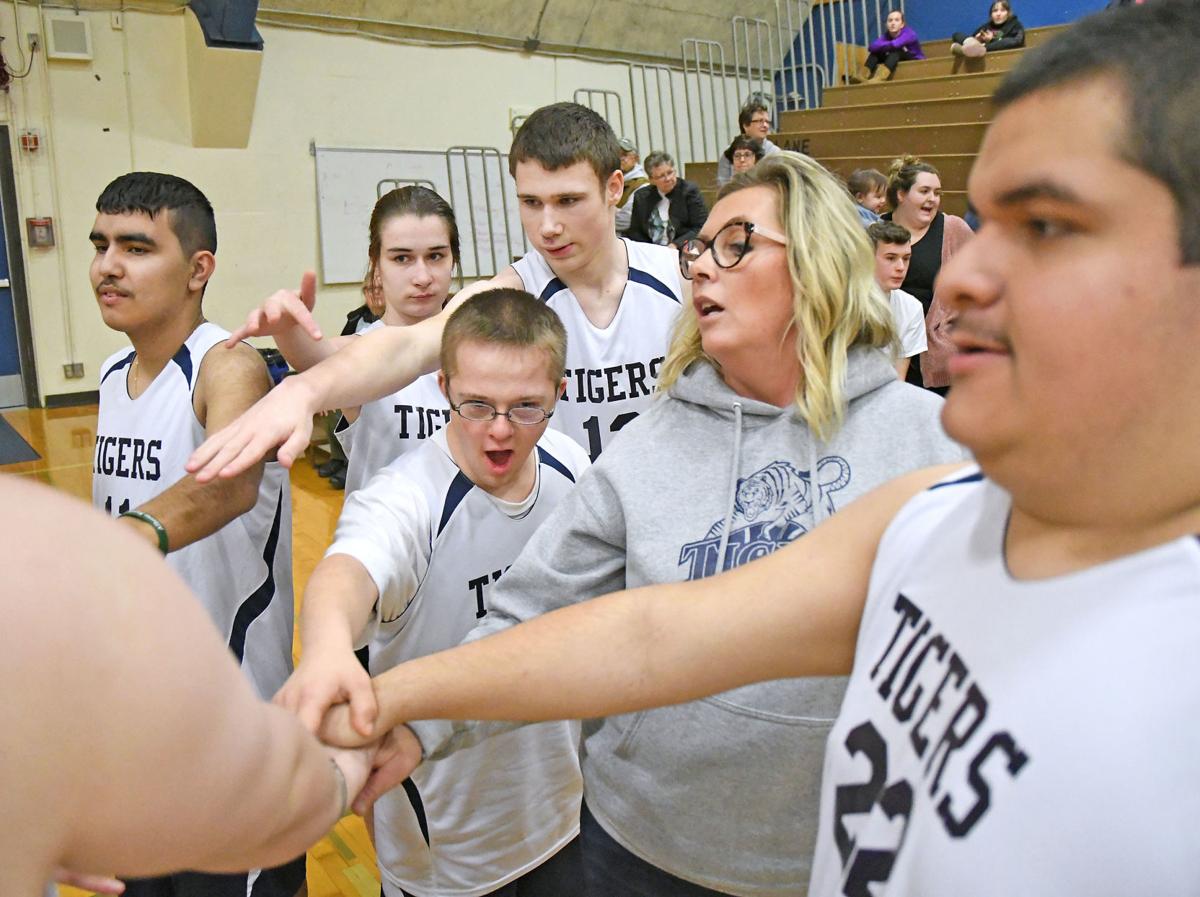 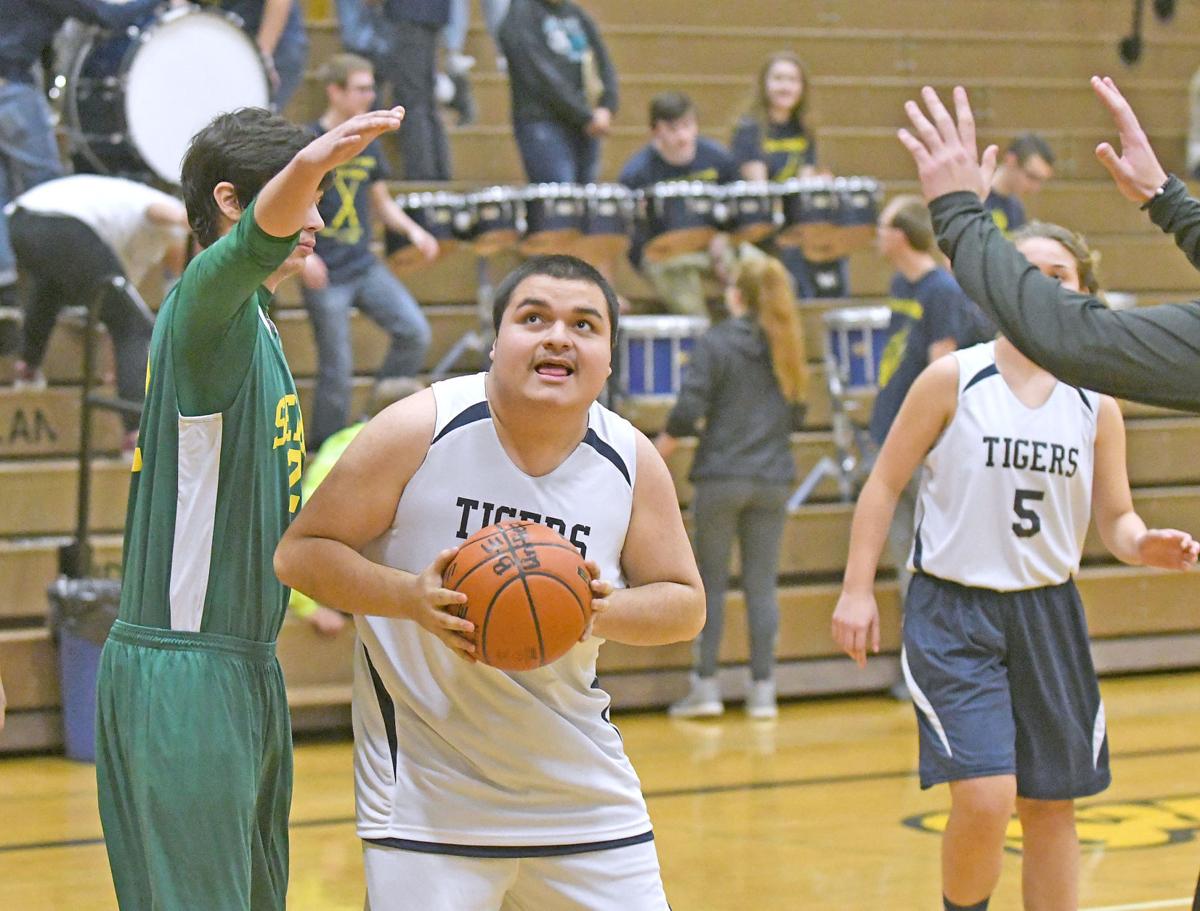 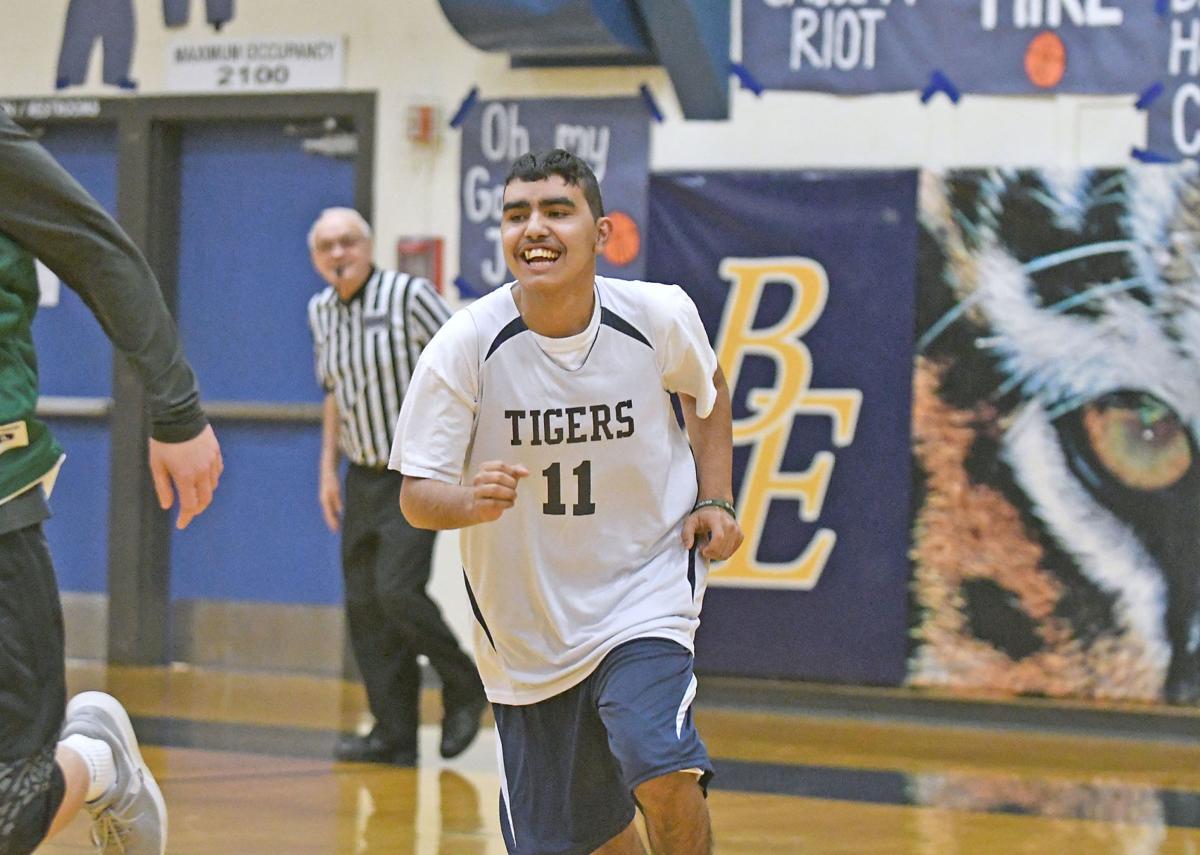 Burlington-Edison Unified player Juan SantaCruz Villanueava is all smiles after hitting a basket.

Burlington-Edison Unified player Kayla Bryant makes the most of her introduction Thursday night.

The Burlington-Edison Unified bench and fans celebrate a basket Thursday.

Burlington-Edison Unified coach Noelle Jacobson hands out cookies during a break between games.

Burlington-Edison Unified player Juan SantaCruz Villanueava is all smiles after hitting a basket.

BURLINGTON — The band played rousing favorites. The cheerleaders broke out in celebration after a shot hit nothing but net. A team mounted a comeback in the final minute of play.

But the set of games between the Burlington-Edison Unified team and two opponents was something new: a chance to bring players with and without special needs together to play basketball.

The first-year team is an extension of what area high schools call unified programs, which started several years ago with soccer teams. The soccer teams are still active, with Burlington-Edison and Mount Vernon among those in the region fielding teams, but Burlington-Edison decided to start a basketball team this year.

“We started with soccer, and kids showed an interest (in basketball),” coach Noelle Jacobson said. “It’s hard to get gym time, but we were able to get it this year. It’s been super fun.”

The team’s roster pairs special needs players with partners — students who volunteer to play in the games, guide their teammates and provide support. The players take most of the shots, but it’s a fun experience for the partners as well.

“I love being there for support. I love making them happy,” said Tessa Ross, who with Allegra Peterson and Ashley Gabor served as partners in the team’s two games last week.

Jacobson said the experience doesn’t end for the partners when they step off the court.

“You wouldn’t believe the friendships they get. It’s a quick way for them to become friends,” she said. “It joins them together. ... Everyone knows everyone and they treat them like they’d treat any of their friends.”

Jacobson said the school’s unified soccer program started in 2014, and it faces opponents including Mount Vernon.

Burlington-Edison has the only unified basketball team in Skagit County, playing opponents from Whatcom County, as well as Mariner High School in Everett, the site of a recent road trip for the Burlington-Edison team.

Unified games are typically 20 minutes long, with a running clock and a heavy emphasis on fun.

During one of last week’s games, a player who hadn’t scored missed a short shot. His opponent, who had grabbed the rebound, tossed the ball back to him for a second try.

When he connected, there were cheers from both teams.