Ross Dam, one of three dams operated by Seattle City Light on the Skagit River, towers 540 feet above Diablo Lake in June 2016. At right is the powerhouse. 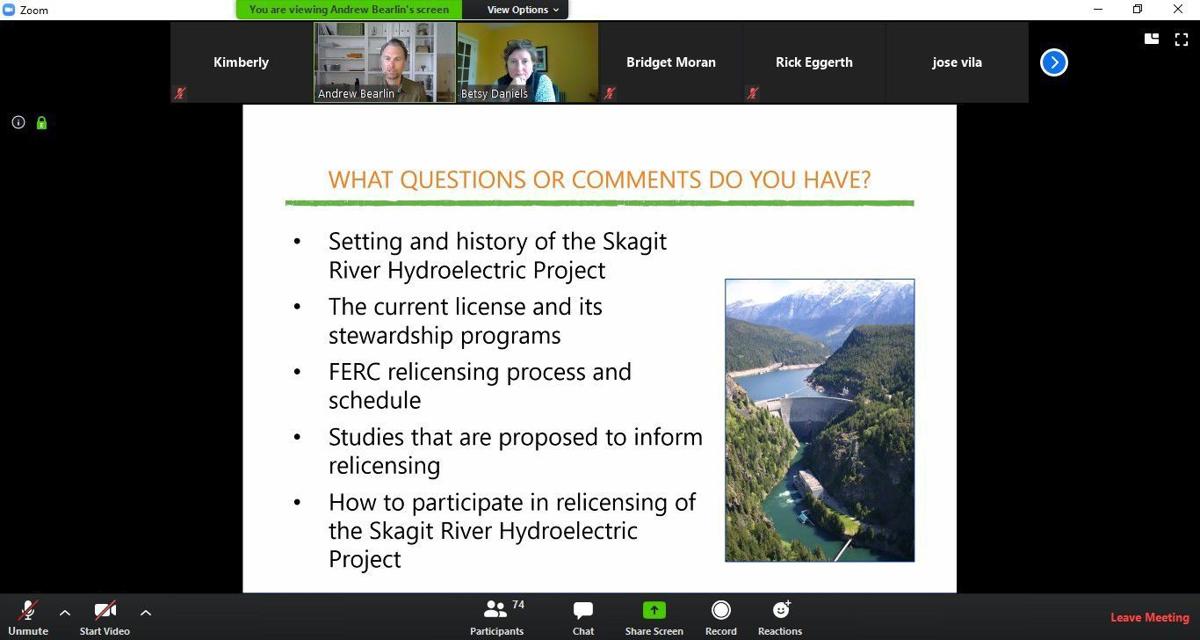 Andrew Bearlin and Betsy Daniels of Seattle City Light lead a meeting Thursday on Zoom about relicensing of the Skagit River Hydroelectric Project. 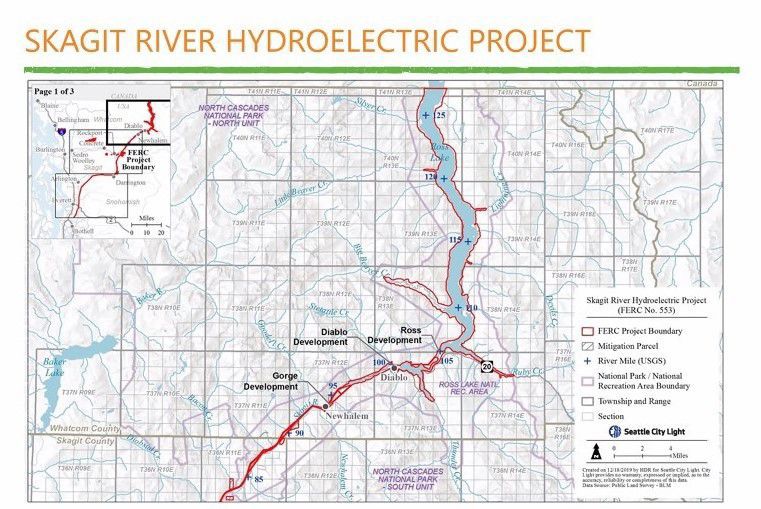 The Skagit River Hydroelectic Project consists of three dams between the Canadian border and Newhalem. Transmission lines carry the electricity to Seattle. 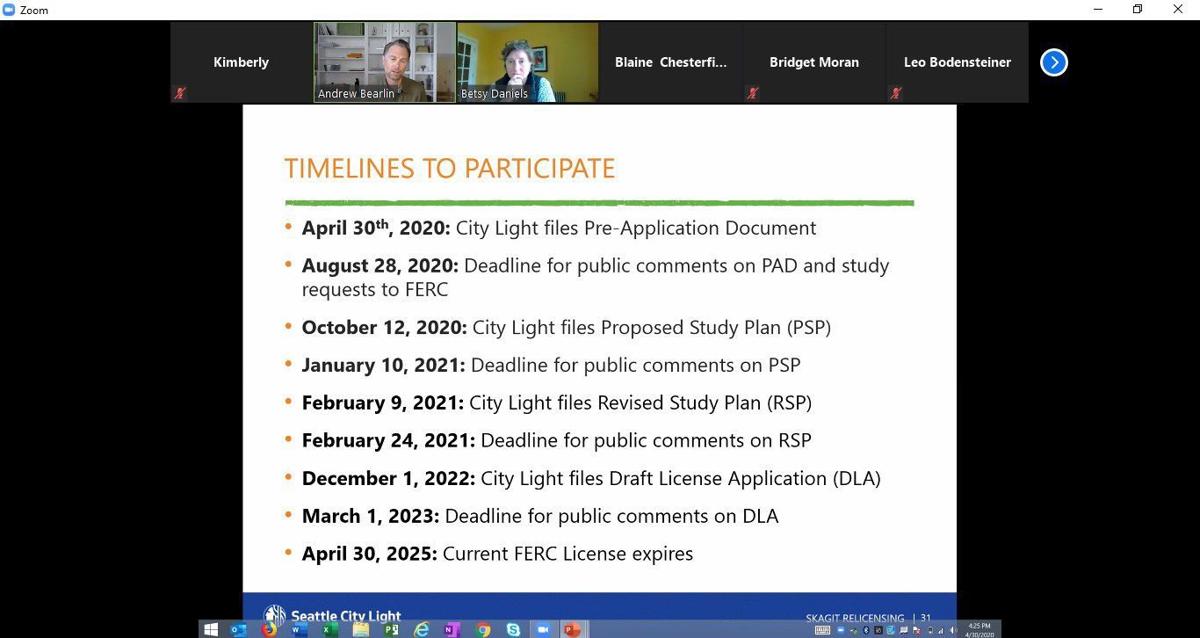 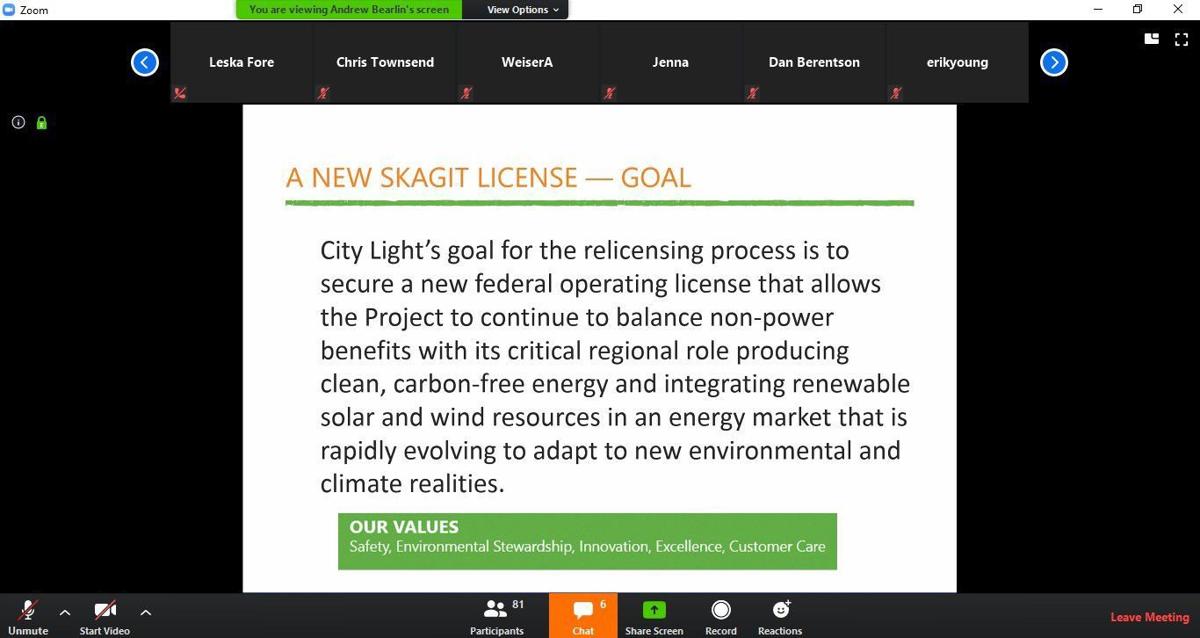 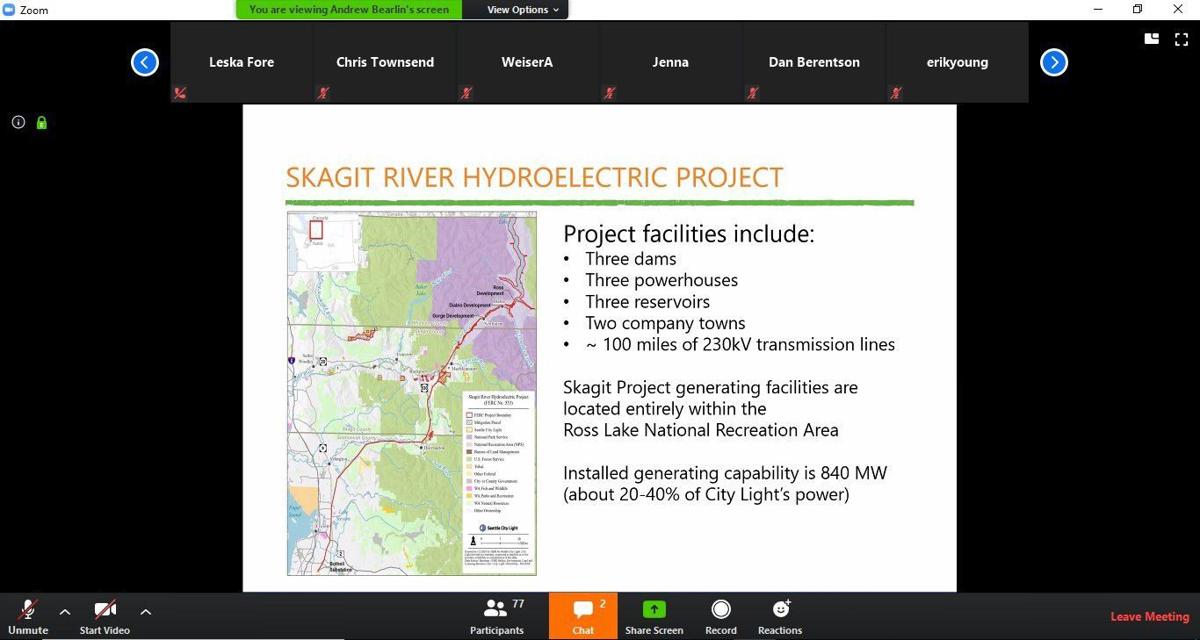 The Skagit River Hydroelectic Project consists of three dams between the Canadian border and Newhalem. Transmission lines carry the electricity produced to Seattle.

Ross Dam, one of three dams operated by Seattle City Light on the Skagit River, towers 540 feet above Diablo Lake in June 2016. At right is the powerhouse.

Andrew Bearlin and Betsy Daniels of Seattle City Light lead a meeting Thursday on Zoom about relicensing of the Skagit River Hydroelectric Project.

The Skagit River Hydroelectic Project consists of three dams between the Canadian border and Newhalem. Transmission lines carry the electricity to Seattle.

The three dams subject to federal licensing — Gorge, Diablo and Ross — are along the Skagit River in southeast Whatcom County, between the river’s start in British Columbia and its end along Skagit County shoreline.

Transmission lines carry the electricity generated by the dams to Seattle.

While planners, engineers, fish biologists and others on staff at Seattle City Light are involved in the relicensing process, the ultimate decision-making falls on Seattle’s elected leaders.

Relicensing is expected to happen between 2023 and the expiration of the existing license in 2025.

Seattle touts the nearly 100-year-old dam system as a source of renewable, or green, energy. Some have concerns, though, about the project’s impact on resources including fish and on the North Cascades National Park Service Complex where Ross Dam sits.

Rob Smith of the National Parks Conservation Association asked if the utility expects any big changes in the way it operates.

“That really is what this whole exercise is about; listing what we know about the project, what we might not know of, and what more we need to figure out ... to guide the operation of the project in the most beneficial and least impactful way into the future,” Skagit License Manager Andrew Bearlin said.

Members of the Mount Baker chapter of the Sierra Club, Trout Unlimited and the Skagit Environmental Endowment Commission were among others who asked questions.

The commission is an international group formed in response to a treaty between the U.S. and Canada regarding the height of Ross Dam and the need to protect natural resources within the watershed.

U.S. chair of the commission, Leo Bodensteiner, asked why maps of the Skagit River Hydroelectric project outline it as stopping at the Canadian border.

Bearlin said Seattle City Light is “of no illusions that environmental impacts don’t cross international boundaries,” but that “FERC doesn’t have jurisdiction in Canada and this is a FERC-regulated project.”

“We will be working closely with our partners in the watershed,” he said.

Since the dams were built, salmon, steelhead and bull trout populations have declined, causing them to be listed under the federal Endangered Species Act. Scott Schuyler, natural resource director for the Upper Skagit tribe, contends Seattle never fully examined how fish would be impacted by the city’s pursuit of electricity.

“We want Seattle City Light to fully assess the effects of hydropower on Skagit River salmon, and then develop plans to reverse or mitigate them, if that’s even possible,” he said in a Northwest Indian Fisheries Commission publication.

While Seattle City Light has since the 1990s purchased land for wildlife habitat mitigation, completed salmon habitat restoration projects and managed flow from the dams to avoid harming fish, steelhead and salmon in the watershed remain in peril, as do species that rely on them, such as the endangered Southern Resident orca whales.

“Hydropower in the Upper Skagit has provided benefits to the city of Seattle for over a century now and the disproportionate lack of reinvestment in the Skagit must be seriously looked at, because our precious river is in dire need of help,” Schuyler said.

His daughter Janelle Schuyler previously wrote to Seattle Mayor Jenny Durkan to express frustration over the damage the dams have caused to her ancestral lands.

“The dams diminished our salmon runs by cutting off salmon passage, excluding miles and miles of former habitat, and literally have impacted the entire Skagit watershed,” her Dec. 15 letter states.

A lot has changed since 1995, when Seattle City Light last received a license to operate three hydroelectric dams on the Skagit River.