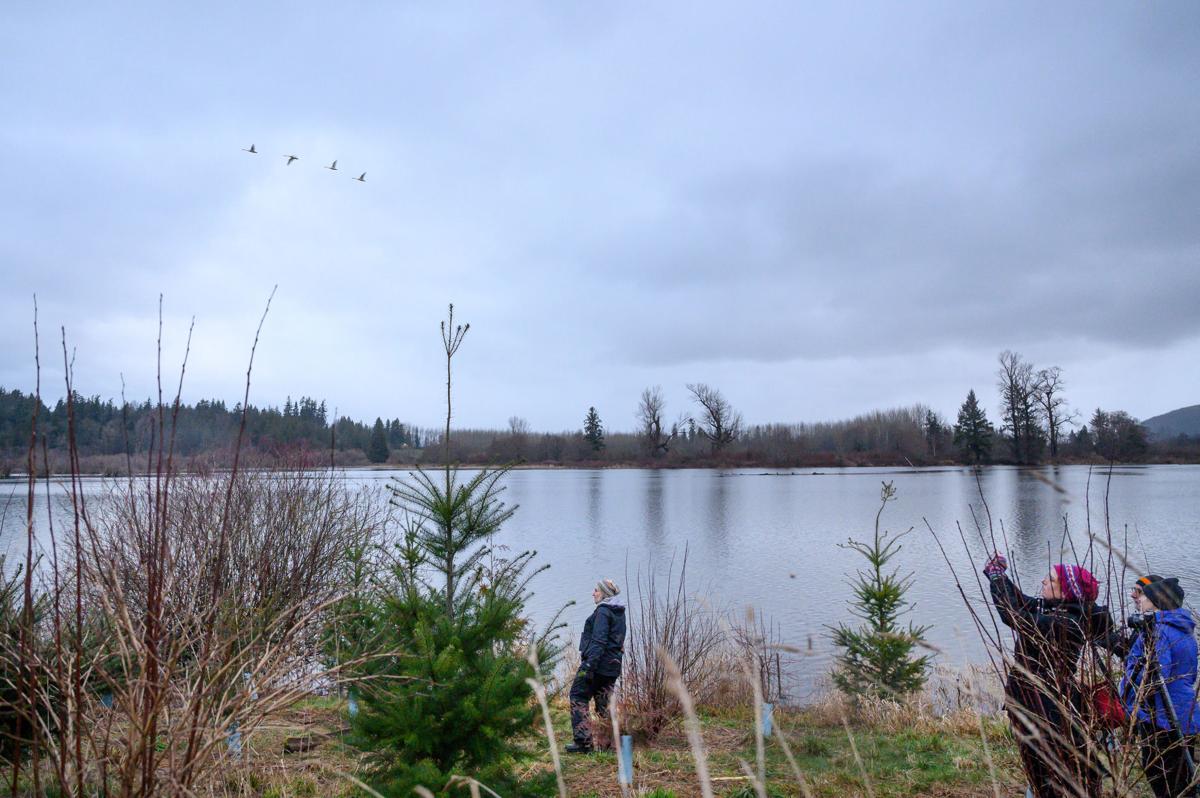 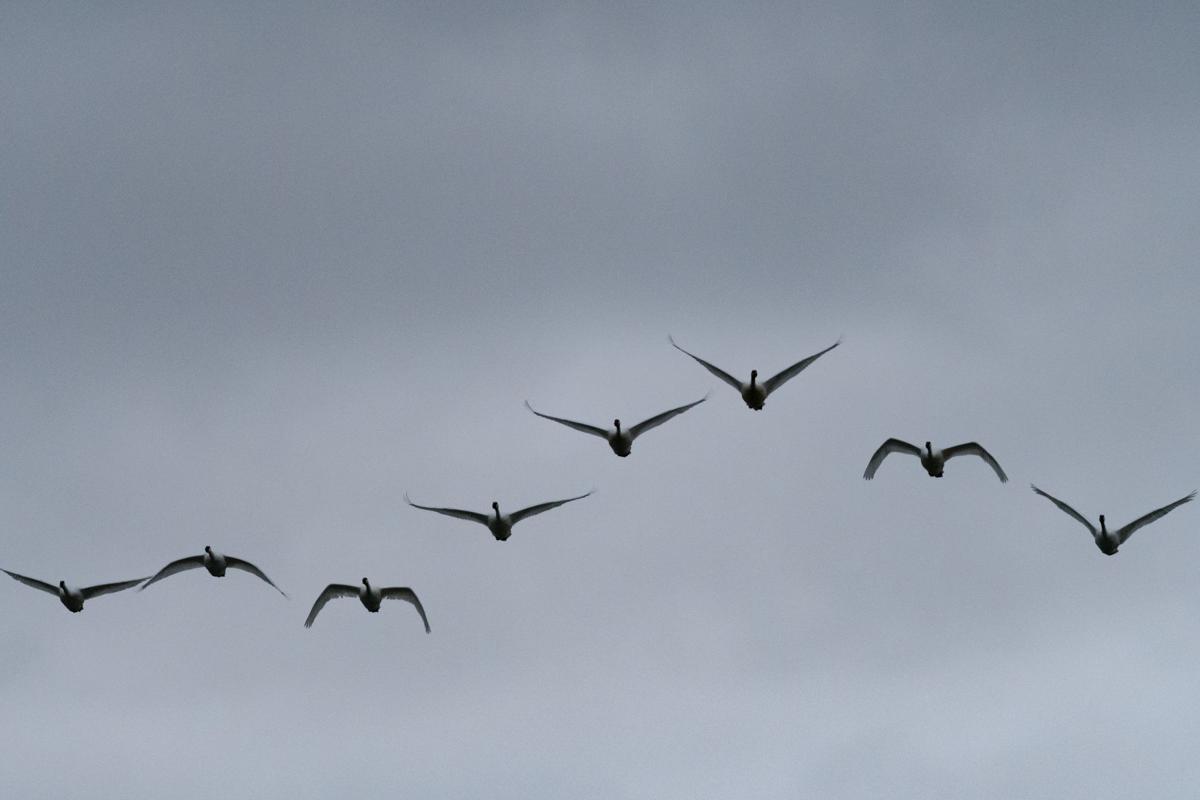 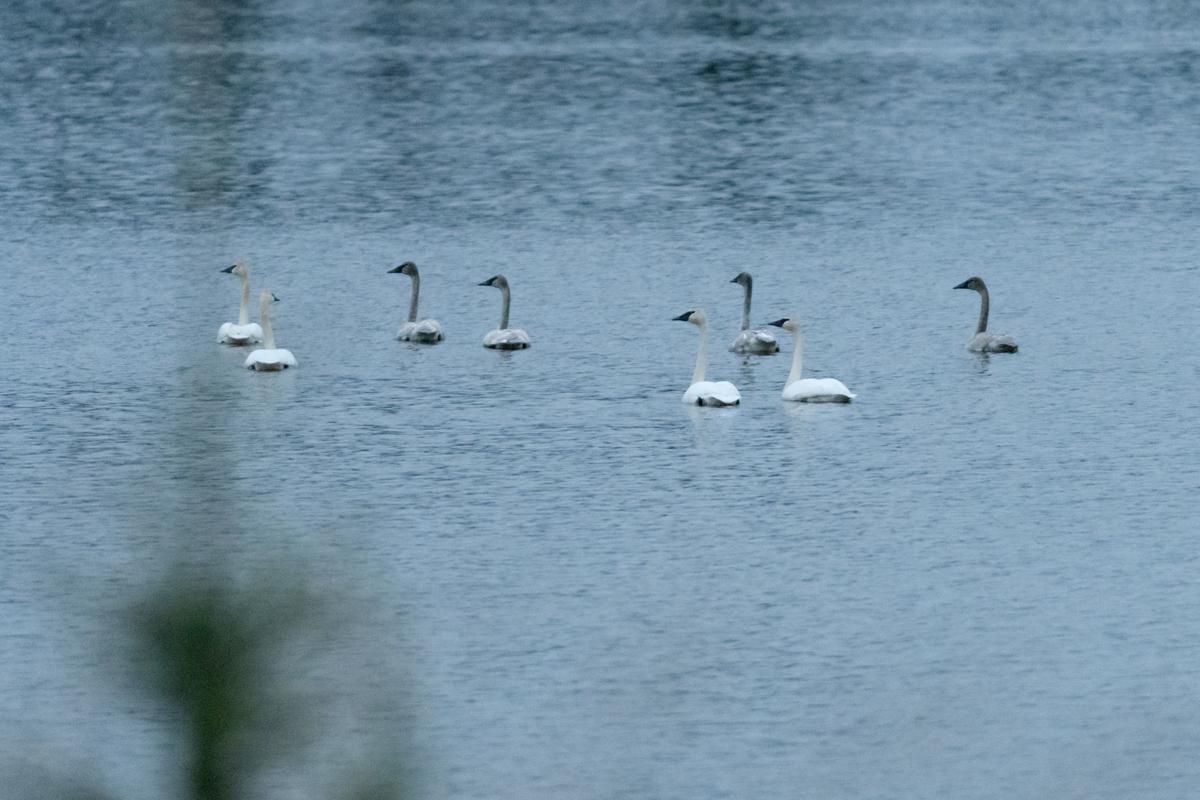 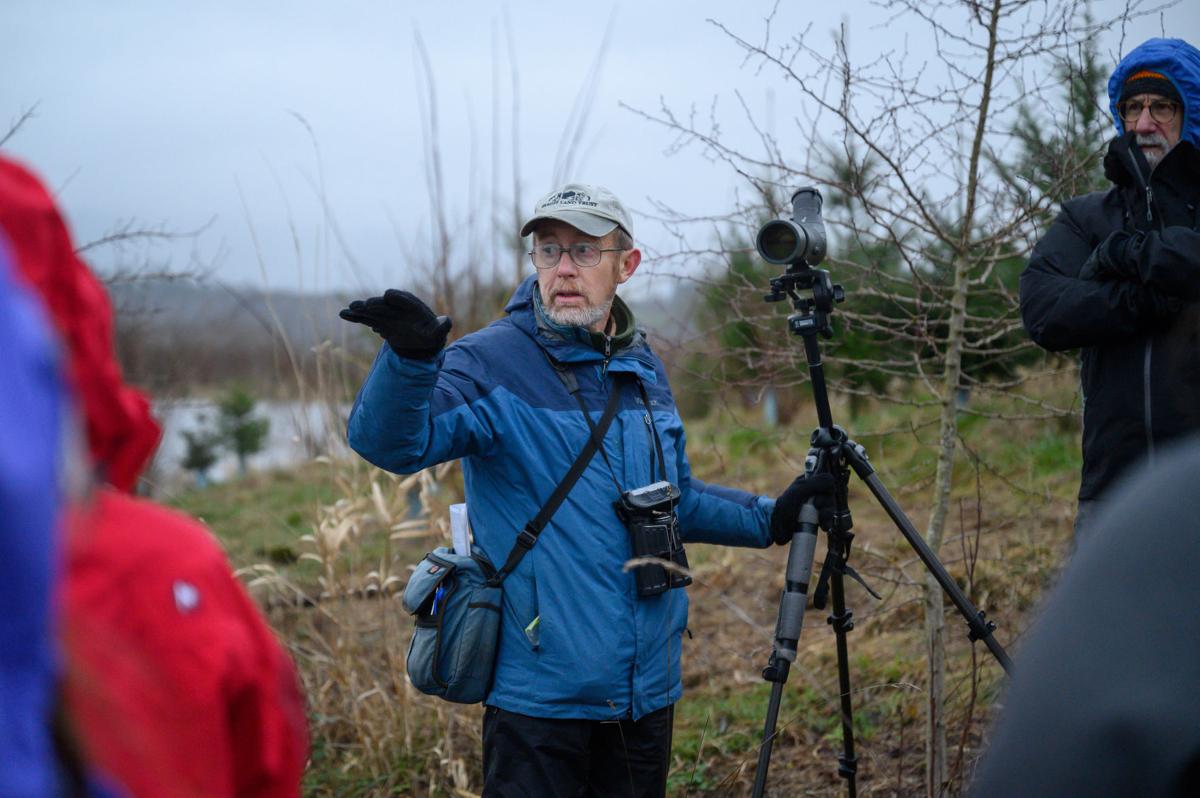 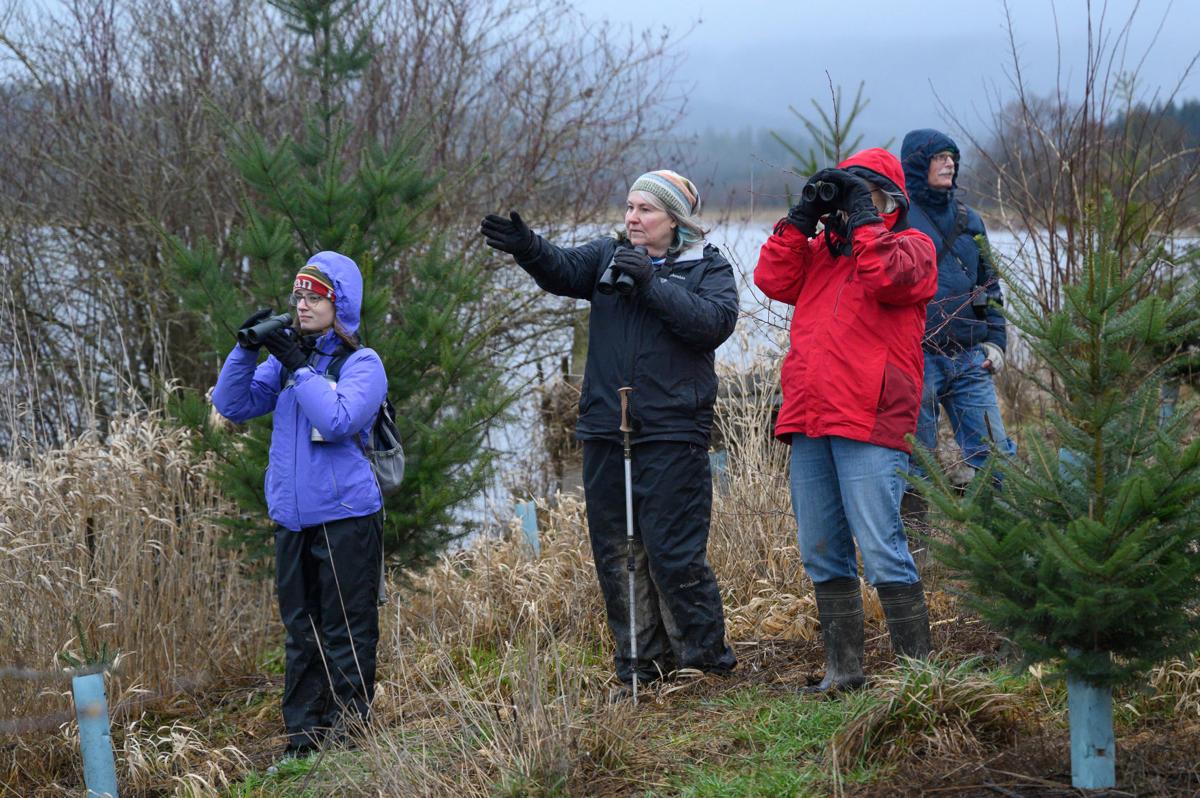 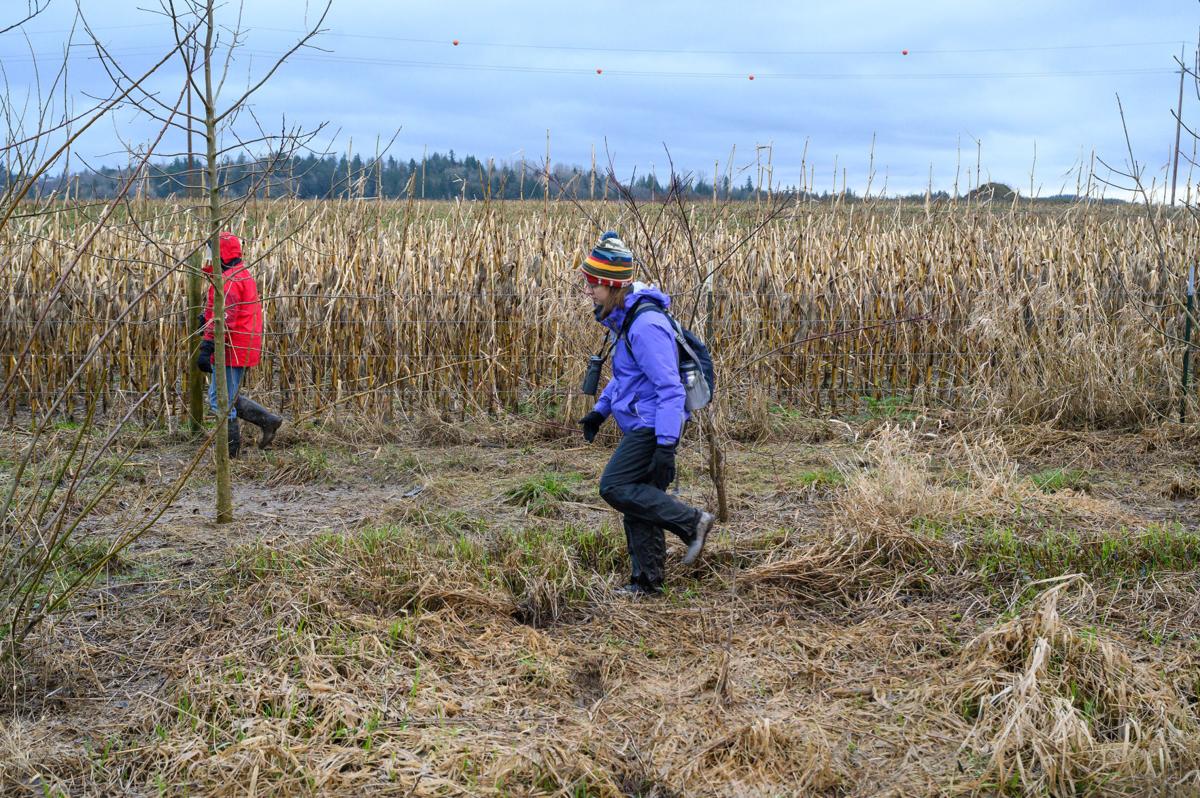 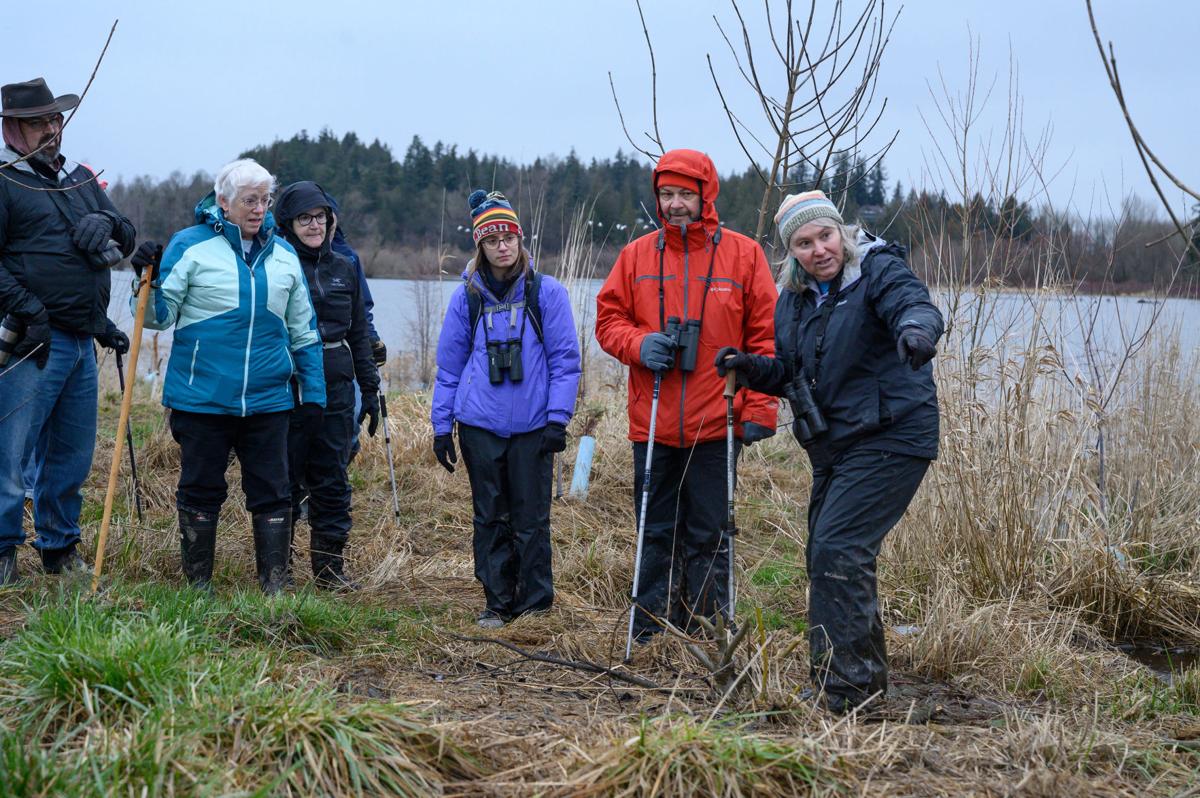 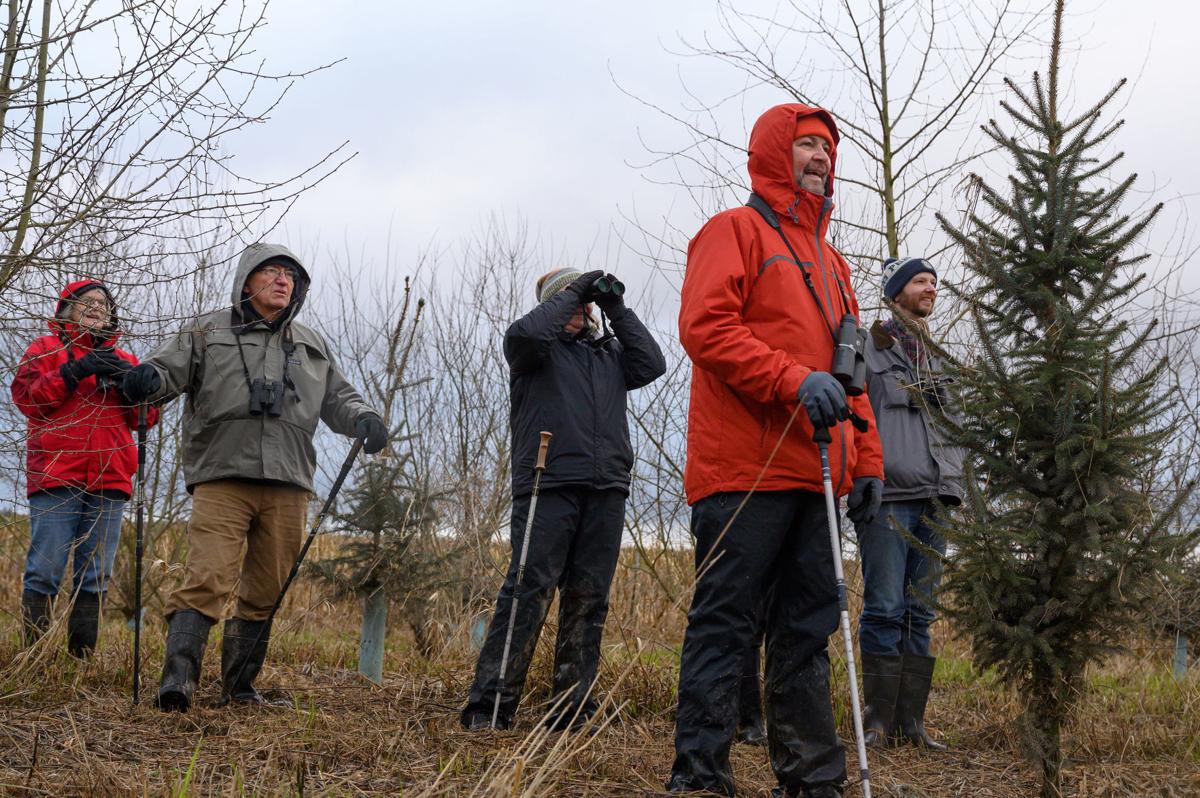 Visitors watch an eagle scatter a flock of ducks during the Swanrise walk Saturday put on by Skagit Land Trust at Barney Lake. 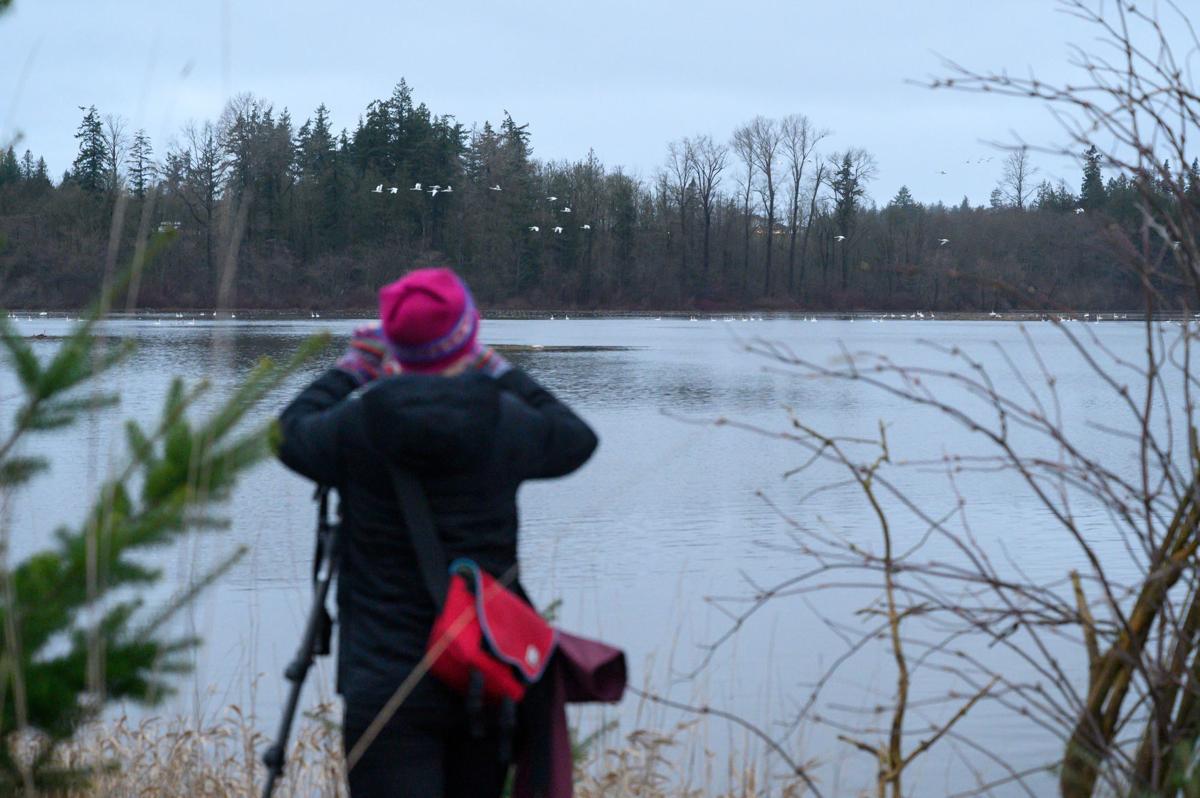 Seattle photographer Jenny Riffle, who grew up in Mount Vernon, sets up a shot Saturday during the Swanrise walk put on by Skagit Land Trust at Barney Lake. 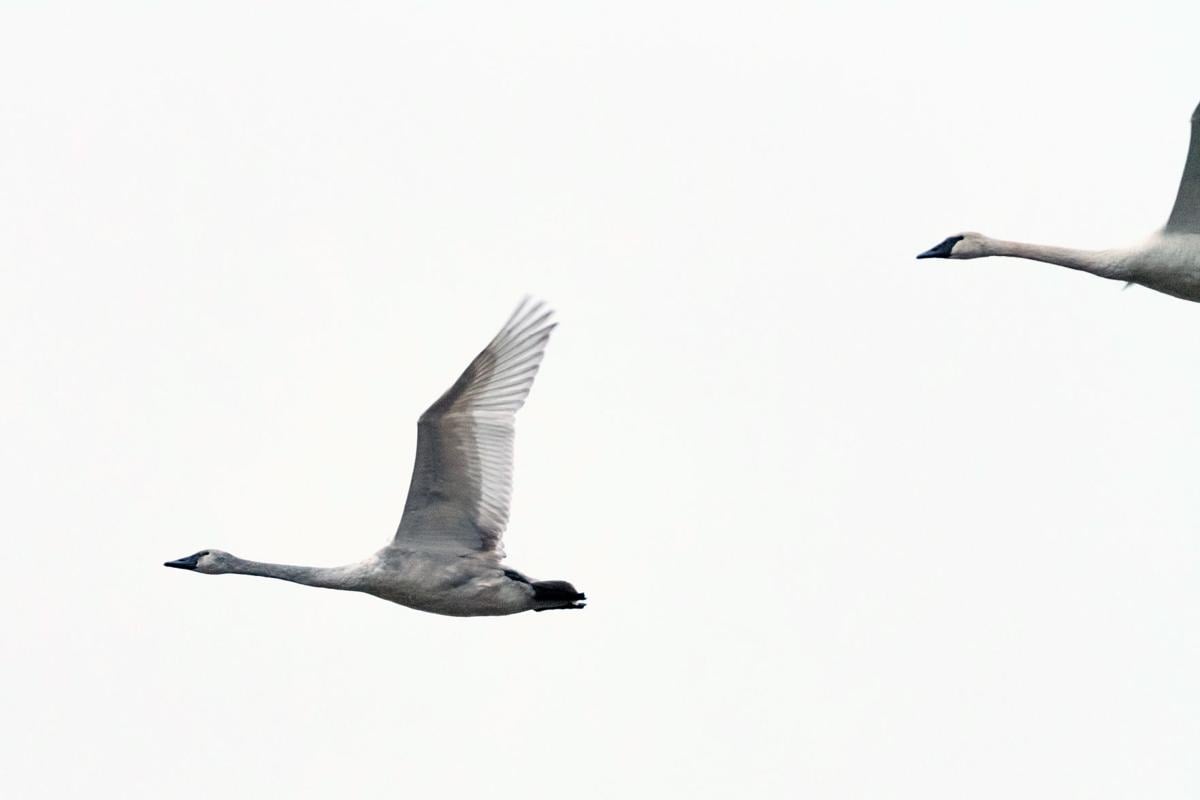 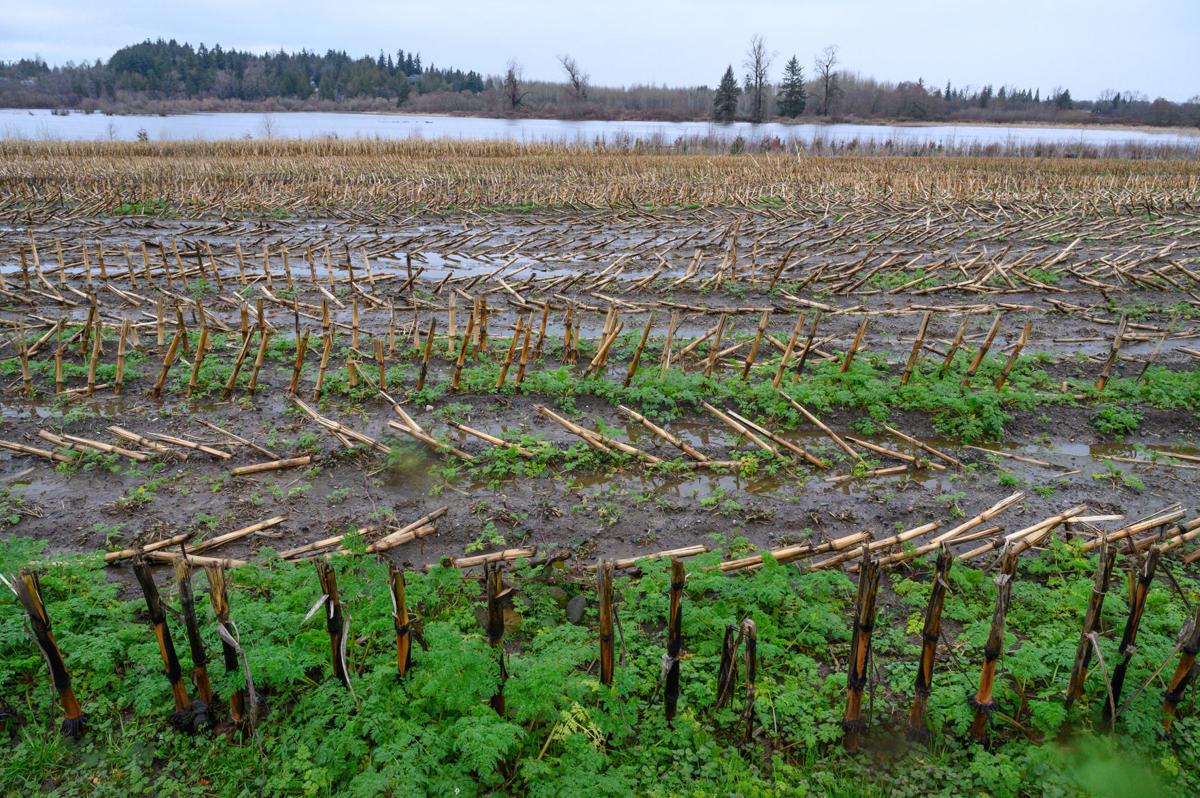 Corn fields like this one that borders Barney Lake provide food for trumpeter swans, which are seeing a growth in numbers in the Skagit Valley. 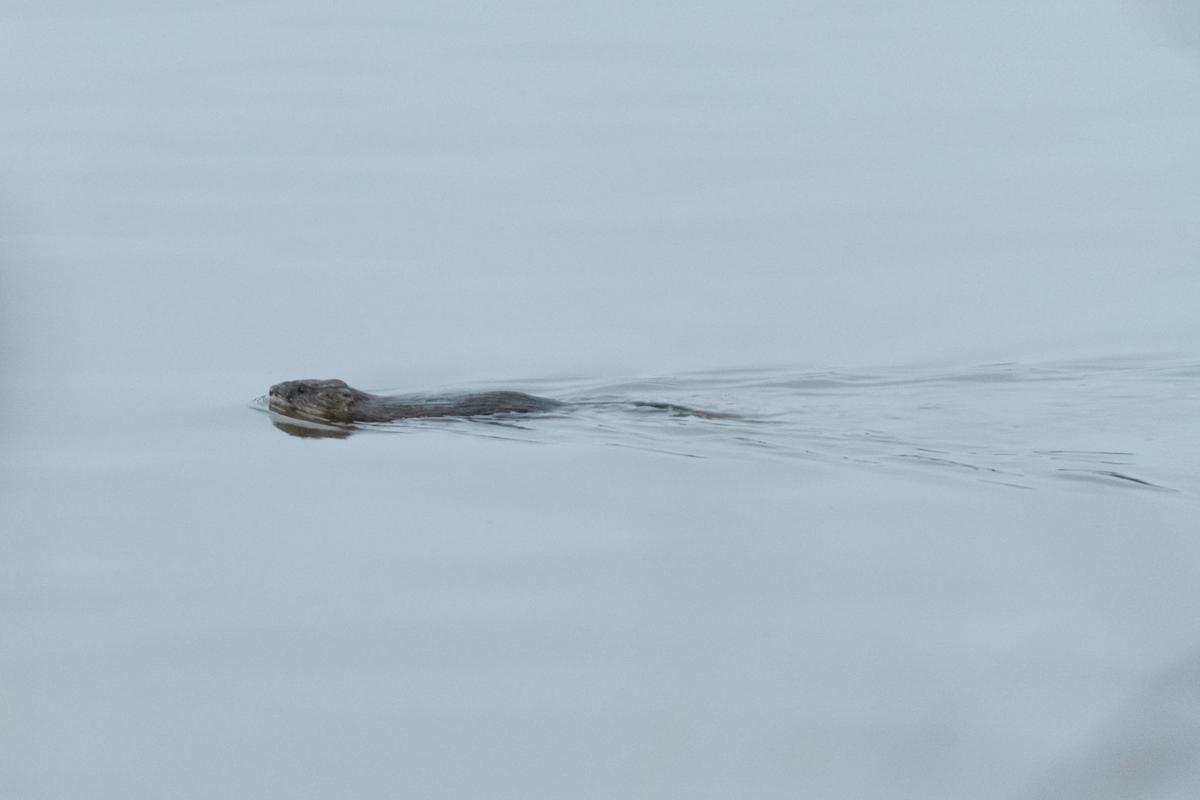 A beaver swims by to check out the group of visitors Saturday during the Swanrise walk put on by Skagit Land Trust at Barney Lake. 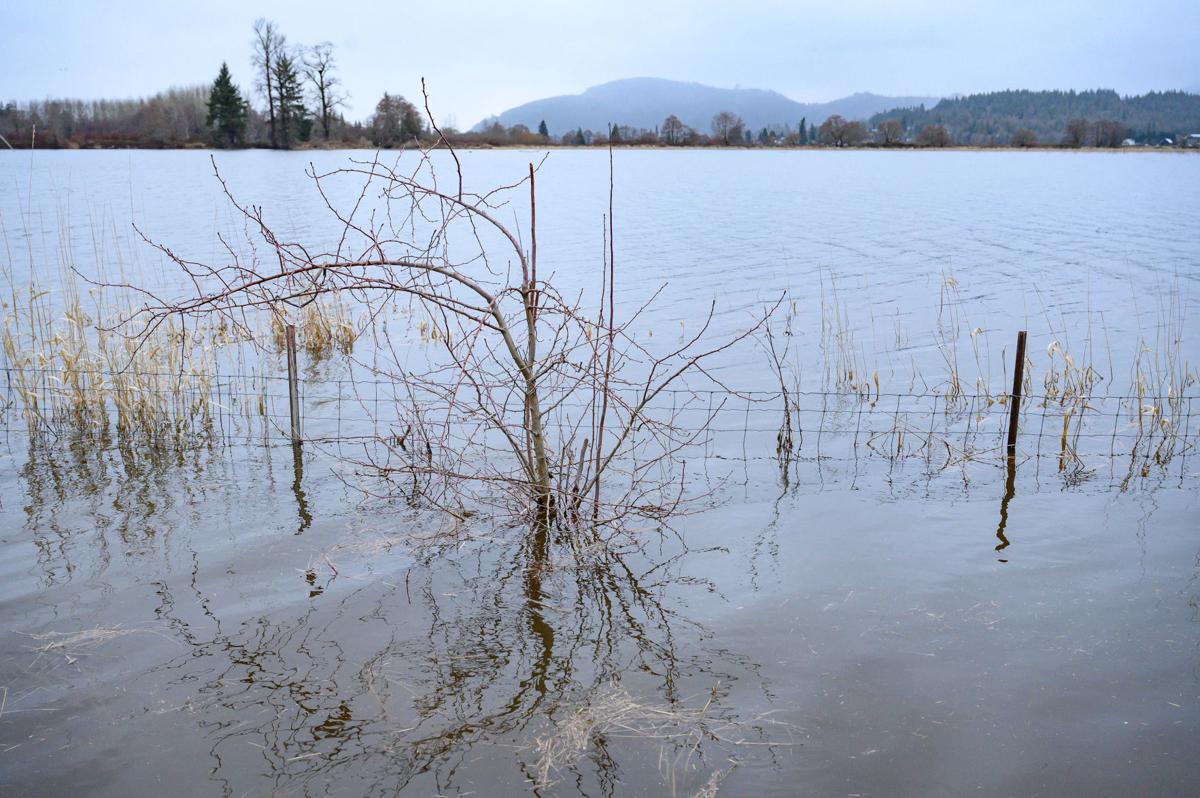 A flooding Barney Lake pushes past a fence Saturday during the Swanrise walk put on by Skagit Land Trust at the lake east of Mount Vernon.

Visitors watch an eagle scatter a flock of ducks during the Swanrise walk Saturday put on by Skagit Land Trust at Barney Lake.

A flooding Barney Lake pushes past a fence Saturday during the Swanrise walk put on by Skagit Land Trust at the lake east of Mount Vernon.

BARNEY LAKE — The surroundings were quiet when a group of 20 people gathered in northeast Mount Vernon before dawn Saturday, wearing coats and knit caps and thanking the sky for keeping the rain at bay.

The rubber boots on their feet hinted the bunch wouldn’t be on dry ground for long. They were heading to a soggy landscape just right for birds and beavers: the wetland system that is Barney Lake.

The land trust protects property at Barney Lake and the Nookachamps Creek that flows into it from the east. Because the area is difficult to access, few get to see this wildlife refuge tucked next to the largest city in Skagit County.

This is the second year the land trust has organized the event, called Swanrise, to allow a limited number of wildlife enthusiasts to see Barney Lake during the time of year the largest waterfowl in North America are active here.

“Most people do not have the chance to see Barney Lake in its winter glory and full of ducks, geese, swans and eagles,” Dahl said.

The group left ankle-deep prints in the mud on their way to the lakeside, with a sound like muffled trumpets tooting uncoordinated keys rising from the direction of the water.

Groups of swans flew over in twos, threes, fives and more on their way to drier ground. The birds spend the daylight hours munching on leftover corn, potatoes and grains in fields such as those on Fir Island.

“There is a connection in Skagit County between the number of trumpeter swans and the fact that we still have dairies and grow corn to feed the cattle,” Skagit Land Trust volunteer and Skagit Audubon Society member Tim Manns said during a brief speech about the bird species.

Many trumpeter swans spend winter in the Skagit Valley after breeding in remote areas of Alaska and northwestern Canada, according to the National Audubon Society.

According to the state Department of Fish & Wildlife’s annual survey in Skagit and surrounding counties, trumpeter swan numbers have been in the thousands in recent years.

“Skagit County has more wintering swans than anywhere else in the U.S.” Manns said.

That wasn’t always the case. Trumpeter swans were once on the brink of extinction.

As some of the birds took flight, their wings beat the water with a patter before catching the air.

After a few seconds of increasingly rapid slaps on the water, the birds soared across the brightening sky.

“They need places like this where they can safely spend the night,” Manns said of the lake, swollen with winter rain.

Some in the group took photos, peered through binoculars for a closer look, or just took in the scene in silence.

For Jenny Riffle, who has seen the swans in flight from her parents’ nearby home, seeing the white birds dot the water and start their morning journey was unique.

“The swans fly over the house a lot, but it’s fun to see them on the lake,” she said.

While observing several hundred swans, the group also heard the screech of a hawk, the call of an eagle, the quacks of ducks and songs of many other birds.

To much excitement, beaver activity was also impossible to ignore, with recently chewed stumps and branches scattered about the area, and a quick glimpse of one of the animals in the water.

“I saw its little head pop up, yay!” the trust’s Weaver said. “I’ve never seen a beaver in the wild before, so it’s a big day.”

A closer look at trumpeter swans

Trumpeter swans get to be about 5 feet tall, which is taller than most kindergarten students.

Thousands of migratory birds flock to Skagit County each winter.

While trumpeter swan numbers have grown significantly over the years and been hailed a conservation success story, the birds remain at risk of collisions with utility wires and lead poisoning from ingesting lead remnant from hunting.