A Southern Resident orca in pursuit of a meal launches a salmon out of the water in September 2016. 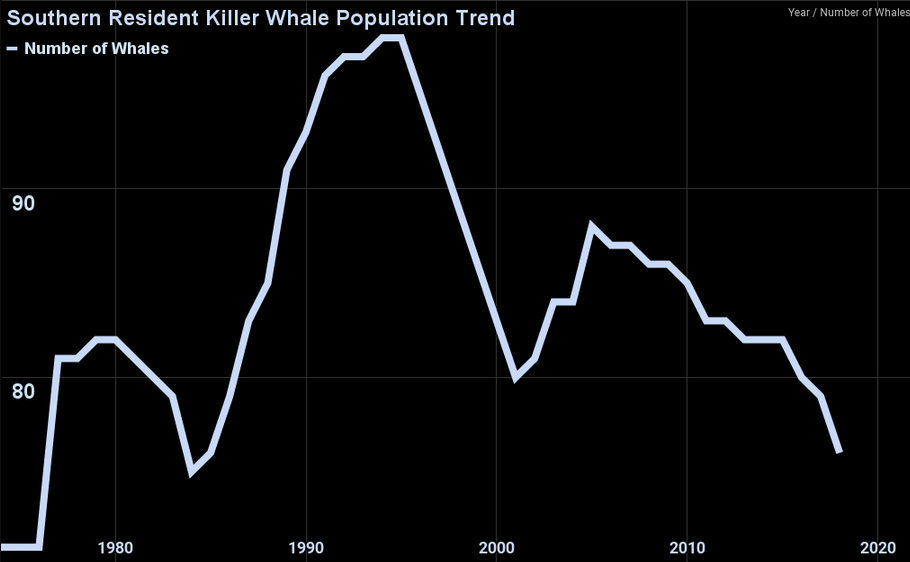 The endangered orca population has fluctuated from the high 90s in the 1990s to the low 70s in recent years.

NOAA Fisheries is initiating a five-year status review of the orcas, which were listed as endangered in 2005 under the federal Endangered Species Act.

Since the 1990s, the number of orcas in the three family groups — called J, K and L pods — that make up the population has dropped from the high 90s to the low 70s. The orcas, also called killer whales, live along the West Coast and frequent the Salish Sea.

Since being listed as endangered in 2005, the population declined from 88 orcas to a recent low of 72, according to the Center for Whale Research and NOAA Fisheries. As of February, the population was estimated at 75 orcas, including some recently identified calves.

The Endangered Species Act requires five-year reviews to determine whether a species is recovering or remains at risk of extinction.

NOAA Fisheries is accepting public comment for 60 days on new information about the orcas that has become available since the last such review in 2016.

To inform the latest review, the public, government agencies, tribes, scientists, industry, environmental organizations and others may provide information for NOAA Fisheries to considering including about orca population trends, distribution, abundance, demographics, and genetics; habitat availability, distribution, and important features for conservation; threats; and conservation measures and needs.

Previous reviews completed in 2016 and in 2011 concluded no change was warranted. NOAA Fisheries has since deemed the orcas “one of nine marine species ... most at risk of extinction in the near future.”

Comments will be accepted through June 21 online, by mail and by delivery, and must include docket number NOAA-NMFS-2021-0029.