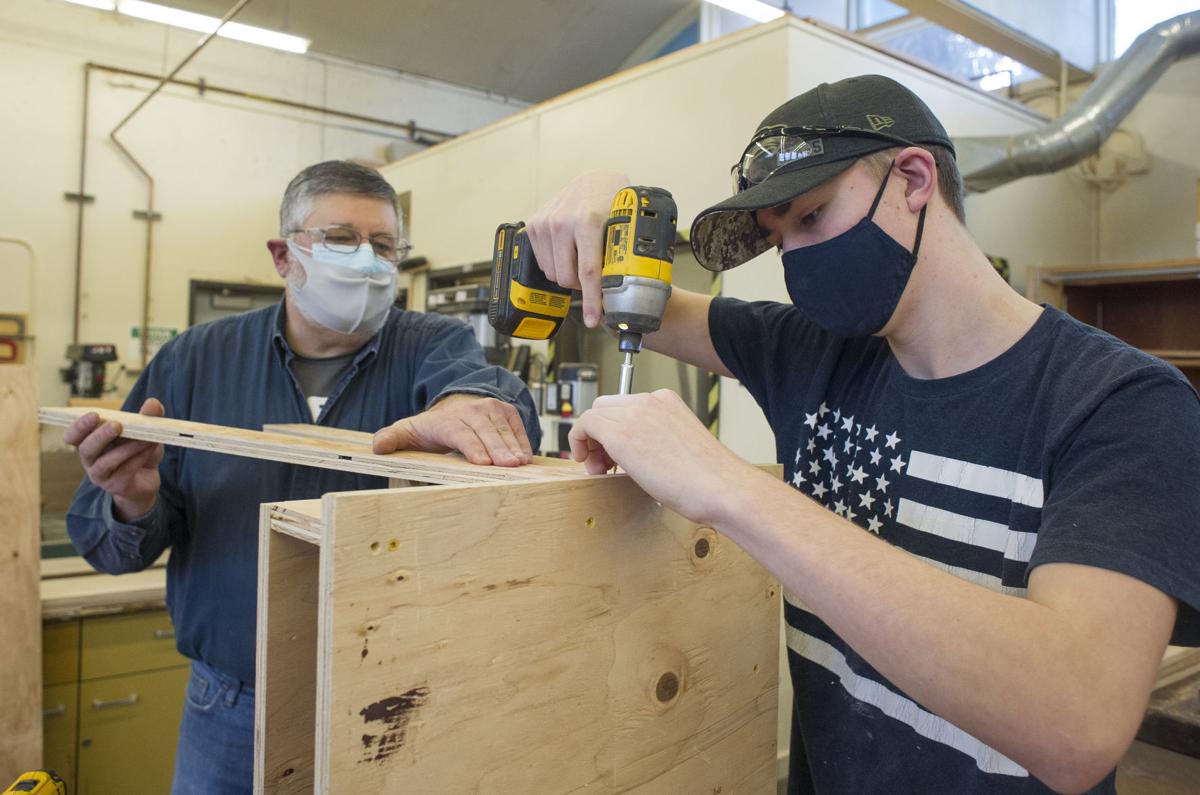 Burlington-Edison junior Talon Willard-Suit, right, uses a drill Thursday to build a desk with woodshop instructor Craig Nielsen in Burlington. The desks will be distributed to students in need of an adequate workspace while taking classes online. 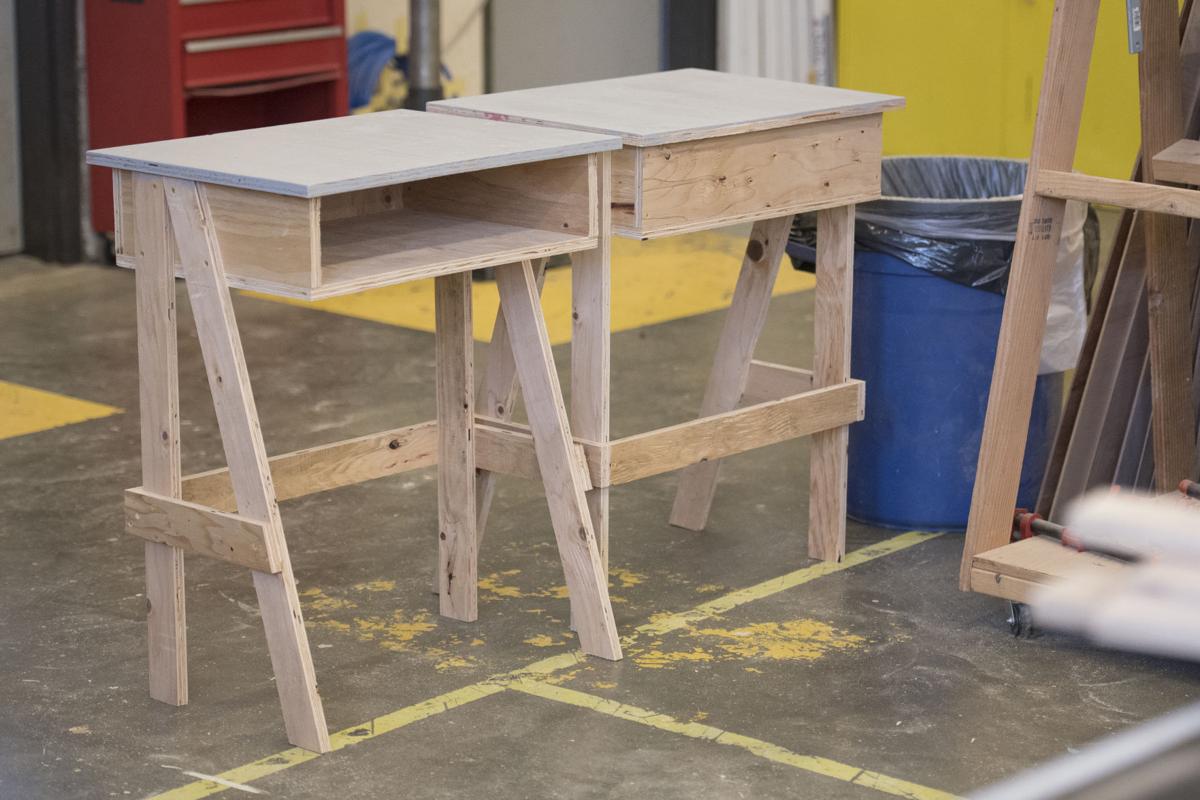 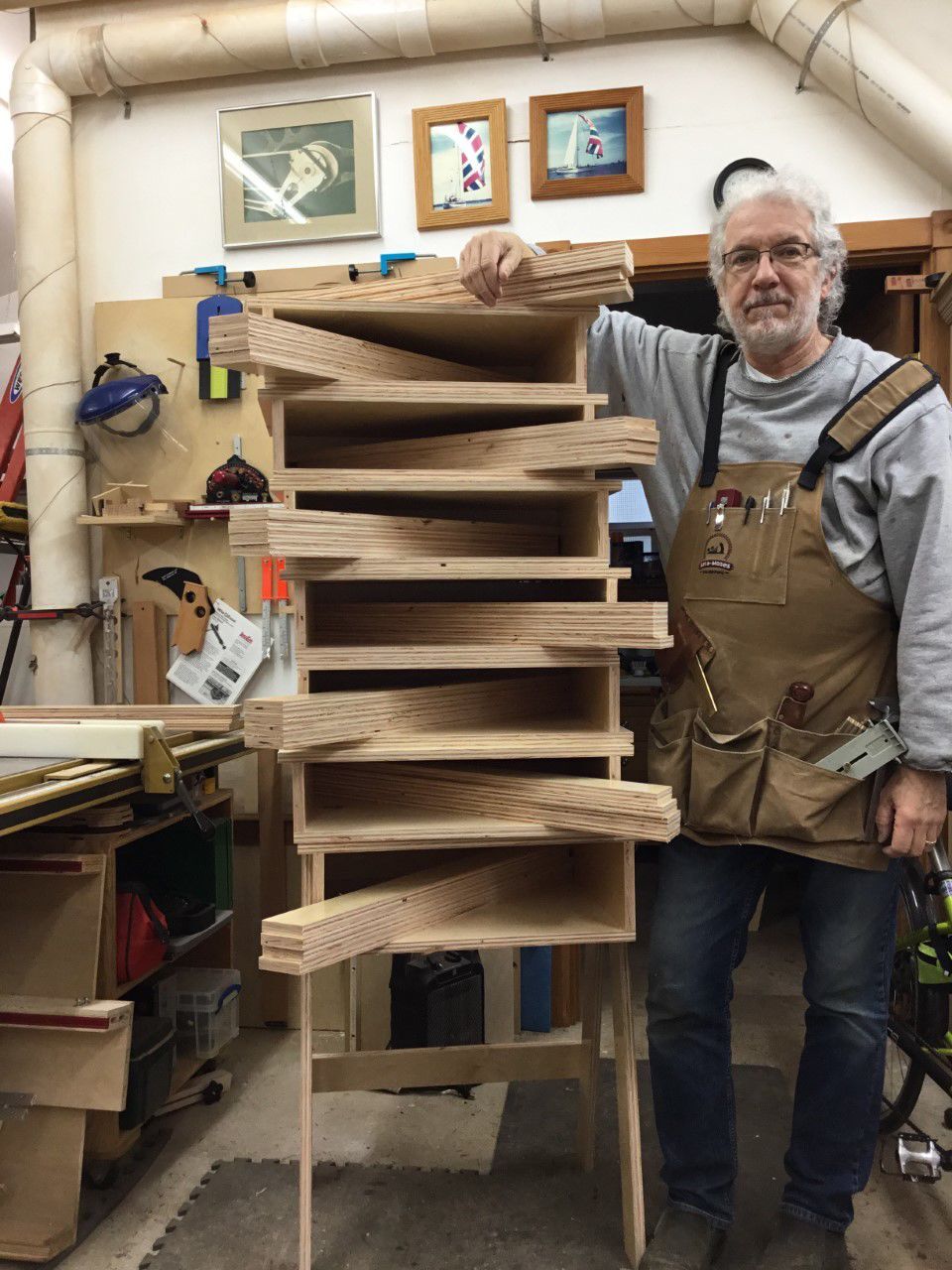 Jim Bucknell poses with materials for the desks he’s building for students in the Burlington-Edison School District.

Burlington-Edison junior Talon Willard-Suit, right, uses a drill Thursday to build a desk with woodshop instructor Craig Nielsen in Burlington. The desks will be distributed to students in need of an adequate workspace while taking classes online.

Jim Bucknell poses with materials for the desks he’s building for students in the Burlington-Edison School District.

BURLINGTON — As the Burlington-Edison School District employee tasked with helping students with learning at home, Kim Welling has heard about a crucial need in the pandemic: desks.

With students unable to access a workspace in school buildings, they often find themselves in homes without dedicated spaces for studying. It makes an already challenging situation harder, she said.

Welling said one family’s plea made the problem vivid when they told her they had six children — their own plus nieces and nephews — trying to study in the house.

“Their home was small and had no place to work,” she said.

Now, with the help of a local woodworking group and students at Burlington-Edison High School, Welling hopes to help alleviate the problem. Members of the Northwest Corner Woodworkers Association have committed to building around 30 desks for students, and members of a woodworking class taught by Craig Nielsen at Burlington-Edison High School are aiming to add 15 more.

Welling said she initially hunted for spare desks, but found so few available she thought about offering boards propped up on sawhorses.

Coincidentally, Jim Bucknell called with a more elegant solution. Bucknell is a member of the Northwest Corner Woodworkers Association, a woodworking club with about 200 members across Whatcom, Snohomish, Island and Skagit counties.

The group had been looking for a community-oriented project for a while.

“I proposed it to the club to build some desks. They’re simple, but nice. They’d be adequate for students to do their work and store their supplies,” he said.

Bucknell said the effort got a further boost when Windsor Plywood in Bellingham, which typically offers 10% discounts for the group members, instead donated 30 sheets of plywood that would normally cost more than $2,000.

Bucknell of Bow said he knows the value of a dedicated workspace. He helped build a small area for his grandchildren to study in when they visit.

“It helps them stay focused. There’s not a TV or other distractions. When they’re there, they’re studying,” he said.

In addition to the woodworking group’s output, Nielsen has tasked his advanced woodworking students with assembling desks — 15 or more.

He said he plans to produce a video that students can use to assemble them.

“I bought enough material for 20, and one (student) asked if he could do more than one,” he said.

Welling said she’s excited to help students get the tools they need to study. She plans to ask individual schools about their needs.

Anyone interested in donating desks, or who is aware of need in the district, can email her at kwelling@be.wednet.edu.

“I think once I get the word out, we’ll get more,” she said.