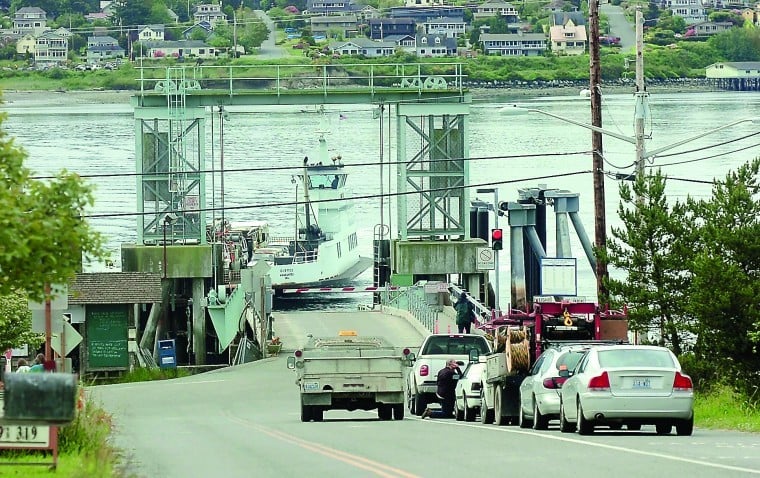 Guemes Island residents have one thing in common — reliance of the ferry. With so much time waiting to be transported, neighbors connect with each while they’re lined up at the ferry dock. For many residents, the time on the ferry returning home helps them decompress and transition from the busier mainland to the more peaceful island. 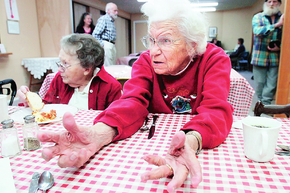 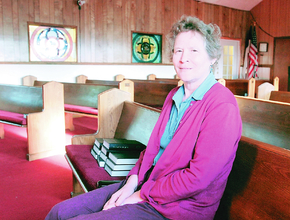 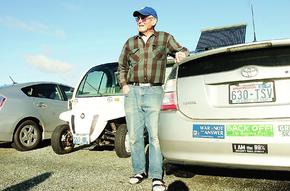 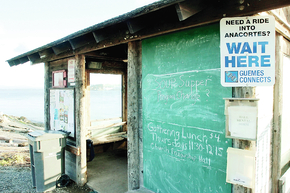 One of the surest ways for Guemes Island residents to broadcast upcoming community meetings or other events is on the bulletin board at the Guemes Island Ferry dock. Much of the town's communication happens while islanders wait in line for the ferry. Scott Terrell / Skagit Valley Herald 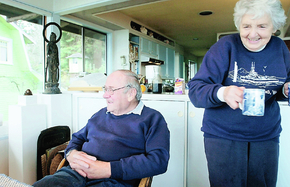 Philip and Anne McCracken enjoy the quiet of Guemes Island but also revel in the sense of community there. Scott Terrell / Skagit Valley Herald 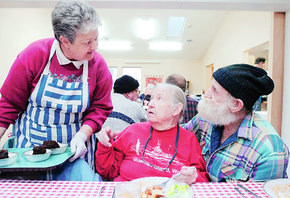 Lorraine Francis (left), organizer of Guemes Connects, makes sure that Joan Gilbertson and Salty Allen have received their brownies at The Gathering, a weekly lunch put on by the organization at the Guemes Island Community Church. Scott Terrell / Skagit Valley Herald

Guemes Island residents have one thing in common — reliance of the ferry. With so much time waiting to be transported, neighbors connect with each while they’re lined up at the ferry dock. For many residents, the time on the ferry returning home helps them decompress and transition from the busier mainland to the more peaceful island.

One of the surest ways for Guemes Island residents to broadcast upcoming community meetings or other events is on the bulletin board at the Guemes Island Ferry dock. Much of the town's communication happens while islanders wait in line for the ferry. Scott Terrell / Skagit Valley Herald

Philip and Anne McCracken enjoy the quiet of Guemes Island but also revel in the sense of community there. Scott Terrell / Skagit Valley Herald

Lorraine Francis (left), organizer of Guemes Connects, makes sure that Joan Gilbertson and Salty Allen have received their brownies at The Gathering, a weekly lunch put on by the organization at the Guemes Island Community Church. Scott Terrell / Skagit Valley Herald

GUEMES ISLAND — In the winter months, this small rural island at the edge of Skagit County empties of snow birds and bicycle tourists and is left to the locals.

With one store, a church and a community center, full-time residents of Guemes Island manage to entertain themselves. Some have chosen a reclusive and quiet lifestyle, while others mix and mingle, and find every group and committee they can to join.

There are about 700 permanent residents, though many of those are snowbirds, said Win Anderson, an island historian, former editor of the Guemes newspaper and the owner of Guemes’ only store.

The Guemenians, as some call them, are hesitant to define themselves; they’re a diverse group. But they do have a common thread — the tenacity to live by the tick of a ferry schedule and enough tolerance to get along with each other on the confined, 5,237-acre island.

“You have to be an islander to live here,” said Leo Osborne, one of the island’s many artists. “If you are committed to that ferry day and night, you become the heart of the island. It creates a different tone of society.”

A large green chalkboard hangs at the entrance to the ferry on the Guemes side, with announcements of everything from holiday parties to church gatherings. Anyone can post an event.

While there are formal ways of communicating, such as the monthly local paper, “The Guemes Tide,” or the online newsletter, “Line Time,” named after waiting in line for the ferry, much communication happens while doing just that: Waiting for the ferry.

The stretch of water between Anacortes and Guemes has become known as a moat to many, separating the commercial world from the peaceful island.

Life is slower on Guemes.

With little to distract, Guemes Island has become a magnet for artists — not just visual artists, but poets and musicians, or those who are creative in other ways.

“It does feel like there is this huge creative thread that runs throughout the island that weaves us together in this island tapestry,” Osborne said. “A lot of my inspiration comes from right in my back yard, and that’s what keeps me here.”

Osborne moved to Guemes after striking up a pen pal relationship in the 1990s with the famous sculptor Philip McCracken, who still lives on the island.

“That first time I got on the ferry to Guemes Island, I felt like I was coming home,” Osborne said. “That sense of place hit me right at that moment. Within six months, I was living here.”

McCracken is one of the more solitary island residents. Most of his afternoons are spent sculpting in his studio. The rest of the time, he’s home with his wife. They are in their 80s.

“Anne and I, we’re like a couple of limpets — barnacles on a rock,” McCracken said during a recent interview at his home overlooking Padilla Bay. “This is our rock.”

Anne said when the couple lived in New York, a gallery owner told them McCracken needed to “go back where his muse was — which is here.”

McCracken said his natural surroundings on Guemes allow him the peace and quiet he needs to create.

“The city life is very exciting and feeds the spirit in many ways, but I’m more introverted and find it necessary to have quiet to do the work,” he said.

Others feel the same inspiration.

“Because it’s rural and so noncommercial, it’s very easy to stay in touch with nature and the natural world, and those have always been strong influences for artists,” said Edith Walden, a Guemes Island quince farmer (similar to apples, used in baking and preserves).

Walden, who formerly worked in software, also is a poet and an editor and writer for the “The Guemes Tide.”

“There is nothing to do on Guemes,” Walden said. “It’s not a destination. The only thing there is the store and the resort. If you’re going to be there, you’re going to have to have the ability to create the kind of life you want just right there.”

For some, that creativity manifests in other ways, such as unique organizations or community events, Walden said.

One of the most popular organizations on the island is Guemes Connects, in which a network of residents helps others in need.

Volunteers do everything from comforting the terminally ill to helping the elderly with bathing or rides to town.

Jane Read, the oldest resident of the island at 93, said she would have to be in a nursing home if it weren’t for the organization bringing her food and taking her to doctor appointments.

“Now that I’m old, they really help me with everything,” Read said at a lunch hosted by Guemes Connects at the church. “They’ll do anything.”

One of the main goals of the organization is to help older residents like Read stay on the island, though it goes way beyond that.

“We just all pitch in,” said Lorraine Francis, the leader of Guemes Connects, as she stirred rice pilaf for an event at the church. “I think we’ve got so much diversity in backgrounds and interests, everyone wants to make the place comfortable and livable.”

One woman collects everyone’s name and phone number for a Guemes Island phone book. Another has organized an intricate emergency plan, including radio communication and a centralized area for shelter and food.

“There are just so many people who raise their hand when they’re asked to do something,” Anderson said.

Guemes residents have a reputation for their liberal-leaning political views. They like to call themselves “progressive,” valuing sustainable living and tolerance.

Even the church is nontraditional, with a congregation that includes atheists, agnostics, Buddhists and one member who subscribes to Sufism.

The church hosts nonreligious “soup suppers,” during which they invite speakers on a variety of topics — everything from healthy living to different religions.

The Rev. Martha Kline said she invited an atheist to share his views at one gathering and in the end, more people admitted to agreeing with him than not.

There’s also an informal atheist group that meets about once a month, founded by Howard Pellett, chair of the Skagit County Green Party.

Two silver Prius Toyotas and a Gem electric car were parked outside of Pellett’s home recently. Like many on the island, he’s conscientious about trying to live sustainably. The island’s only store sells a wide variety of organic foods. Even the fire station’s roof is covered in solar panels.

Several years ago, a group of residents worked together to raise $2.2 million to purchase and protect the top of Guemes Mountain from development. Anderson’s proposal to build the only store there prompted an uproar among residents. Some who initially opposed the store have now come to love it. Others still won’t step foot inside.

But the island isn’t completely inhabited by liberals.

Allen Bush, 42, a third-generation rancher on this island, also is a precinct committee officer for the Skagit Republicans.

“I don’t get into political conversations with too many people,” Bush said.

Others say Bush has worked well with the islanders to keep Guemes’ character.

“Rural character isn’t a physical attribute,” Bush said. “It’s more of a philosophy. It’s a lack of rules and requirements from others. It’s a self-reliant law-of-the-land philosophy.”

Many people try to move to the island, but end up leaving after a couple of years, not able to cope with the ferry or find their place in the tight-knit community.

“You don’t really choose Guemes,” Bush said. “It chooses you.”

There is one overriding issue on Guemes Island — the ferry. Ferry meetings fill the community center where locals argue about how much riders should pay and when the ferry should run. Some want it to run later at night, while others want shorter hours to keep people from making Guemes a bedroom community for Seattleites.

No matter what their views — the islanders seem to care about one another and the wider world of politics.

The history of the island is scattered with independent spirits. During World War I, it hosted 600 men in a shipyard. During prohibition, there was a large bootlegging operation on the island, Anderson said.

Others came to homestead.

Read, who is still spunky at 93, said she remembers celebrating the arrival of electricity on the island in 1949 by throwing her irons and lamps down her well.

The future of Guemes Island is unclear as some of the longtime residents are growing old, making way for younger residents with off-island jobs.

Some fear what might become of their idyllic community, based on the values of volunteerism and preserving the rural setting.

“In the smallest communities, there is a closeness that doesn’t exist when people are too spread out,” McCracken said. “Guemes is the perfect community size. Beyond that, as soon as it expands, you lose that.”