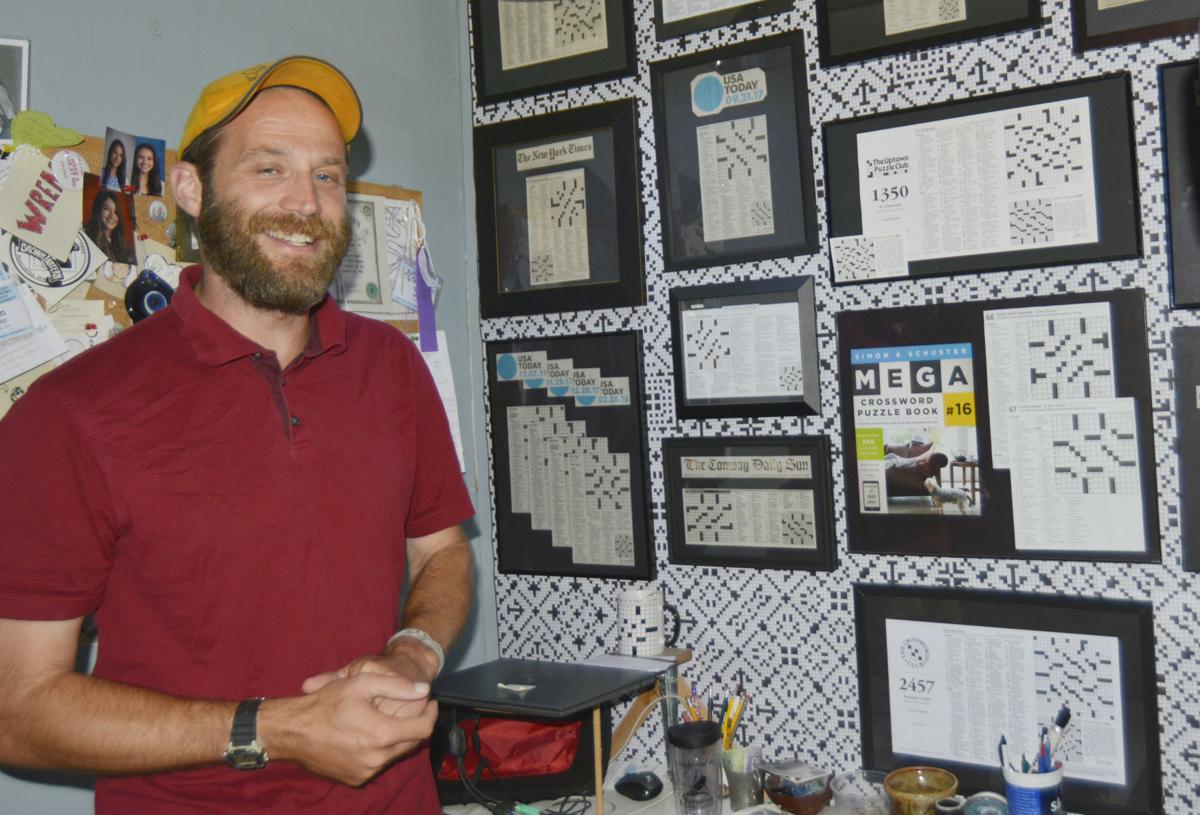 Wren Schultz has a wall of his published crossword puzzles, the most prestigious of which are the ones that ran in The New York Times. 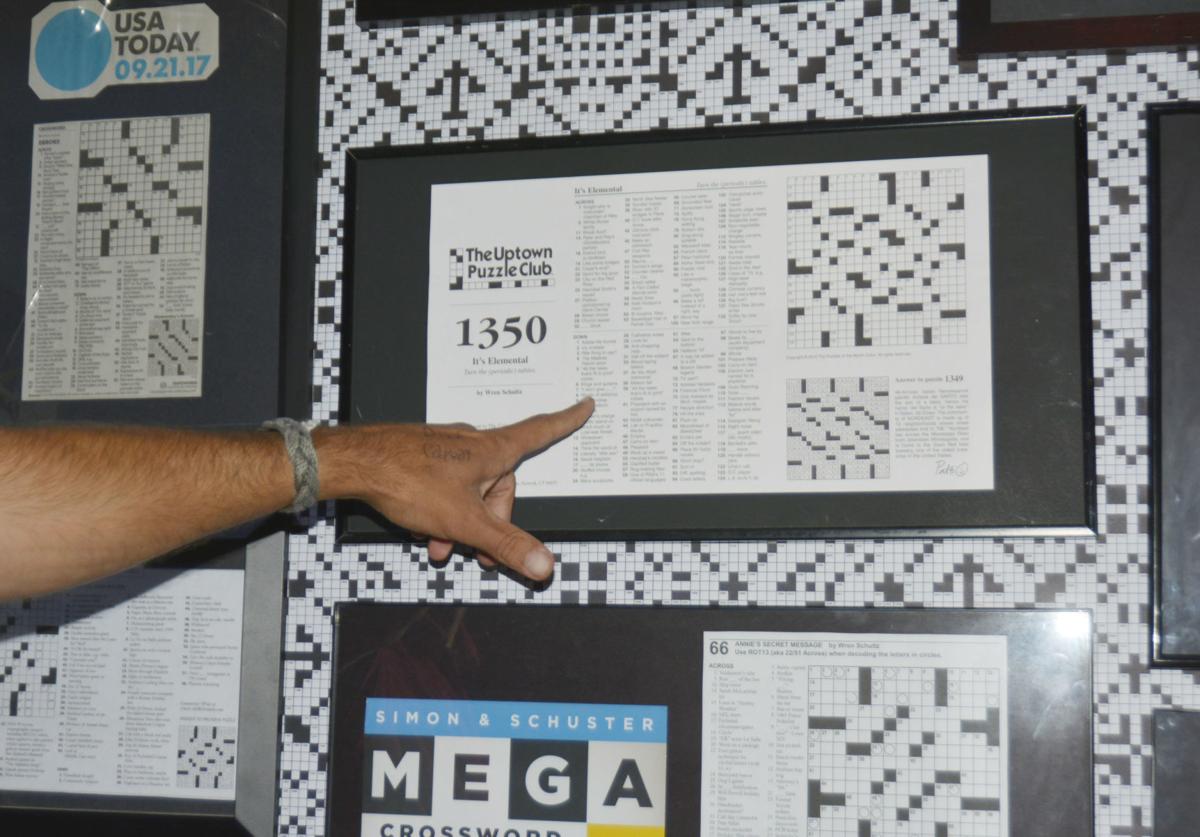 Wren Schultz points to one of his crossword puzzles.

Wren Schultz has a wall of his published crossword puzzles, the most prestigious of which are the ones that ran in The New York Times.

Wren Schultz points to one of his crossword puzzles.

Though they run in only two dimensions, crossword puzzles possess astounding depth — as does the passion of those who love them.

One Anacortes man has put that passion into practice, making a name for himself as a crossword puzzle constructor. His hand-crafted puzzles have been featured in major publications including The New York Times.

“Just like any subculture there are people who share the passion, they often get together and nerd out on it,” Wren Schultz said. “There’s a deep culture in anything.”

In this subculture, there are conventions, tournaments and a popular documentary about crossword puzzles.

The 40-year-old Schultz recalls one puzzle enthusiast who would show up at the American Crossword Puzzle Tournament in Stamford, Connecticut, in costumes — including suits of armor or football uniforms fashioned entirely out of crossword puzzles.

Crosswords are thriving, even in the age of digital media, Schultz said.

“They’re becoming much more popular. You can do them on your phone, there’s apps for your phone, the creation process has become much more accessible for people,” he said. “So you’re having a wider diversity of people creating puzzles, you have more creative themes, you have a wider variety of venues for them, so everyone can find their niche.”

Creating puzzles is time intensive. It can take 12 hours or longer to put one together.

“You’ll spend three or four hours in the same corner of the puzzle and by the end of the night you’ll have made no progress ... but during it I don’t get frustrated, I just go through the iterations,” Schultz said. “It’s one of those things where you tune out the rest of the world because you need that much focus.”

Schultz said not every puzzle solver is a puzzle creator, and that some puzzles appeal more to creators than solvers.

For the creators, constructing puzzles is more than a passion — it’s a shot at prestige.

“The prestige is a big thing. Getting a crossword puzzle published in The New York Times is one of those things,” Schultz said. “I mean I’ve met people and we’re talking and they’re strangers at the beginning of our talk and at the end they ask me for my autograph because they’re like ‘Oh, my God, you’ve had a puzzle in The New York Times?’ ... It’s like meeting an author who has been published.”

Schultz said he has always been a problem-solver. He said while in high school he would drop by a bookstore and solve the crossword puzzles in the store’s recycling bin.

Crosswords can have a hand-crafted quality to them, from the themes to what are called the themers — the words that help convey the puzzle’s theme — to the shape of the puzzle itself.

Because there are few rules and restrictions, the breadth and diversity of puzzles can be great.

When puzzle fans get together to what Schultz calls “nerd out” on puzzles, they focus on a few key things.

“The first and most obvious would be the theme,” Schultz said. “Anyone who has done 10 puzzles knows theme, because any decent puzzle has a theme.”

Themes can be simple or complex. A relatively simple theme is to just add or remove a single letter to a word or phrase to create a new one.

“That is what gets discussed the most, like ‘that was clever’ or ‘that was pretty generic,’” Schultz said.

Schultz said the first puzzle he got published had a theme of “Forget about it,” where those doing the puzzles had to remove “it” from popular phrases.

For his two puzzles that have appeared in The New York Times, Schultz had more complex themes.

One was set up so that every second square was a vowel, so the whole puzzle was formatted consonant-vowel-consonant.

Schultz said that puzzle was more fun to create than solve.

“All the reviews online said, ‘That puzzle sucked, it was obviously a creator’s puzzle’ as it was fun for me because I had this weird stipulation on it,” Schultz said. “But from a solver’s perspective it just led to a clunky fill.”

The process of making crossword puzzles begins with the theme, then the themers, then the puzzle’s shape, which is decided based on some rules to crosswords — no one-letter words, for one — and the want of the constructor.

Once all the solutions are on the grid, then clues are written. Clues are areas where those who edit crossword puzzles have the most oversight and will often write to suit their respective audiences.

“I try and submit witty ones and I try to do the most avant-garde clue I can think of, because they can tone down anything but if they keep one of them it’s cool,” Schultz said.

Schultz has advice for those who would want to take a stab at constructing a crossword.

As for Schultz, he wants to continue to get his puzzles published.

His new goal is to make it to the Sunday edition of The New York Times, and beyond that to have a puzzle run every day of the week.