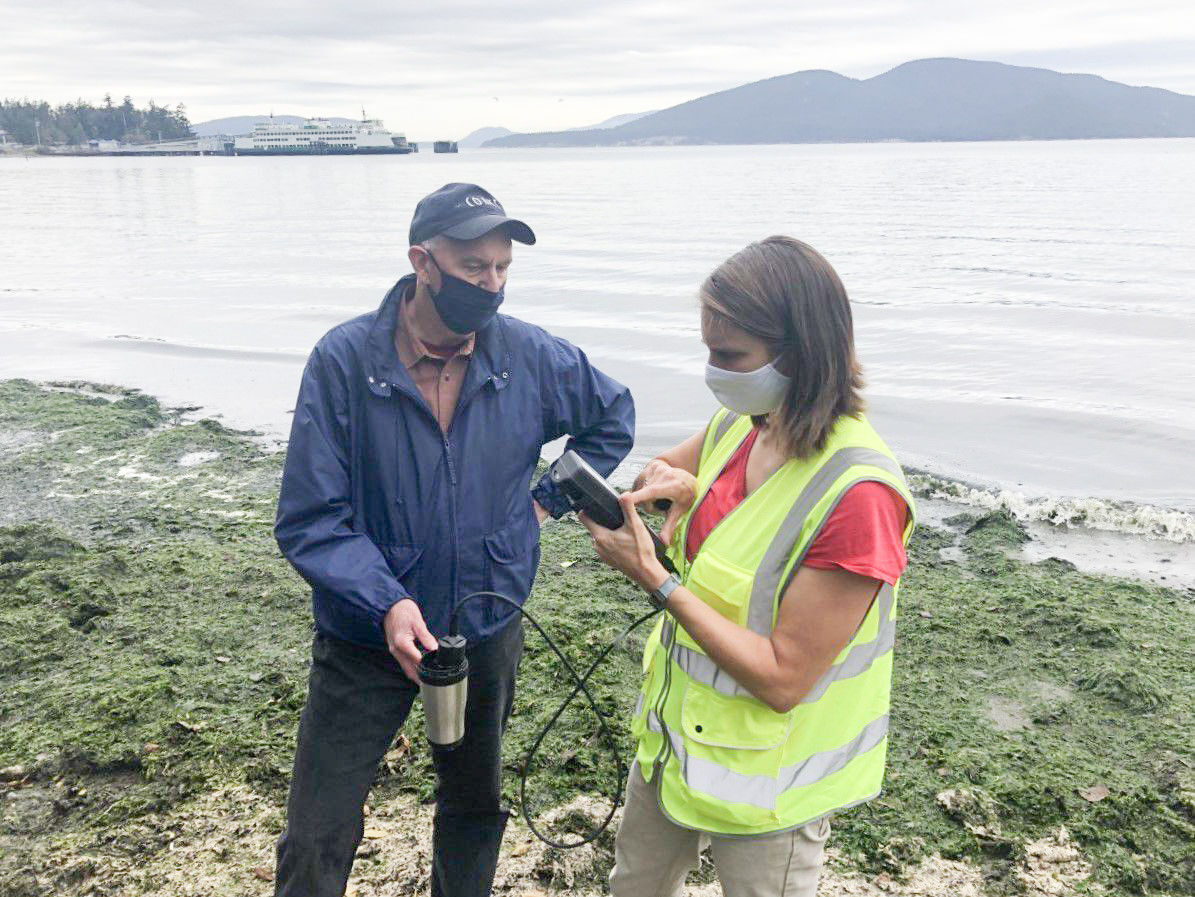 Anacortes Stormwater Program Manager Diane Hennebert and Tim Gohrke of Friends of Skagit Beaches discuss Thursday the results of a stormwater sample analyzed on the shore of Fidalgo Island. 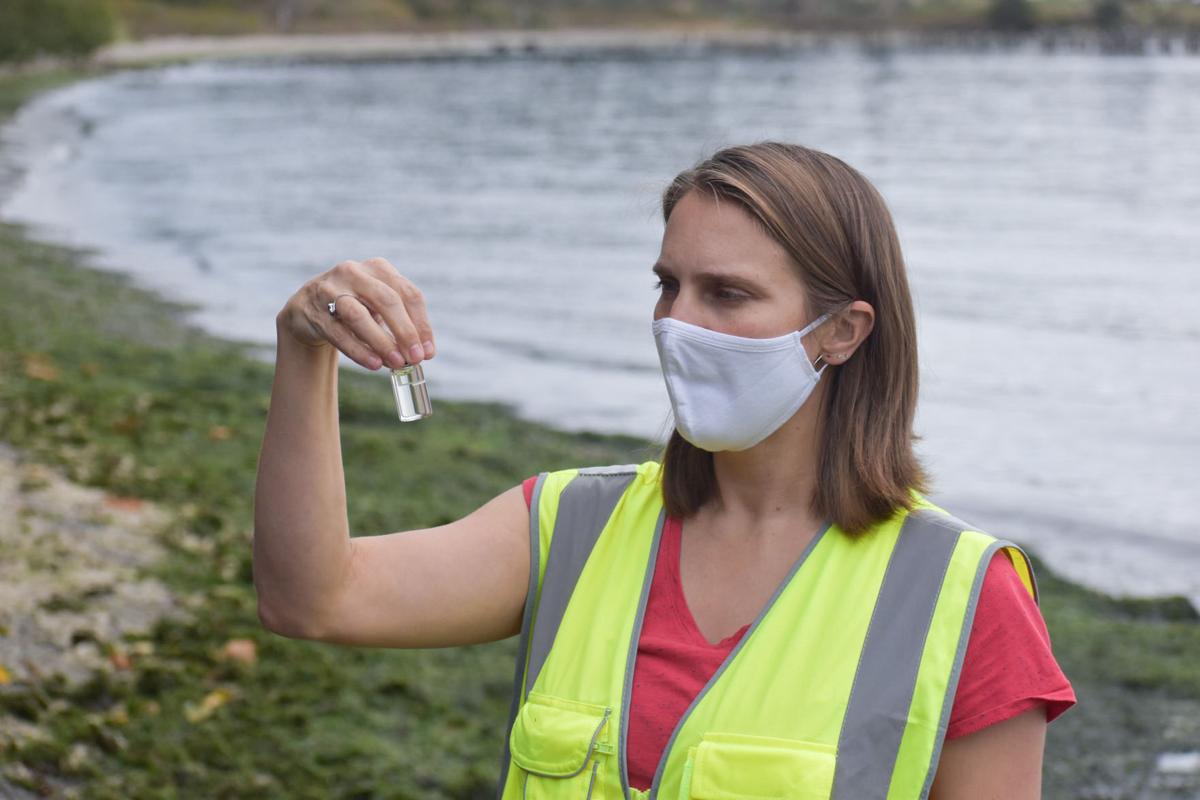 Anacortes Stormwater Program Manager Diane Hennebert holds up a small sample of water taken Thursday from a stormwater outfall on the shore of Fidalgo Island. 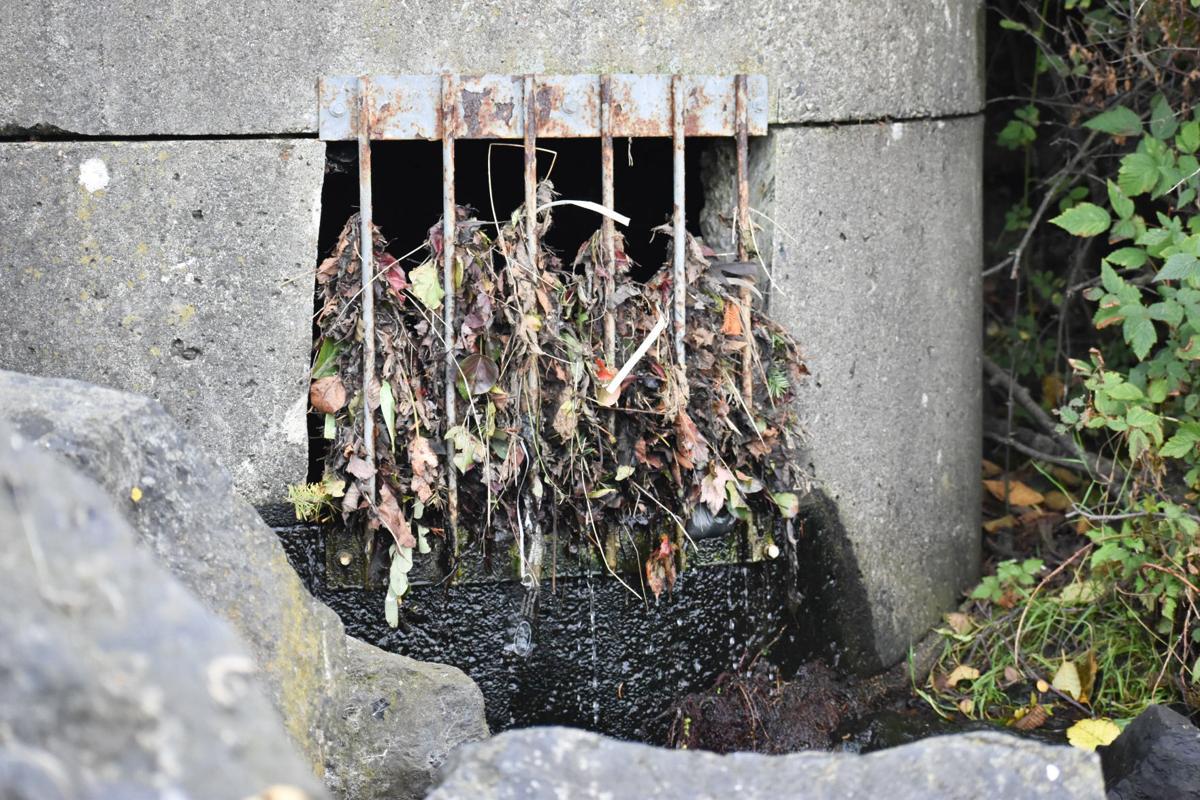 Water drips Thursday from a stormwater outfall on the shore of Fidalgo Island.

Anacortes Stormwater Program Manager Diane Hennebert and Tim Gohrke of Friends of Skagit Beaches discuss Thursday the results of a stormwater sample analyzed on the shore of Fidalgo Island.

Anacortes Stormwater Program Manager Diane Hennebert holds up a small sample of water taken Thursday from a stormwater outfall on the shore of Fidalgo Island.

Water drips Thursday from a stormwater outfall on the shore of Fidalgo Island.

ANACORTES — At a spot on the beach where the Guemes Channel Trail begins and state ferries are seen coming and going, a concrete structure with a metal grate protrudes from the shoreline.

There are dozens like it along beaches encircling the city of Anacortes, and each funnels stormwater from roads, roofs and lawns into the saltwater that surrounds the city.

Unlike wastewater that leaves the plumbing of buildings following each shower, flush of a toilet and load of laundry, stormwater is not routed to a treatment plant for cleaning before being released.

Despite the federal Clean Water Act, stormwater is also not closely monitored, in part because there’s not enough government funding and manpower to do so.

“It’s by and large an unwatched situation across the country,” Friends of Skagit Beaches President Tim Gohrke said.

Gohrke has devised a plan — with the help of Anacortes Stormwater Program Manager Diane Hennebert, the Samish Indian Nation’s Natural Resources Department and a $20,000 grant from the Rose Foundation — to change that.

Volunteers are being recruited to monitor the city’s 79 stormwater outfalls once a month.

Using water sampling equipment purchased with some of the grant funding, stormwater will be analyzed on site for dissolved oxygen content, acidity, temperature, turbidity and conductivity. The city will analyze the samples for fecal coliform bacteria.

The data will be catalogued and provided to the city, as well as be made available to the public through an online map.

Gohrke, who learned about stormwater through a program offered by the Skagit Conservation District, tested the new equipment for the first time Thursday alongside Hennebert.

“It worked! If they were cookies they’d still be hot,” he said of the results, which took less than 10 minutes to obtain.

To the naked eye, the trickle of water dripping from the storm drain Thursday was as clear as tap water. The official turbidity — how clear or murky the water is — was logged at an acceptable value, too, along with healthy levels of oxygen, acidity, conductivity and temperature.

“Everything is within our thresholds,” Hennebert said.

While it’s part of Hennebert’s job to keep an eye on stormwater outfalls to ensure the city is in compliance with its National Pollutant Discharge Elimination System permit, she isn’t able to conduct routine monitoring the way volunteers soon will.

The permit, required under the Clean Water Act and overseen by the state Department of Ecology, requires the city to screen 12% of its 79 outfalls — or about 10 of them — each year. Screening entails visiting an outfall once during the year to sample water quality.

“That’s just one snapshot in time,” said Hennebert, who strives to exceed the 12% requirement each year.

The information from the new monitoring project will create a more complete picture of the city’s stormwater — whether polluted or pristine — during various seasons and weather conditions, and could direct Hennebert’s focus to problem areas.

“It’s extremely valuable to have as much information as we can about what’s coming out of our stormwater system,” Hennebert said. “I’m one person and I have a limited budget, so I want to be as efficient as I can.”

The Rose Foundation grant is meant to support the monitoring project for two years, but Gohrke said there is already interest from a regional organization to help continue the effort beyond that, and if it proves successful to replicate it elsewhere in Puget Sound.

The project partners are hoping to show that more routine stormwater monitoring is possible with an investment in equipment and support from volunteers.

As for the clean sample seen during Thursday’s test run, Gohrke said he’s eager to see how samples from other sites — and following heavy winter rain — compare.

“We may find that that’s the case all around the island. We could have the cleanest water in the world. We just don’t know,” he said.