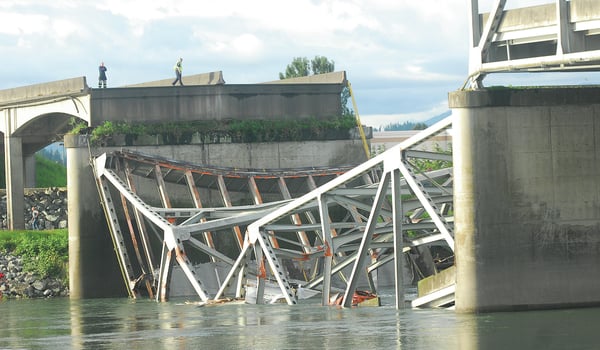 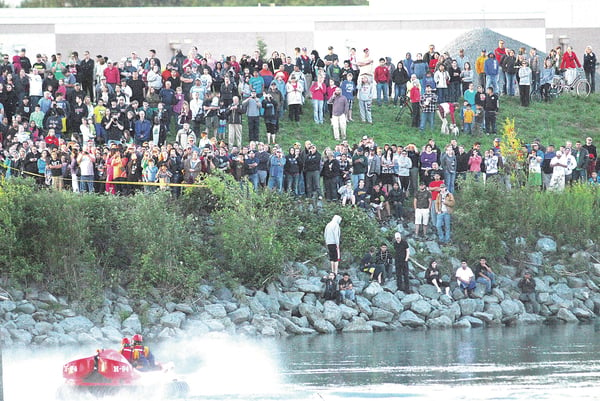 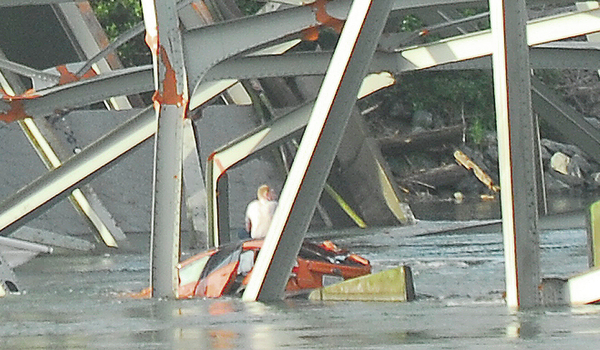 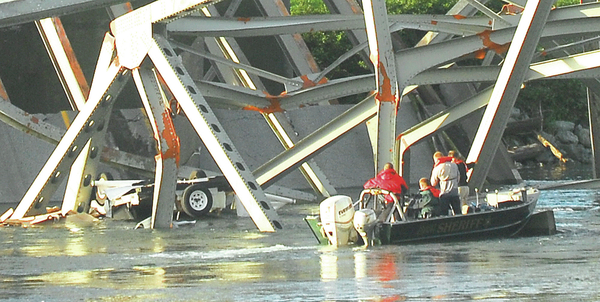 No one is known to have died, but vehicles plunged into the water and three people were taken to the hospital after the Skagit River Bridge on Interstate 5 collapsed Thursday evening.

The state Department of Transportation said its engineers are looking into an oversized, overheight vehicle striking a critical portion of the bridge span, spokesman Travis Phelps said.

A large flatbed truck passed under the bridge, hitting several of the steel trusses on its way, Trooper Mark Francis of the State Patrol said. The truck came to a stop about 100 yards away from the structure on its south side, he said.

The National Transportation Safety Board will also investigate the collapse.

The bridge, built in 1955, was listed as functionally obsolete in 2000 and 2010, according to the National Bridge Inventory. However, it was not considered deficient and had been inspected as recently as last fall, according to reports.

The four-lane northern span of the 1,111-foot-long steel-and-concrete bridge between Burlington and Mount Vernon gave way at 7:04 p.m., sending two vehicles, a pickup truck pulling a travel trailer and a car into the water along with their passengers.

Emergency response crews flocked to the area shortly after the first calls came in reporting the collapse. Police, fire, the State Patrol and Sheriff’s Office worked to divert traffic away from the bridge. Meantime, three rescue boats could be seen from the sides of the river, along with privately owned boats, trying to pull survivors out of the water.

One man sat on the top of his vehicle in the river, waiting as rescue crews helped him to shore. When he reached dry land, the crowd standing nearby applauded.

Three people were pulled out of the water and transported to area hospitals.

Law enforcement worked to move traffic around and away from the site and set up police tape on the riverbank to keep onlookers at a distance. Troopers could be seen turning drivers away as they headed north and southbound on I-5 toward the bridge. Traffic was eventually diverted heading north to the Kincaid Street exit in downtown Mount Vernon, and heading south, to Highway 20 to avoid the site.

Burlington City Administrator Bryan Harrison said Thursday that the cities and the county are working on a locals-only transportation plan to keep traffic moving while the bridge is out of commission.

Daryl Hamburg, manager of operations for Dike District 12, said cell phones weren’t working for a while after the collapse, except for texts. Onlookers crowded on the banks of both sides of the river to watch the rescuers at work.

Two Dike District workers went out on a boat to help search and rescue operations.

“I’m not sure if anybody’s hurt,” Hamburg said at the time. “It’s hard to explain. It’s a spectacle.”

Businesses and residents in the area said their power flickered when the bridge collapsed, possibly from the impact.

One man, who had just crossed the bridge shortly before it collapsed, said he felt a vibration and looked in his rear view mirror to see that the section of bridge he had just crossed was no longer behind him.

“I thought something was wrong with my car at first,” the man told the reporter about feeling the vibration.

Skagit County Administrator Tim Holloran said Thursday night that the county expects to declare a state of emergency. It was not done immediately because two of the commissioners were out of state at the time of the collapse.

VIDEO: Bridge Collapse on I-5