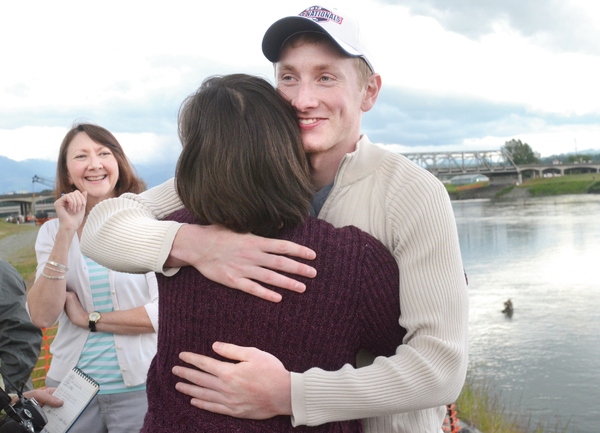 Bryce Kenning hugs Kris Hulet, the United General Hospital Xray technician who initially cared for him Thursday after he was plucked from the roof of his car in the Skagit River. Behind is his mother, Sheila. The Henning family met Hulet by chance when they went to the collapse site together Sunday evening. Scott Terrell / Skagit Valley Herald 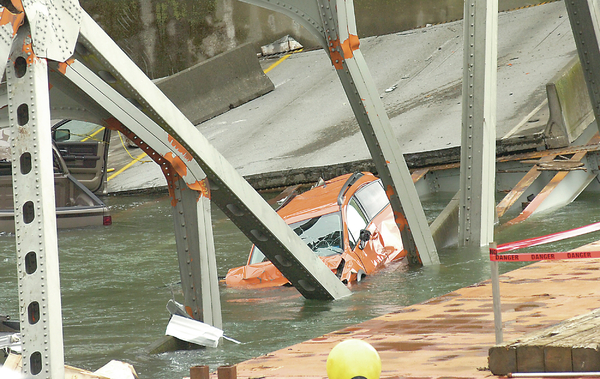 The car belonging to Bryce Kenning sits in the river at the north end of the Skagit River bridge at Interstate 5. Scott Terrell / Skagit Valley Herald 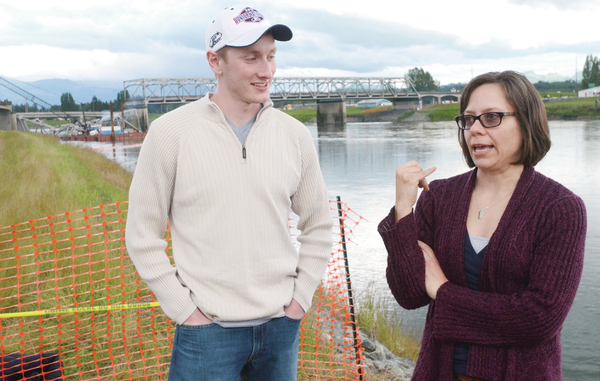 Bryce Kenning talks with United General Hospital Xray technician at the Interstate 5 bridge over the Skagit River. The Henning family met Hulet by chance when they went to the collapse site together Sunday evening. Scott Terrell / Skagit Valley Herald 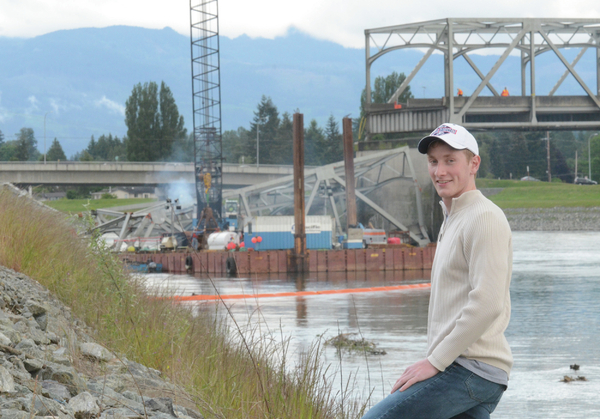 Bryce Kenning hugs Kris Hulet, the United General Hospital Xray technician who initially cared for him Thursday after he was plucked from the roof of his car in the Skagit River. Behind is his mother, Sheila. The Henning family met Hulet by chance when they went to the collapse site together Sunday evening. Scott Terrell / Skagit Valley Herald

The car belonging to Bryce Kenning sits in the river at the north end of the Skagit River bridge at Interstate 5. Scott Terrell / Skagit Valley Herald

Bryce Kenning talks with United General Hospital Xray technician at the Interstate 5 bridge over the Skagit River. The Henning family met Hulet by chance when they went to the collapse site together Sunday evening. Scott Terrell / Skagit Valley Herald

MOUNT VERNON — Twice his mother told him to be safe while driving as he left for Bellingham on Thursday evening, and Bryce Kenning thought nothing of it.

He turned his orange Subaru north onto Interstate 5 like he had hundreds of times before.

An avid hockey player and a forward with the Bellingham Blazers, his heart and mind were already on the ice in Bellingham. He was probably running a few minutes late to make a 7:30 p.m. drop-in hockey game, but he didn’t rush.

Then halfway across the Skagit River Bridge, Kenning saw an explosion of dust and the trusses collapsing just 30 feet ahead of him. He slammed on the brakes, but immediately knew he wouldn’t stop in time.

On Sunday, three days after his fateful plunge into the Skagit River after the bridge’s collapse, Kenning recounted his tale as he already has many times to friends, family and other media. His story is filled with many “what ifs.”

As he approached the edge, adrenalin surged through his body. Time expanded as his car took a nose dive off of the edge of the bridge.

“Honestly it took maybe three seconds to get to the water, but it was the longest three seconds of my life,” Kenning, 20, said. “It’s amazing how much you can think about in that amount of time.”

The car plunged into the river and, Kenning watched in horror as the car quickly filled with water up to his waist. It was bone-chilling cold, and he tried to kick out the windshield as he’s seen actors do in movies. After two powerful kicks and no result, he refocused.

The water wasn’t coming in that fast; he had time to get out. With a powerful kick, the passenger-side door slammed open, and he climbed on top of the orange Subaru’s crumpled roof.

He looked around and saw another man, Dan Sligh of Oak Harbor, who was worried about his wife.

Bryce was concerned that his car might shake loose of the trusses and sink further.

“Should I make a jump for it and swim?” Kenning said. “I’ve heard the stories of people drowning. Obviously it’s a powerful river, and it’s cold as hell. I was freezing.”

Once he realized the car would stay put, he had another thought as he looked up at the bridge deck: “Hopefully there’s no cars flying in after me.”

Emergency crews and firefighters showed up quickly and asked how he was doing. Meanwhile, Kenning was soaking wet and freezing cold. He worried that the adrenalin surge might mask a serious injury, and he might not be able to play hockey again.

In the 45 minutes it took for a rescue boat to remove Kenning from the top of his orange car, he thought of all of the “what ifs.”

What if he had left a little bit earlier?

What if he was just a few seconds ahead and the car flipped upside down instead?

What if he had relented to the pleas of his 15-year-old sister, Claire, to let her go with him to Bellingham?

“She was just trying to get her hockey fix,” Kenning said. “It’s a good thing she wasn’t with me.”

He focused on surviving.

“You think about your friends and family,” he said. “I’m not going to leave behind my little sister and my parents, who have done so much for me.”

When the rescue boat arrived, “It was the greatest feeling.”

Kenning climbed in, cold and shaking uncontrollably. As he got onto the boat, he gave Sligh a thumbs-up. Sligh, a chief petty officer in the Navy, returned a salute.

Kenning was whisked away in an ambulance to United General Hospital, where they started testing him and hooking him up to machines. Kris Hulet, a technician in the radiology department, had just come on shift after receiving a call from home. She had seen the young man on the roof of his orange car, and here he was in front of her.

Overwhelmed, Hulet asked him if it was OK to pray with him. She grabbed his hand.

“Once she said a prayer with me, I almost felt it was more than just her praying,” Kenning said. He’s seen the pictures of the spontaneous prayer circles in front of the bridge moments after its collapse.

His family, meanwhile, had no idea he had fallen with the bridge. His mother, Sheila, a pediatric nurse practitioner with Skagit Regional Clinics, said she remembers telling him to drive safe — twice. The phone rang in her house, but she was so engrossed in reading news about the Oklahoma tornado that she ignored it. The phone rang again, then again. She picked it up and saw it was from her son’s best friend’s mother.

“She said ‘The Skagit Bridge just collapsed, and we think Bryce’s orange car is in the river,” his mother said.

She knew he was headed north. She knew the timing was about right. She knows the way to Bellingham.

She dropped the phone and took off in her husband’s stick-shift to Skagit Valley Hospital. Afraid of what she would hear, she left the radio off.

“You’re having this conversation with God the whole way,” she said.

She ran through the Emergency Room doors and waited. people milled about in front of the television, and another man was trying to kick people out. Then an ambulance driver recognized her and told her Kenning was at United.

She left down a crowded Highway 20 toward the hospital. At that time, her son borrowed a cell phone — his is somewhere in the river — and called his mother.

His sister, Claire, had also been frantically trying to get any news of her brother’s condition. A friend had texted her of the bridge collapse — and that his distinctive car was in the water.

Her father, Barrie, who was working out with her at the YMCA in Everett, told her to calm down and stop crying. What are the chances? Ten minutes later, Sheila called her daughter to give her the good news.

Bryce Kenning said he couldn’t sleep at all Thursday night. Every time he closed his eyes, he saw an explosion of dust and falling trusses.

“I’m really hoping that’s not a long-term thing,” he said.

He has reunited with some who helped save his life. And on Sunday, as he made a spontaneous trip to Burlington with his family to see the crumpled remains of the bridge, Hulet, the United General Radiology technician, happened also to be there to look at the bridge. They shared a big hug at the crest of the levee, and Hulet beamed.

Sheila Kenning said since the crash and her son’s safe return, she’s thought of how many mothers cross that bridge with babies in the back seat.

“There were so many miraculous moments. There were two strong men, one who rescued his wife and two men who rescued themselves,” she said. “The forces of nature and God and powerful forces allowed them to be trapped, which was somewhat protective, intead of floating down the river.”