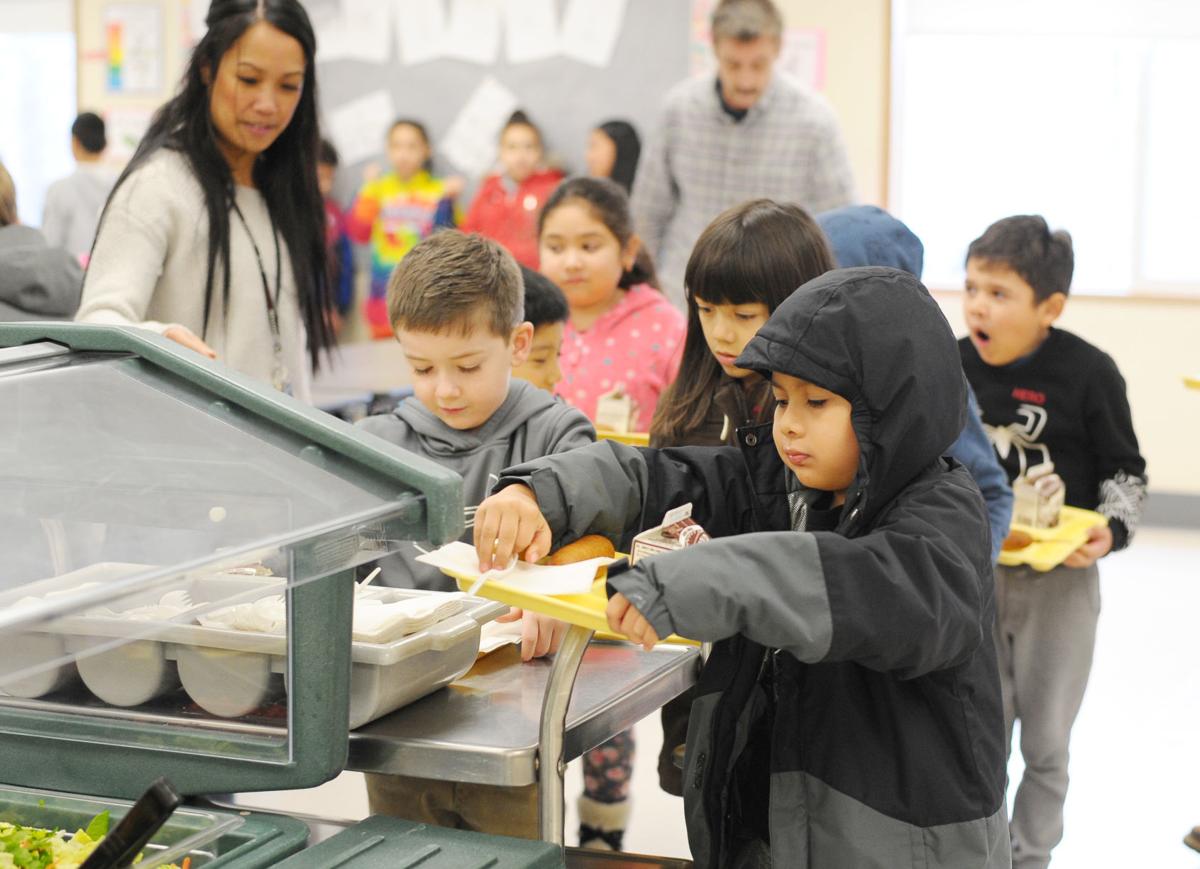 First grader Jonathan Villanueva, 6, grabs a napkin Tuesday during lunch at West View Elementary School. Because of the size of the cafeteria and the number of students at the school, the school has five lunch periods spanning more than two hours. 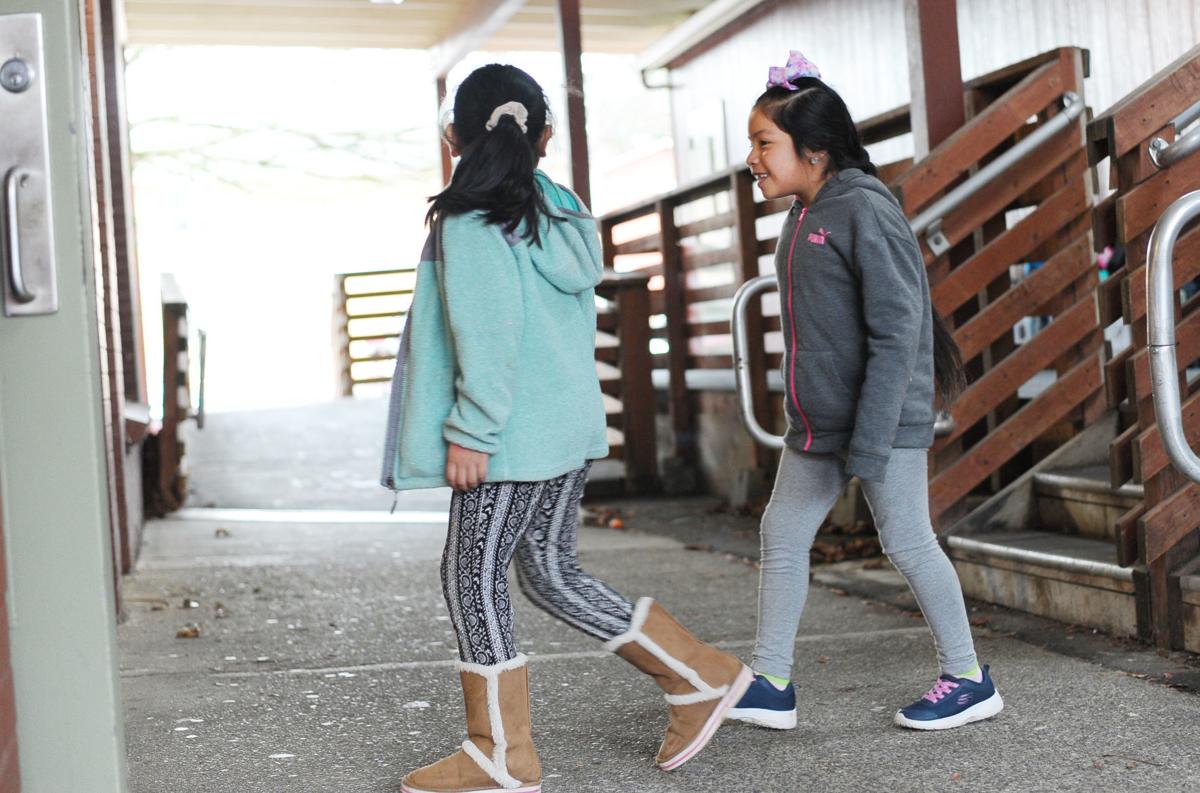 West View Elementary School students leave the lunchroom and head back into the main building after lunch. The cafeteria is in a portable on the campus, with a covered area between the two buildings. 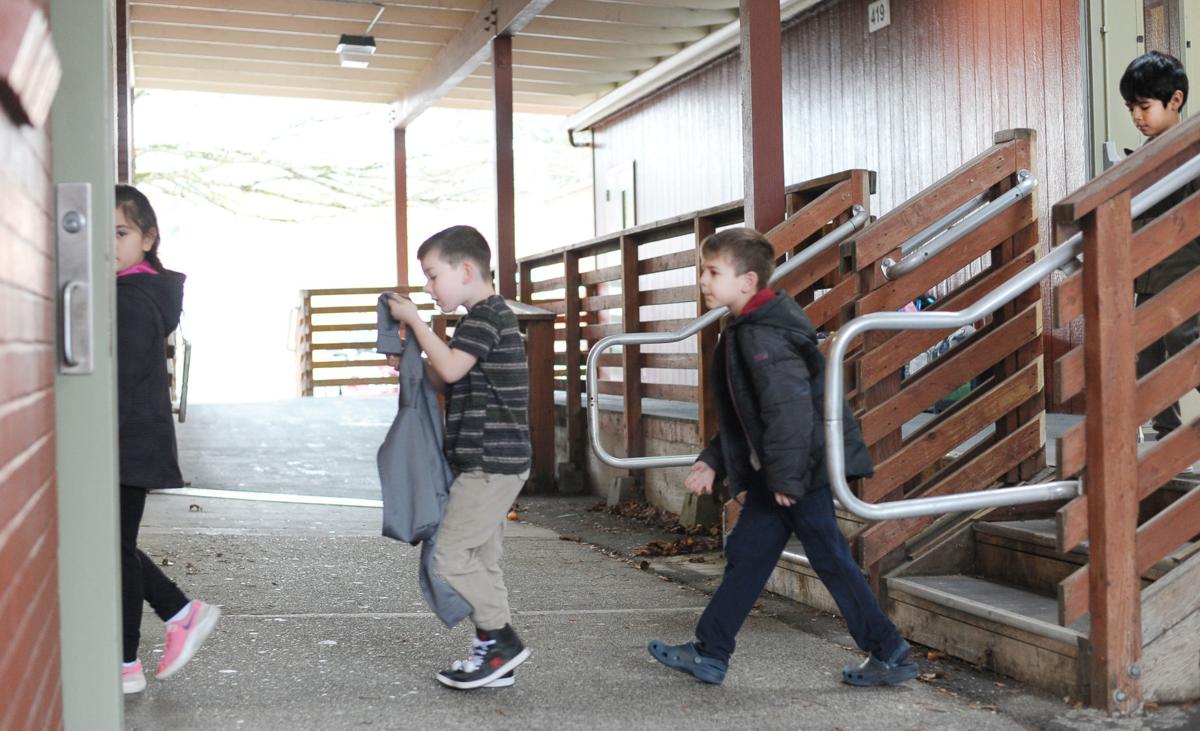 West View Elementary School first-graders leave the lunchroom Tuesday and head back into the main building after lunch. In the distance is the school's parking lot. 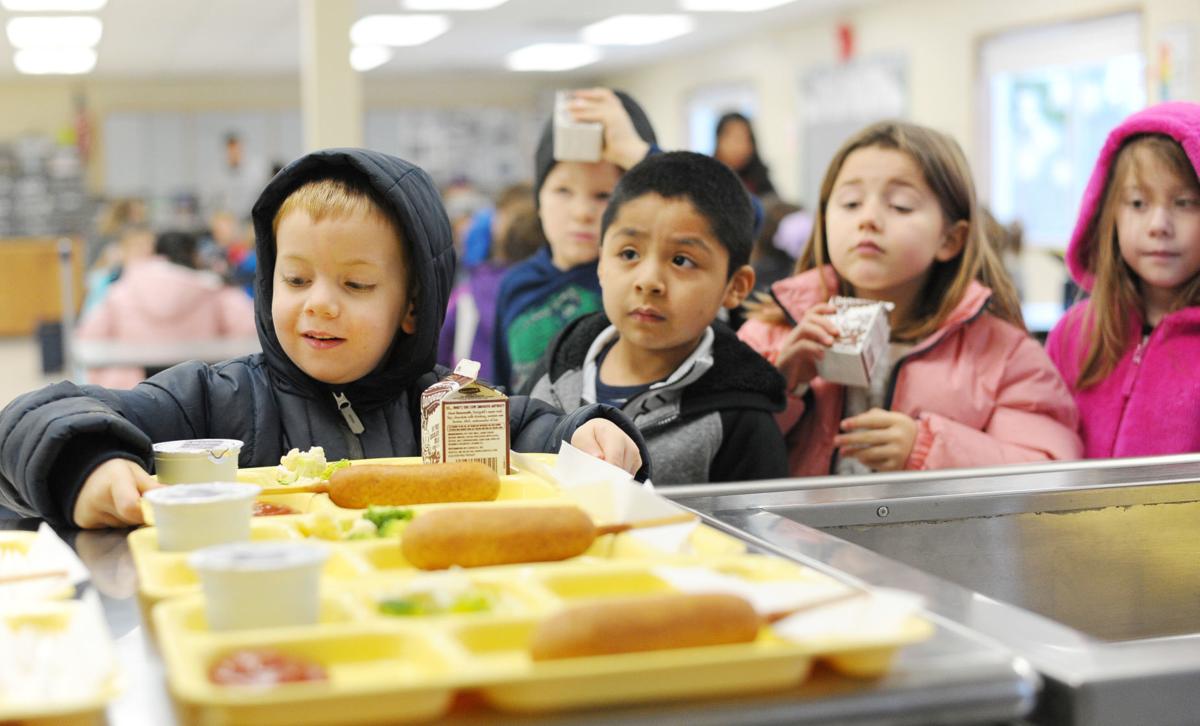 First grader Jonathan Villanueva, 6, grabs a napkin Tuesday during lunch at West View Elementary School. Because of the size of the cafeteria and the number of students at the school, the school has five lunch periods spanning more than two hours.

West View Elementary School students leave the lunchroom and head back into the main building after lunch. The cafeteria is in a portable on the campus, with a covered area between the two buildings.

West View Elementary School first-graders leave the lunchroom Tuesday and head back into the main building after lunch. In the distance is the school's parking lot.

With more than 400 students in kindergarten through the sixth grade, the lunchroom — which is a standalone portable outside the rest of the school — has a constant stream of students.

“West View is our oldest building and is dealing with some challenging facilities,” district Executive Director of Learning and Communications Todd Setterlund said.

Over the years, the school’s staff has learned to manage the chaos of up to 100 students in each of five lunch periods in a building that has no restrooms.

Bringing that many kids in and out of the portable has its challenges, Principal Tamara Skeen said.

“The biggest concern for me is safety,” she said. “The concern with our cafeteria is that kids have to exit our building. It’s not a contained area.”

A more effective lunch space at West View is one of the things the Burlington-Edison School District is hoping to address as it asks voters to consider a bond proposal in the Feb. 11 special election.

“The longer we delay these projects, the more expensive they’re going to get,” Setterlund said.

For the election, the district will ask voters to decide on two issues: an $89 million bond proposal that would be used largely to build a middle school, and a two-year $20.8 million replacement educational programs and operations (EPO) levy that will help the district continue operating at its current level.

It is the second time the district is asking voters to approve a bond to build a middle school and fund other projects.

Last February, a $98.3 million bond proposal failed with about 53% of the vote. Bonds require 60% approval to pass.

This new bond proposal is a pared-down version of the previous one, but still centers on building a middle school to house the district’s seventh and eighth graders.

Districtwide, the K-8 system has put infrastructure burdens on the buildings, and limited the options of elective classes for middle school students, Setterlund said.

“Depending on where our students go to seventh and eighth grade, they have significantly different experiences,” he said.

Moving to a middle school would allow the district to offer more middle school electives and would better prepare students for high school, school board President Troy Wright said.

“We could do a better job preparing our middle grade students to be ready for the high school experience,” Wright said. “They’re behind the curve.”

As a parent of two, Wright said the K-8 system is part of what attracted him to the district.

But after years of research, the district has decided a more traditional model would better suit its students.

“We’re asking (voters) for a paradigm shift,” Wright said. “That’s a hard thing to do. But we have to provide our kids with the best opportunities and that’s not just in electives, that’s in core curriculum, to get them to a point where they are prepared to enter high school and be successful.”

“I think the challenge is we’re in a spot where we have to shift directions,” Wright said. “We have an infrastructure in place in the K-8 system now that is overburdened just from the capacity.”

The middle school would be built where the alternative high school Burlington-Edison North High School sits. Those students would move to the district office, where they could have their own identity outside the shadow of the traditional high school.

“Having that campus off-site provides it an opportunity to be its own school,” Setterlund said. “It creates the opportunity for students who are really drawn to Burlington-Edison North for the alternative experience.”

At a cost of $2.50 per $1,000 in assessed property value — the maximum allowed by the state after changes in education funding — the replacement EPO levy would fund things such as extracurricular activities, nurses and counselors, and the district’s dual language program.

That levy, Wright said, helps fill the gap between what the state pays for and the actual costs of education, for example, the gaps in funding for special education.

“The McCleary decision helped, but it didn’t solve everything,” Setterlund said. “It still put it on districts to ask taxpayers for help.”

The EPO levy constitutes about 20% of the district’s budget, he said.

“The burden on that checkbook is the same,” Wright said. “I lose 20% of my income and a lot of things are going to change.”

If the levy doesn’t pass, the Burlington-Edison School Board will likely have some tough decisions to make, he said.

“That could have catastrophic consequences,” Setterlund said. “We would really have to look at some pretty drastic cuts.”

Levies require a simple majority — 50% plus one — to pass.