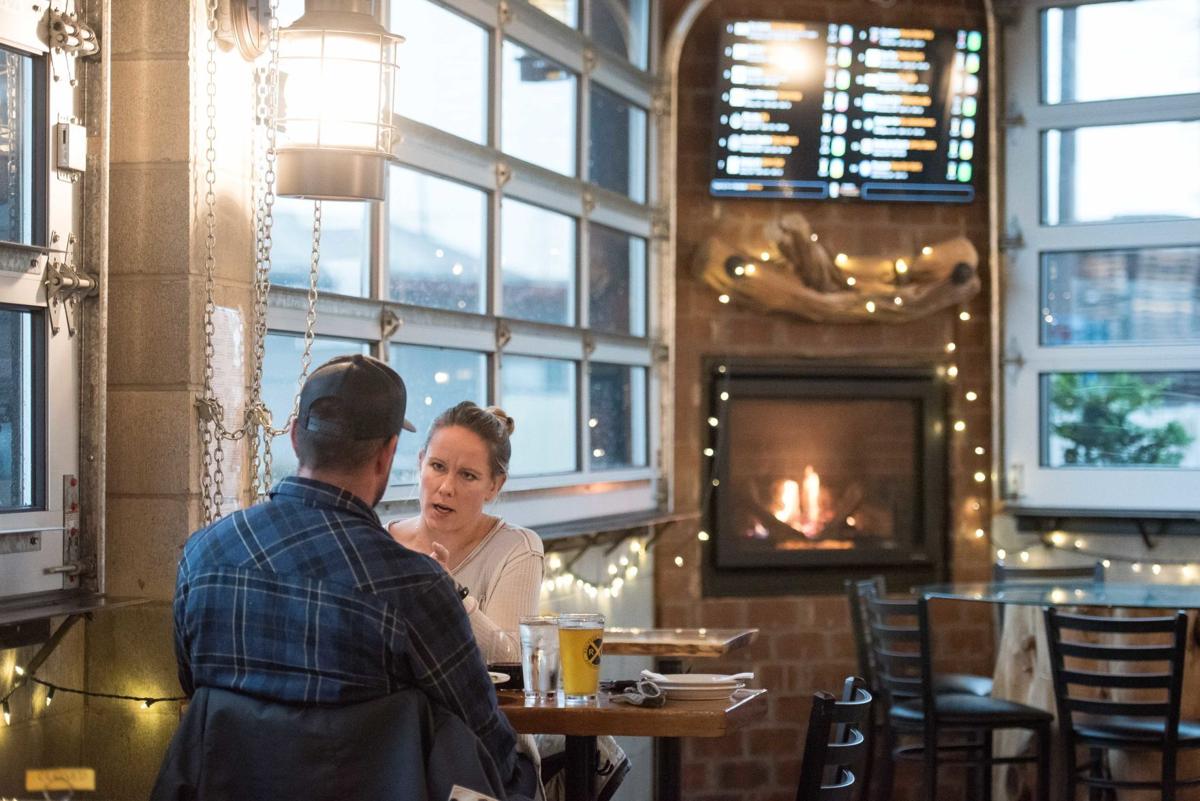 Kristin Crandall (right) and Brandon Crandall eat Monday at Railroad Pub and Pizza in Burlington. The siblings were eager to support a local business before new COVID-19 restrictions go into effect. 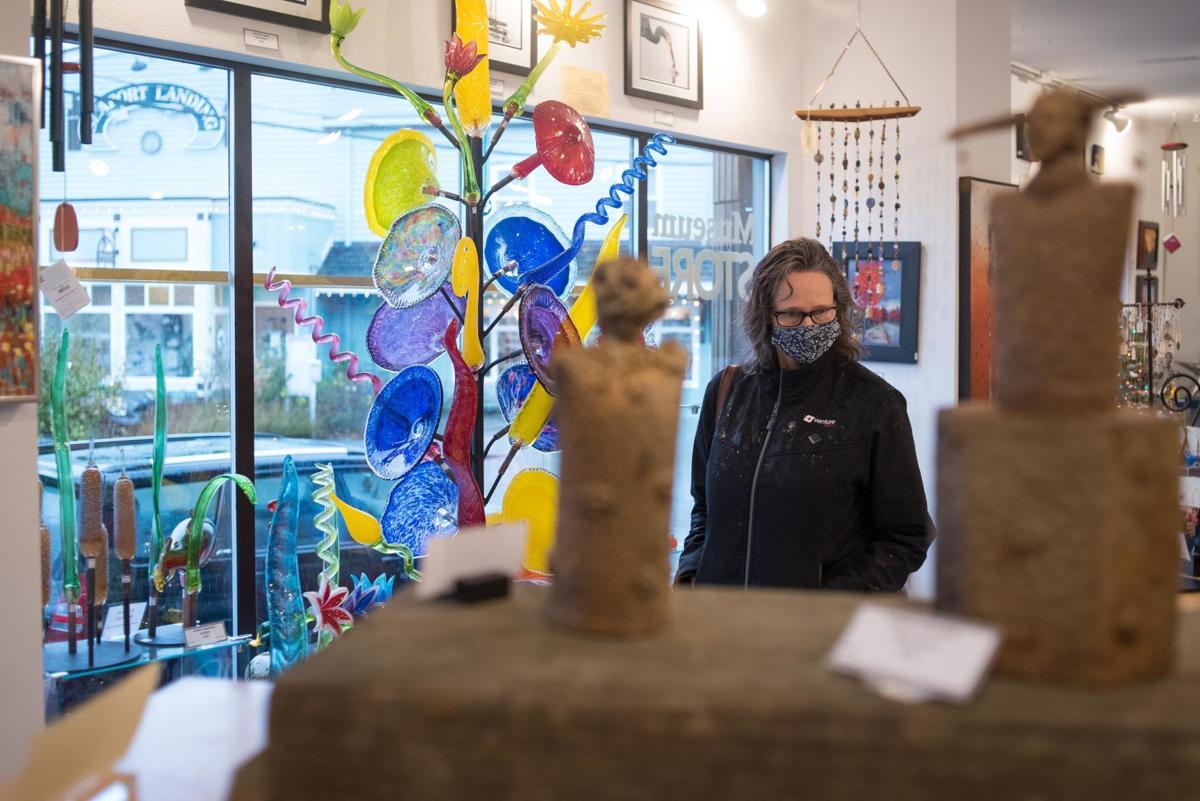 Jane Peak of Anacortes looks at art Monday while shopping at the Museum of Northwest Art store in La Conner. Under new COVID-19 restrictions, the museum gallery will close but the retail store can stay open. 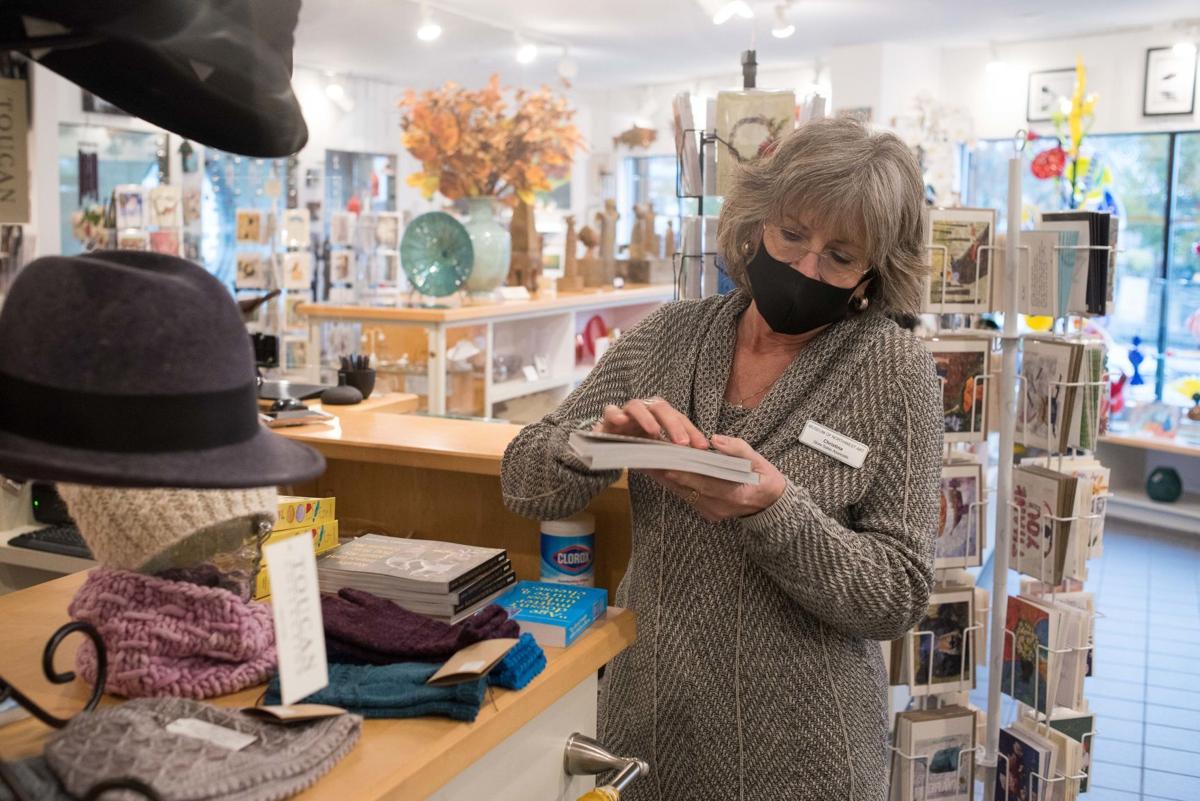 Christina Pearson, a sales associate at the Museum of Northwest Art store in La Conner, organizes a shipment of books Monday. 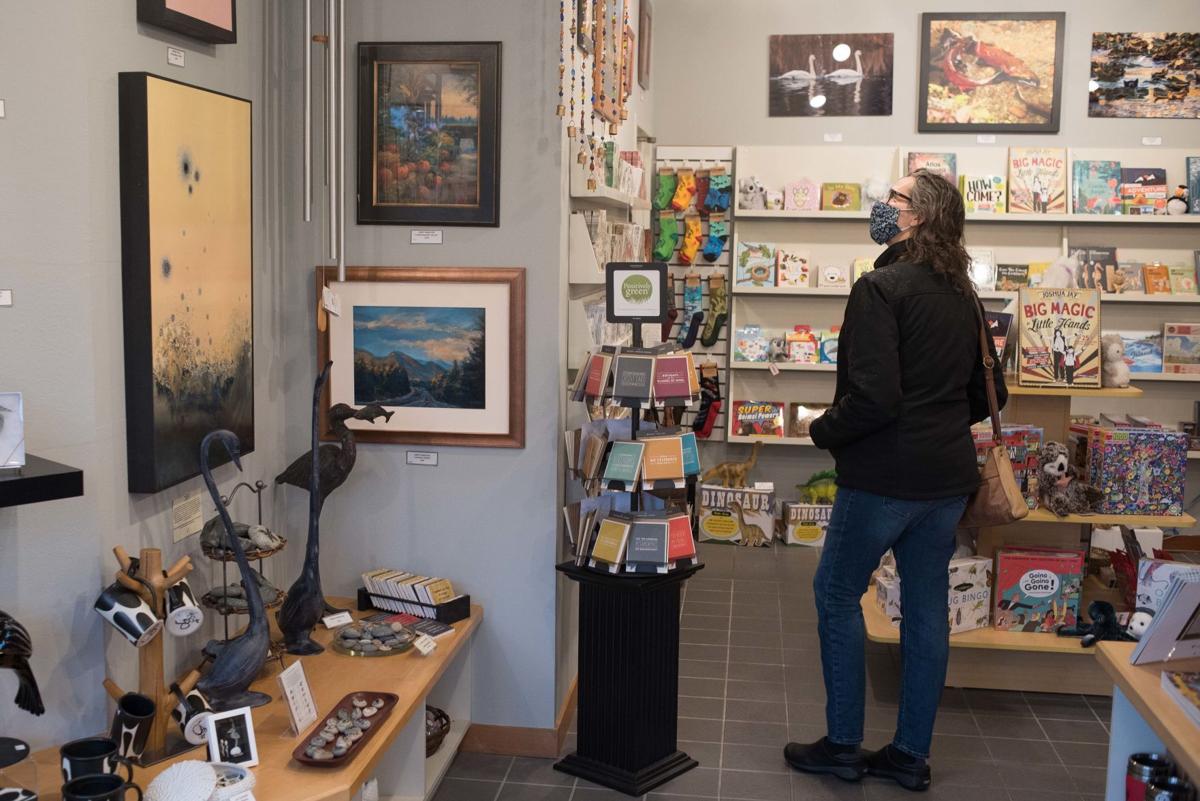 Jane Peak of Anacortes looks at art while shopping Monday at the Museum of Northwest Art store in La Conner.

Kristin Crandall (right) and Brandon Crandall eat Monday at Railroad Pub and Pizza in Burlington. The siblings were eager to support a local business before new COVID-19 restrictions go into effect.

Jane Peak of Anacortes looks at art Monday while shopping at the Museum of Northwest Art store in La Conner. Under new COVID-19 restrictions, the museum gallery will close but the retail store can stay open.

Christina Pearson, a sales associate at the Museum of Northwest Art store in La Conner, organizes a shipment of books Monday.

Jane Peak of Anacortes looks at art while shopping Monday at the Museum of Northwest Art store in La Conner.

Businesses in Skagit County braced Monday for the arrival of new restrictions issued by Gov. Jay Inslee to slow the spread of COVID-19.

Inslee announced a bevy of new measures Sunday, including restrictions on social gatherings and businesses.

Starting at 11:59 p.m. Monday, a host of businesses had to close indoor services. This included fitness facilities and gyms, bowling centers, movie theaters, museums, zoos and aquariums. Retail stores — including grocery stores — were ordered to limit indoor capacity to 25%.

Beginning 12:01 a.m. Wednesday, restaurants and bars will be limited to takeout service and outdoor dining with tables of no more than five people.

The measures will remain in effect until Dec. 14.

The U.S. has recorded more than 10.8 million confirmed COVID-19 cases and over 245,000 deaths. Cases are rising throughout the country, and Skagit County set a one-day record Sunday with 49 new cases.

Representatives of several local businesses and organizations said Monday they weren’t shocked by the restrictions, nor will they be surprised if the restrictions are extended.

“We’re trying to be optimistic about Dec. 14 but that’ll be a stretch,” said Joanna Sikes, the executive director of the Museum of Northwest Art in La Conner.

Sikes said she was grateful the museum got vigorous support from the community when it was able to allow visitors in. She noted attendance for The Barn Show, an event commemorating annual art shows held on Fir Island, was an unexpectedly big hit even with robust safety protocols in place.

“We knew we’d never have an opening per se, so we opened our doors and within that weekend had 250 visitors. They came in groups of 10, then went back out again. It shows we still have people supporting us,” she said.

Lincoln Theatre Executive Director Roger Gietzen said the theater was able to hold in-person shows for a few weeks, but stopped of its own accord when COVID-19 cases began rising.

“It’s disappointing, but we went through this before at the beginning,” he said.

Gietzen said the theater is seeking guidance from Skagit County Public Health on other things the theater is doing, such as DVD rentals, popcorn sales and virtual concerts featuring local musicians.

“I hope the health department isn’t getting overwhelmed,” he said.

Skelton said the business is important to its clients.

“This is important for people’s health and well-being, and we’ve proven we can do it safely,” she said.

Skagit County spokesperson Laura Han said the county is sympathetic to the position businesses are in and is working with them to clarify the scope and details of the order.

“Gov. Inslee is making a science-based decision that will save lives,” she said.

Valley Shine co-owner Ben Lazowski said the distillery will still be able to sell alcohol — both at its Mount Vernon location and at local grocers — but restaurant operations will have to cease.

“Even at 50% it was too difficult to really break even. A bar and restaurant takes more than 50% of staff to operate at 50% capacity,” he said.

Nick Crandall, who owns Railroad Pub & Pizza and Train Wreck Bar & Grill in Burlington, was upset about the hit his businesses would take. He said the governor didn’t provide enough notice and the orders aren’t accompanied by a plan to help businesses that will struggle and employees who depend on them for income.

Of the 25% capacity retail businesses are allowed, Crandall said, “Does Inslee live off 25%?”

Industry leaders have warned that dramatic job losses may follow the shutdown of restaurants again.

In a press briefing Friday, Washington Hospitality Association CEO Anthony Anton said the state’s hospitality industry in April was down 191,000 jobs from the previous year. By September, as restaurants reopened, the industry had recovered about 100,000 of those jobs.

Anton said unlike last time, there is no additional federal unemployment benefits, unless Congress passes a second COVID-19 relief package. Work on an aid package appears to be stalled.

He said the industry will need other federal aid, such as a proposed $120 billion package for restaurants or a second round of Payment Protection Program (PPP) loans for small businesses.

Anton said the association estimated that up to 35% of the state’s restaurants may close permanently — and that estimate doesn’t factor in a second shutdown.

The state was under a stay-at-home order from March 23 until the end of May. All of Washington’s 39 counties have been paused in either the second or third phase of a four-stage reopening plan that began in early May to lift restrictions on businesses and other activities. The governor’s announcement Sunday temporarily rolls back all counties and places them under the same guidelines.