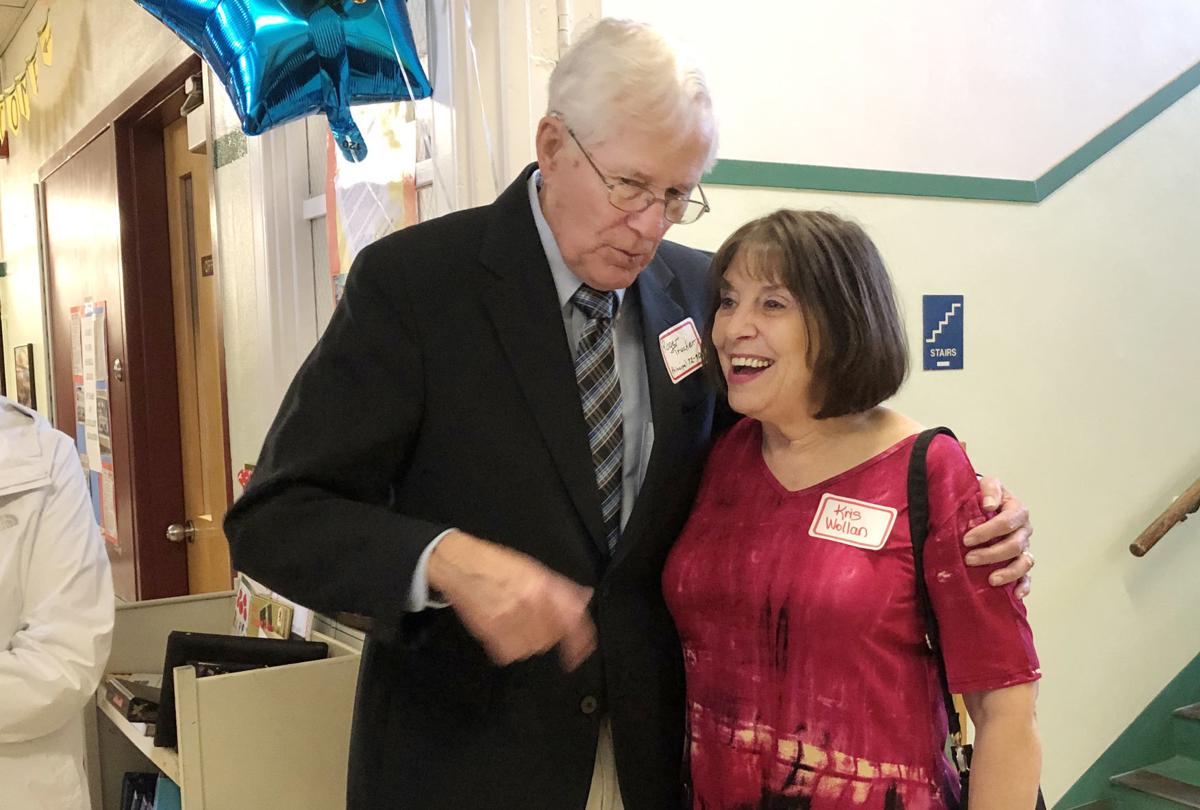 Former Lincoln Elementary School principals Roger Trucker and Kris Wollan greet each other Sunday during the farewell event for the school. 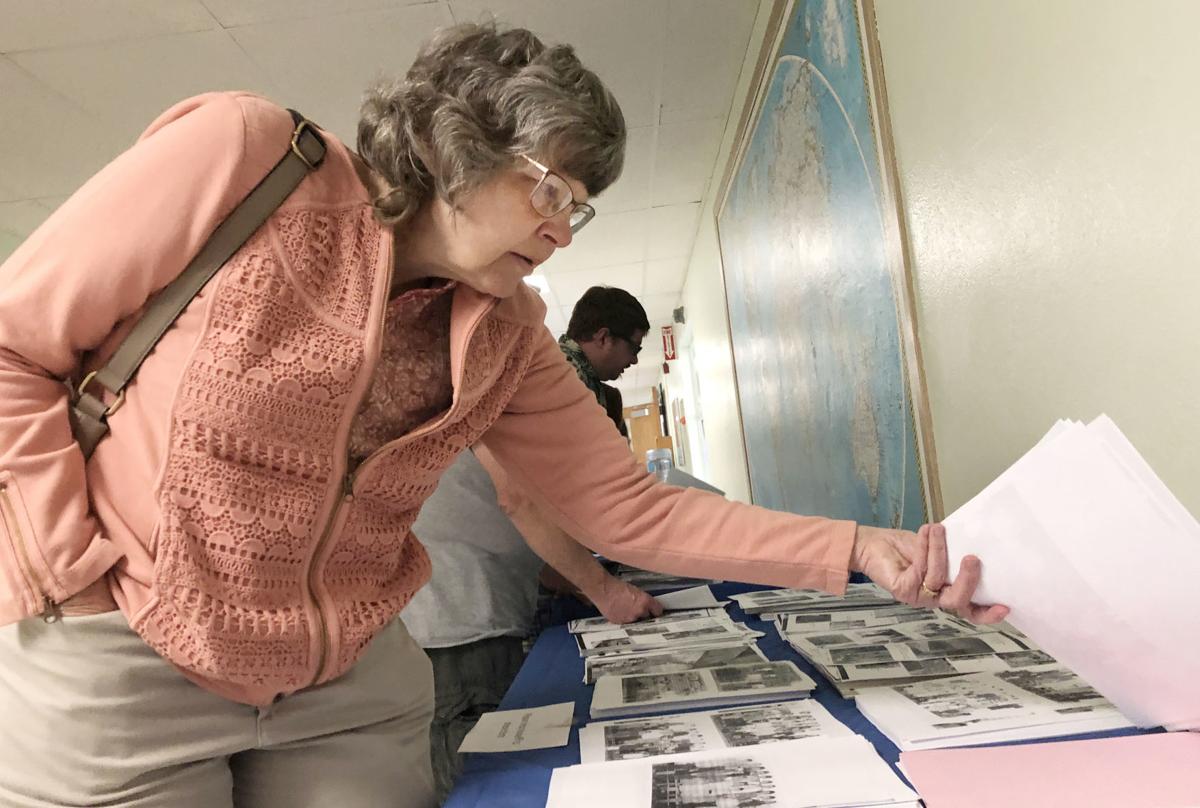 Roxy Romanelli looks through old photos to find a picture of herself from 1971 during the farewell event Sunday for Lincoln Elementary School. 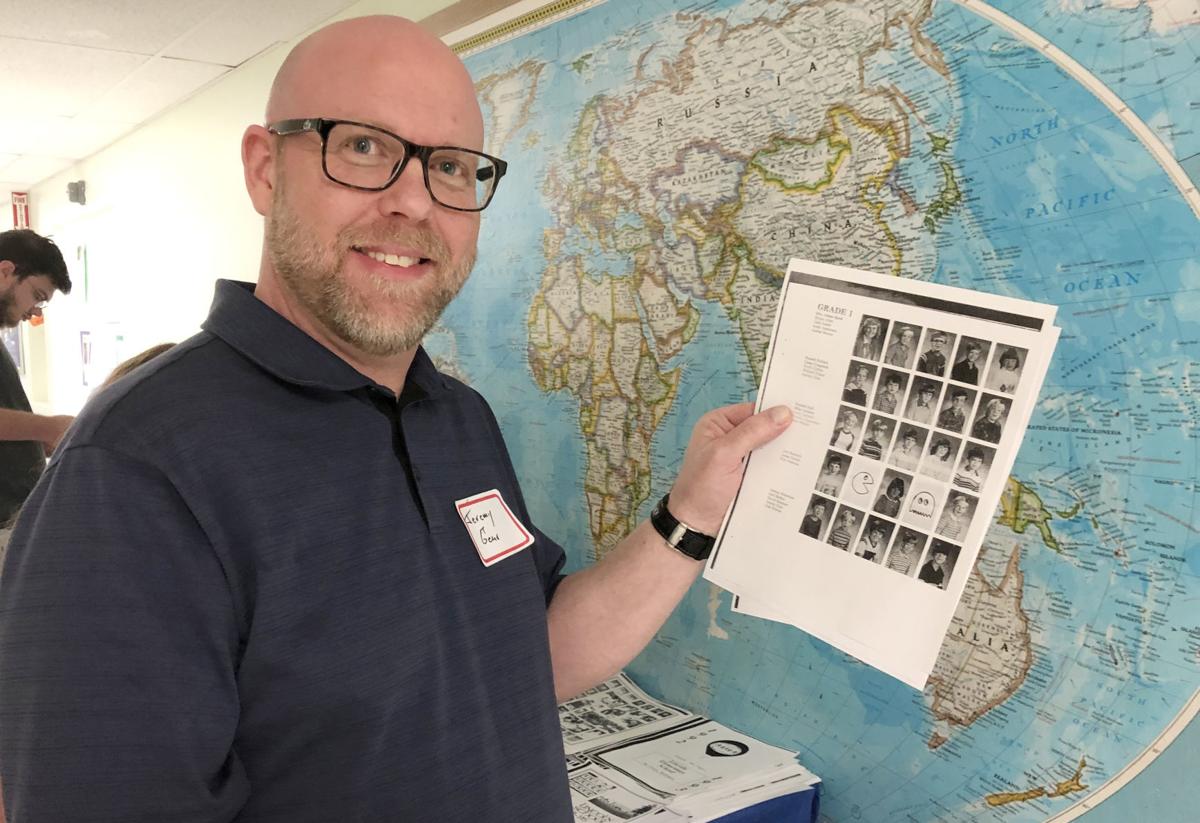 Jeremy Gear, who attended Lincoln Elementary School between 1982 and 1987, holds up a yearbook photo of himself that he found Sunday at the farewell event for the school. 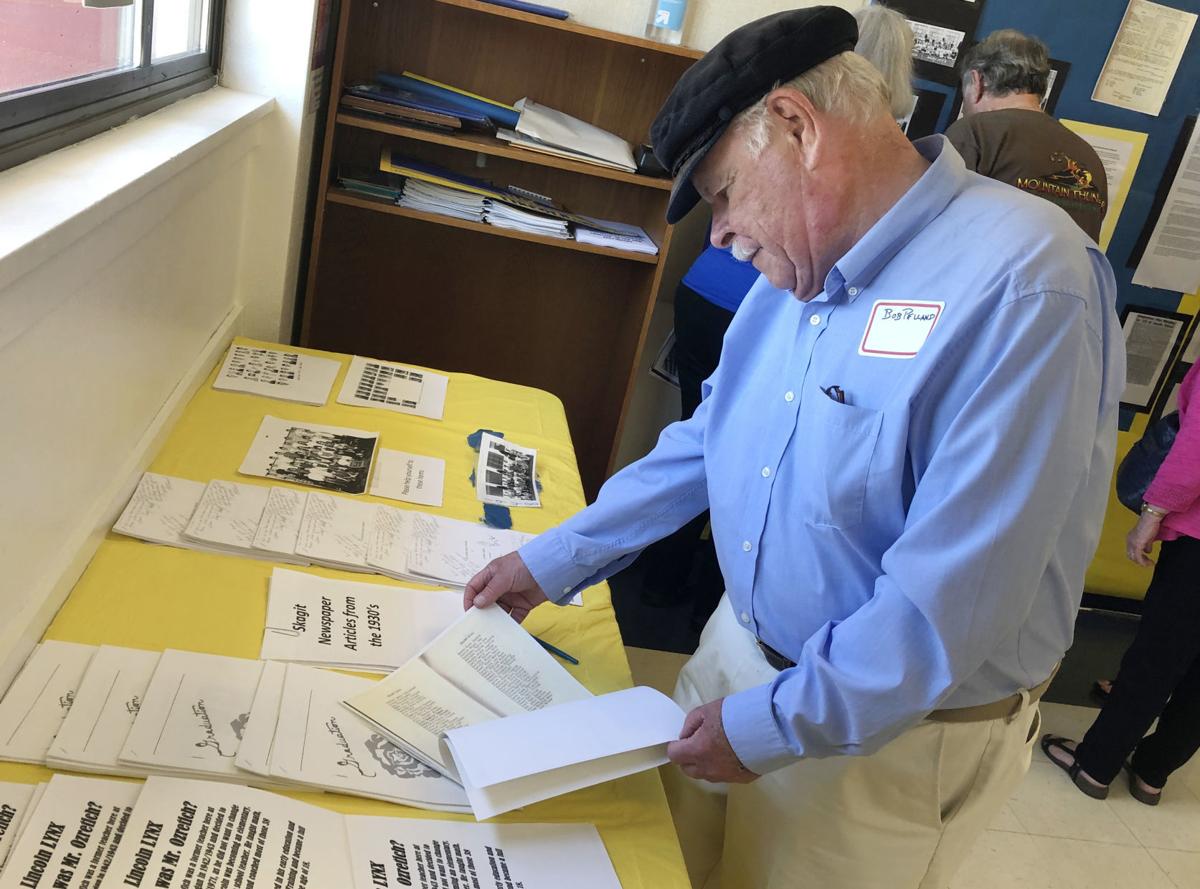 Bob Pelland, who attended Lincoln Elementary School between 1946 and 1950, looks at some of the historic documents that were on display Sunday during the farewell event for the school. 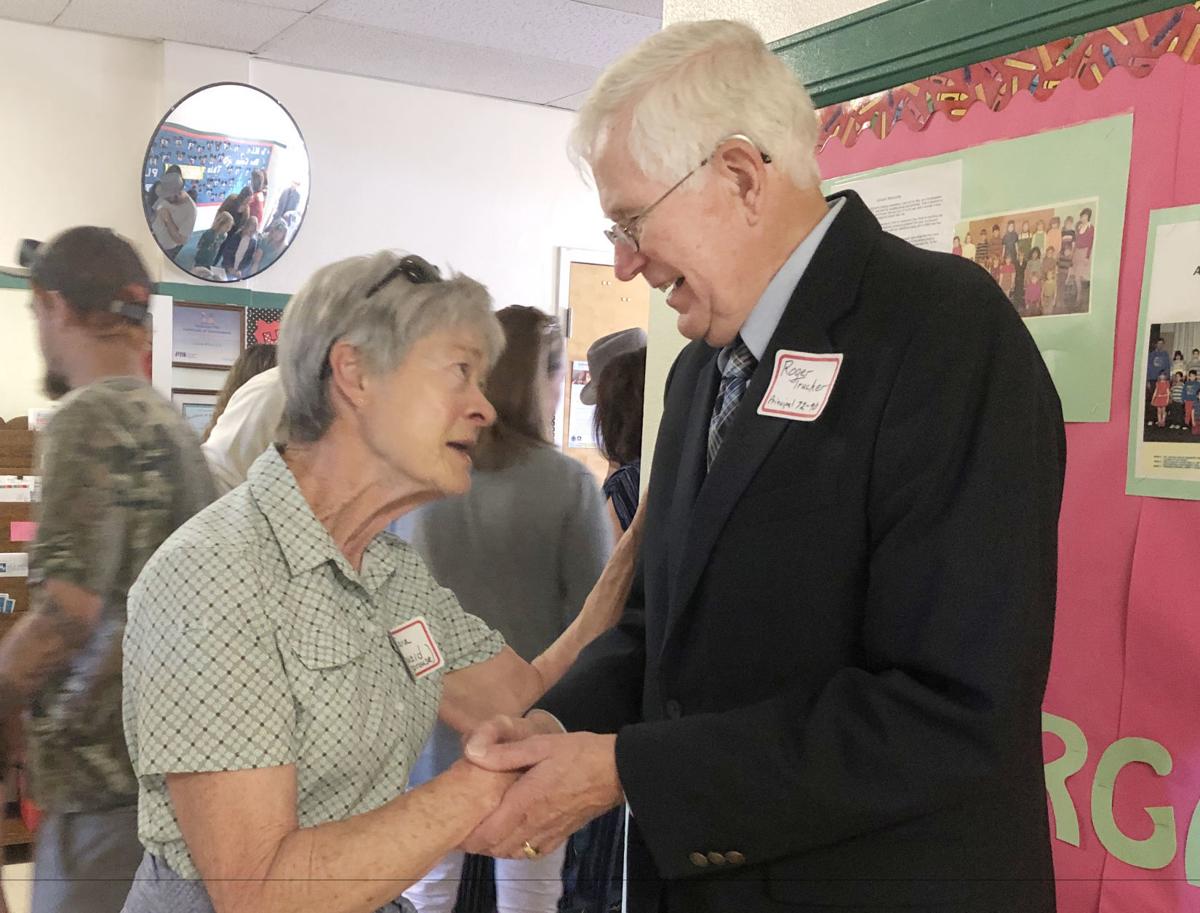 Former Lincoln Elementary School principals Roger Trucker and Kris Wollan greet each other Sunday during the farewell event for the school.

Roxy Romanelli looks through old photos to find a picture of herself from 1971 during the farewell event Sunday for Lincoln Elementary School.

Jeremy Gear, who attended Lincoln Elementary School between 1982 and 1987, holds up a yearbook photo of himself that he found Sunday at the farewell event for the school.

Bob Pelland, who attended Lincoln Elementary School between 1946 and 1950, looks at some of the historic documents that were on display Sunday during the farewell event for the school.

MOUNT VERNON — Bob Pelland can’t remember how many times he was yelled at for running up and down the stairs at Lincoln Elementary School when he was a student there between 1946 and 1950.

But on Sunday — nearly 70 years later — Pelland, now 82, made one last trip up and down those stairs. This time with no danger of getting into trouble.

“Surprisingly, the building is very much the same,” Pelland said.

Pelland was one of many who attended the farewell celebration Sunday for the school, which was built in 1936 and will close after this school year.

“Lincoln has been in the community for 80 years,” Superintendent Carl Bruner said. “And it’s been the epitome of a neighborhood school for many, many years.”

With the district nearing the end of the second phase of a $106 million, five-part construction project, Lincoln Elementary will close when Madison Elementary re-opens.

With the two new schools open, the district will no longer need to use the aging Lincoln, which has limited parking and smaller-than-average classrooms.

Despite its flaws, the building still holds a special place in the hearts of many who attended, worked, or volunteered at the school.

“These rooms were small — there was no storage — but I’m telling you, (it was) packed with learning and packed with a positive atmosphere,” said Kris Wollan, who served as the school’s principal from 1999 to 2013 and is now its human resources director.

Wollan and other former principals Roger Trucker — who served as principal from 1970-1990 — and Bill Nutting joined Principal Henk Kruithof at the event.

“Lincoln was my first principal position, and I learned so much from the staff that I have carried with me throughout my career,” said Nutting, who is now the district’s assistant superintendent. “I am forever grateful that the school and district provided me with that first opportunity.”

Many of those who attended the celebration had memories of Trucker. That group included Sara Sprouse Seward.

Sprouse Seward said not only did both her daughters attend Lincoln, they both broke bones there, as well. Trucker drove one of them to the hospital.

“She still remembers how kind he was,” Sprouse Seward said. “He was a great guy.”

Lopez Island High School Principal Dave Sather, who made sure to get a photo with Trucker — his former principal — said the school played a part in his decision to become a teacher.

“There was strong people here,” Sather said. “They looked after each kid.”

Mount Vernon School Board member Wendy Ragusa said she was proud her children were fourth-generation Lincoln Lynx and of the turnout the event garnered.

“It has been a pillar of the community,” Ragusa said. “This is witness for the love everyone had for this building.”

Like many, Ragusa said the closure of Lincoln Elementary is bittersweet. While it’s tough to say goodbye, it’s also an opportunity to say hello to new schools.

“It’s a whole new generation of learning and instruction,” she said.

For the event, school staff collected photos, news articles and yearbooks from as far back as possible. Attendees were invited to take home any keepsakes of theirs they could find.

“It’s been here forever,” Roxy Romanelli said of the school as she flipped through old yearbook photos from the 1970s. “It’s like a Mount Vernon icon.”

Geri Flint, whose four kids attended the school, said she and her husband, who live down the street, would miss Lincoln.

“We’ve been listening to kids play at this school for 42 years,” she said. “I am going to miss it. Having a neighborhood school is a really unique experience.”

Although it is not yet known what will happen to the building, the district does not intend to tear it down.