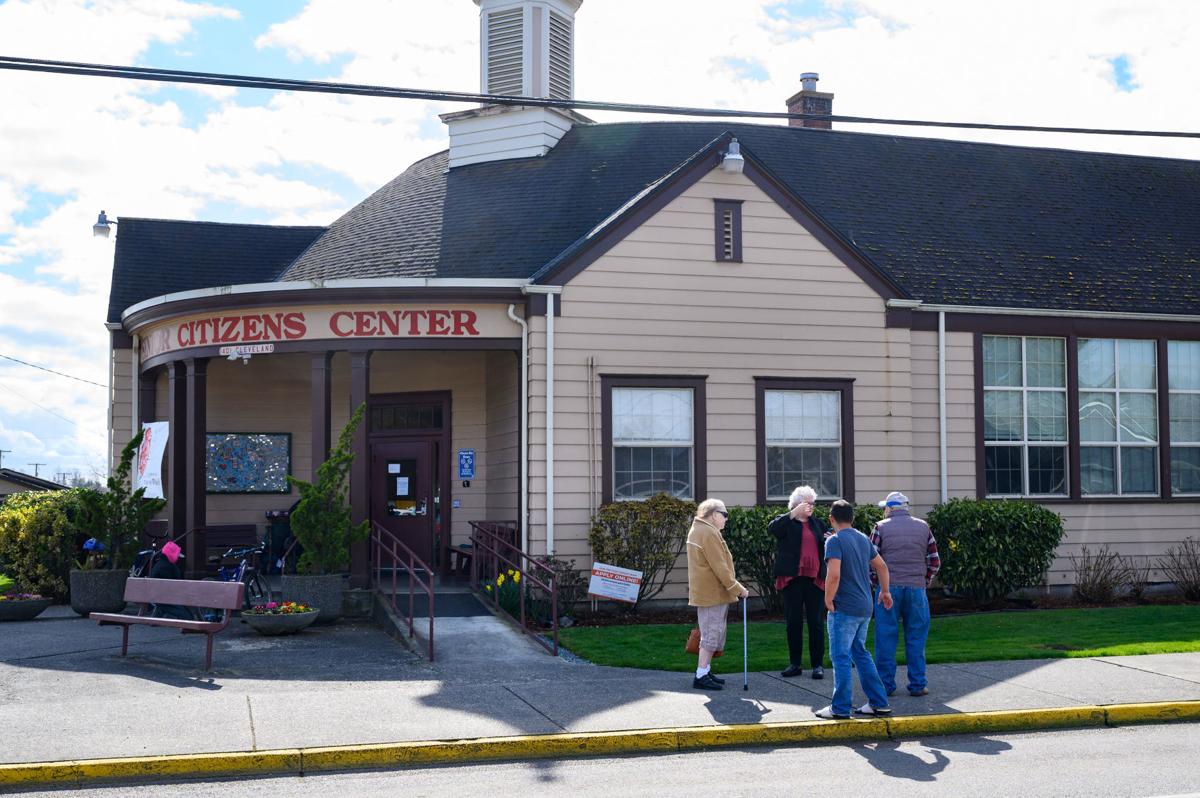 Seniors gather Thursday outside the Mount Vernon Senior Center, which is closed over concerns about COVID-19. 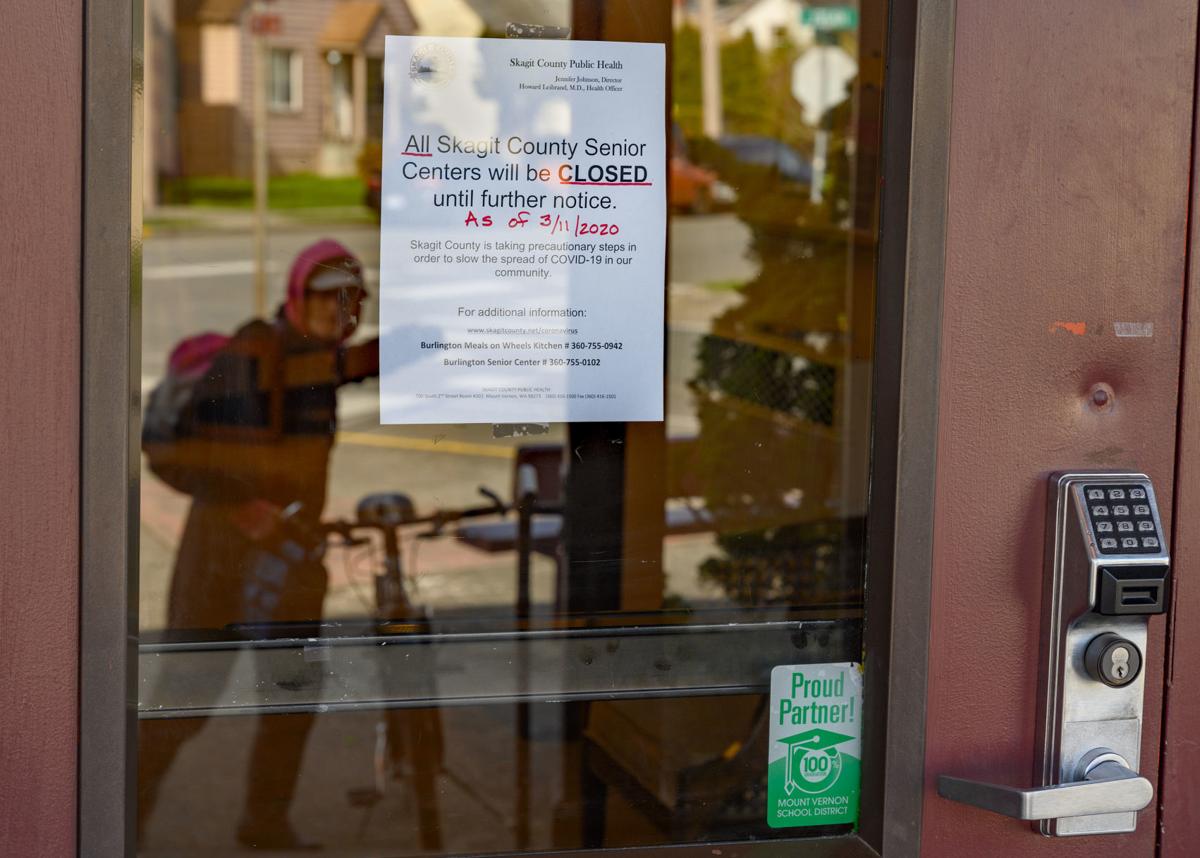 A homeless senior can be seen with her bicycle Thursday in the reflection of the front door of the now-closed Mount Vernon Senior Center.

Seniors gather Thursday outside the Mount Vernon Senior Center, which is closed over concerns about COVID-19.

A homeless senior can be seen with her bicycle Thursday in the reflection of the front door of the now-closed Mount Vernon Senior Center.

As the number of COVID-19 cases in Skagit County increase, leaders with county Public Health say they need the full support of residents to slow the spread of the disease.

While Public Health has identified only three positive cases of the disease among county residents, Public Health Officer Howard Leibrand said fighting the virus will require a buy-in from the entire community.

“This requires (widespread) participation and cooperation,” he said.

Leibrand issued a series of health recommendations Tuesday, asking people to postpone all nonessential gatherings of more than 10 people, encouraging businesses to allow employees to work from home and asking that residents who are over 60 or have underlying health conditions stay at home as much as possible.

“If someone goes against a recommendation, they’re putting themselves at risk,” he said.

Leibrand said there isn’t a specific number of cases that would prompt the county to put restrictions in place.

County public health staff are continuing to monitor the spread of the disease, are in constant contact with state and federal counterparts, and will make decisions as the situation develops, he said.

In the coming days and weeks, Leibrand said he’ll know his recommendations were effective if the number of reported cases, hospitalizations and deaths start to slow.

“If you see success in these things, there’s no need to go forward,” he said.

A health officer has limited authority over travel restrictions. Those decisions generally have to come from a state or federal entity.

If someone violates a health officer’s order, the county can take them to court, where the validity of the order would be argued, he said.

Leibrand said in an emergency he can act without approval from the county commissioners, but he said he believed it would be “irresponsible to do.”

County Commissioner Ken Dahlstedt said he and his colleagues are getting regular updates from Public Health, and are monitoring the virus’ spread closely.

“We’re trying to take every reasonable action we can,” he said. “We’re not going to do anything just to create fear.”

Commissioner Ron Wesen said in view of the many events that have been canceled in the community that the public is taking the health recommendations seriously, and restrictions wouldn’t be necessary if that continues.

Leibrand, who has served as county health officer for 31 years, said few emergencies have been as critical as this. The only two that compare, he said, are the 2009 swine flu outbreak and the ongoing opioid epidemic.

Like the novel coronavirus, the swine flu virus had no vaccine and was easily transmissible. Effective social distancing and good hygiene was effective against the swine flu, he said.

Effects of the opioid epidemic are felt widely through the community, but Leibrand said COVID-19’s potential for harm or death is even more widespread.

“This is going to affect 100 percent of the community,” he said.

Leibrand said he wasn’t certain whether taking action sooner would have been effective.

Though early research indicates the number of people infected with the novel coronavirus can double every four to six days, he said making a decision about social distancing before the public sees a need for it means it’s likely a recommendation that would be ignored.

“It would have helped to have recommendations sooner, but only if the people were ready for it,” he said.

While state law grants cities many of the same authorities that are given to counties, cities here are following Skagit County’s lead.

Burlington Mayor Steve Sexton said he plans to propose a resolution to keep paying the city’s bills and its employees’ wages in the event the City Council can’t authorize those payments. But other than that, he said the city is taking its cues from county Public Health.

“Our role now is to follow the county’s guidelines,” he said.

Peter Donovan, project development manager for Mount Vernon, said “the county is calling the shots for our area.”

Mount Vernon approved a proclamation of emergency Wednesday, but this action was proactive, he said.

On Saturday, Skagit County Public Health confirmed a fourth positive case of COVID-19, the illness caused by the novel coronavirus.

The man, in his 30s, was released from the hospital to home isolation.

Public Health believes community transmission of the illness is occurring in Skagit County.

The first three positive cases — of a woman in her 40s, a woman in her 30s and a man in his 20s — occurred earlier in the week. All are in isolation at home.

As of Saturday afternoon, there were 642 positive cases statewide. There have been 40 deaths.