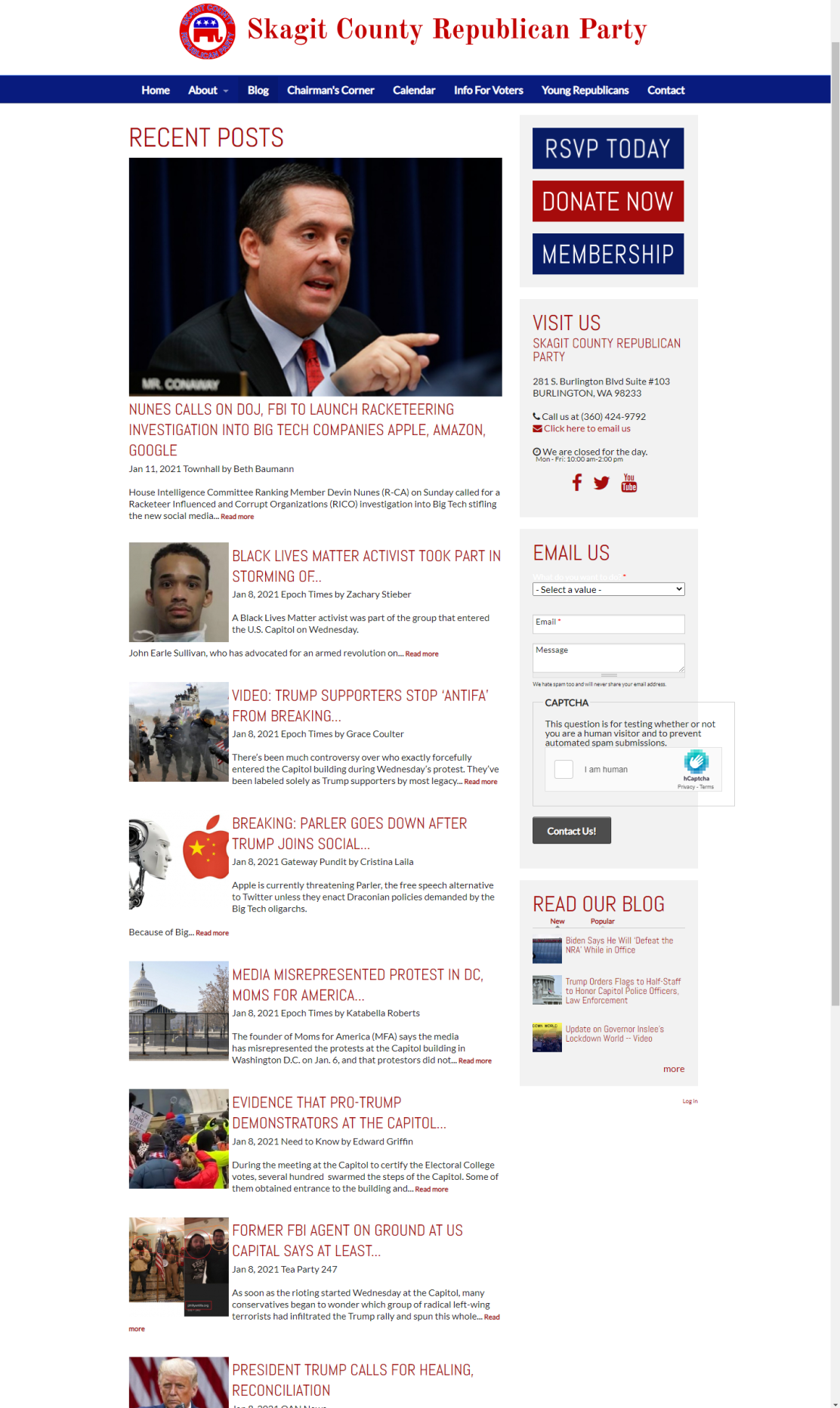 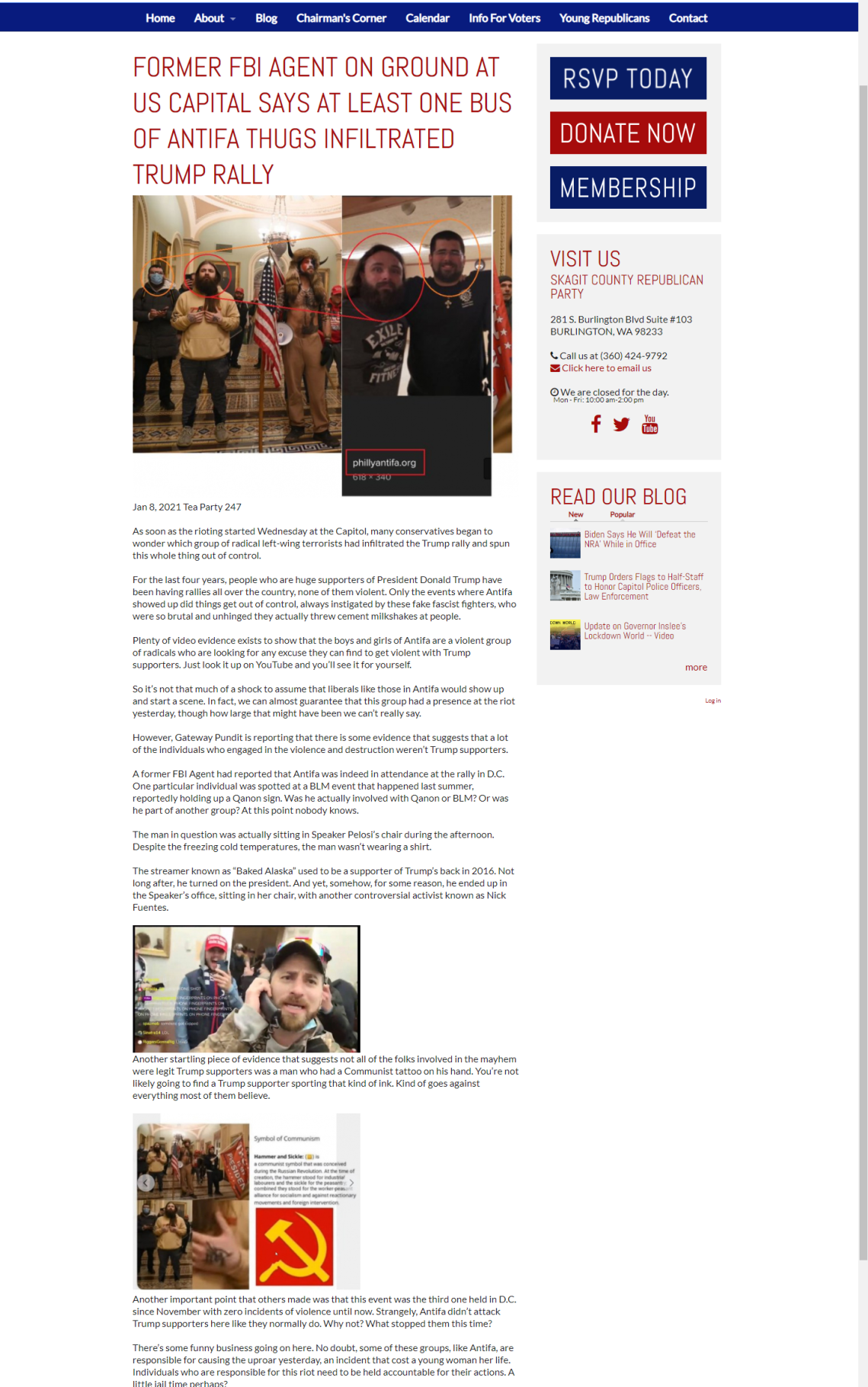 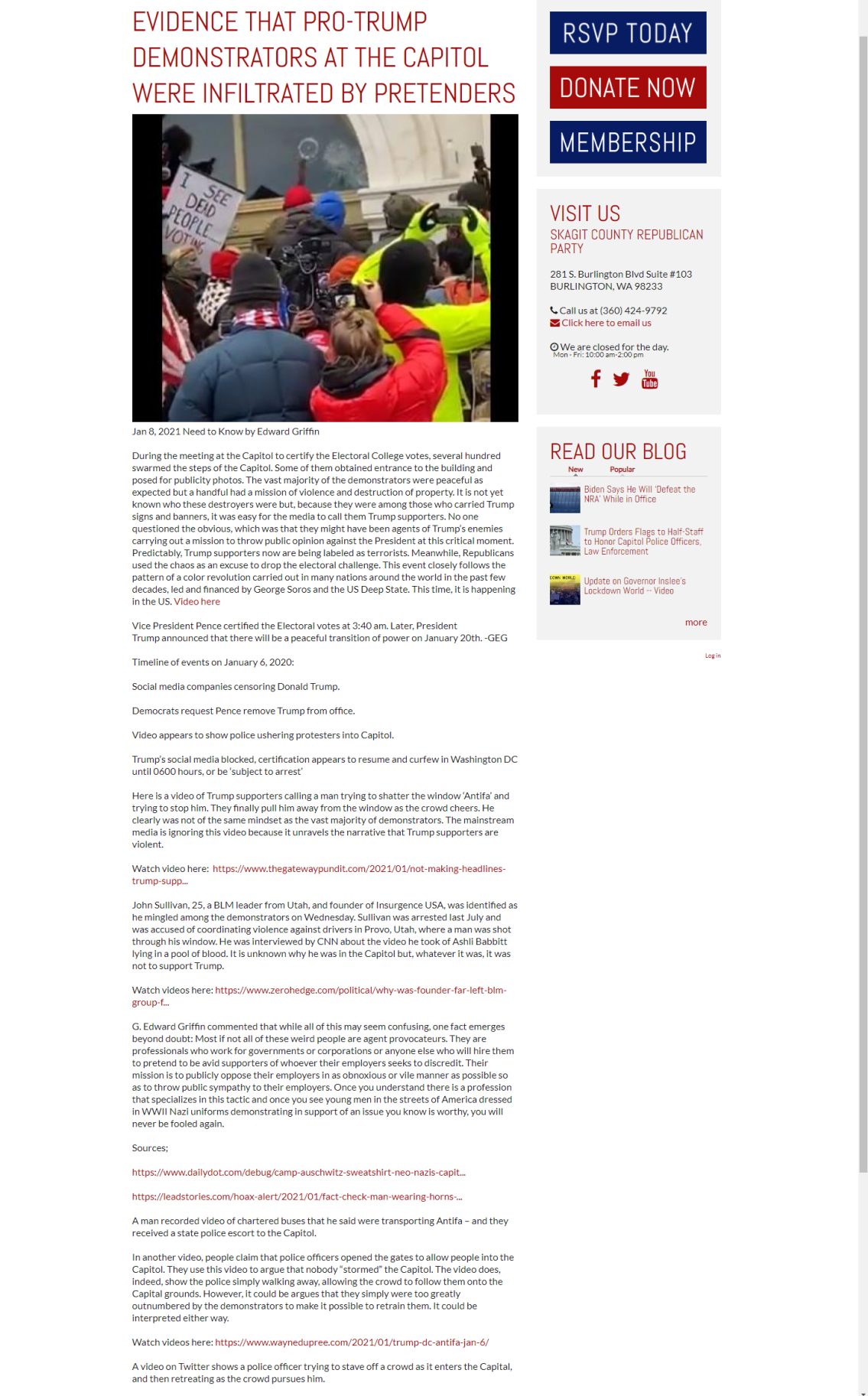 (Updates with editor's note at bottom)

In the wake of the insurrectionist riot Jan. 6 at the U.S. Capitol, the Skagit County Republican Party website and Facebook page have been posting articles from right-wing media sites that point fingers at the left.

Some of the posts, from sources such as Gateway Pundit, Town Hall, We the Governed and Tea Party 247, blame left-wing “pretenders” for the violence at the Capitol rather than supporters of President Donald Trump.

Despite FBI statements to the contrary, county party Chairman Bill Bruch said he believes Antifa (left-wing, anti-fascist) sympathizers masqueraded as Trump supporters in order to instigate violence to distract from the process of verifying the electoral college that would have dealt with what he believes was “massive, massive, massive voter fraud,” based on these articles and on information he heard from people at the president’s rally before the attack on the Capitol.

In a Jan. 8 news conference, Steven D’Antuono, assistant director in charge of the FBI’s Washington field office, said there was no indication that Antifa affiliates were involved, according to reporting from The Associated Press.

Bruch stood by the posts, most of which came from sites with a political focus rather than news coverage.

“Pretty much everything on the website is true,” he said in an interview Tuesday.

Of the more than 120 people facing criminal charges in connection to the storming of the Capitol, an AP investigation showed that many had posted to social media about the conspiracy that the election was stolen from Trump, and several threatened violence against officials not loyal to the president.

Every court attempt to overturn the 2020 presidential election has been thrown out for lack of evidence. But Bruch said he believes the FBI, judges, Justice Department officials and Republican elected officials who did not side with the Trump campaign have ulterior motives and can’t be trusted.

He said he believes violence still may have happened without the interference of 30 to 50 Antifa sympathizers, but said Trump supporters got swept up in the moment. He said he doesn’t know exactly what happened and will likely know more in the coming months.

Bruch said he trusts the providers of the information outside of mainstream media because he believes those providers present a message that the majority of Republicans believe. He said he would consider changing his mind on these issues if a majority of the 74.2 million people who voted for Trump changed their minds, as well.

Prominent Republican elected officials from the county declined to condemn or endorse the posts.

State Sen. Keith Wagoner, R-Sedro-Woolley, said Republicans in his district, the 39th Legislative District, have a variety of opinions on this, and he didn’t want to perpetuate an intra-party fight.

He declined to say whether he believed the 2020 election was legitimate or if he believed Antifa sympathizers sparked the violence at the Capitol.

“I would leave the door open to people who believe either way,” he said.

However, he said he had “no reason to doubt” statements from the FBI that there is no evidence of an Antifa presence.

County Commissioner Ron Wesen strongly condemned the violence and destruction of federal property, but said he did not know who exactly was responsible. He said he supported the right to ask questions about who is responsible, saying the freedom to do so is an American principle.

“A lot of this will be clearer as time goes on,” he added.

Wesen said he acknowledges the validity of Joe Biden’s upcoming presidency, but said there is a possibility it was acquired through fraud. (* See Editor's note below)

Bruch said he is disappointed in mainstream media organizations and Fox News for not defending Trump supporters in the wake of the violence at the Capitol and said he and other conservatives have had to go to these alternative outlets to find posts that they agree with.

The national and state GOP websites are not as far-reaching in their recent posts, and both offered statements of disapproval for what occurred at the Capitol without accusing anyone but Trump supporters of participation.

The national GOP site offered a statement on its homepage that condemned the violence and stated: “Our Founding Fathers established a nation of laws, not a nation of anarchy.”

The state GOP site had no reference to the Capitol mob on its homepage, but a one-paragraph statement from the state chairman on its news page stated: “Today’s events are unfathomable. I never thought I would see something like this in the greatest country in the history of the world. Violence, intimidation, and disruption of the business of the People’s House is wholly unacceptable, and it flies in the face of our nation’s foundational values.”

Bruch said he and the county GOP website administrators make the editorial decisions on which articles to post and are avoiding sources they feel are too right-wing.

“I’ve spoken with people who actually believe Trump is still going to be president after Jan. 20,” he said. “Maybe they just need hope right now.”

He said he hopes once Trump leaves office, people will be able to focus on election security issues.

* Editor's note:  A news release sent from the county commissioners' office Wednesday afternoon contended this story "misconstrued" Wesen's statements. However, he did not say what was in error, and while he spoke with the reporter before sending the news release, it was unclear what he believed was wrong. He did not return a phone message or email from the editor for clarification, and his comments in the press release do not represent a change in position from what was reported. The Skagit Valley Herald stands by its reporting of the initial interview with Wesen. But we offer these additional comments from Wesen here because the release said he felt compelled to make them:

"I condemn in the strongest terms the violence that took place in Washington, D.C. last week. The insurrection was shocking to witness. I also want to make clear that President-Elect Biden was elected in a free election. I look forward to President-Elect Biden’s inauguration next week."

Bill Bruch had this to say in his May 20, 2020 Republican Party newsletter.

“Evidence is showing that Covid-19... is a huge fraud perpetuated on mankind.”

“Reliable data shows that Covid-19 is much less severe than anticipated and behaves like a influenza type virus.”

“More evidence is showing that without a doubt Anthony Fauci is behind the Covid-19 pandemic.”

Now, in 2021, nearly 23 million Americans have been infected and, sadly, almost 400,000 have perished. 80% - 85% of the fatalities are people 65 and older. It would not surprise me if senior Republicans gave Bruch the boot as punishment for his refusal to accept facts, and his apparent disdain for we old timers.

This is really quite disappointing to find here in the county in which we live.

It's a shame that Mr. Wesen and Mr. Bruch, leaders and representatives of what used to be a legitimate political party, have bought into the inflammatory misinformation which characterizes the current GOP. A healthy 2 party system is important to sustain our system. Skagit County deserves better.

I'm glad you brought up the term "leader". It's not enough to simply be representatives of the people in their district. They have an obligation to provide leadership. By the time the last frivolous lawsuit has been dismissed, leaders should tell their constituents that justice has been done, else risk being held responsible for what happens next. Continuing on is either pandering to power from above or to the lowest, poorly informed elements.