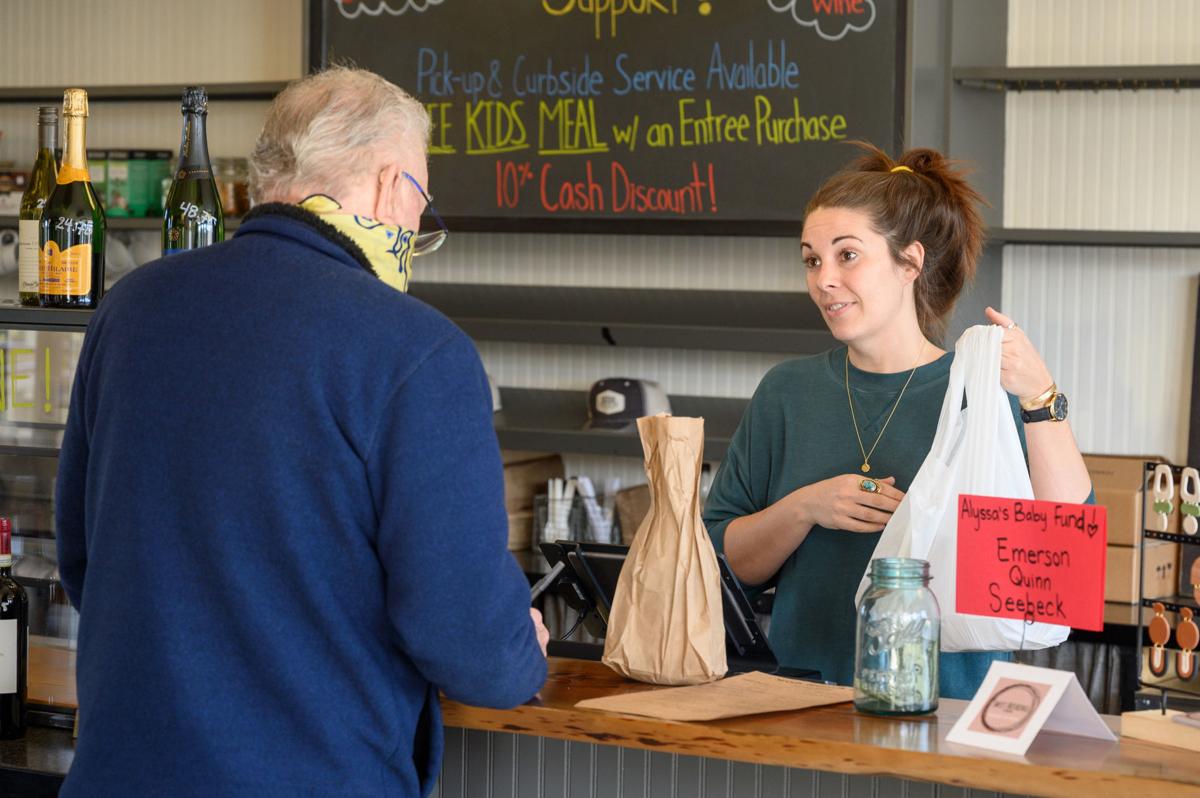 Seeds Bistro & Bar owner Kjendal Hicks chats with a masked customer Thursday as he picks up an order made by phone at the La Conner restaurant. 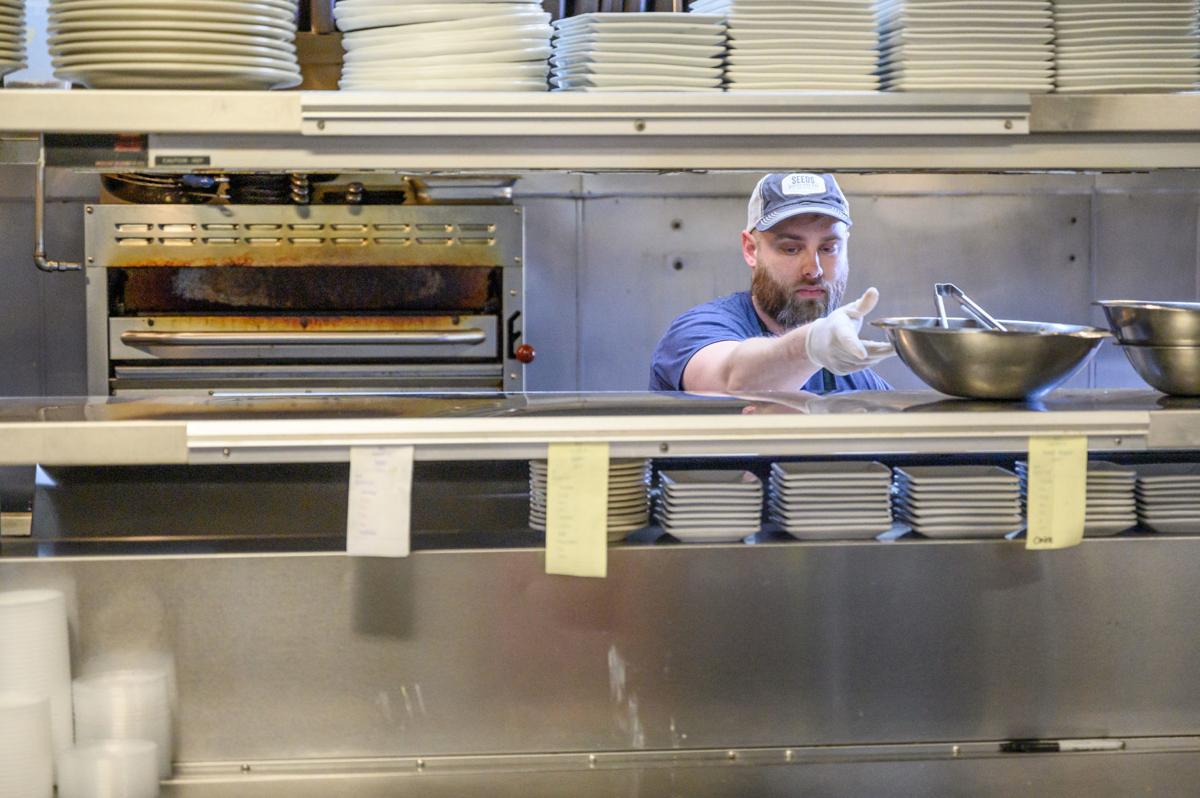 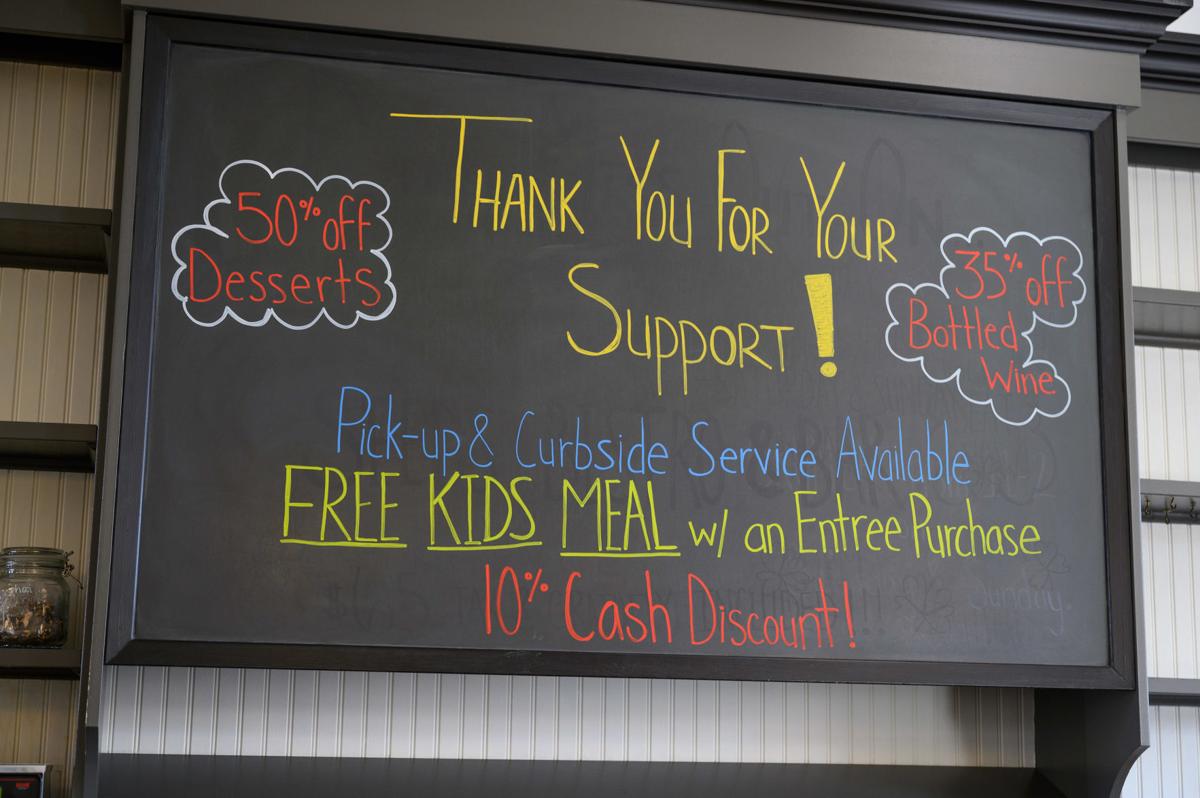 A sign at Seeds Bistro & Bar says it all Thursday. 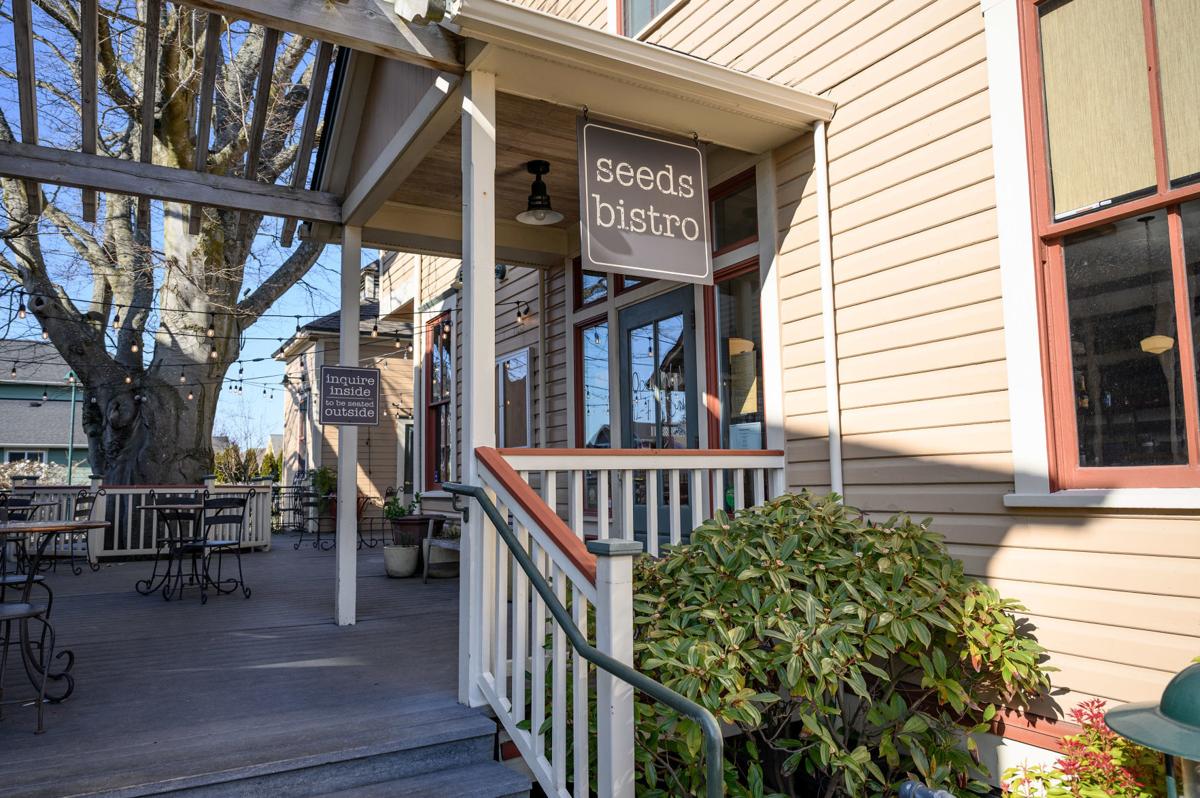 Seeds Bistro & Bar is a popular La Conner restaurant that has been forced to change its business model in the face of the COVID-19 pandemic. 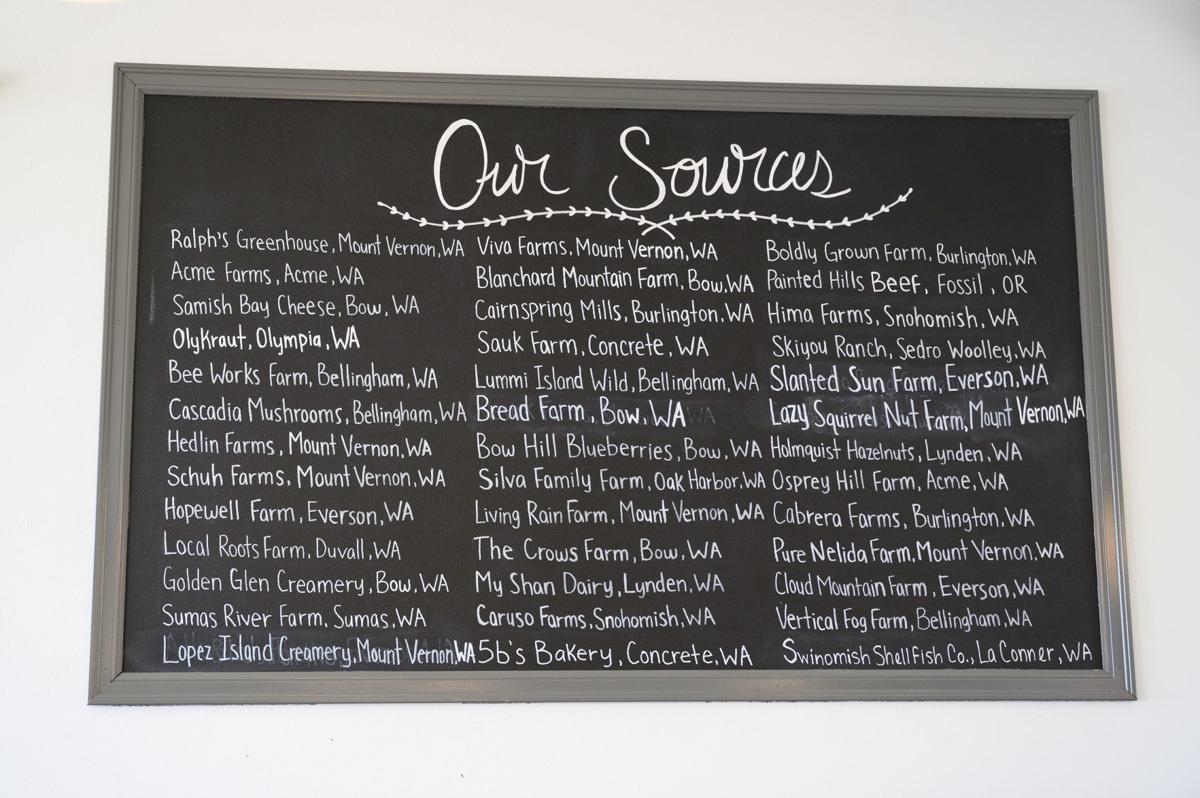 Seeds Bistro & Bar owner Kjendal Hicks chats with a masked customer Thursday as he picks up an order made by phone at the La Conner restaurant.

A sign at Seeds Bistro & Bar says it all Thursday.

Seeds Bistro & Bar is a popular La Conner restaurant that has been forced to change its business model in the face of the COVID-19 pandemic.

As a farm-to-table restaurant, Seeds Bistro & Bar in La Conner usually features lots of seasonal dishes and fresh produce on its menu.

Nowadays when regulars call to order their favorite menu items — crab cakes, wild boar meatloaf, house-made pasta, salad with seasonal vegetables — owner Kjendal Hicks said she has to tell them those dishes are no longer available.

Instead, the restaurant is offering macaroni and cheese, sandwiches, fish and chips, burgers, soups, a wedge salad — a take-out friendly menu with reduced prices.

These are the kinds of changes some restaurants have had to make to survive, after Gov. Jay Inslee banned in-person dining nearly a month ago to curb the spread of COVID-19. Restaurants, considered an essential business, are allowed only to offer meals for take-out or delivery.

While Seeds Bistro & Bar is still buying from local vendors, it is focused on using up inventory in its freezer rather than buying fresh produce and letting unused products go to waste, said Hicks, who has owned the restaurant since 2018.

“We’ve had a couple of really great days, and we’ve had days we don’t understand why we’re even open,” she said.

Hicks said she has kept the restaurant open so employees could continue to work, if they feel safe doing so, and to support the community.

She said the restaurant encourages phone transactions to avoid taking credit cards in-person, and disinfects pens after each use.

Hicks said it becomes harder and harder every day to stay open.

“I’m getting out of bed and coming here, I’m here every day, and I’m going under,” she said. “I’m not taking money home right now, and I’m just here trying to see if I can make it through.”

She said while short-term relief for rent payments and utilities will help, those bills will be waiting for her later.

“(I’m worried about) the amount of debt I am racking up, so I have to be really careful about the labor I am using right now,” she said.

Hicks said her staff has shrunk from 16 — including four employees who had been recently hired to work at the restaurant during the Skagit Valley Tulip Festival — to just three.

For many Skagit County businesses, losing March and April is a huge hit.

“I’ve already lost what would have carried me through this year, and it’s hard to imagine I’m going to come back from that,” Hicks said.

One Skagit County restaurant was open for 24 hours before it had to shut down.

On March 14, District Brewing in Mount Vernon hosted its first customers, after finishing an 18-month renovation of a historic theater on the riverfront.

The next night, on March 15, the brewery learned it would have to close.

He said the brewery is doing take-out and delivery, trying take-and-bake pizzas, and is partnering with Whatcom Educational Credit Union to offer a free pizza or salad to first responders.

"I think the trick for all us businesses is hang on by our toenails for two or three months," he said.

Other restaurants tried take-out for a few weeks and now have temporarily closed.

Anacortes Mayor Laurie Gere, who owns Gere-a-Deli in Anacortes, said losing dining room service and event catering left the restaurant with a sliver of its normal business. The business decided to close in late March over health concerns.

“We just thought we need to take care of employees, keep them healthy and let them be with their families,” Gere said. “It was a really tough choice.”

She said she has seen other Anacortes restaurants make adjustments, such as requiring customers order meals by early afternoon, so staff only preps what is needed.

She said Gere-a-Deli plans to reopen when it’s safe to do so.

“We hope by later summer we’ll be back to whatever the new normal is,” she said. “I’m not afraid long-term, but more about the short-term transition piece.”

Business loans and grants are available to help those hurt financially by the COVID-19 pandemic. But it hasn’t been easy for many to secure funds, and the system has been strained by a nationwide surge in applications.

Hicks said she applied for “everything under the sun” and got her applications in early, anticipating the system would be inundated.

Then, she learned she might have to re-apply for an Economic Injury Disaster Loan because the U.S. Small Business Administration’s (SBA) website had crashed.

Cindy Brooks, certified business adviser at the Small Business Development Center and Economic Development Alliance of Skagit County (EDASC) in Mount Vernon, said the SBA is now on the third version of the loan application.

She said the agency has advised businesses that applied for the loan before March 30 that they must now re-apply. Applicants may be eligible for an up to a $10,000 emergency grant, funded through the CARES Act, the federal relief package passed in late March.

Brooks said the grant amount will depend on a business’ number of employees. Businesses can receive $1,000 per employee up to a maximum of $10,000.

The SBA’s website states that businesses may get OK'd for an emergency grant days after successfully applying. However, it’s unclear when they will get the money in their hands.

“That is huge,” Hicks said. “Every day I stay in business, I have excise tax, payroll tax, all of these things that are adding up I don’t have money for right now.”

She has also applied for a new loan program, the Payment Protection Program (PPP), which is intended to incentivize businesses to retain and rehire employees.

Businesses can use loans to cover payroll, rent, mortgage and utility payments, over any eight-week period from Feb. 15 through June 30. At least 75% of the loans must go toward paying employees.

The loans will be fully forgiven if businesses keep employees on the payroll for the eight weeks, and maintain their salaries and wages, according to a fact sheet from the U.S. Department of the Treasury.

For businesses that have reduced their staff, they have "until June 30, 2020 to restore full-time employment and salary levels for any changes made between February 15, 2020 and April 26, 2020" for the loan to be forgiven, the fact sheet states.

It may be challenging for some businesses to meet the requirements.

“If your business is closed or is functioning at a reduced capacity, creating the revenue to pay employees for eight weeks could be difficult,” Brooks wrote in an email.

Hicks said she is unsure when she’ll be able to hire back her full staff.

“That is one of my fears, is that if I take (the loan), it will put me more into debt if I can’t satisfy the requirements they have,” she said.

She said few employees are interested in returning to work at this time, choosing to prioritize their health.

Brooks said she recommends businesses apply, or re-apply, for the Economic Injury Disaster Loan right away. For the PPP loan, businesses should inquire with their bank to see if the bank is an SBA-approved lender, and to get help with the application process.

EDASC CEO John Sternlicht wrote in an email update Friday that some businesses are hearing that banks have reached their lending limits and are no longer accepting applications. He said businesses should keep checking in with their banks to see if limits have been lifted, and that there may be non-bank platforms who are approved lenders, as well.

EDASC is keeping an ongoing list of financial resources for businesses and workers at skagit.org.

Elise Knutson, who opened The Porterhouse Pub in downtown Mount Vernon 15 years ago, said other hardships — such as the Great Recession of 2008 and the Interstate-5 bridge collapse of 2013 — left room to adjust.

“This now is just an absolute standstill,” she said. “There’s nothing coming in. It’s a different ball game.”

Knutson decided to temporarily close the restaurant the day after the in-person dining ban was announced in March. She worried about employees’ health, and felt it was the right business decision.

She worries most about supporting herself and her daughter, but also about her building’s landlords who had hoped to retire soon, the restaurant’s employees, and the food and beer distributors who supply the restaurant.

“We are a social business, we feed off each other as a crew, and our patrons, we are extremely close to all of them, and that is gone, social interactions are gone,” she said.

Knutson said in addition to being gathering places, restaurants are the second largest provider of jobs in the private sector nationwide, and big contributors to local organizations and charities.

The National Restaurant Association estimates the industry will lose $225 billion during the next three months, leading to the loss of five to seven million jobs.

In Skagit County, restaurants employed about 4,100 and paid about $22.3 million in wages in the second quarter of 2019, according to data from the state Economic Security Department.

Knutson said for restaurants to survive, they will need financial assistance that is easy to access.

And when it’s safe to do so again, Knutson said she believes people will come back to restaurants.

“I think they’re not only going to want to, but need to,” she said. “We need each other as humans … I am looking forward to the day when I can look at my regulars’ faces and pour them a beer.”

When ordering take-out, place orders online or by phone, if possible. Ask for no-contact deliveries, such as for delivery person to leave food in a safe spot outside house. Otherwise, maintain at least six feet of distance during delivery.

The CDC states that there is no evidence to support transmission of coronavirus through food.

With the COVID-19 pandemic affecting restaurant services, Mount Vernon has compiled an interactive map of establishments that are still serving food.

The project provides a centralized source of information on restaurants in or near city limits, while helping the public continue to support local businesses, according to a news release from the city.

The map is available at mountvernonwa.gov/CivicAlerts.aspx?AID=367