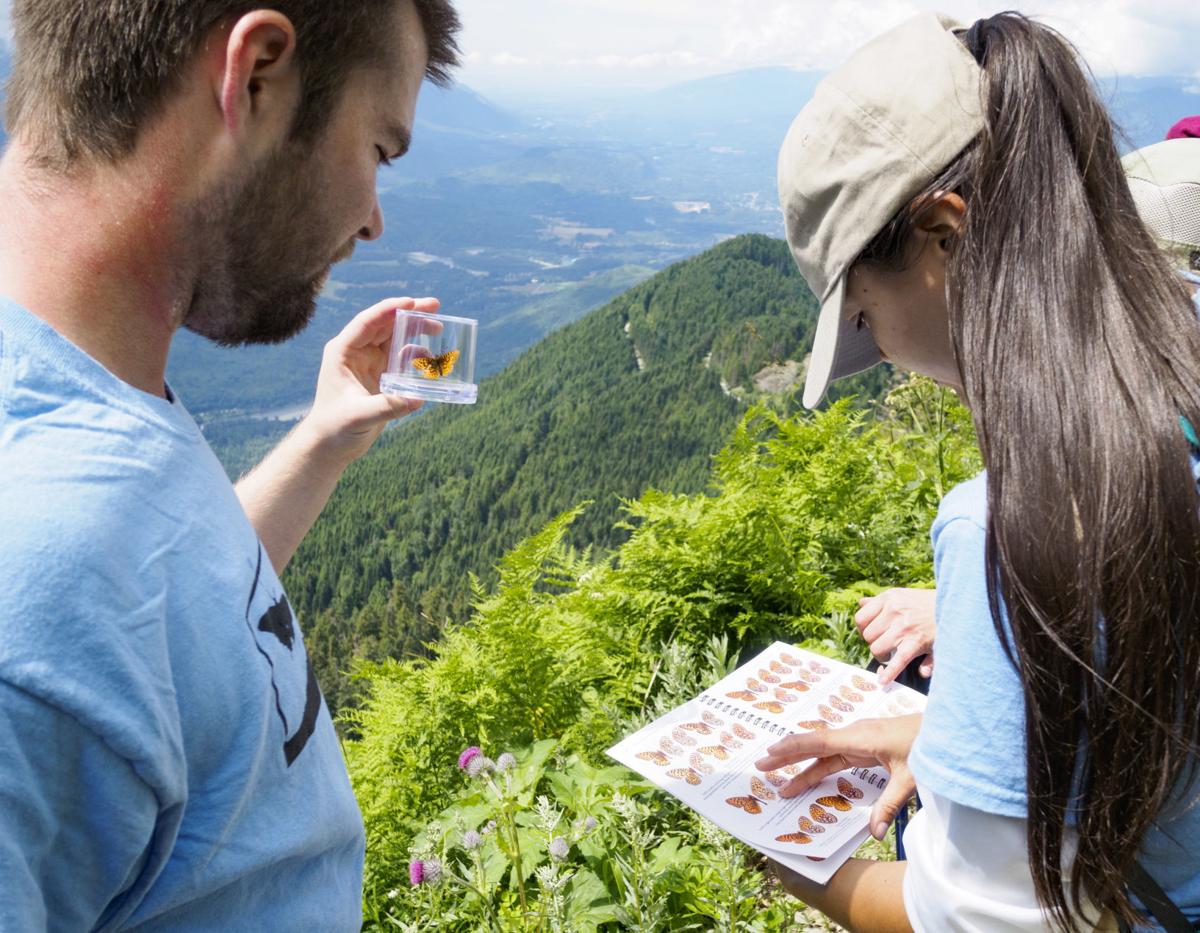 Student researchers Charlie Carmichael, left, and Nicole Sieger check a specimen against a reference booklet July 16 during a butterfly survey on Sauk Mountain. 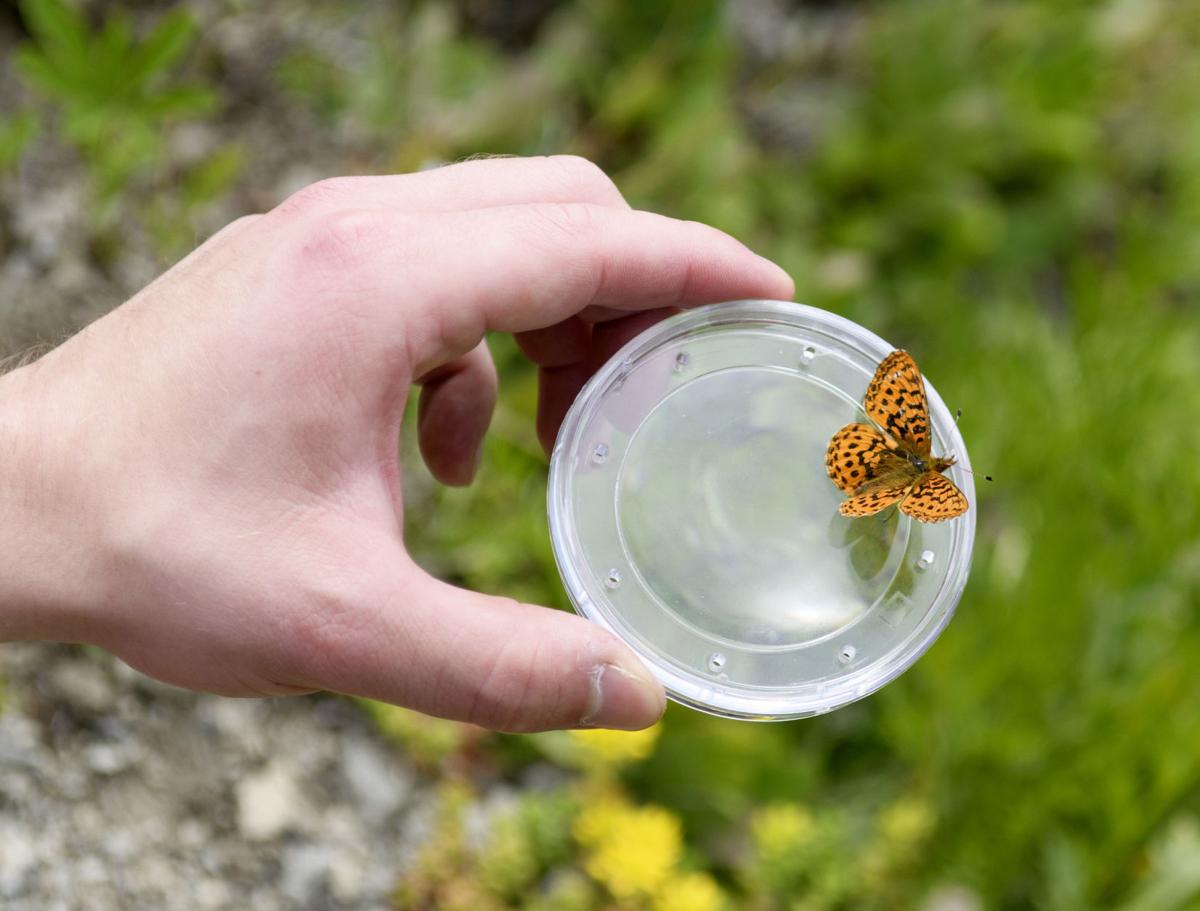 A fritillary butterfly is released after being classified and counted July 16 during a butterfly survey on Sauk Mountain. 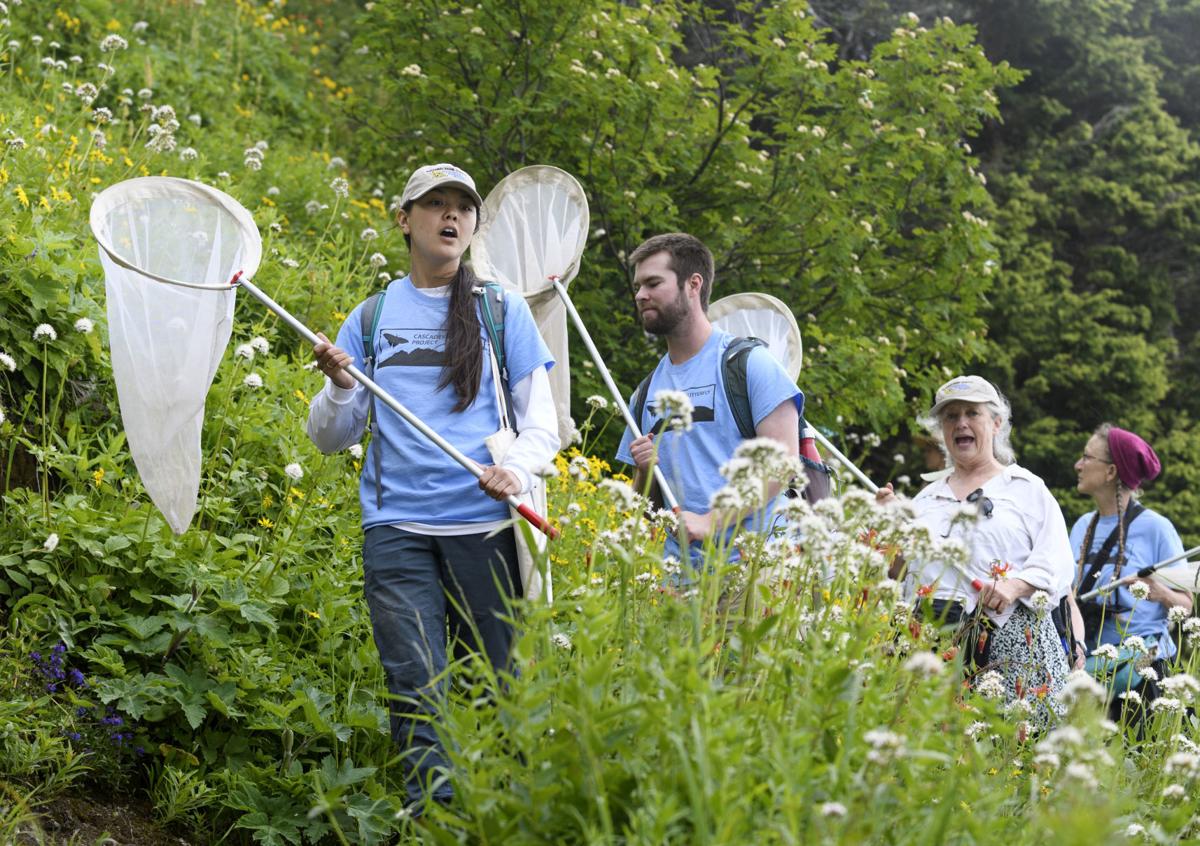 While leading the way on a butterfly survey July 16, volunteer Nicole Sieger, left, and Monique Brewer, in white, simultaneously spot a speciment. 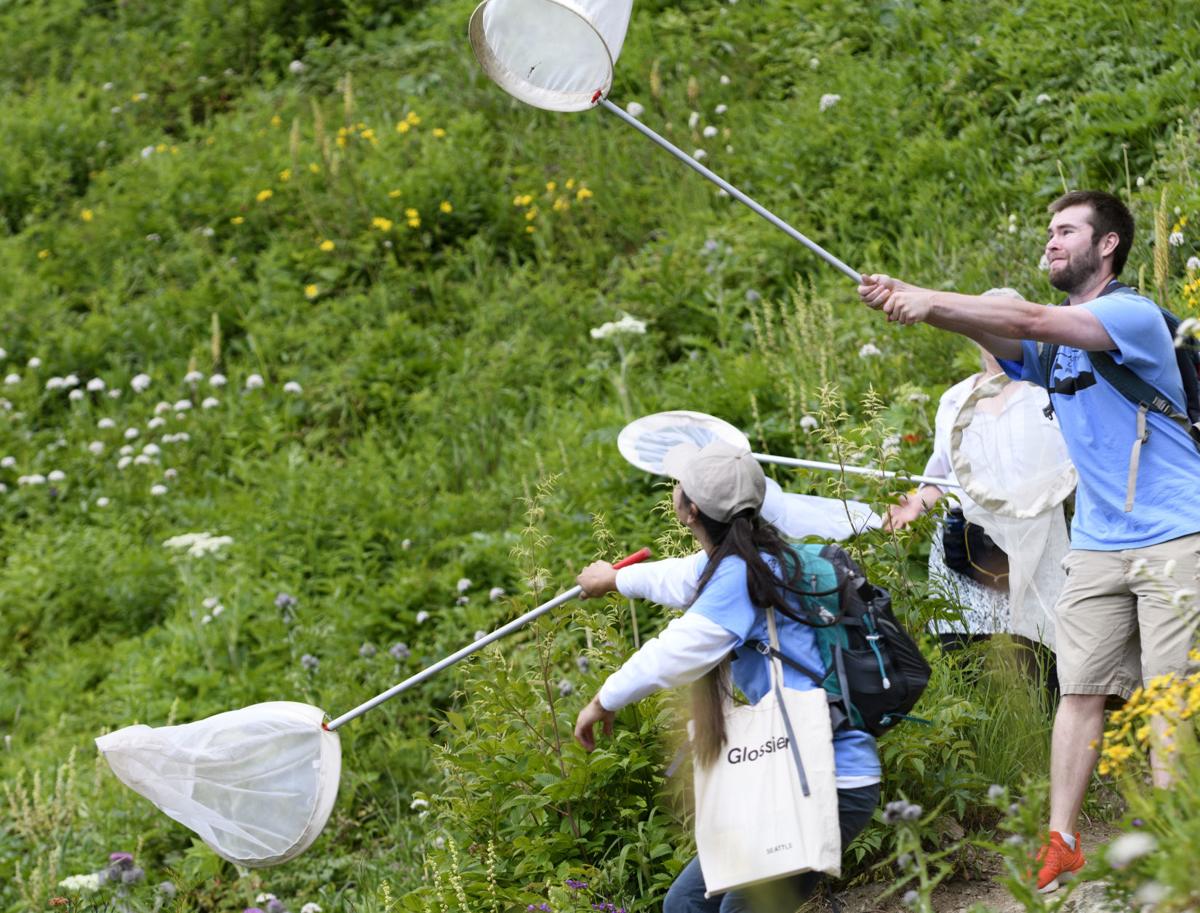 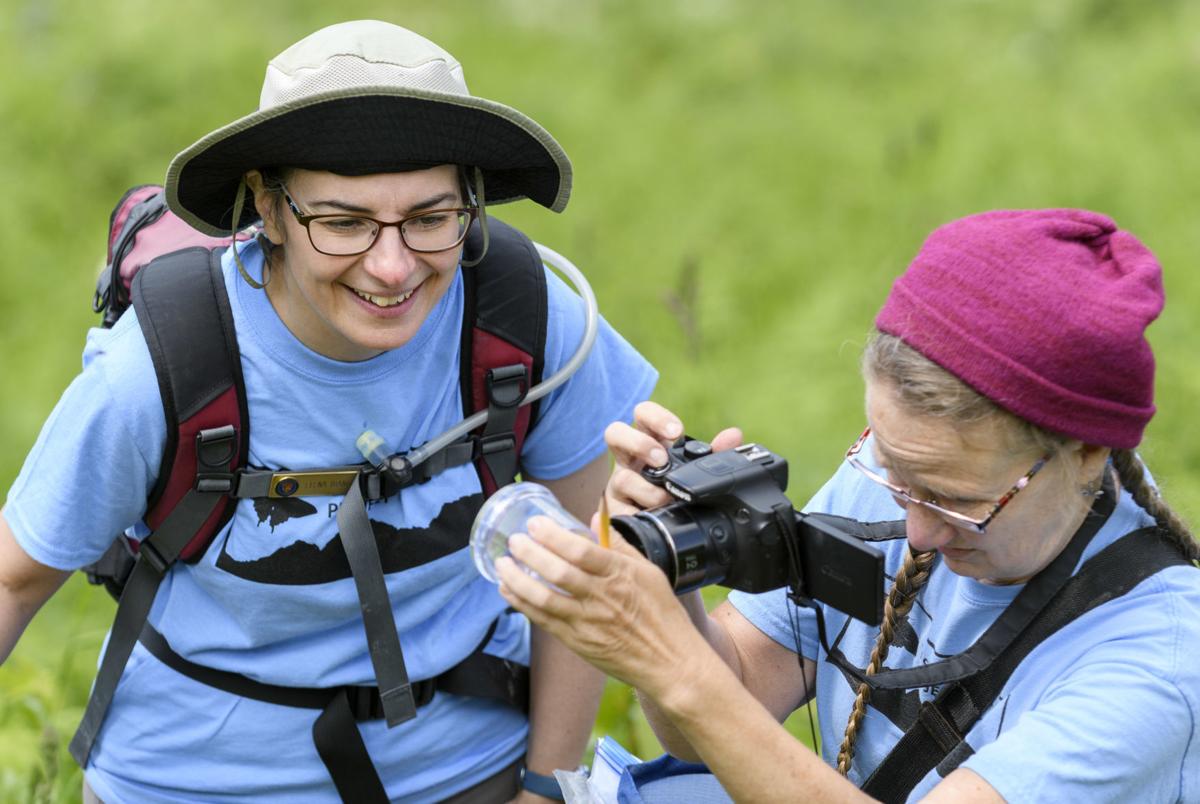 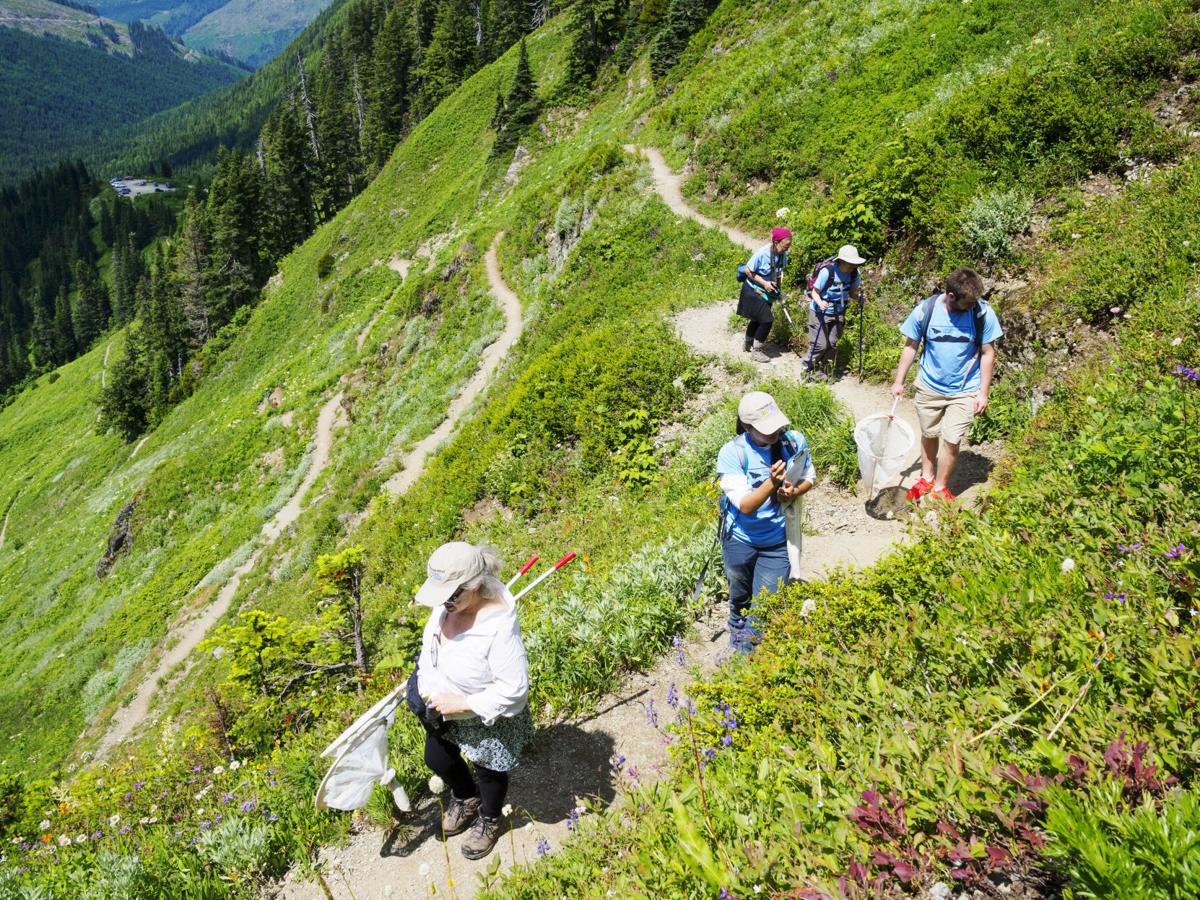 The research team makes its way July 16 up the switchbacks on Sauk Mountain during a butterfly survey. 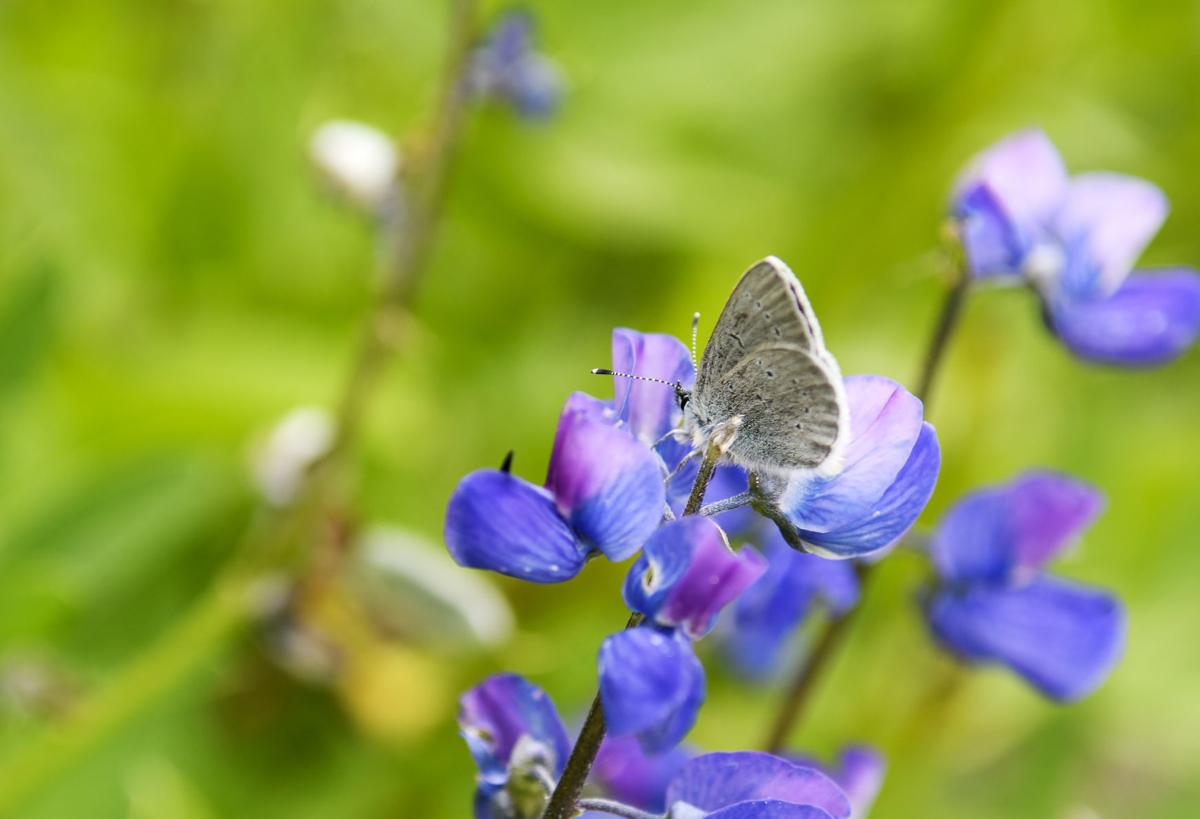 A butterfly rests on a flower July 16 on Sauk Mountain. 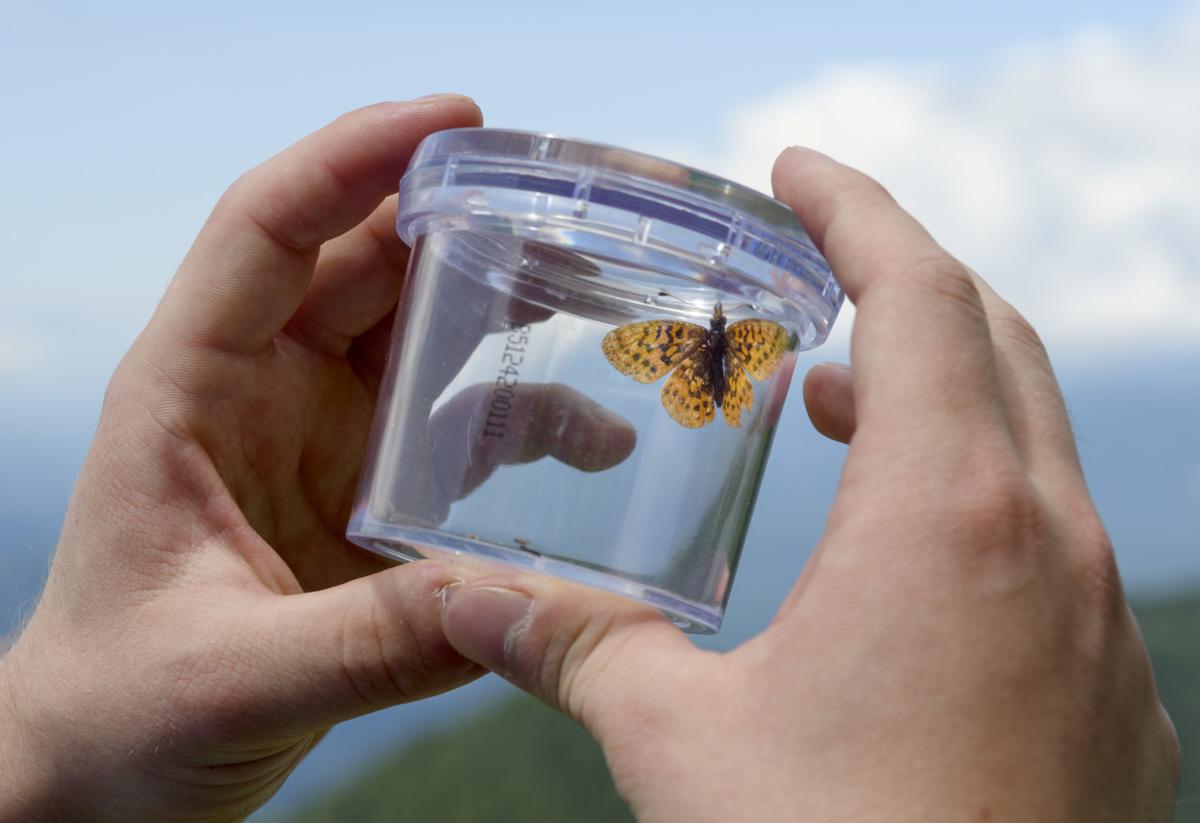 Charlie Carmichael notes missing bits on a butterfly's wings, likely made by a bird's beak. 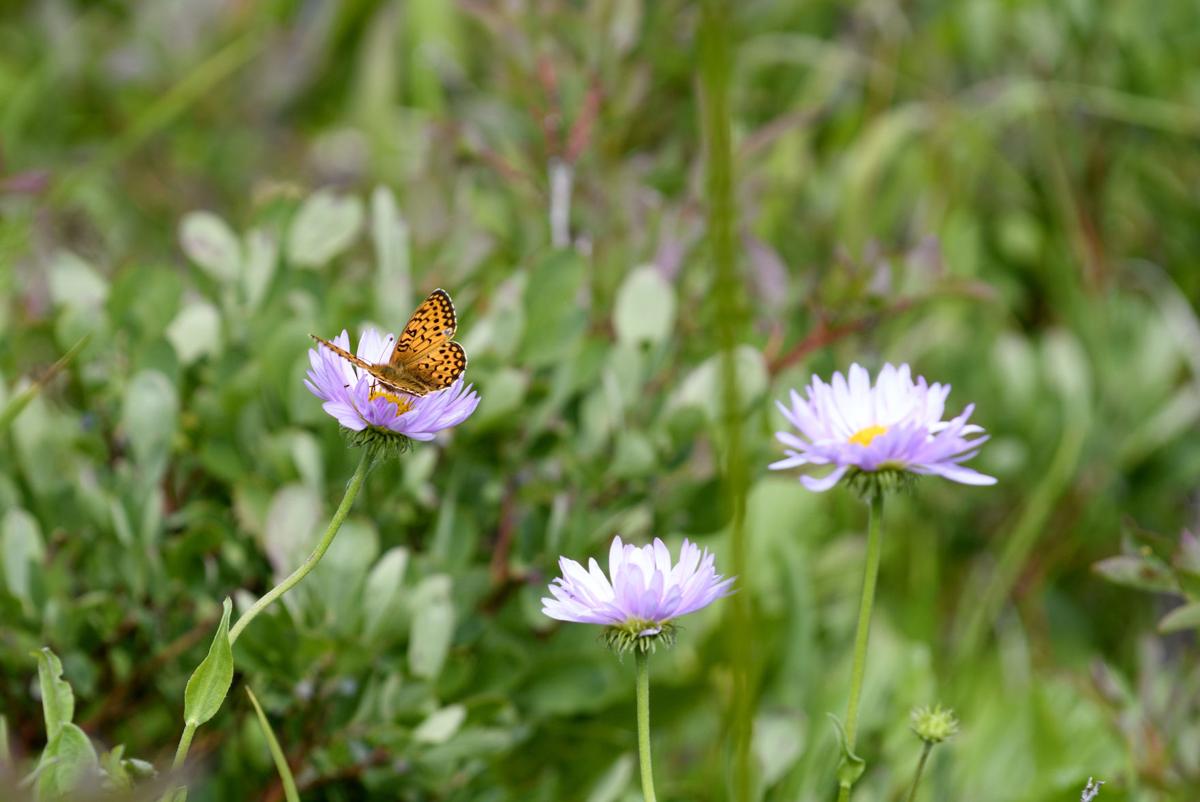 A fritillary butterfly rests on a flower July 16 on Sauk Mountain. 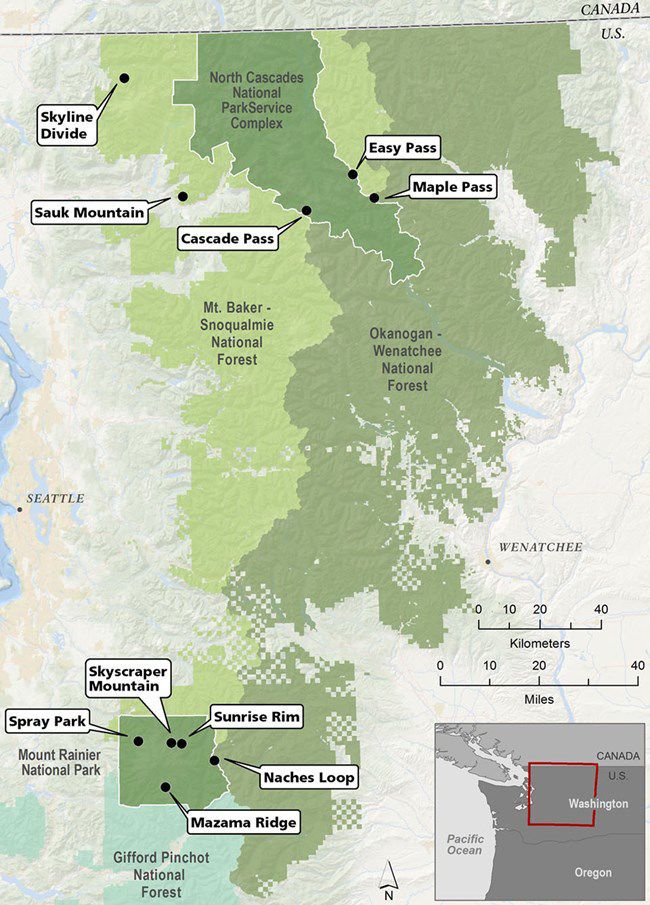 Student researchers Charlie Carmichael, left, and Nicole Sieger check a specimen against a reference booklet July 16 during a butterfly survey on Sauk Mountain.

A fritillary butterfly is released after being classified and counted July 16 during a butterfly survey on Sauk Mountain.

While leading the way on a butterfly survey July 16, volunteer Nicole Sieger, left, and Monique Brewer, in white, simultaneously spot a speciment.

The research team makes its way July 16 up the switchbacks on Sauk Mountain during a butterfly survey.

A butterfly rests on a flower July 16 on Sauk Mountain.

Charlie Carmichael notes missing bits on a butterfly's wings, likely made by a bird's beak.

A fritillary butterfly rests on a flower July 16 on Sauk Mountain.

SAUK MOUNTAIN — Butterflies of orange, white and blue that hovered above the wildflowers on Sauk Mountain last week caught the eyes of hikers on the trail to the mountain’s peak.

A group of five members of the Cascades Butterfly Project, with long white nets at the ready and the occasional call of “Butterfly!,” also drew the attention of passersby.

“Happy hunting,” one hiker said while passing the group.

The volunteers with the Cascades Butterfly Project are involved with research that aims to study how butterfly species and their numbers in the alpine meadows of the Cascade Range change as the global climate warms.

“They are sensitive to changes in temperature and precipitation ... and they can provide a window into understanding the effects of climate on high-elevation areas ... adapted to cool, short summers,” project leader Regina Rochefort said.

Studies in Europe and California have documented butterflies shifting their range north or to higher elevations in response to changing temperatures. The goal of the Cascades Butterfly Project is to note any similar changes here.

As volunteers made their way along the trail last week, they watched carefully for butterflies in flight or perched on trailside plants. They documented any butterflies they were fast enough to either catch or photograph.

Because there are several varieties of fritillary — including Mormon and western meadow — determining the exact species takes a close look.

“Sometimes it can be subtle differences,” Elena Bianco said. “Even just a smudge of color.”

Some butterflies can also be identified by their color and the way they fly, which is called their flight pattern.

Each new find is exciting.

Clark said she was the first project member to find a white mountain Parnassian butterfly on Sauk Mountain.

“We knew they were up here, and I documented it on film, so that was pretty exciting,” she said.

The group on Sauk Mountain on July 16 also found one of the white mountain Parnassian butterflies, which have distinctive red spots and other black markings on their white bodies.

They also documented for the first time a mourning cloak, a dark-bodied butterfly with light yellow edges and blue spots.

The Cascades Butterfly Project began in 2011 under the leadership of Rochefort, then a region science adviser for the National Parks Service, and involves documenting butterflies and the flowers they use for food and for nurseries for their young.

“We monitor plants also because plants and butterflies depend on one another and one question is: Will they respond at the same rate, or will one be more sensitive than the other to warming climates?” Rochefort said.

While that question has yet to be answered, she said the project is already showing blooms and butterflies responding to unusually warm conditions, and species unusual to the project sites are being detected.

Over the project’s nine years, butterflies have generally been most abundant during the first half of August.

But in 2015, they were most prevalent in early to mid July — a warm year with drought conditions that the Office of the Washington State Climatologist said was like a dress rehearsal for a warmer future.

“We see variation each year, but 2015 was a very warm and dry summer with snowmelt two to three weeks early, and peaks in butterfly abundance and plant flowering peaks also shifted by two to three weeks,” Rochefort said. “We think we may see more seasons like that in the future.”

Also likely in the future are larger concentrations in the North Cascades of butterfly species currently more at home at lower elevations or in mountain ranges to the south.

“One of the things we’re finding is butterflies that wouldn’t normally be seen in alpine areas, so that’s one of the biggest changes we’ve seen, is the presence of lowland species,” Brewer said.

Among them is a critter considered a garden pest — the cabbage moth.

“We have also documented butterflies like California tortoiseshells and painted ladies that have had peaks or population eruptions due to wetter and warmer weather south of us in California, and also moved or flown near us,” Rochefort said.

For now, among the most commonly seen butterflies on Sauk Mountain are small blue varieties that rely on colorful lupine and white yarrow flowers.

Throughout the summer, volunteers will survey butterflies and flowers at 10 sites in the North Cascades — along the Sauk Mountain, Skyline Divide, Cascade Pass, Easy Pass and Maple Pass trails — and at another five near Mount Rainier.

Volunteers also document the weather — clear or cloudy, windy or calm — and the temperature.

Although the weather can change rapidly in alpine areas, butterflies respond almost immediately.

Brewer calls butterflies solar powered because she’s seen swarms of them emerge from the brush when the sun comes out, then sink back into hiding when clouds block the warmth of the sun.

“They’re still there, we just don’t see them,” she said.

The recent visit to Sauk Mountain was no exception.

During sunny moments, many butterflies flitted about the trail, captivating hikers. When clouds rolled in, the activity stopped, with only a few butterflies clinging to trailside flowers but not flying.

Volunteers Charlie Carmichael and Nicole Sieger, who are new to the program this year, led the recent effort on Sauk Mountain. They are college students for whom the project provides an opportunity to complete fieldwork related to their studies.

Sieger said three years ago she was out hiking when she saw Cascades Butterfly Project volunteers at work on Sauk Mountain.

Because many of the about 30 volunteers who participate do a single hiking survey per year, Rochefort said the project would benefit from having more volunteers.