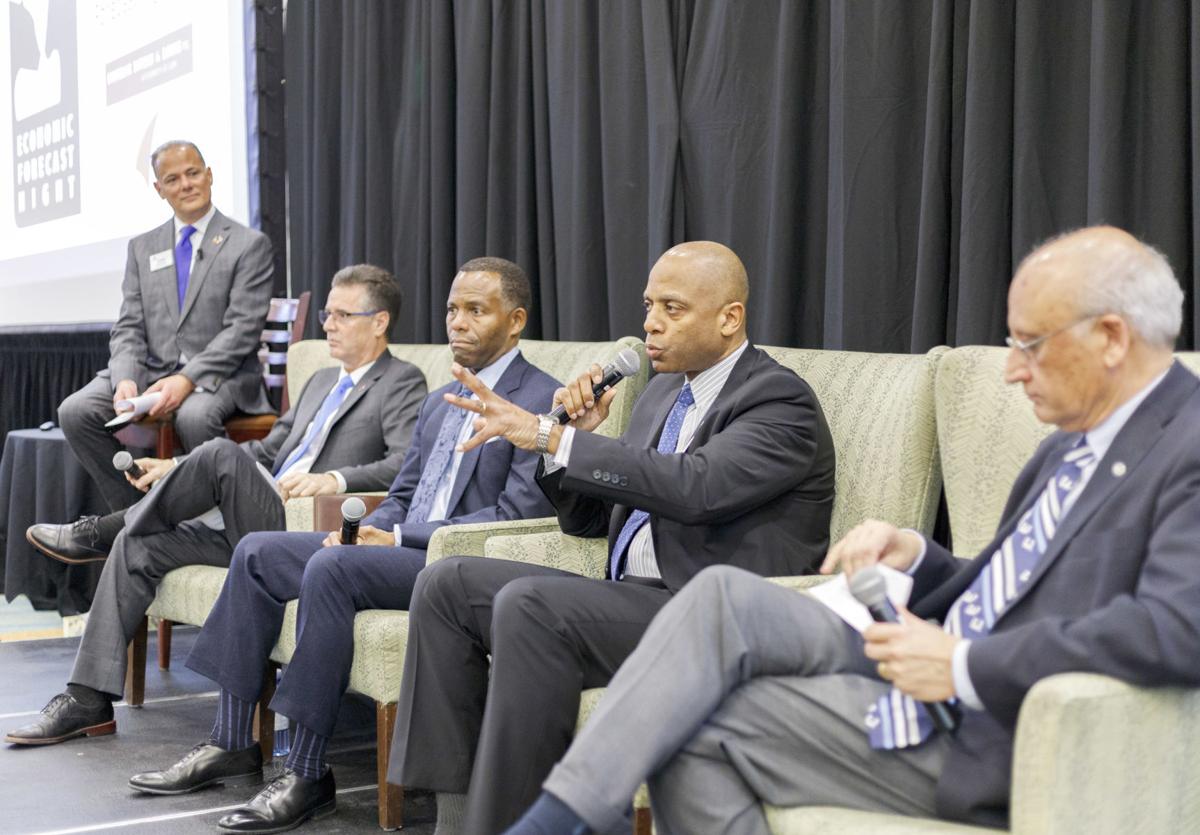 Paul Pitre, chancellor for Washington State University’s Everett campus, speaks Tuesday during a panel on workforce and education at the Economic Development Alliance of Skagit County’s Economic Forecast Night at the Swinomish Casino & Lodge. The other panelists were Tom Keegan, president of Skagit Valley College (second from left); Isiaah Crawford, president of the University of Puget Sound; and Sabah Randhawa, president of Western Washington University. 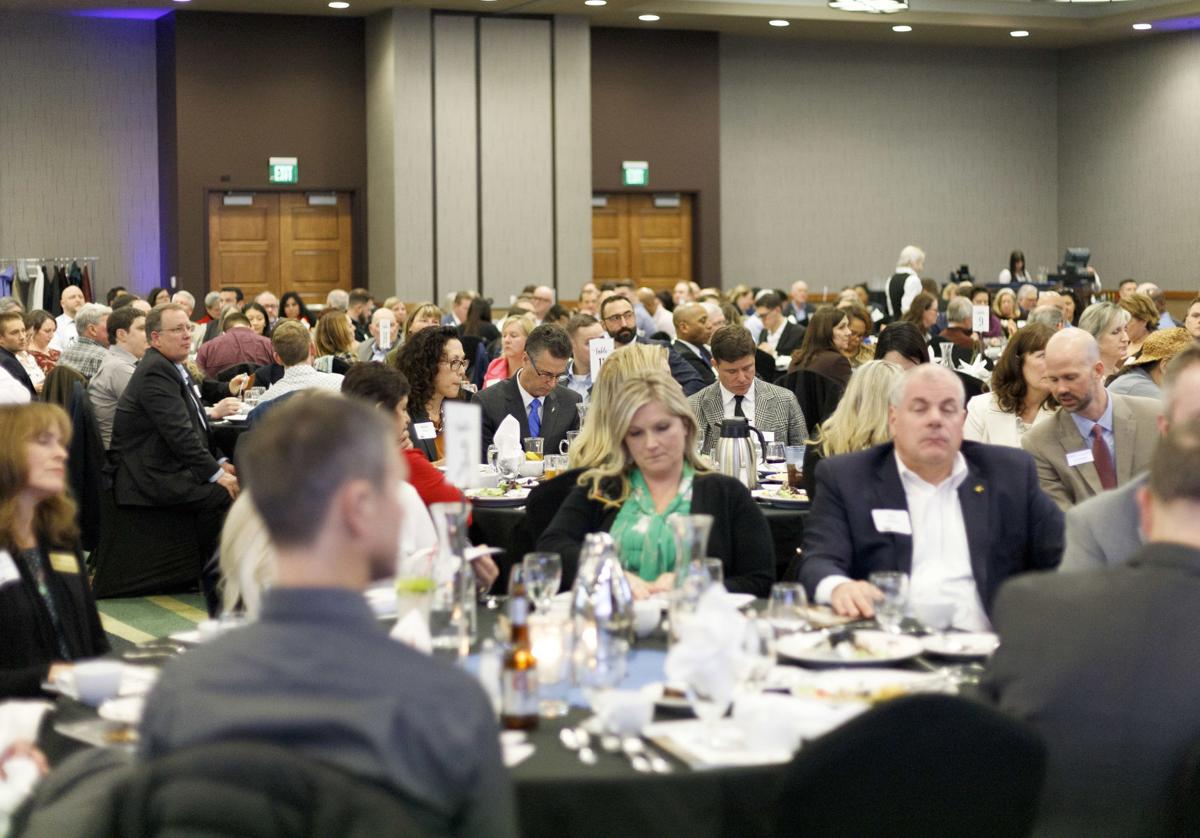 Attendees Tuesday at the Economic Forecast Night at the Swinomish Casino & Lodge in Anacortes.

Paul Pitre, chancellor for Washington State University’s Everett campus, speaks Tuesday during a panel on workforce and education at the Economic Development Alliance of Skagit County’s Economic Forecast Night at the Swinomish Casino & Lodge. The other panelists were Tom Keegan, president of Skagit Valley College (second from left); Isiaah Crawford, president of the University of Puget Sound; and Sabah Randhawa, president of Western Washington University.

Attendees Tuesday at the Economic Forecast Night at the Swinomish Casino & Lodge in Anacortes.

ANACORTES — Education and the need to prepare students for in-demand jobs and jobs of the future were a focus Tuesday of the Economic Development Alliance of Skagit County’s annual Economic Forecast Night.

The area is also drawing interest from businesses elsewhere in the country and abroad.

Sternlicht said Latitude Aero, a North Carolina-based aerospace firm, recently opened a facility in Burlington for the overhaul and repair of aircraft seating. And collaboration continues between local and Norwegian business leaders in the maritime industries.

Anneliese Vance-Sherman, regional labor economist for the state Employment Security Department, said the economy is in the middle of a long and unprecedented expansion, and economists have yet to predict a downturn.

In Skagit County, the unemployment rate was 5.4% as of December, Vance-Sherman said.

She said Skagit County is seeing about a 2% year-over-year annual growth rate in jobs, slower than in King County, where there is strong growth.

Vance-Sherman said the slower growth rate could indicate employers are struggling to find job candidates with the skills the employers are seeking. Meanwhile, many are moving to King County where wages continue to grow, she said.

In Skagit County, government, construction and manufacturing are some of the strongest industries, she said.

“(We need to) consider what are the skills needed in different occupations … and be thinking proactively about how to connect young people, and people who are transitioning from one job to another,” Vance-Sherman said.

She said education, and more partnerships between public and private sectors, can help address workforce needs.

Laurie Trautman, director of the Border Policy Research Institute at Western Washington University, gave an update on the impacts of trade disputes.

Trautman said while the recent first phase of a trade deal between the U.S. and China — including an agreement for China to purchase more U.S. agricultural products — has helped de-escalate the trade conflict, there is likely to be continued uncertainty.

“I think the worst of the trade war has passed, but we have lasting impacts,” she said. “It will take a while for investment relationships to build up again.”

Trautman said another concern for international trade is the recent coronavirus outbreak that has impacted China’s economy.

With workforce issues cited among the top concerns of area businesses, this year’s event included a panel on postsecondary education.

Randawa said in the next five years there will be an estimated 740,000 job openings in the state — and two-thirds will require postsecondary credentials. He said encouraging students to pursue bachelor’s degrees would best address these workforce needs.

Keegan said while his college focuses on providing career and technical training, he believes a liberal arts education is more important than ever.

“Our graduates will not only have multiple jobs, but multiple careers, and that requires the ability to be flexible and accept change,” he said. “Employers want technical skills, but also want people that can communicate, be a member of a team, and people that can think critically.”

He said there are multiple pathways to a bachelor’s degree, such as earning a two-year degree first. He added that those who earn a four-year degree have higher incomes over time.

Pitre said lifelong learning and worker retraining will be more important as the types of skills needed for jobs change. When students want to switch careers, colleges should make the transition easier, he said.

“We need to lay out that pathway so it’s not so difficult,” he said.