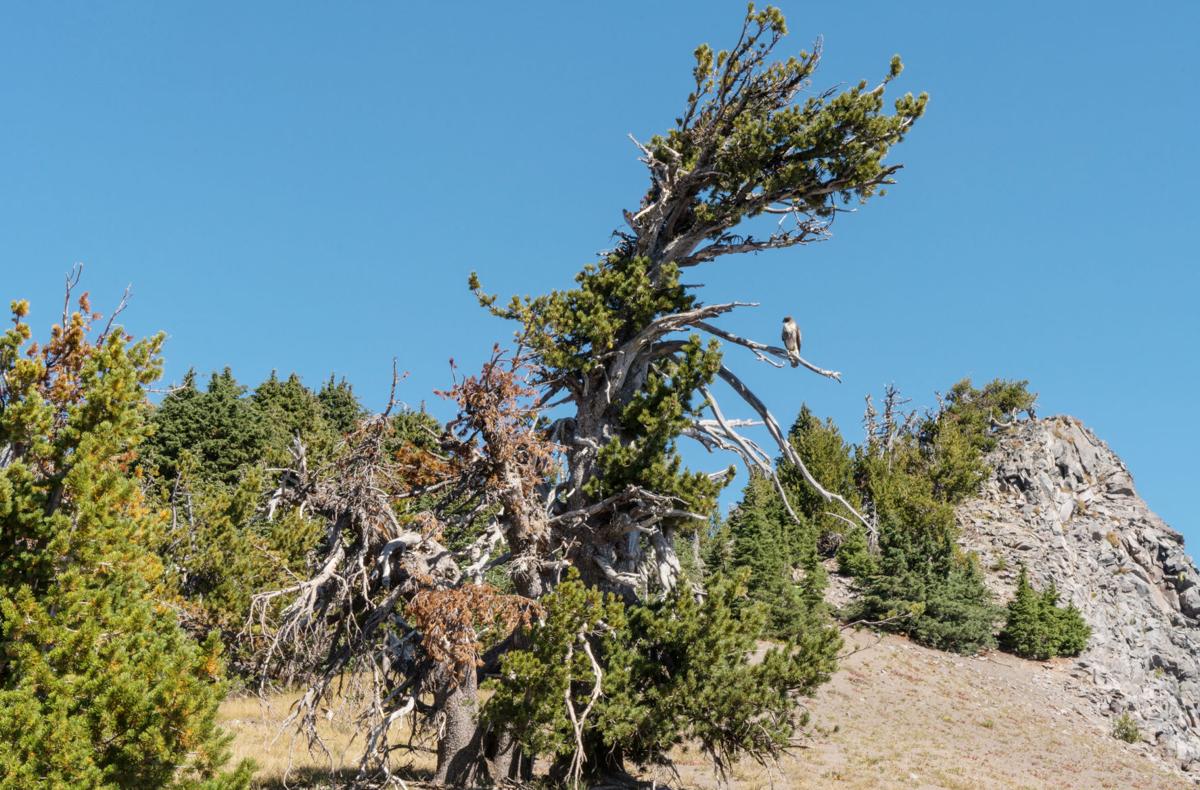 A peregrine falcon perches on the branch of a whitebark pine near Crater Lake, Oregon, in summer 2018. Whitebark pines are also found in remote areas of the North Cascades. 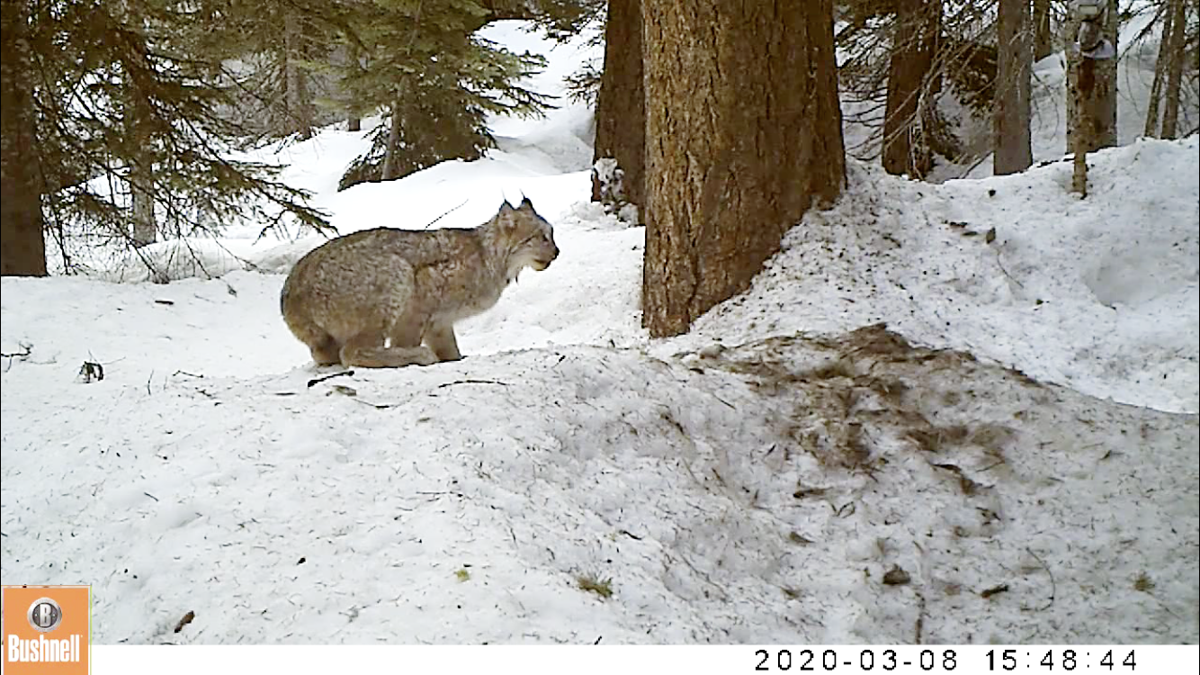 A Canada lynx was seen by a wildlife camera east of Skagit County in March 2020.

A peregrine falcon perches on the branch of a whitebark pine near Crater Lake, Oregon, in summer 2018. Whitebark pines are also found in remote areas of the North Cascades.

A Canada lynx was seen by a wildlife camera east of Skagit County in March 2020.

Several rare and at-risk species that are found in remote, mostly high-elevation areas of east Skagit County are getting attention this year at the federal level.

The U.S. Fish and Wildlife Service proposed Dec. 1 listing the whitebark pine as threatened under the Endangered Species Act, while conservation groups filed several lawsuits against the agency in December over the threatened Canada lynx, the wolverine and the grizzly bear.

The gnarled-looking whitebark pine and the handful of carnivores mentioned in the lawsuits are or have been found in areas of the North Cascades in Washington.

The whitebark pine is more common east of the crest of the North Cascades, but is also found in areas near Ross Lake, according to a North Cascades National Park Service map. Hiking guidebooks also mention the trees along the Maple Pass Loop near the Skagit-Chelan county border.

While the tree species may gain protection this year, the possibility of grizzly bear restoration was shelved in July, while long-sought protection for the wolverine was again denied in October and action stalled for the lynx.

When it comes to protecting the whitebark pine, the Fish and Wildlife Service’s reasoning goes beyond the disappearing tree itself.

The trees produce pine cones that offer nutrient-rich kernels sought out by critters including the Clark’s nutcracker, squirrels and even grizzly bears.

The U.S. Forest Service estimates as many as half of the trees have died throughout its range across the West, reducing a critical food source in harsh, high-elevation habitats.

The whitebark pine became a candidate for Endangered Species Act protection in 2011.

“Whitebark pine is experiencing an overall long-term pattern of decline,” a July 18, 2011 news release states. “On a landscape scale, the species appears to be in danger of extinction.”

For the whitebark pine, the spread of disease caused by climate change, beetle infestations, wildfire and encroachment of competing tree species pose threats in seven Western states, according to the Fish and Wildlife Service’s recent recommendation and to nonprofits including the Center for Biological Diversity.

The Canada lynx is an elusive animal that even researchers equipped with dozens of wildlife cameras get few glimpses of each year. According to the state Department of Fish & Wildlife, a small population in the North Cascades is all that remains in Washington.

On Dec. 1, the Western Environmental Law Center filed a lawsuit in the U.S. District Court of Montana on behalf of seven nonprofit conservation groups interested in seeing the lynx preserved.

“The opportunity to view lynx or signs of lynx in the wild by itself is of significant interest and value,” the lawsuit states.

The lawsuit challenges the Fish and wildlife Service’s Dec. 20, 2017, decision not to complete recovery planning for the lynx, which was listed as threatened in 2000 under the Endangered Species Act. The federal agency said in 2017 that it would instead prepare a delisting proposal because it considered the lynx recovered.

Neither a delisting nor a recovery plan have been prepared since that decision was made.

The groups involved in the lawsuit argue there is no scientific evidence that the lynx is recovered and say the Fish and Wildlife Service is in violation of the Endangered Species Act, which requires development of recovery plans for protected species.

At least one of the groups, Cascadia Wildlands, advocates specifically for protecting wildlife and wilderness in Washington state.

While the lynx has been rarely noted in Washington, staff of the North Cascades Institute have documented at least one near the organization’s Environmental Learning Center near Diablo during the winter.

The groups leading the lawsuit for the lynx are particularly concerned about the impact climate change may have on the wild cat and its prey — primarily the snowshoe hare — as mountain snowpack dwindles.

“Lynx and snowshoe hares only persist in areas with long winters and persistent deep snow,” the lawsuit states.

The Fish and Wildlife Service said in its 2014 document about habitat needs for the threatened species that “climate change is likely to be a significant issue of concern for the future conservation of lynx.”

The wolverine is a snow-dependent species that has been the subject of litigation since the 1990s.

Researchers have gone to great lengths to locate wolverines in the North Cascades for study, and estimate a population of about 300 may remain in the region.

Both Earthjustice and the Western Environmental Law Center filed two lawsuits over the wolverine in U.S. District Court of Montana on Dec. 14. Together, those lawsuits represent 22 organizations fighting for the protection of the species.

Conservation Northwest, an organization that advocates for several species in Washington state, is among them.

“For more than 25 years, the government has stonewalled federal protection for wolverine,” Dave Werntz of Conservation Northwest said in a news release.

Both lawsuits challenge the Fish and Wildlife Service’s Oct. 13 decision to withdraw an earlier proposal to grant the wolverine Endangered Species Act protection.

“This is yet another chapter in this administration’s war on science,” Western Environmental Law Center attorney Matthew Bishop said in a news release. “We’re back in court challenging an agency that continues to put politics over science.”

The wolverine’s survival is directly tied to snow, which it uses to create shelter — called denning — while raising its young.

While climate change hasn’t been a concern raised for North Cascades grizzly bears, the species has been referred to as a ghost of the region, and its potential restoration has long been a contentious issue.

A recent lawsuit over the grizzly bear was filed Dec. 16 in the U.S. District Court for the District of Columbia.

The lawsuit challenges the recent termination of a program aimed at restoring grizzly bears to the North Cascades in Washington. In the past decade, biologists have documented only four grizzly bears in the region.

“The Trump administration’s purely political decision to axe this conservation program was a massive blow to the grizzly bear recovery program,” Center for Biological Diversity attorney Andrea Zaccardi said in a news release. “We’re hopeful that our lawsuit will put grizzly bears in the North Cascades back on the road to recovery.”

“Grizzly bears once thrived in the North Cascades and they could again, but only if the feds do their job,” Zaccardi said.