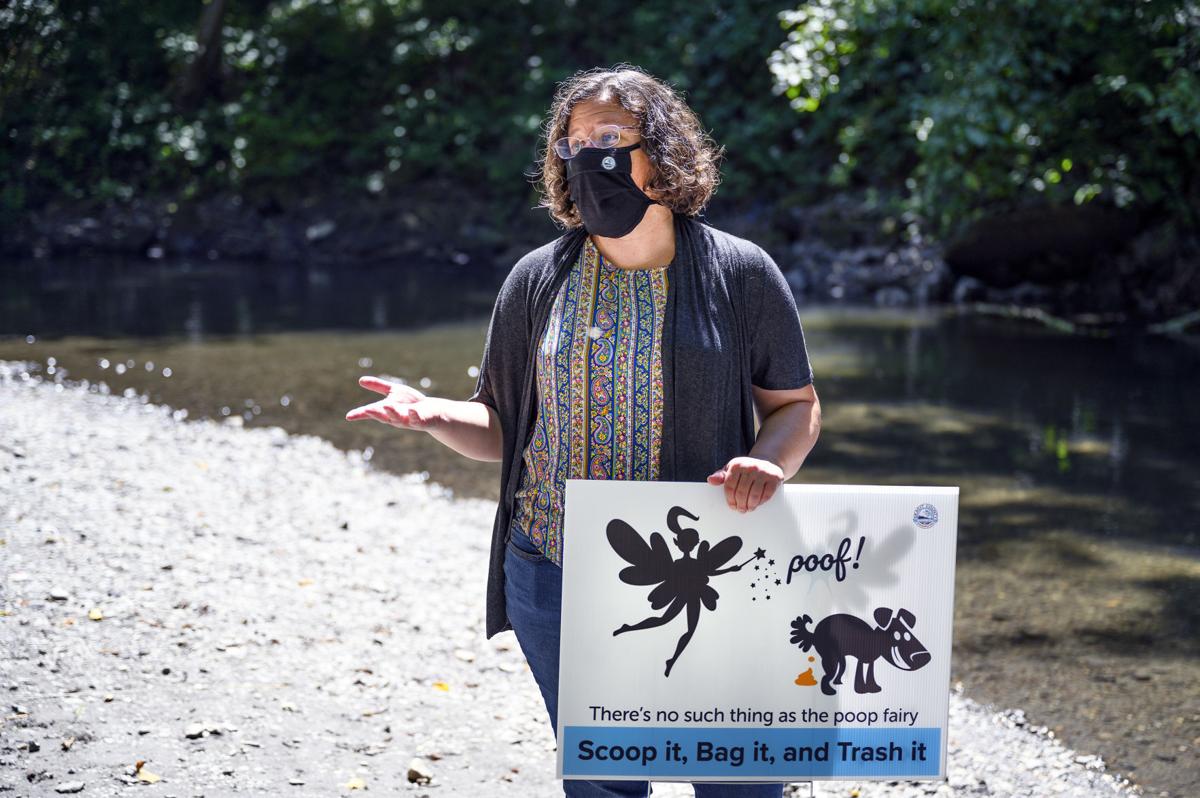 Skagit County Pollution Identification and Correction Coordinator Karen DuBose holds a sign Wednesday to be placed at the entrance to a state recreation area along the Samish River north of Burlington. The sign is a reminder that canine fecal pollution in Skagit County rivers and streams can lead to shellfish contamination downstream. 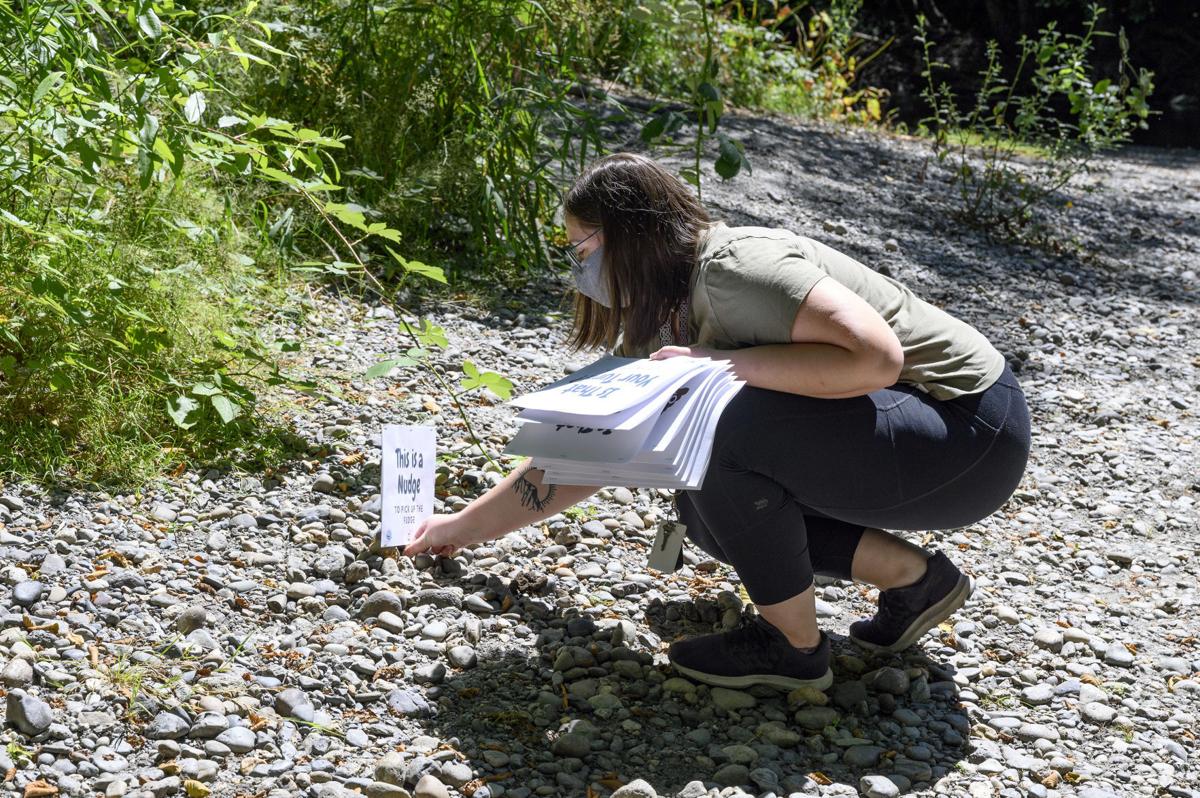 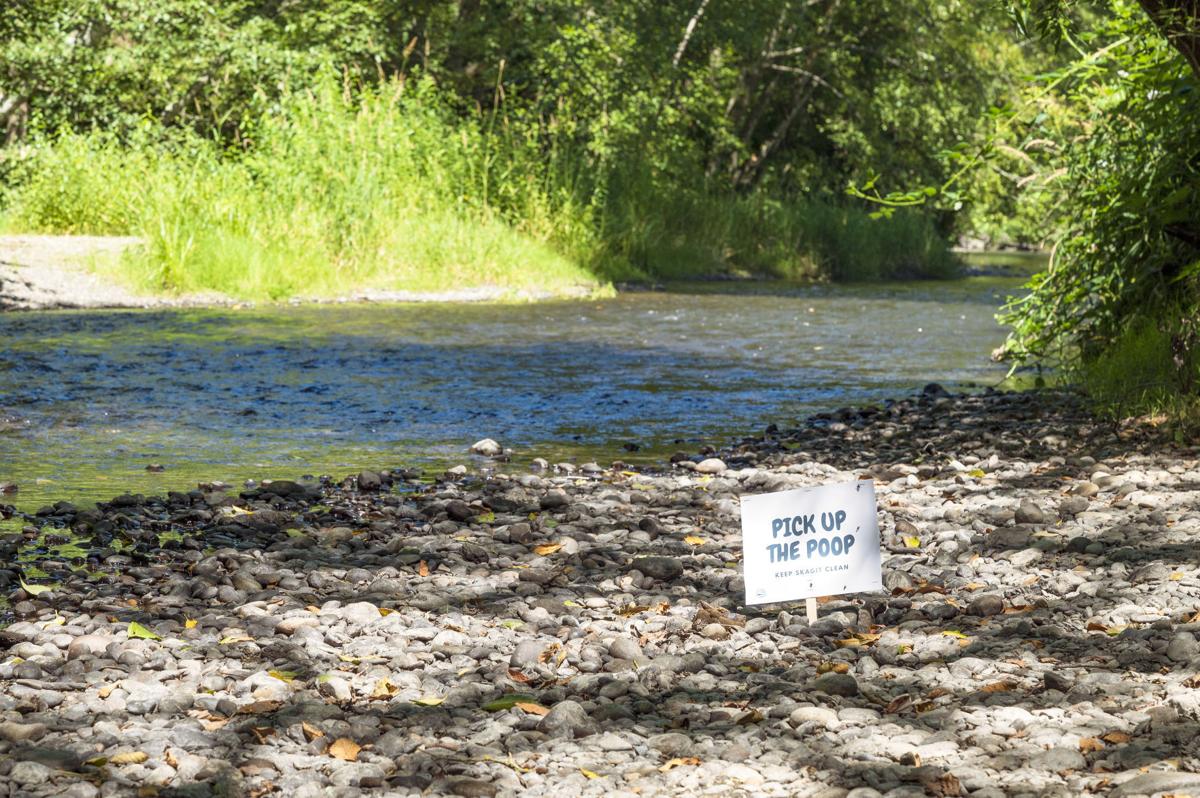 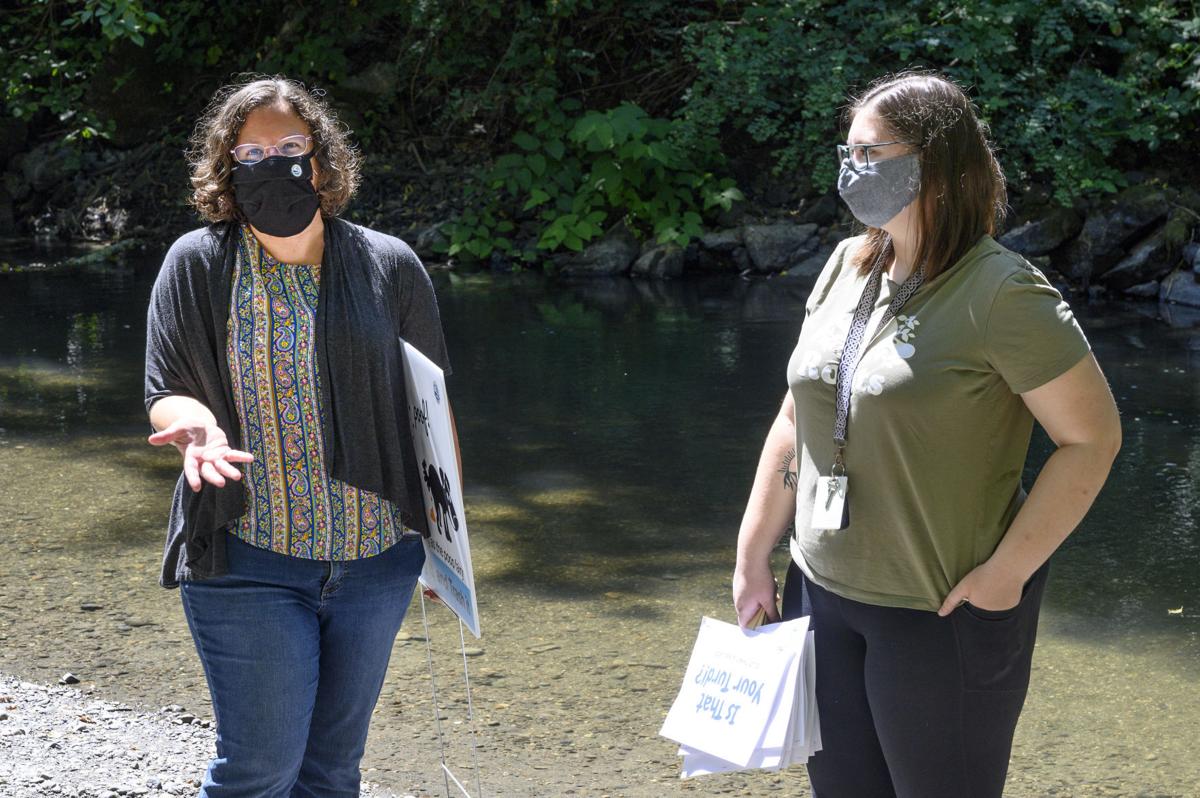 Skagit County Pollution Identification and Correction Coordinator Karen DuBose holds a sign Wednesday to be placed at the entrance to a state recreation area along the Samish River north of Burlington. The sign is a reminder that canine fecal pollution in Skagit County rivers and streams can lead to shellfish contamination downstream.

Caitlin McKay used to walk dogs for cash when she was younger. For her, picking up after the dogs was always a given.

Now, she’s spending some of her summer internship helping educate local dog walkers and dog owners who skip that second step — leaving behind piles of poop exposed to the elements and, ultimately, contributing to water quality problems in local streams and rivers.

They found several neglected piles of dog poop on the rocky beach that’s a short walk from a state Department of Fish & Wildlife parking area.

At each, McKay staked a sign in the ground with a message. Among them, “This is a nudge to pick up the fudge.”

“It’s just a friendly reminder with a little bit of humor,” DuBose said.

It’s also part of a broader effort to reduce water-polluting dog poop found at parks, on trails and in yards throughout the county.

“We’re trying to bring awareness to what’s going on,” DuBose said as the Samish River flowed behind her.

Efforts to find and eliminate sources of fecal coliform bacteria — a sign that human or animal feces are present — have been ongoing in the Samish watershed for years.

Regardless of whether it comes from septic systems, livestock manure, pet waste or wildlife, bacteria in the water is bad news for shellfish farms downstream in Samish Bay.

Because many people eat shellfish raw and bacteria can make them sick, harvesting must be closed if fecal coliform bacteria reaches a certain threshold, or even if water levels reach a level known to correspond with increasing amounts of the pollution presumably washed into the river system by rain.

“You have neighbors downstream that you are affecting their businesses,” DuBose said of the Steelhead Lane neighborhood north oaf Burlington where she and McKay were working. “You are literally making them shut down and costing them money.”

DuBose and McKay are focused on this part of the watershed because of a call from a resident about the dog poop problem and a recent analysis of past water quality data.

“There has always been this weird little mystery area. There was something happening between the bridge (over the river at Old Highway 99) and Chuckanut Drive,” DuBose said.

After years of head-scratching, she thinks they’ve solved the mystery. The area has an easily accessed beach where it appears multiple dog walkers do not pick up after their dogs.

But this isn’t the only area where dog poop is problematic. Coinciding with the county’s effort, the Skagit Conservation District has launched a “There’s no such thing as the Poop Fairy” campaign in cities throughout the county.

“The message is simple: ‘Only you can make your dog’s waste disappear.’ Scoop it. Bag it. Trash it,” a news release about the program states.

Skagit Conservation District Outreach Coordinator Kristi Carpenter said about 300 signs have been placed in parks, along trails and in neighborhoods. The district’s campaign is being done as part of an education program required of the cities under federal stormwater permit regulations.

As an ongoing part of the campaign, volunteers are documenting how much dog poop they find in parks and on trails. So far, they have documented as many as 33 piles during a single 2-hour outing on part of the Port of Skagit’s nature trail, according to data provided by Carpenter.

“They think it’s just going to disappear, but it doesn’t,” DuBose said of the humans responsible.

In the Steelhead Lane neighborhood, she is also piloting a program requesting pledges from residents to always pick up after their dogs.

Because of the COVID-19 pandemic, DuBose is sending requests for pledges by mail. If residents in the neighborhood take interest and sign on, the program could be expanded.

It would be lovely if the same effort for picking up animal waste was reinforced in residential communities County wide. I'm rather tired of the neighbor's three dogs (supposed to only have 2) leaving the poo in the yard, or waiting until I turn my lights out for the night and letting them poo in my yard. Not only is leaving waste polluting, it's against the law. Thank you for your efforts.