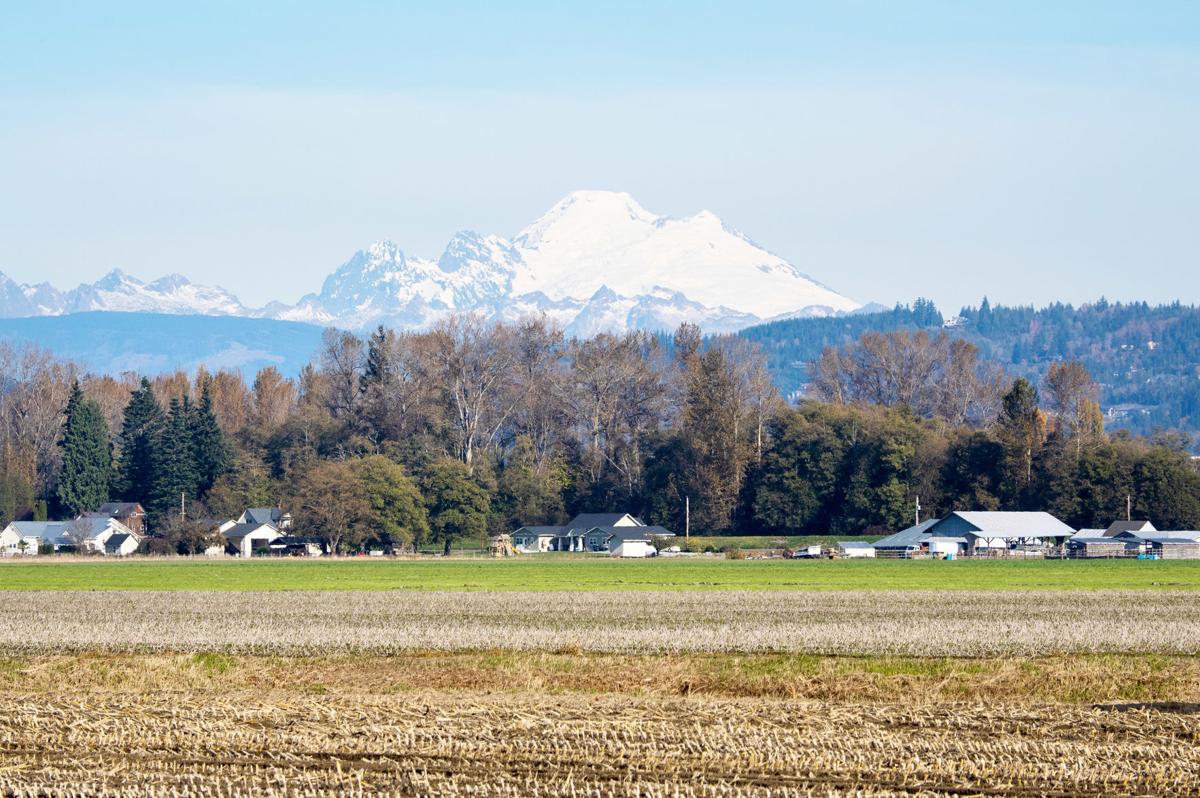 Mount Baker stands above the Skagit Valley on Nov. 2. Skagit County is sandwiched between two high-risk volcanoes — Mount Baker to the north and Glacier Peak to the south. 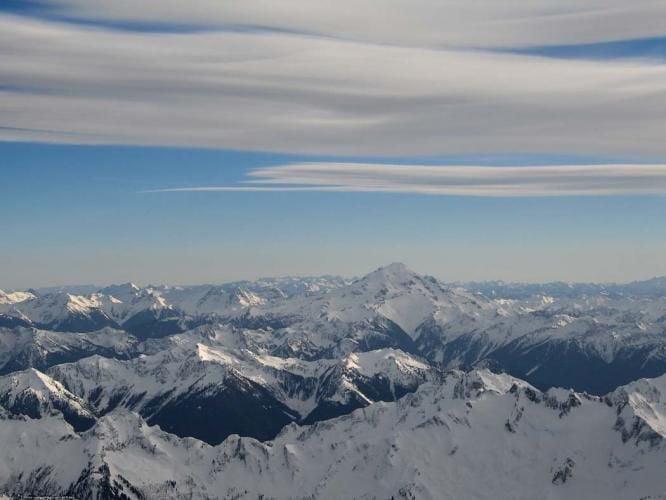 Glacier Peak, the tallest peak in this photo, is a volcano that blends in with other mountains of the North Cascades. 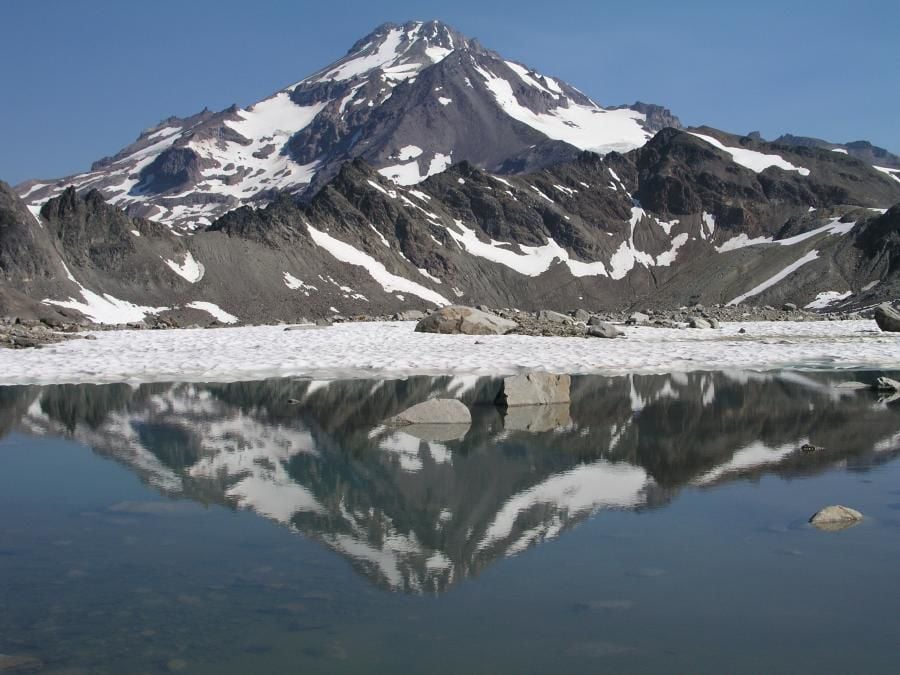 Glacier Peak is a volcano in the Cascades that is less famous than the more visible and more accessible Mount Baker, Mount St. Helens and Mount Rainier. 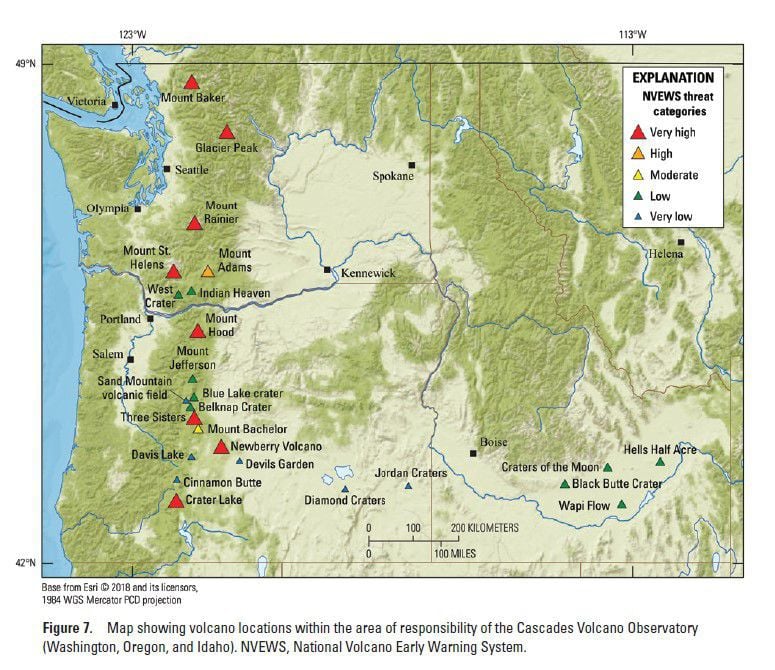 This map from a 2018 U.S. Geological Survey assessment of volcanic threats shows that Mount Baker and Glacier Peak are ranked high risk alongside better-known volcanoes such as Mount St. Helens and Oregon’s Mount Hood. 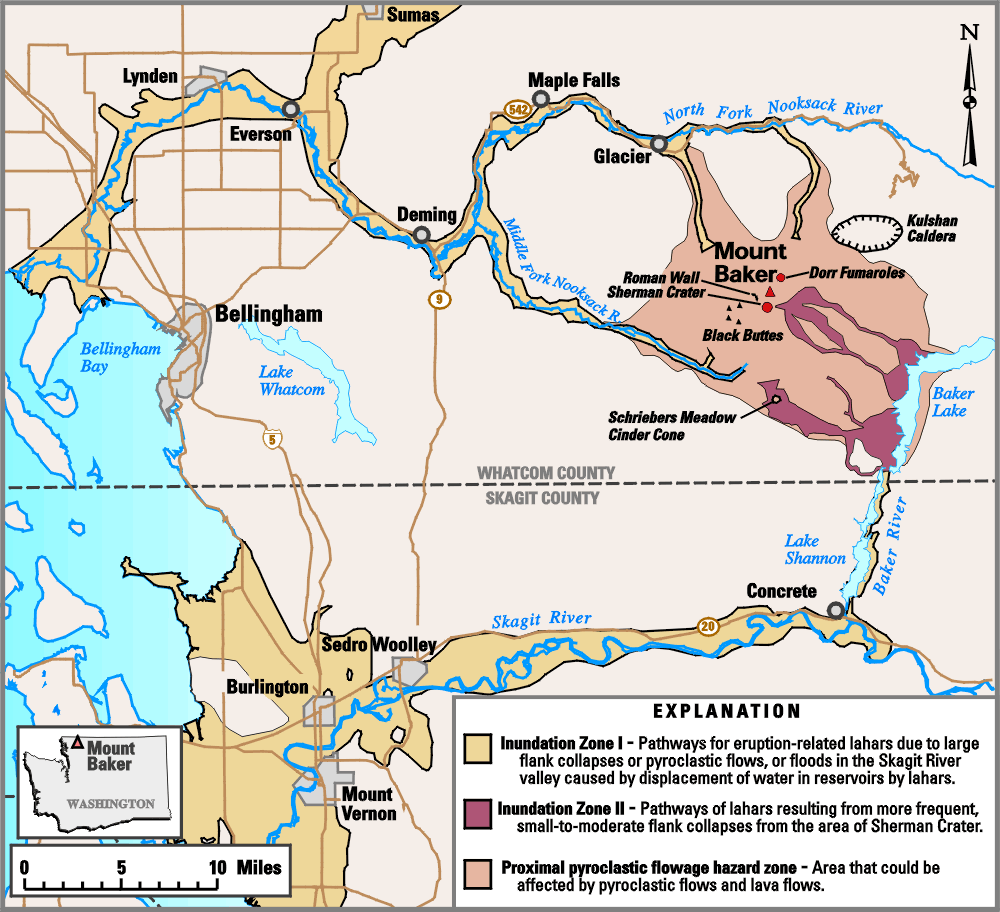 An eruption from Mount Baker could send lahars, which are volcanic landslides mixed with mountain snow and ice, into the Skagit Valley as shown in orange. 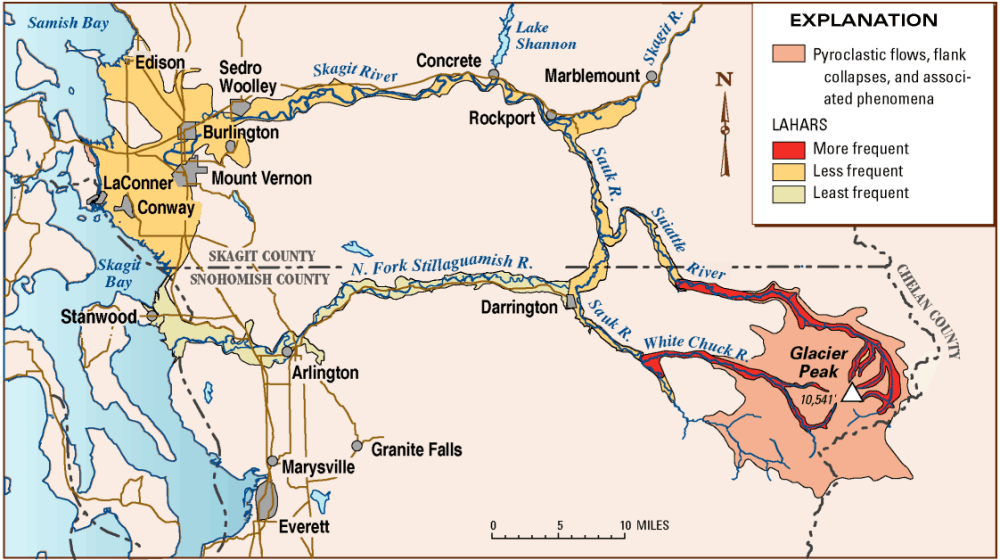 An eruption from Glacier Peak could send lahars, which are volcanic landslides mixed with mountain snow and ice, into the Skagit Valley as shown in orange.

Mount Baker stands above the Skagit Valley on Nov. 2. Skagit County is sandwiched between two high-risk volcanoes — Mount Baker to the north and Glacier Peak to the south.

Glacier Peak, the tallest peak in this photo, is a volcano that blends in with other mountains of the North Cascades.

Glacier Peak is a volcano in the Cascades that is less famous than the more visible and more accessible Mount Baker, Mount St. Helens and Mount Rainier.

This map from a 2018 U.S. Geological Survey assessment of volcanic threats shows that Mount Baker and Glacier Peak are ranked high risk alongside better-known volcanoes such as Mount St. Helens and Oregon’s Mount Hood.

An eruption from Mount Baker could send lahars, which are volcanic landslides mixed with mountain snow and ice, into the Skagit Valley as shown in orange.

An eruption from Glacier Peak could send lahars, which are volcanic landslides mixed with mountain snow and ice, into the Skagit Valley as shown in orange.

Views of Mount Baker and access to the rugged North Cascades are celebrated parts of the scenery of the Skagit Valley and the lifestyle of those who live here, but those landscape features also pose a threat to local communities.

Mount Baker, in plain sight as a white-capped dome on days when the sky is clear, and Glacier Peak, a somewhat camouflaged mountain in a sea of jagged ridges, are volcanoes that have and could again reshape the Skagit River valley.

Given the volcanoes’ history of eruptions and the presence of people and infrastructure now in their wake, the U.S. Geological Survey ranks Mount Baker and Glacier Peak as the 14th and 15th highest-risk volcanoes in the country and its territories.

Out of 161 active volcanoes, that puts those that flank Skagit County in the top 9%.

Yet little is done to monitor rumbling, shifting and belching that could indicate the sleeping giants are waking up.

“We could use more monitoring at most volcanoes in the Cascades,” Cynthia Gardner of the USGS Cascades Volcano Observatory said. “It’s been a question of priorities and costs.”

The only equipment taking the pulses of Mount Baker and Glacier Peak are operated by the Pacific Northwest Seismic Network out of the University of Washington to see earthquakes, which can be early indicators that an eruption is coming. Of those seismic monitoring stations, there are two on Mount Baker and one on Glacier Peak.

Cascades Volcano Observatory scientist Wes Thelan compared the single monitoring station on Glacier Peak to a police officer having only one witness to a crime.

Plans are slowly taking shape to bring more monitoring equipment to the area.

From federal volcano experts to local officials, the consensus is that more monitoring is needed. Having more eyes on a volcano gives the experts a clearer picture of what’s happening, which can allow them to better inform communities nearby of what to expect and how to react.

“I’m 100% in support of any efforts to get more monitors up on those slopes because that is going to be absolutely crucial for a community like ours to have as much advanced warning as possible,” Concrete Mayor Jason Miller said.

Tucked in the bottleneck of the Skagit River valley, Concrete is at risk of volcanic landslides called lahars from both Mount Baker to the north and Glacier Peak to the south.

Miller said Mount Baker is the more threatening of the two because it towers over the town, and it’s unknown whether a lahar from its slopes would topple the two Baker River dams that sit between the volcano and the town.

“It’s so stinking close that we’re going to really have to scramble (if an eruption occurs),” he said. “Mostly it’s get to high ground and pray.”

Layers of ash and deposits of rock found from the tops of the Cascades to the mouths of nearby rivers have shown that no two eruptions are alike. Eruptions at Mount Baker and Glacier Peak have occurred hundreds or thousands of years apart and ranged from small eruptions of rock and steam to lahar-producing eruptions that dwarf what was seen at Mount St. Helens in May 1980.

Worst-case scenarios here include a lahar from Mount Baker destroying the Baker River dams, gathering rock and homes and cars on its way downstream from Concrete to as far as La Conner, and pushing the river into its floodplain. A lahar from Glacier Peak could come down the Sauk River toward its convergence with the Skagit River near Rockport.

“The main issue for Skagit County is the lahar question, and the way you get a lahar is something hot like magma melting all the ice up there and having it come down into the lowlands,” Cascades Volcano Observatory Scientist-in-Charge Seth Moran said.

Skagit County Board of Commissioners Chair Lisa Janicki, who represents the eastern portion of Skagit County including Concrete and Rockport, said the county supports USGS efforts to improve monitoring.

“If the scientists think that additional monitoring is important, it’s important that we support that and the federal government correctly funds USGS for these high-probability locations,” she said.

Aside from monitoring, preparation by residents is essential in order to take advantage of any early warning.

Emergency preparedness experts recommend three steps: Sign up for emergency alerts, agree to a plan with loved ones, and put together emergency kits for staying home as well as go-kits for evacuating.

The observatory was established after the 1980 eruption of Mount St. Helens, an event still fresh for many who experienced it.

“I was a college student in Spokane when St. Helens erupted, and I remember being just dumbfounded with how much ash had covered the campus, and they were plowing the ash with snow plows and cars were disabled because it had been sucked into the air filters of vehicles,” Janicki said.

The observatory is now a place for USGS scientists to study, monitor and share with the public information about volcanoes from Mount Baker to Crater Lake, Oregon, in an effort to avoid such shock when the next major eruption occurs.

Moran said the 20-station network that exists today at Mount St. Helens is seen as “the gold standard” for monitoring high-risk volcanoes. But the USGS doesn’t have the resources to outfit all Cascades volcanoes at that level.

For now, Ben Pauk of the Cascades Volcano Observatory said the goal is to bring four new monitoring stations to some of the region’s volcanoes, starting with Oregon’s Mount Hood when the weather allows, then moving on to Glacier Peak and Mount Baker if permits are approved and funding provided.

The USGS has applied for permits to install four monitoring stations at Glacier Peak and plans next summer to look for the best monitoring sites on Mount Baker.

The federal agency is hoping to receive funding to boost these efforts in 2020 through the National Volcano Early Warning System Act that Congress passed in March.

“The whole goal is to put out instruments so that we are able to detect the earliest, most subtle signs that something is happening,” Moran said.

Monitoring has been shown to work. While the eruption of Mount Kilauea in mid-2018 destroyed hundreds of homes on the island of Hawaii, no one died — a feat the USGS credits to the monitoring efforts of the Hawaiian Volcano Observatory.

Moran said the goal for Mount Baker and Glacier Peak is to eventually have 12 monitoring stations with the capabilities to identify earthquakes and ground movement, and possibly emissions of volcanic gases.

“There is great interest in having more stations,” Steve Malone of the Pacific Northwest Seismic Network said. “What you want is really a distribution: You want several that are right on the mountain itself and a couple that are off the mountain a little bit.”

The ability to triangulate where earthquakes are coming from and to sense movement — such as the bulge that grew out of the side of Mount St. Helens leading up to the 1980 eruption — using GPS tools are critical to effective monitoring.

“With volcanoes you want to be looking at things pretty precisely,” Moran said. “At Mount Baker you want to know if it’s going to come through Sherman Crater or under the summit, or from under the volcano or through the side.”

Pauk said that’s why the USGS is working to add monitoring stations outfitted with earthquake and GPS capabilities to Mount Baker and Glacier Peak.

Sensors that can identify the types of gas coming from Mount Baker’s Sherman Crater, such as in the steam that rises constantly since a scare in 1975 and is visible on cold winter days, are also important tools the agency may eventually look to add.

For now, the USGS has determined that steam, which is mostly water vapor, is not a threat. Sulfurous gases, however, could indicate magma is approaching the surface.

“We’re not able to look at the plume coming out of Mount Baker and say whether there has been a change in the chemistry of that plume, which would happen as magma moves higher,” Moran said.

However, that situation is less than ideal. Moran cautions that weather conditions could interfere with helicopter flights and visibility in places such as the North Cascades.

Pauk, who manages the emergency monitoring devices, said it’s best to have a permanent network so time is not lost should an eruption become imminent.

“We never want to be in a situation where we are playing catch-up,” he said. “We want to have instruments in place.”

When it comes to volcanoes, experts encourage awareness

t is difficult to predict when a volcano such as Mount Baker or Glacier Peak will erupt.

— Learn about nearby volcanoes. Know where they are, what it means that they're active and what the worst-case scenarios are for an eruption. The state Department of Natural Resources has a website with information from federal, state and local agencies: skagit.ws/DNRvolcanoes.

— Have a response plan. Make sure your family has an emergency kit prepared in case of a disaster and knows to leave the area if told to evacuate. Ready.gov offers tools to help.

In a region at risk of disasters such as volcanic eruptions and major earthquakes, and where flooding and windstorms are commonplace, official…