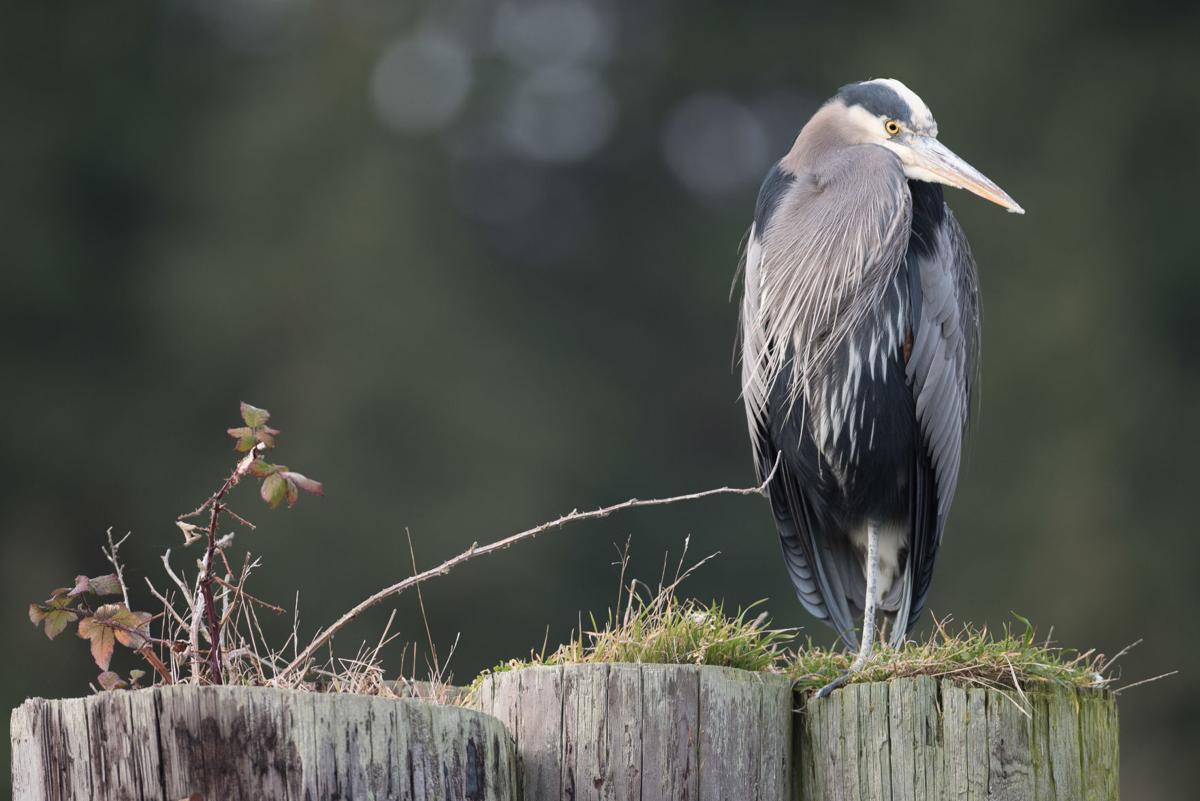 A heron sits atop a piling in the Swinomish Channel on Dec. 3 in La Conner. 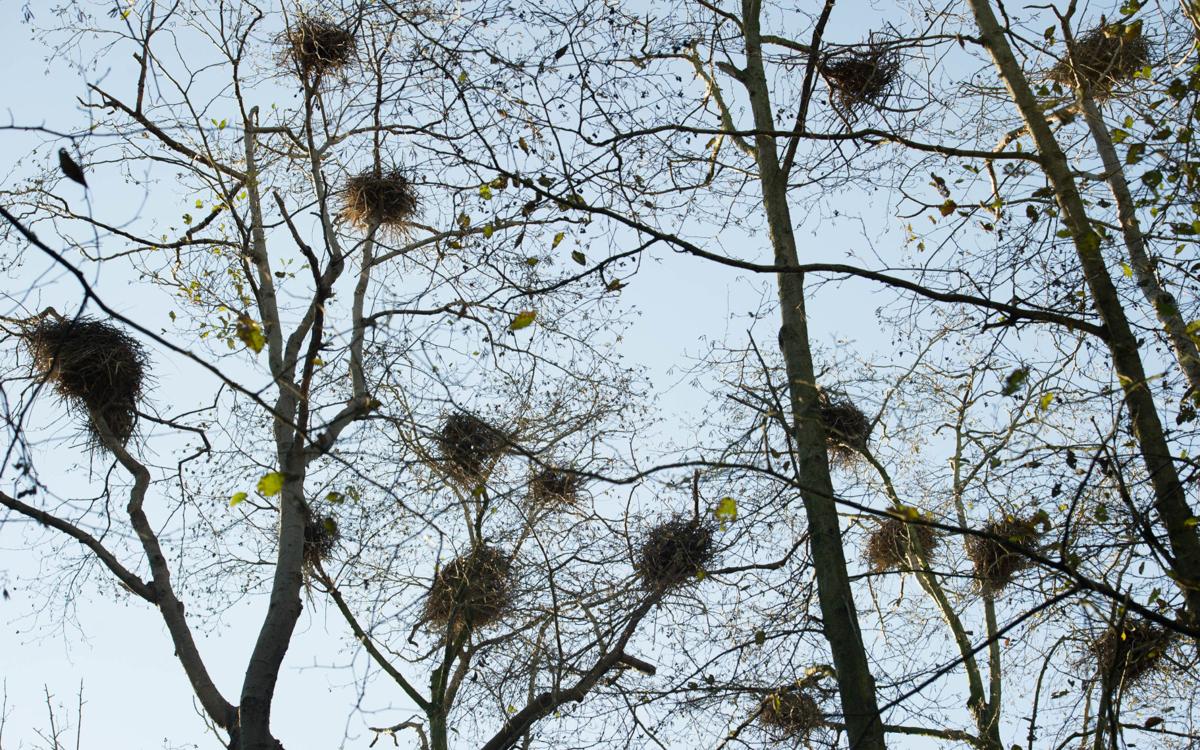 Heron nests dot trees in a wooded area of March Point on Dec. 4. The nests are counted every year by the Skagit Land Trust to record their numbers and examine the health of the trees in which they reside. 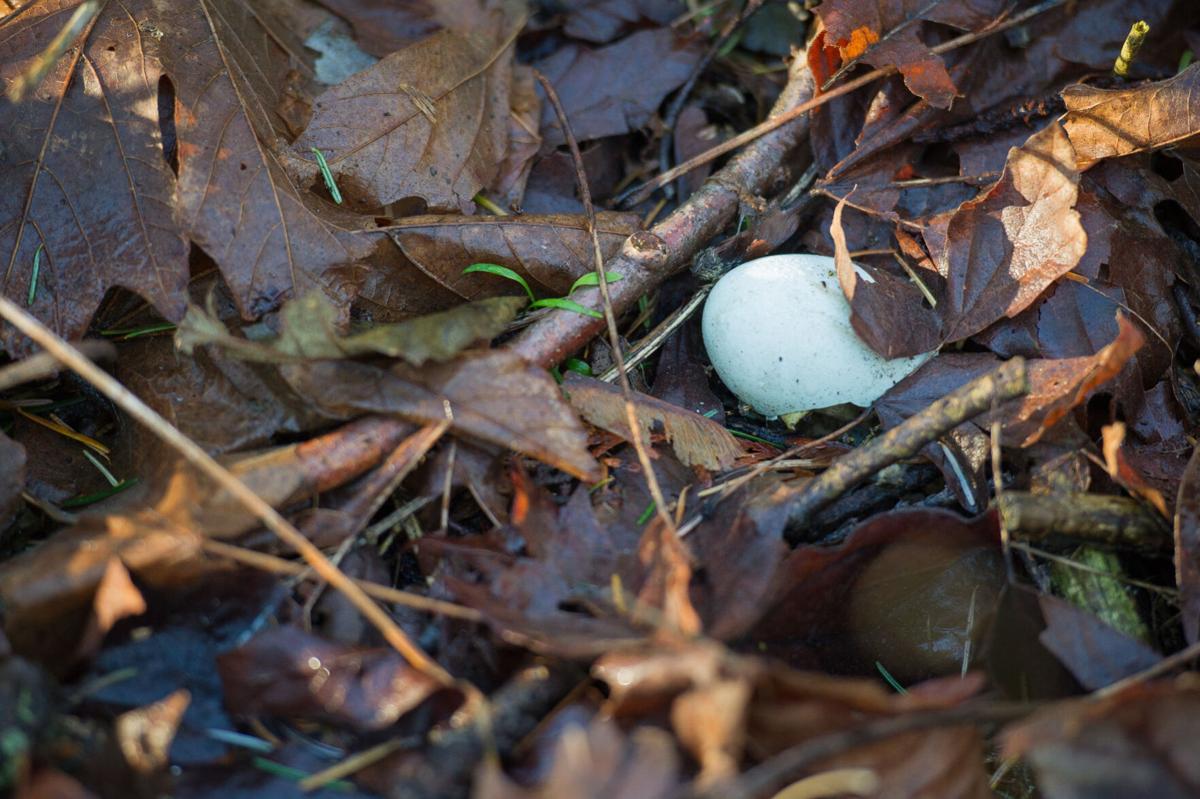 The blue shell of a heron egg peeks out among leaves and branches on the ground of the March Point heron rookery on Dec. 4.

MARCH POINT — Some of the region’s great blue herons will begin their seasonal move-in this month at a rookery, or nesting site, on March Point.

Each year herons congregate on this patch of forestland, which has a view of nearby Padilla Bay and, on clear days, Mount Baker in the distance.

The Skagit Land Trust protects this land for the herons, which feed on fish and critters in area bays when the tide is low.

In December, Skagit Land Trust staff and volunteers completed an annual survey of nests in the rookery. The dwellings of sticks and leaves could shed light on just how many herons may temporarily call the site home.

Skagit Land Trust Volunteer & Education Programs Coordinator Stacy Dahl said the numbers have fluctuated over the years, likely because of factors including some nests being built in neighboring forested areas outside the survey area, and the occasional influx of birds from elsewhere.

“In 2018 there was significant increase in the number of nests, probably due to the Samish Island heronry abandonment,” she said.

The year before, in 2017, herons mysteriously abandoned the second known rookery in Skagit County, at Samish Island. They have yet to return.

Dahl said prolonged human noise, predators or some unknown factor may have scared the herons off, but the cause will likely never be known for certain.

Still, herons have been known to return to abandoned rookeries up to 10 years after leaving.

Meanwhile, March Point remains a stronghold for the birds. Over at least the past 15 years, surveys at March Point have shown overall growth in the number of nests.

“I feel like I just walked into a heron city,” volunteer Rachel VanBoven said as she took part in the survey Dec. 4.

After plodding into the fern- and nettle-rich underbrush, she looked up to see dozens of nests dotting the otherwise winter-bare branches of trees. Skagit Land Trust staff said the lush greenery below is owed in part to fertilization by heron droppings from the nests.

Dahl said bigleaf maples, with their network of outspread branches, are the most densely populated trees.

“They believe in housing density, not urban sprawl,” Skagit Land Trust Conservation Director Michael Kirshenbaum said while taking in the scene of the “heron city” Dec. 4.

The March Point rookery is one of the largest on the West Coast, according to the Skagit Land Trust. Before being abandoned, the former Samish Island rookery wasn’t far behind.

Dahl said as many as 396 nests in 168 trees had been counted there during similar seasonal surveys. In 2017, the year it was vacated, 277 nests were counted in 155 trees.

While a growing population of bald eagles that spend winter in the region is one theory as to why the Samish Island rookery was abandoned, the March Point rookery has a resident pair of bald eagles that have an apparent symbiotic relationship with the herons.

“I think of them like a king and queen that demand an occasional sacrifice,” Kirshenbaum said.

The herons that build their nests around the bald eagles’ roost may lose the occasional hatchling to the white-headed pair, but the eagles also defend the territory from other predatory birds. That’s better, Kirshenbaum said, than losing a multitude of young to many visiting eagles swooping in for easy meals.