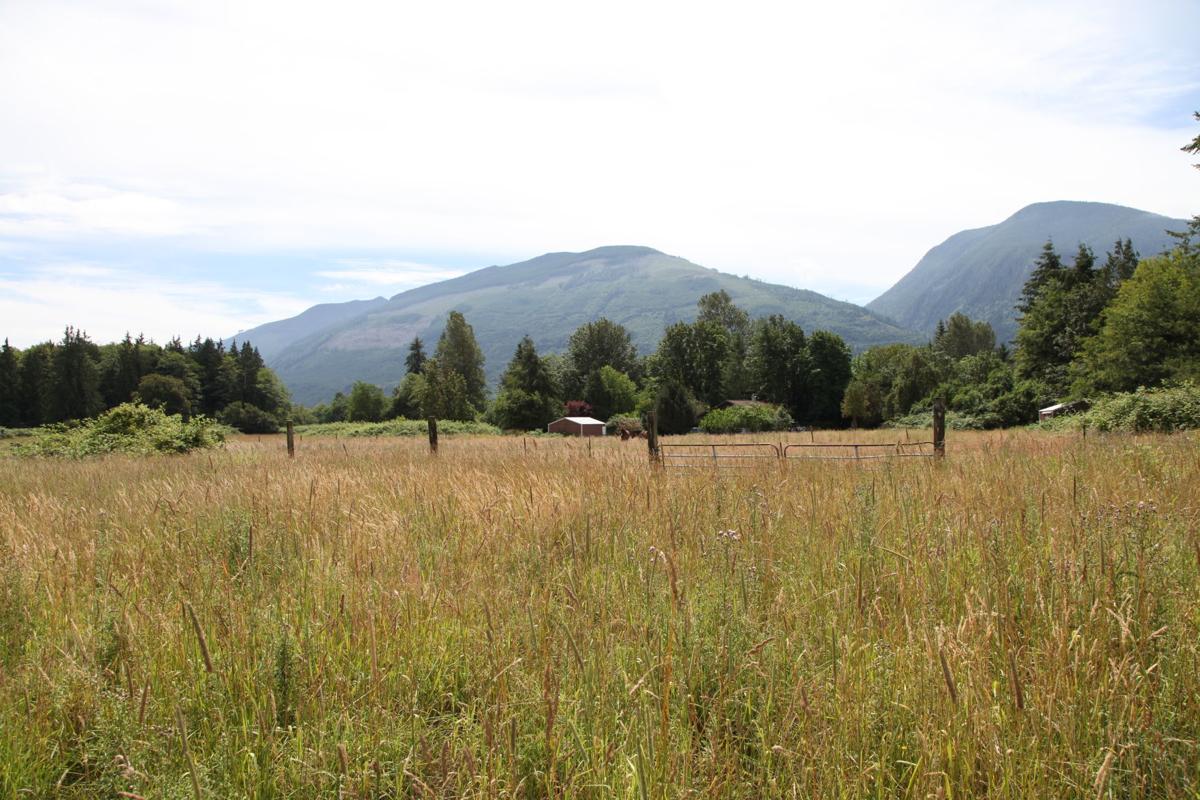 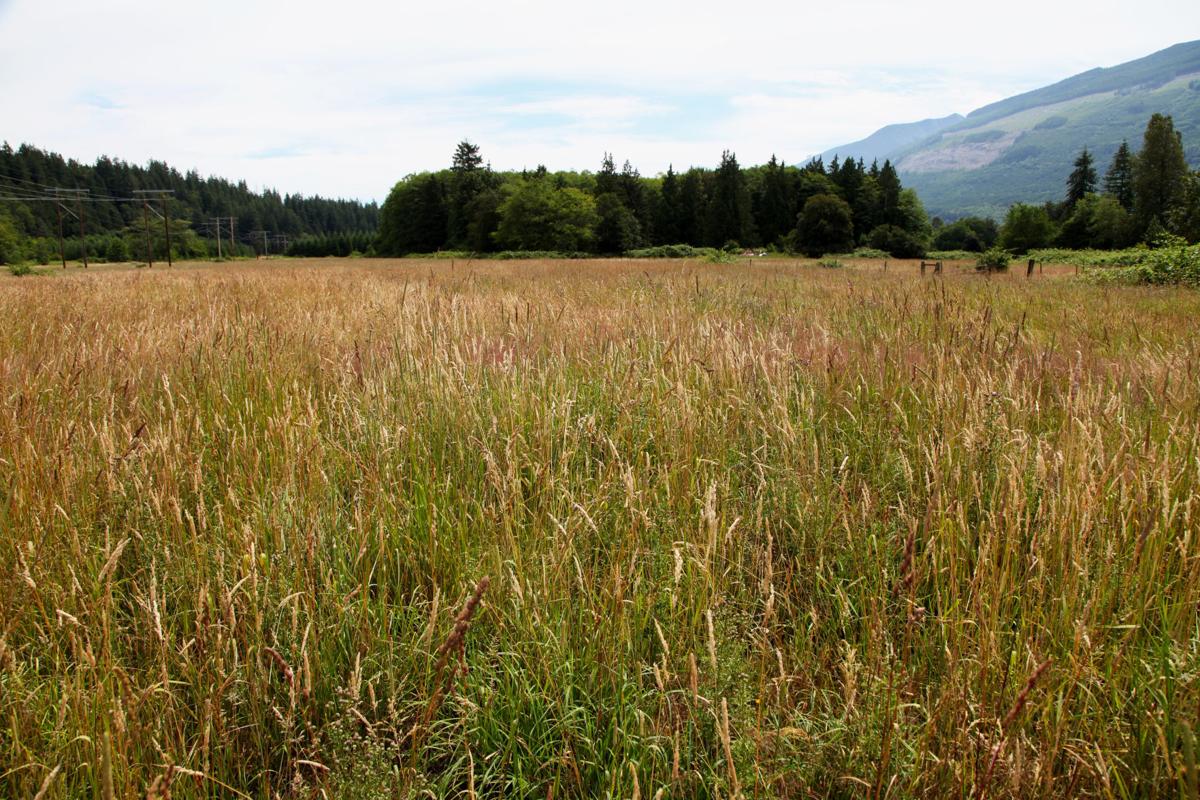 This map shows in yellow where the nonprofit land conservancy Forterra has purchased about 45 acres for residential development aimed at moving, or expanding, the town of Hamilton out of the Skagit River floodplain.

This map shows in yellow where the nonprofit land conservancy Forterra has purchased about 45 acres for residential development aimed at moving, or expanding, the town of Hamilton out of the Skagit River floodplain.

*Corrected 7/11 to reflect Forterra's intent to spend $1 million total toward the project.

HAMILTON — The plan for a bigger, drier Hamilton is finally taking shape.

The Hamilton Town Council voted Tuesday to annex property north of Highway 20 to make way for future development outside the Skagit River floodplain.

The goal is to build an option for people in the small town with a history of significant river flooding to move to higher ground and see their community grow.

The approximately 45 acres of property along Walders Road north of Highway 20 is in the town’s Urban Growth Area and was purchased in March by the Seattle-based nonprofit land conservancy Forterra. Urban Growth Areas are areas designated under the state’s Growth Management Act for future urban development to accommodate anticipated population growth.

The town and Forterra envision using the Walders Road property to build a green development, primarily residential but with the potential for some commercial space, where homes could first be claimed by current town residents wanting to move out of the frequently flooded portion of town south of the highway.

Forterra filed a request May 28 asking the town to annex it. With council approval, the potential annexation now goes to Skagit County.

“If done right, it could realize a community vision ... with retail, affordable housing,” Forterra Vice President of Real Estate Transactions Tobias Levey said during a public hearing Monday about the potential annexation.

The organization bought the property for $650,000, as part of its pledge to contribute $1 million toward the development project, which is meant to help Hamilton residents relocate to higher, drier land.*

Hamilton Mayor Joan Cromley said the project could also help prepare the town for projected population growth, for which there is currently no buildable land within town limits outside the floodplain.

During the public hearing, attended by about 20 community members, several spoke about misunderstandings and fear of residents about being forced from their homes.

“It’s all up to the people that want to go,” Councilman Brian Kirkpatrick told the Skagit Valley Herald. “People are free to stay here (in old Hamilton) or get involved.”

The meeting was held at the Hamilton First Baptist Church. The property where the development is envisioned is across Hamilton Cemetery Road from the church and bordered on the other side by a tree farm.

Two Hamilton Cemetery Road residents raised concerns at the meeting about increased traffic if dozens more homes are built and the impacts to wildlife in the area. Others, including leadership of the church, said they’re looking forward to having more neighbors in the area.

“It will be a benefit to the whole community,” the Rev. Ron Edwards said. “Progress is inevitable, and we hope it can be done in a way that benefits everybody.”

Skagit County Commissioner Lisa Janicki said the project has been a long time coming, as the Janicki family that owns and operates the nearby Punkin Center is aware. That property was annexed into the town in 2008, she said, and at that time town leadership was already interested in annexing more property to make way for homes.

“I think some of our employees would like to have a short commute,” he said. “I’m a big believer in urban, dense development, and most of my millennial employees seem to like it, too.”

Mike Janicki and Forterra board member Linda Neunzig also spoke to the benefits of the project, with an emphasis on the opportunity to move to safer ground.

“I really think you have a tremendous opportunity here to move people in the floodplain out of the floodplain,” said Neunzig, who owns a farm on the Stillaguamish River and has faced six large floods during her 15 years there.

Jane Zillig of the Skagit Land Trust recounted during the hearing her own experience living in Hamilton during floods.

“Our house was raised, so we stayed,” she said of the major flood of 1990. “But I observed a lot of things that were upsetting.”

Among them were oil sheens and trash swept into the river, and dogs tethered while their owners were away and floodwaters crept toward their homes.

“We didn’t stay much longer after those floods,” Zillig said.

Some have had to leave Hamilton altogether.

Ed and Kathy Lipsey, who moved to Lyman after 25 years in Hamilton, are one of several examples of residents the land trust has helped relocate in recent years. Zillig said some would have preferred to stay in Hamilton had an option such as the development the town and Forterra envision been available.

“I don’t think there’s much of a future down there, as much as we love the area,” Zillig said, pointing south of the highway toward her and the Lipseys’ former homes.

Ed Lipsey said his family tried other methods to stay, such as raising their home higher.

“We moved our house up and when it flooded it wasn’t high enough, so we moved it up again,” he said.

Mike Janicki said he doesn’t think lifting homes is a safe answer in territory where the Skagit River may not only flood, but entirely shift its path.

“It wouldn’t have mattered how high those three houses were in Lyman. When the river turned at 90 degrees it just took them out,” he said. “To me, just raising your house is like a hope and a prayer.”

To provide a safer option, Forterra and the town plan to develop the Walders Road property after it’s annexed.

Bringing the property into the town will make it subject to town zoning and development rules.

“The county has different regulations in terms of development; you’re not going to be able to put in dense development ... or even water lines from the town of Hamilton because we’re not supposed to provide water outside of town limits,” Cromley said of the need for annexation.

The property is currently zoned Hamilton Residential, meaning it is intended for an eventual transition to urban development to fulfill the goals of the Hamilton Comprehensive Plan.

“These lands are identified as future additions to the town of Hamilton which will be added to the town through annexation as needed for urban development,” Skagit County’s zoning code states.

Hamilton seeks funding to plan move out of floodplain

After enduring more than a century of flooding, the town of Hamilton is pursuing a vision of a town with drier buildings.

Community reacts to plan to extend Hamilton onto drier ground

In the latest step toward moving the town of Hamilton out of the Skagit River floodplain, the nonprofit Forterra has purchased 40 acres of dry…