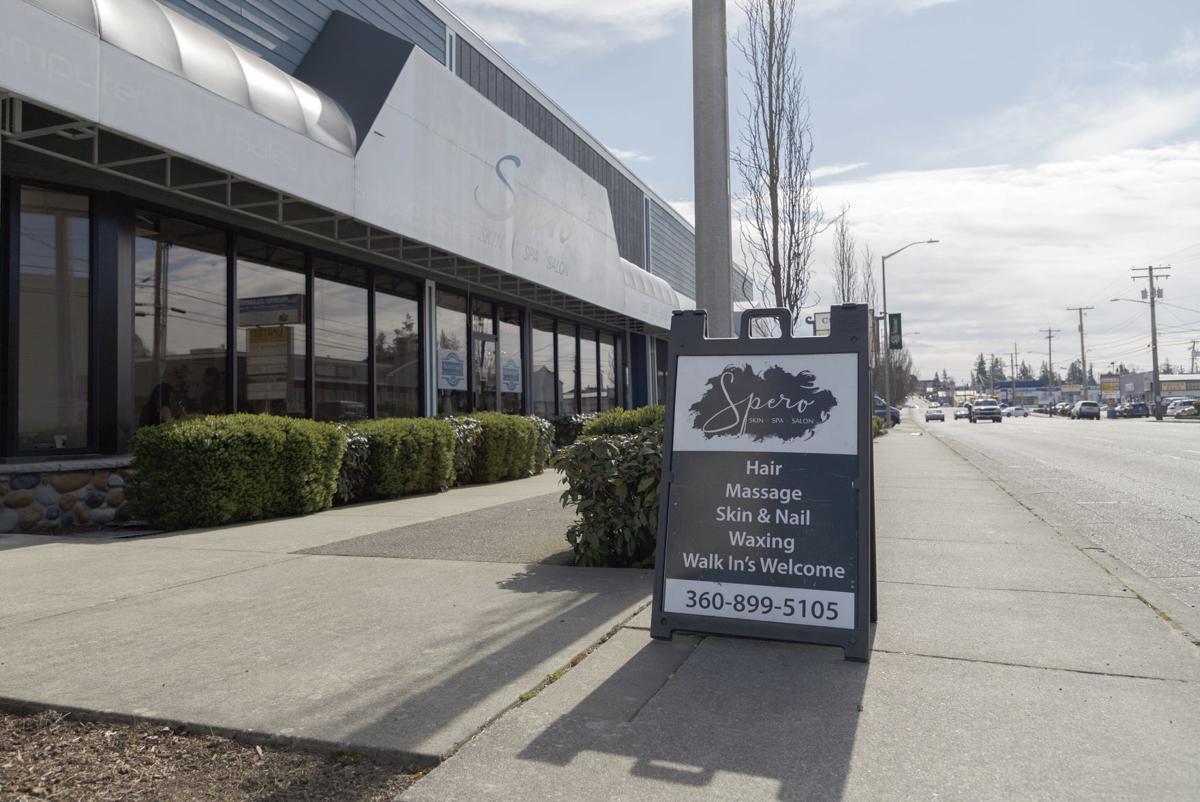 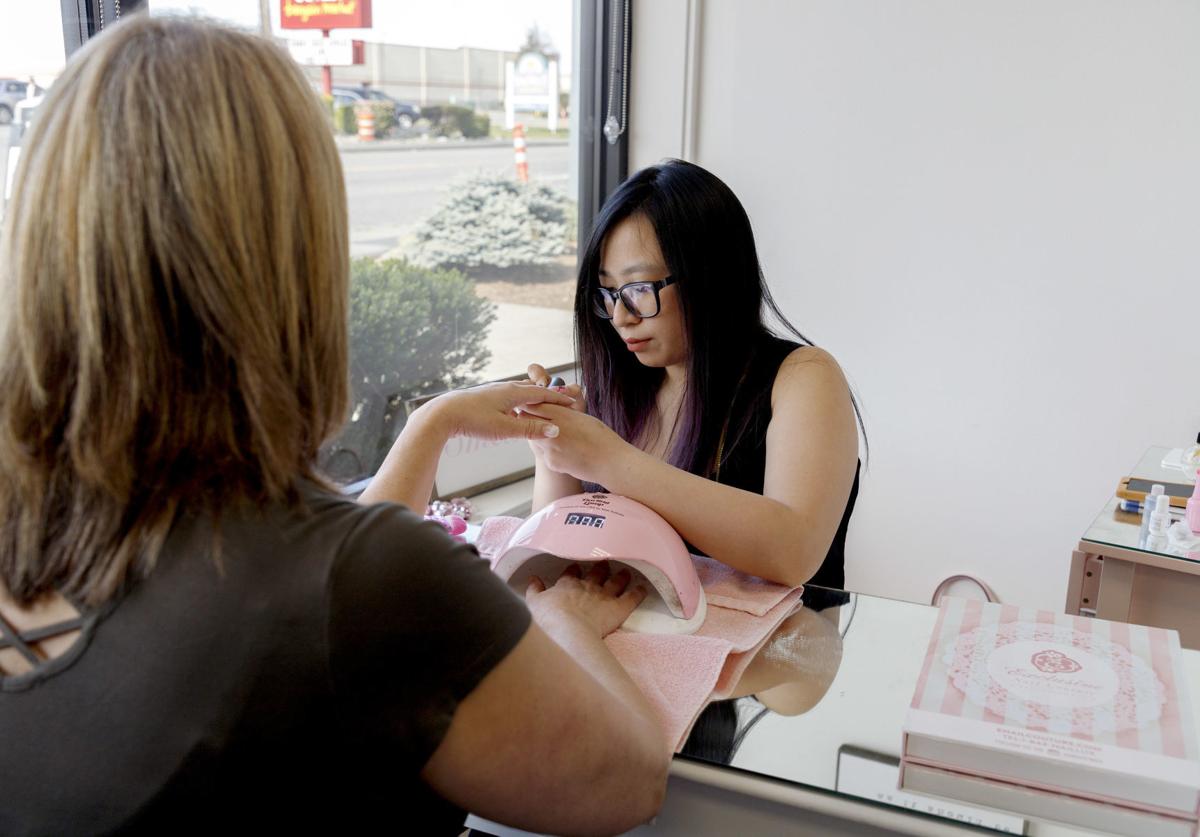 Nail technician Amber Nguyen works on a manicure for a client Saturday at the Spero Skin Spa Salon in Mount Vernon. Owner Tamera Pearson said the business has seen in the past week more cancellations for spa and skin care appointments, compared to other services such as nail care. 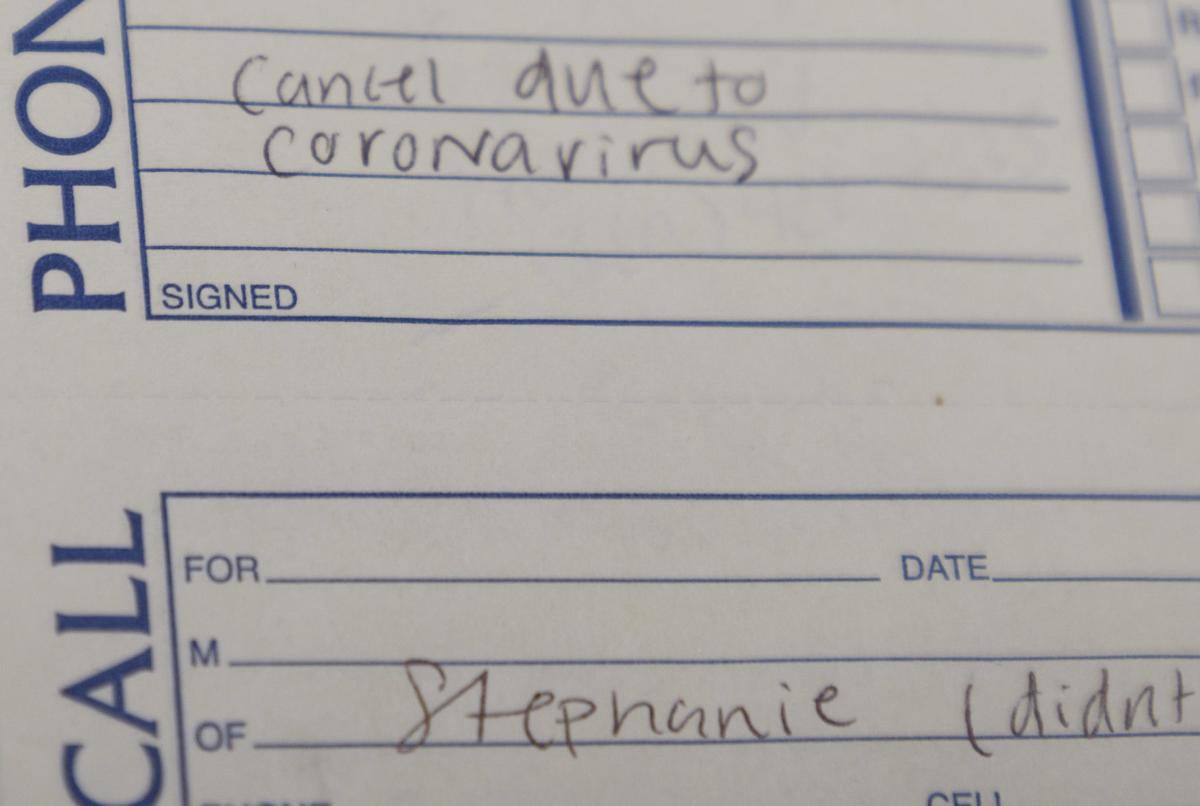 A cancellation note in the schedule of Spero Skin Spa Salon Saturday in Mount Vernon.

Nail technician Amber Nguyen works on a manicure for a client Saturday at the Spero Skin Spa Salon in Mount Vernon. Owner Tamera Pearson said the business has seen in the past week more cancellations for spa and skin care appointments, compared to other services such as nail care.

A cancellation note in the schedule of Spero Skin Spa Salon Saturday in Mount Vernon.

UPDATE: After this story was written, Gov. Jay Inslee announced Sunday night a temporary shutdown of in-person dining at restaurants and bars, and of recreational and entertainment facilities statewide. Take-out and delivery will still be permitted. The ban does not apply to grocery stores and pharmacies, and other retail will have reduced occupancy. In addition, all gatherings of 50 or more are banned, and smaller gatherings are not permitted unless criteria for public health and social distancing are met.

Spero Skin Spa Salon in Mount Vernon recently added 2,000 square feet to its building on Riverside Drive, as business was good and it anticipated the need to grow.

But in the past few weeks — and especially last week — business has noticeably declined, as the novel coronavirus and associated COVID-19 illness spreads. As of Sunday afternoon, there were four confirmed cases in Skagit County.

The business closed early one day last week because so many customers had canceled appointments, she said.

Pearson said she has sent information to customers about the business’ sanitizing procedures and efforts to step them up. She said she has also reminded customers that the spa and salon can help them de-stress during a stressful time, and has offered discounts.

She said she has noticed younger customers seem to be less worried than the older clientele.

On Friday, it was announced that Skagit County schools would be closed from Tuesday through April 24. Anxiety is high over what will happen next.

In Sedro-Woolley, the Sedro 10 Bowling Alley and Deli Chez Café, which has been popular since it opened in January, has had business decline by about 95%, said owner Elianeth Martinez.

Martinez said she has let go of two part-time employees.

“I don’t know how I’m going to operate this week, maybe I’m going to reduce on hours,” she said. “I cannot afford it. I can’t continue to stay open with no (customers). So I have to cut hours.”

She said between each use the bowling alley sanitizes the seats, tables, screens and bowling balls, including inside the finger holes.

Martinez said she would like to be able to take customers’ temperatures at the door, and turn away those with fevers, if it would help others feel more safe.

“Just be cautious each person, take your temperature, be sick and stay home, call the doctor, and that’s it,” she said. “If we are good, we should be able to continue life. You should continue moving.”

Restaurants are also feeling the impacts.

“It’s a sunny day in March, we should be pretty packed,” Meagan Pickett, owner of Chuckanut Manor on Chuckanut Drive, said Saturday afternoon. “We have eight tables full now (out of about 30). This is just crazy.”

She said she’s hopeful customers will return after a few weeks, but is worried about what happens in the meantime.

“Everybody is going to feel it the next couple of weeks, employees are definitely going to get their hours cut for sure,” Pickett said.

“I keep telling myself everyone will be fine, but that little part of me (is scared),” Hayes said. “I have three children. ... And I have nine employees who to have to feed their kids. I’m more worried about them, and ones that live paycheck to paycheck.”

Restaurants have begun offering curbside service, and some offer food delivery through services such as DoorDash, Uber Eats and Munchie Dude.

He said staff has taken greater safety measures, but he’s also been impressed with clients’ thoughtfulness.

“It’s a great thing that people are ... washing their hands, wiping down equipment,” he said. “It’s not just the virus, there’s the flu and everything else. Maybe we’ll gain a better understanding and a better emphasis on the importance of washing hands.”

Em Beals, owner of 5B’s Bakery in Concrete, said employees have been encouraged to stay home if they’re feeling ill. The bakery is closed for a remodel but still delivers baked goods to customers who order online.

She said in an email that businesses such as 5B’s that depend on summer tourism face a crisis.

“Our utmost concern is to the safety and well-being of our employees, while still trying to meet the needs of our customers,” she said. “Not an easy task as we progress through this crisis. I am concerned about our employees, wages, recovery.”

Last week, the state expanded unemployment benefits for those whose jobs are affected by COVID-19. More information can be found at esd.wa.gov/newsroom/covid-19.

Each of the cases has been confirmed in the past week.

Public Health believes community transmission of the illness is occurring in Skagit County.

As of Sunday afternoon, there were 769 positive cases statewide. There have been 42 deaths.

The Economic Development Alliance of Skagit County has compiled a list of resources for business owners and employees impacted by the novel coronavirus pandemic. Information can be found at skagit.org/covid-19-resources-for-businesses-employees