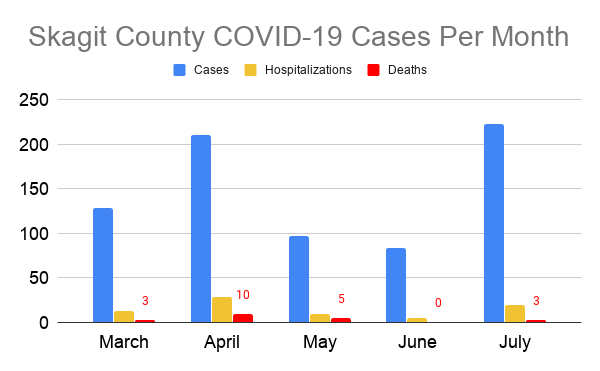 Through Sunday, July had outpaced April for the number of confirmed COVID-19 cases. 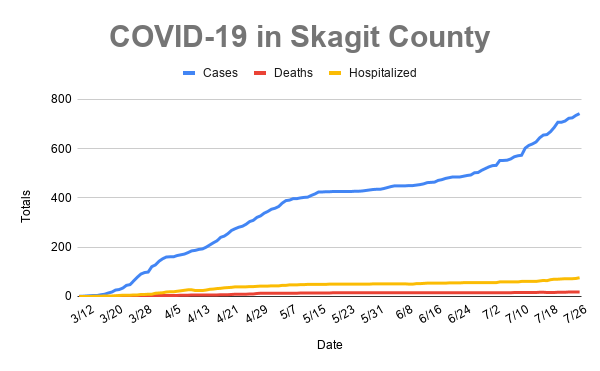 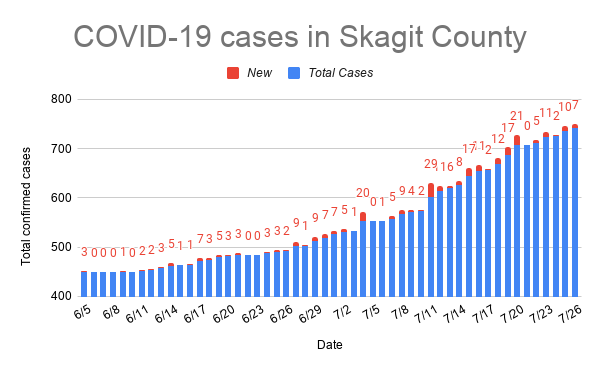 Through Sunday, July had outpaced April for the number of confirmed COVID-19 cases.

MOUNT VERNON — Though several days remain in July, the month has already accounted for the largest number of COVID-19 cases and second largest tally of related hospitalizations in Skagit County.

The increases mean the county has slid back from the possibility of moving into Phase 3 of the state’s Safe Start plan.

“At this point with what we’re seeing and the consistency of what we’re seeing, we are very far (from moving to Phase 3),” Skagit County Public Health Director Jennifer Johnson said Monday during a video conference with local leaders.

She and each of the Skagit County commissioners said continued — and increased — adherence to face mask and distancing requirements, hand washing recommendations, and limits on gatherings is needed to reverse the trend.

“We all really need to do that on behalf of our community ... making sure that everyone is safe,” Johnson said.

Through Monday, Skagit County has had 20 deaths due to COVID-19. The county has also seen 78 treated for the disease in area hospitals.

Skagit County Health Officer Howard Leibrand said Monday that the need for hospitalization has spanned across all age groups, including one 14-year-old who is suffering organ failure because of COVID-19, and an entire family, including several adults and a 5-year-old child, that is currently in care.

“It’s just really important to realize no matter what age you are, this disease can be fatal and can have pretty significant consequences, not just for your older relatives like we’ve been saying for months, but also for yourself,” Leibrand said. “This is not a trivial issue.”

Johnson said of the confirmed cases in Skagit County, the ages of those who have contracted the disease range from less than a year old to 100 years old.

Leibrand said at least one of those currently hospitalized and on a ventilator is in their 20s, and a second in their 30s — highlighting that the disease can turn dangerous at any age.

“That just sort of astounds me,” he said.

County leaders, businesses and residents had hoped to progress quickly from the state’s Phase 2 of reopening — achieved the first week of June — to Phase 3. But with a steady increase in cases through July, meeting the 25 new cases per 100,000 residents over a two-week period is unlikely to happen any time soon.

At the start of this week, Skagit County was at 113 new cases per 100,000 residents. Leibrand said that’s the second-highest of the Northwest Washington counties, close behind Pierce County’s 119.

“It is not going to get anywhere near 25 in the next two to four weeks,” he said.

Since COVID-19 was confirmed in Skagit County in early March, monthly totals have ranged from a low of 84 new cases in June to a high of 210 cases in April.

Given that data, the Skagit County Board of Commissioners unanimously approved Monday a recommendation from Leibrand to cancel or reschedule large community events through the end of 2020.

Leibrand said the move was necessary to protect public health.

“Consider if what you’re doing is essential. Consider if it’s worth, in that moment, doing something that’s risky,” he said. “Let’s make it a local summer and a summer of social distancing. You can still have fun ... but try to do it without exposing yourself and exposing others.”

For county leaders, the desire to move to Phase 3 is taking a backseat to reversing the trend in new cases.

“Getting to Phase 3 is not a political process; it’s about getting the virus at a controllable level, which we are not at,” Johnson said. “We really need everyone to do their part if we want to move to Phase 3, if we want to get our businesses open.”

As of Sunday, Skagit County had confirmed 753 cases of COVID-19, an increase of 11 from the previous day, including 78 who are hospitalized or have been hospitalized and 20 who have died.

A total of 506 people have recovered from the disease.

Skagit County Public Health Director Jennifer Johnson said Mondays are the busiest day of each week and mornings tend to have the longest lineup of cars. Some Monday mornings the wait time has gotten as long as four hours.

Johnson encourages those interested in testing to aim for another day of the week.

It is also recommended that anyone known to have been in contact with a COVID-positive individual wait for a five-to-seven day incubation period to pass before getting tested.

If we continue to allow people to use the excuse of health issues to keep from wearing face masks I don't see how we are going to stamp out the virus. I was at Lowes this evening and saw a gentleman walking around the store not wearing a mask. I had to immediately walk the other way to avoid him. Why do we allow some people from doing their part in the battle with this virus? What's more outrageous, Lowe's offers curbside pickup. These stores should be forcing people who won't or can't wear masks to use these services to keep their customers and employees safe during this pandemic. All it takes is one infected person to make others around them sick.