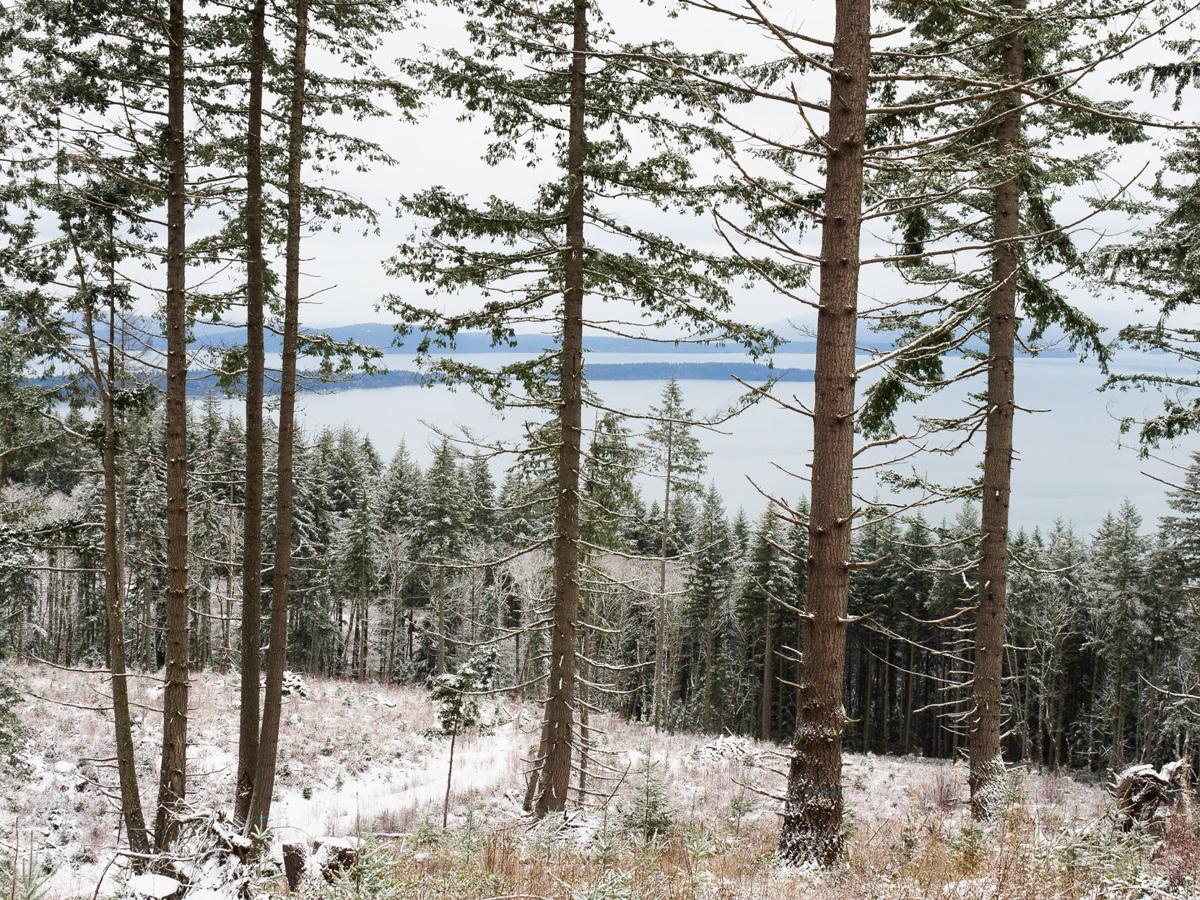 About 84,628 acres of forestland in Skagit County, pictured in red, are managed by the state to produce timber revenue for local schools, county services, fire response, emergency medical services, hospitals, libraries and cemeteries. The timber harvest plan for those lands and others throughout the state are being contested in multiple lawsuits. 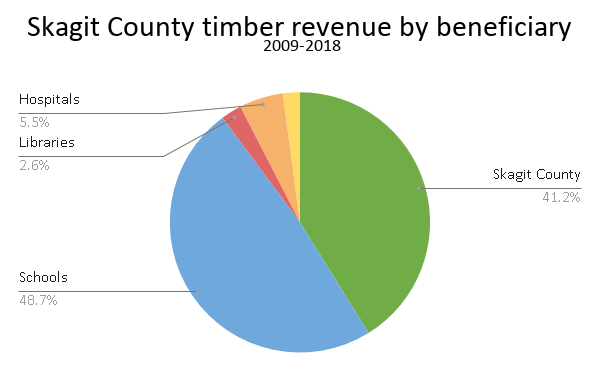 About 84,628 acres of forestland in Skagit County, pictured in red, are managed by the state to produce timber revenue for local schools, county services, fire response, emergency medical services, hospitals, libraries and cemeteries. The timber harvest plan for those lands and others throughout the state are being contested in multiple lawsuits.

Skagit County isn't the only one fighting the state's new plan for timber harvest on forestlands held in trust for counties.

While Skagit County's lawsuit focuses on what's called the sustainable harvest calculation — the method the state Department of Natural Resources uses to plan how much timber to harvest in a 10-year period — the other lawsuits were filed against that plan and a second plan designed to protect a threatened bird species called the marbled murrelet.

"Really there are three sides: There's the environmental community, those concerned about jobs and then the trust beneficiaries ... many of them are going to be in opposite views of each other," said state Superintendent of Public Instruction Chris Reykdal, who sits on the Board of Natural Resources, which governs the state agency.

While the three lawsuits have been filed for different reasons, together they raise questions that include how climate change may influence the state's management of forestlands and whether state-managed county forestlands should be viewed as public land.

Skagit County civil prosecutor Will Honea said while the county respects both environmental and industrial interests, the focus of its lawsuit is on ensuring lands owned by the county are managed properly and that revenue from those lands continues to support junior taxing districts including for county roads, and area schools, hospitals, libraries and cemeteries.

"The real conflict here is that our junior tax districts are facing an unexpected revenue cliff," he said, adding that the county and its junior taxing districts are expecting their timber revenues to be about cut in half under the state's new timber harvest plan. "We are neither siding with the timber industry or the environmental groups, but are striking out on our own to fight for what is best for our community."

Skagit County wants to ensure the trust lands are recognized as belonging to the community, that those lands continue to generate revenue for local taxing districts, and that the state honors the county's commitment to keeping sustainable forestry a part of the local economy.

"This land is Skagit County’s, this community’s, for our benefit. It is not public land like national park land belonging to all the people," Honea said.

Natural Resources says in putting together the two plans it worked to balance its responsibility to trust beneficiaries with state and federal laws regarding environmental protections.

For the sustainable harvest calculation, which Skagit County is asking the court to invalidate, Natural Resources considered six alternatives that ranged from harvesting 384 million to 550 million board feet over the course of the 10-year cycle. The plan it selected was for 465 million board feet.

Reykdal, who found himself quoted in two of the three lawsuits, said he shares concerns with each group.

He wants to see the state mitigate climate change impacts, continue to be home to a viable timber industry and be able to provide long-term financial support to trust beneficiaries.

"If we don't manage our forests (for climate change), the damage they will sustain from fires and other results will actually seriously harm the beneficiaries down the line," Reykdal said.

The lawsuit filed in King County asserts that trust lands, including those Natural Resources manages on behalf of Skagit County, are public lands and should be managed "for all the people."

The court document states that because of a shift in social values that has led to forests being recognized for their environmental and recreational significance, as well as the growing threat of climate change, the trust-for-revenue model is outdated.

“Today, these assets represent so much more than just revenue to the named trusts. Our forests store carbon to offset climate change, provide clean water, support fish and wildlife, and foster outdoor recreation and tourism," Conservation Northwest Executive Director Mitch Friedman said in a news release. "The question is whether the law requires the state to hold trust funding over these and other public values.”

Conservation Northwest and the Washington Environmental Council are joined in the lawsuit by the Olympic Forest Coalition and eight individuals who live near and recreate in state forests, including an accomplished environmental scientist who has worked in and taught forestry.

"We see this as a question about how to sustainably manage our state forests for the public good ... It's not specific to the marbled murrelet or other species or counties. It's about making the most of our state forests for all Washingtonians," Conservation Northwest Communications Director Chase Gunnell said. "Particularly with climate change, there are a lot of different factors to consider today that we didn't think about when the system was established 100 years ago that we need to bring into it now in the 21st century."

The American Forest Resource Council, which locally represents Sierra Pacific Industries, and others argue in their lawsuit that the new timber harvest plans threaten businesses and jobs throughout the region.

The plans will "significantly reduce timber supply for forest products manufacturers who are a mainstay for rural economies," states the lawsuit, which also involves the Concrete School District. "The timber industry remains the economic foundation of much of rural Western Washington, and the industry provides family-wage employment to foresters, loggers, truck drivers, mill workers, and others."

According to a news release from the American Forest Resource Council, the planned reduction in timber harvest on trust lands will mean about $30 million less each year in forest product revenues that support hundreds of jobs.

Representatives of Sierra Pacific, which operates a lumber mill off Highway 20 west of Burlington, said thanks to its ability to source timber from other types of forestlands, its 210 employees should be safe.

But if the company isn't contracting with loggers and trucking companies to get Skagit County trees to market, there will be a trickle-down effect on other local jobs.

"About three other jobs are supported by each job at the mill, including those in logging, trucking and doing the re-planting," Sierra Pacific Industries Community Relations Manager Lisa Perry said.

"Aside from the direct timber harvest money, it's also taking away jobs in our communities," he said.

Some aren't surprised at the emerging legal fight over the changes Natural Resources has made, particularly in reducing its 10-year harvest plan by 132 million board feet from the previous one.

"This is much larger than Skagit County and has statewide implications," Honea said.

But the focus of the county's lawsuit is on the impacts to local schools, libraries, road projects and other services.

Timber harvest on the 84,628 acres of trust lands in Skagit County brought in about $76.4 million in revenue to local taxing districts between 2009 and 2018, according to county records.

"It’s a lot of money for a rural place," Honea said. "The gist of this lawsuit is: we need a plan to replace this revenue and we need respect for our community’s opinion that we need to keep sustainable forestry around."

Where the money goes