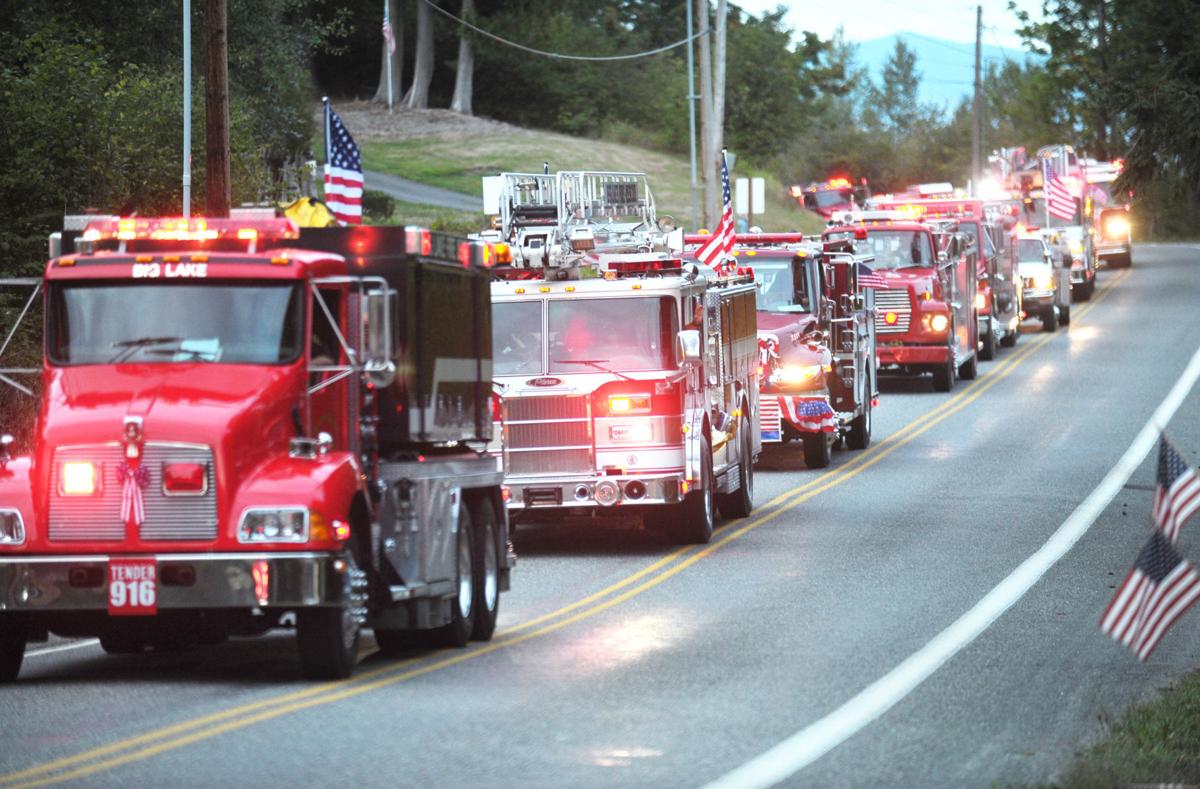 Fire vehicles from departments throughout the area participate Wednesday in an annual procession around Big Lake. 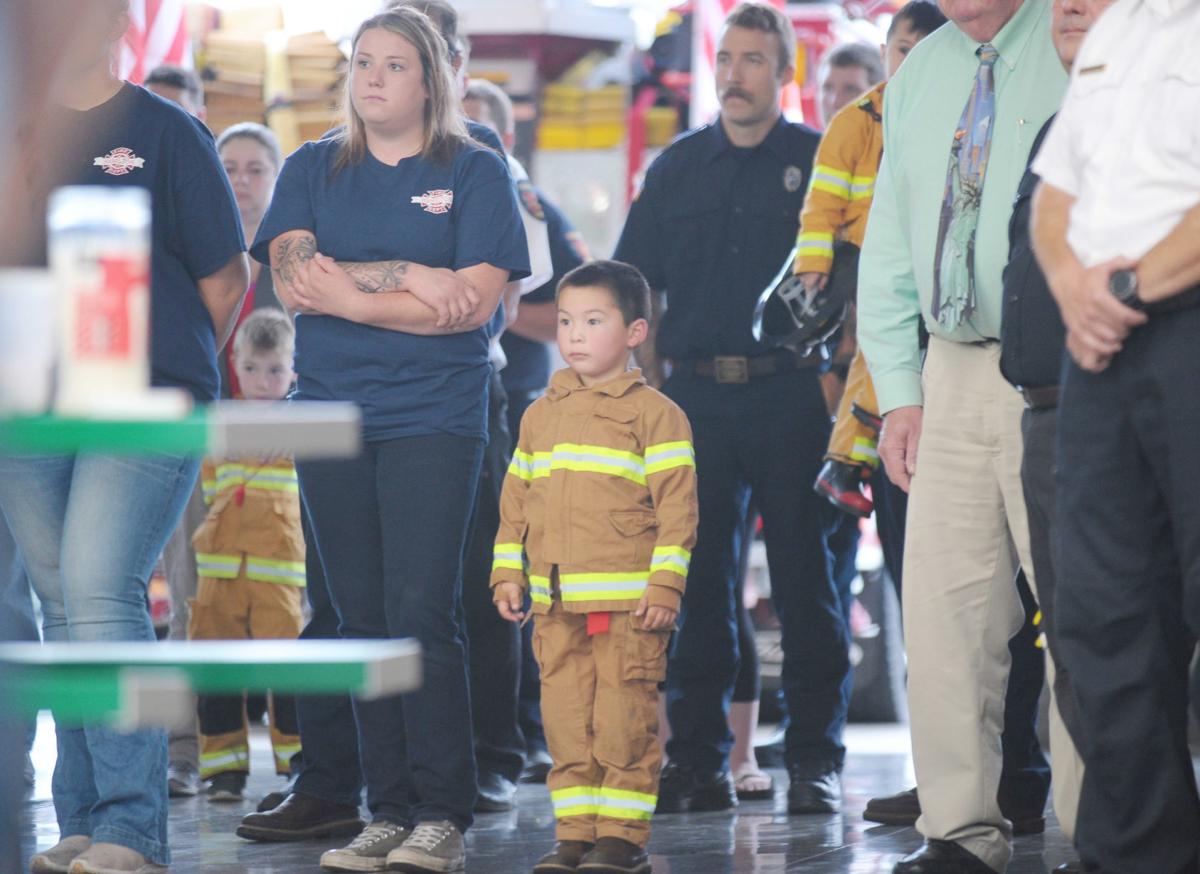 Weston Olson, 5, stands at attention in his bunker gear while listening to chaplain Dennis Spinnie speak. 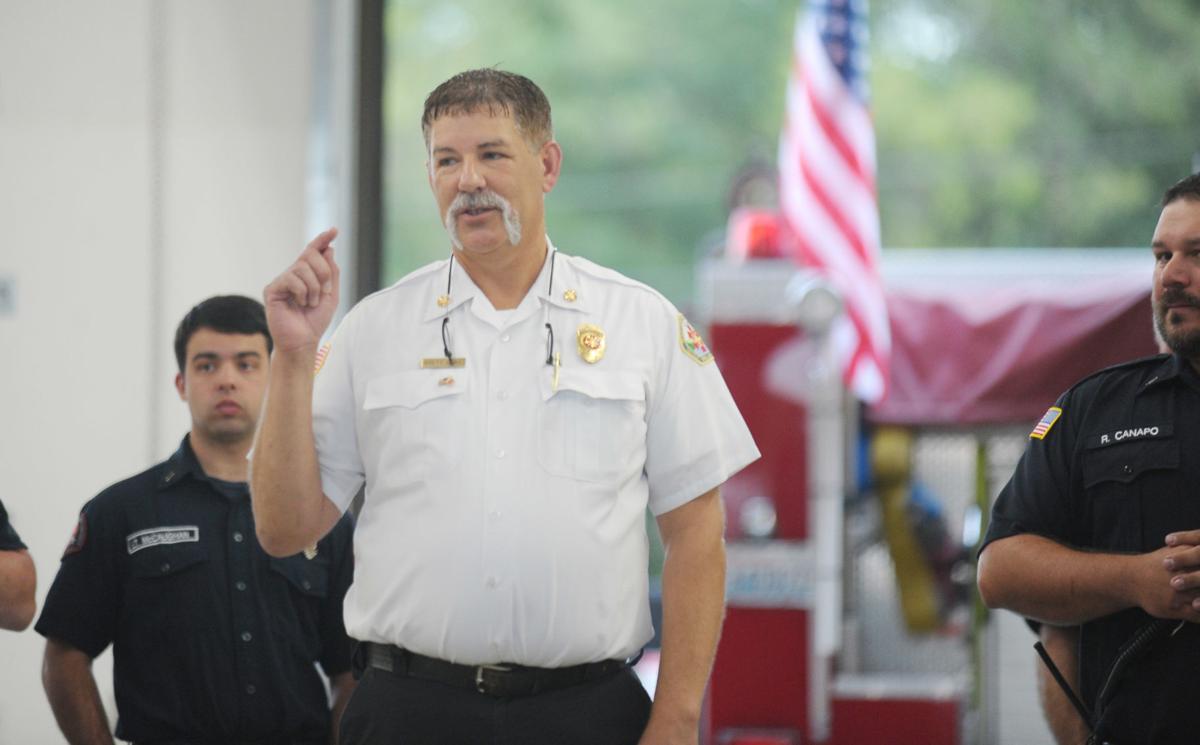 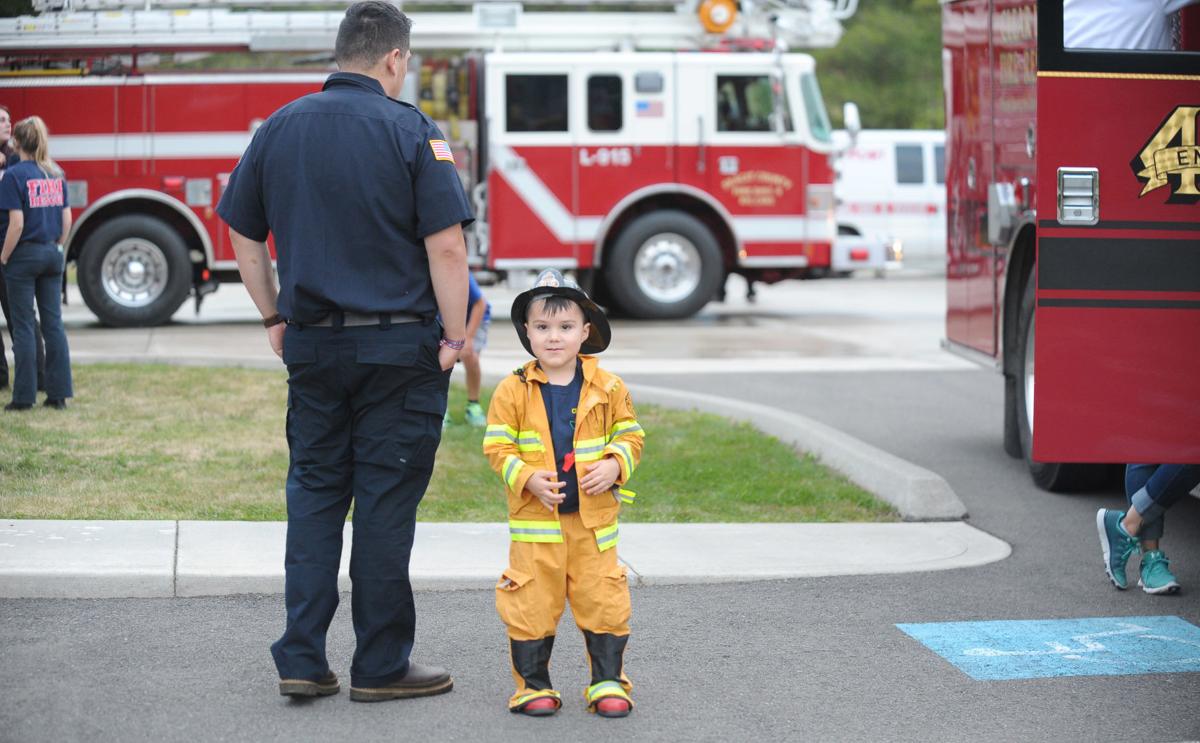 A boy in bunker gear stands with his dad outside the Big Lake Fire Station before the annual 9/11 procession around Big Lake. 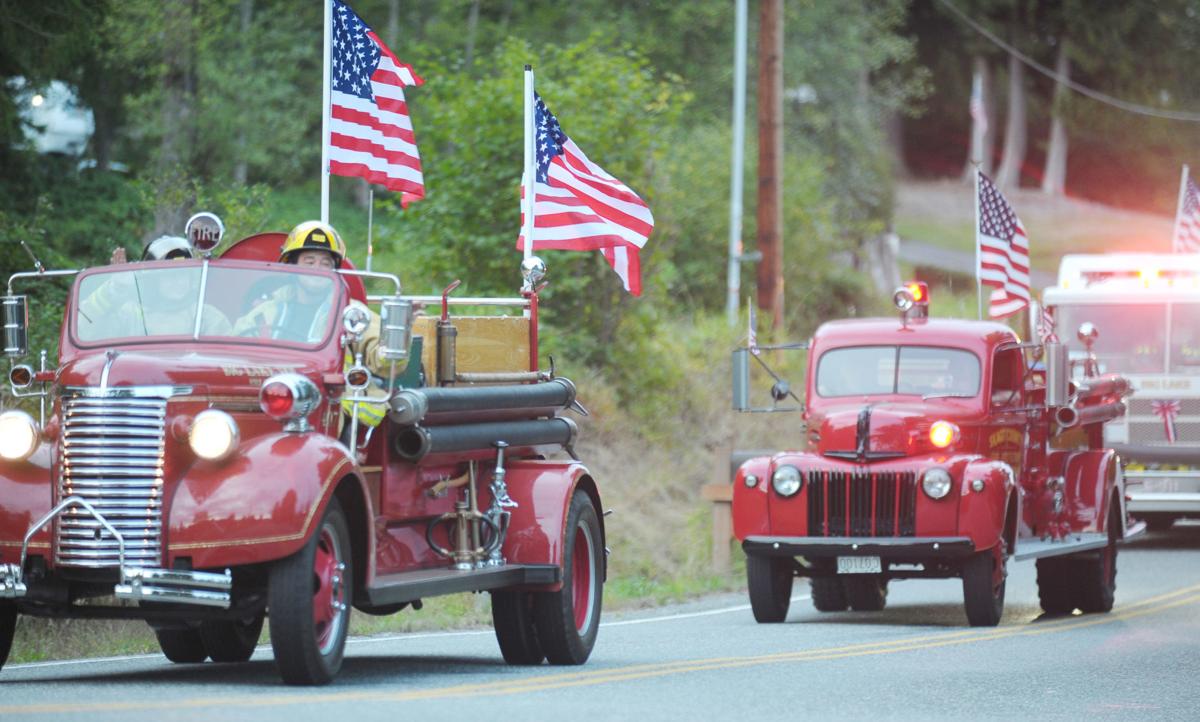 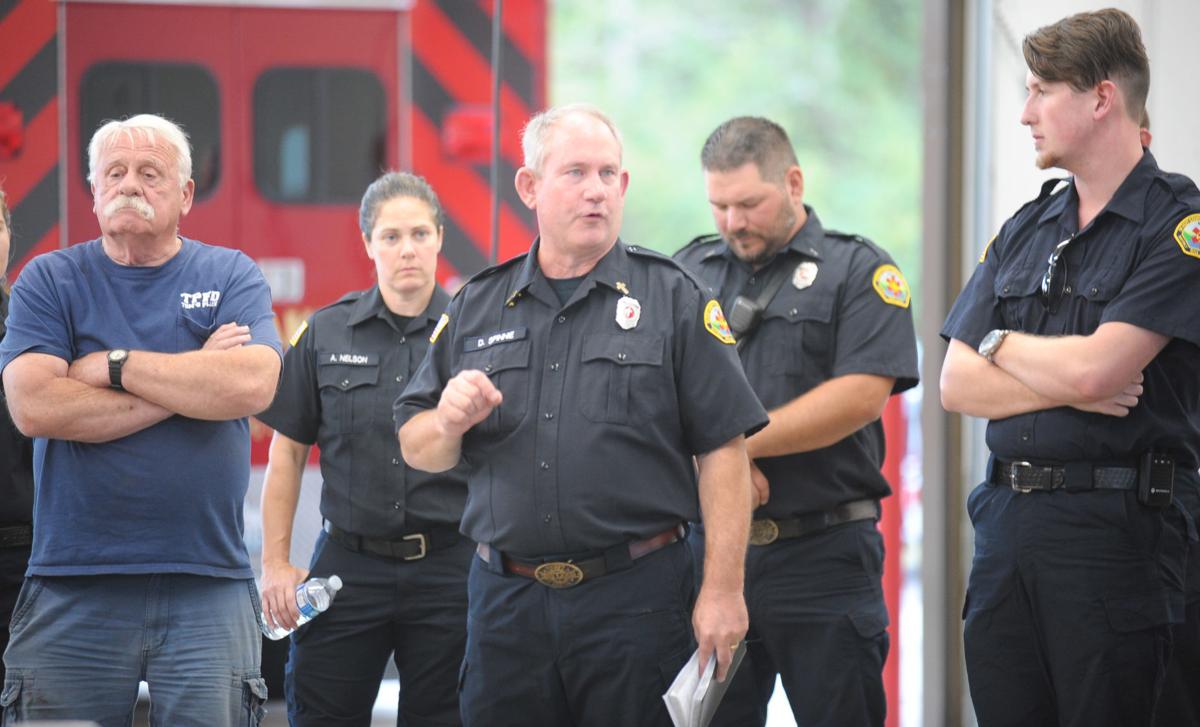 Fire vehicles from departments throughout the area participate Wednesday in an annual procession around Big Lake.

Weston Olson, 5, stands at attention in his bunker gear while listening to chaplain Dennis Spinnie speak.

A boy in bunker gear stands with his dad outside the Big Lake Fire Station before the annual 9/11 procession around Big Lake.

BIG LAKE — For the past 18 years, dozens of fire department vehicles have left the Big Lake Fire Department at 7 p.m. on Sept. 11 with their sirens on and their lights flashing.

They aren’t responding to a particular call, but instead are honoring the lives of the nearly 3,000 people — including 343 firefighters — who were killed in the Sept. 11, 2001, terror attacks in New York City.

“We remember those who rushed in, as everyone else was rushing out,” said Big Lake Fire Department chaplain Dennis Spinnie of the Big Lake Church of the Nazarene. “We are all human beings, (firefighters) just have a different calling: to go in while everyone else is going out.”

The procession has become a tradition in Big Lake, with fire departments from throughout the region participating.

“We started the parade to help honor the men and women who lost their lives during the attacks,” Big Lake Fire Chief Brett Berg said. “Also, our firefighters were feeling helpless during the 9/11 attacks. What could we do from Washington state to honor those New York firefighters?”

The parade has grown every year, he said. This year, about 30 fire vehicles from departments throughout Skagit and Snohomish counties participated, Berg said.

“Our goal was to get as many trucks as we could,” Berg said.

Berg said his ultimate goal is to have trucks still leaving the station while others are returning after having completed a procession around the lake.

“I think people forget that firefighters and police (have) a dangerous job,” Berg said. “One moment, those engine crews were having breakfast and the next minute they’re down the block at the (World) Trade Center. I hope America never forgets and never quits on the men and women in those buildings that tragic day.”

Each year, people in Big Lake line the streets to greet the passing fire vehicles, many with candles and American flags.

“I think it’s important we honor our first responders,” said Stein Svendsen, who watched the procession with his wife Jana and two grandchildren.

While the Svendsens’ grandchildren, Anders, 10, and Keely, 8, weren’t even born by 9/11, it’s still important they know of the sacrifices made that day, particularly by first responders, Jana Svendsen said.

“They’re the ones we count on every day,” Svendsen said. “And we certainly did that day.”