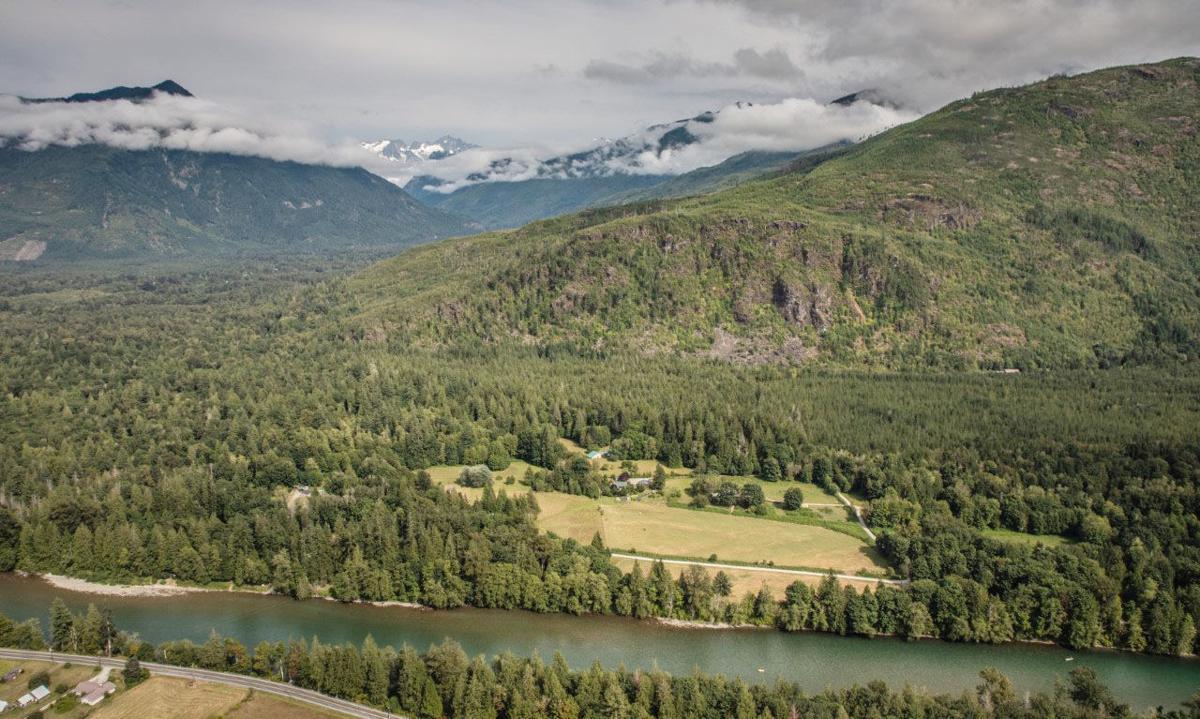 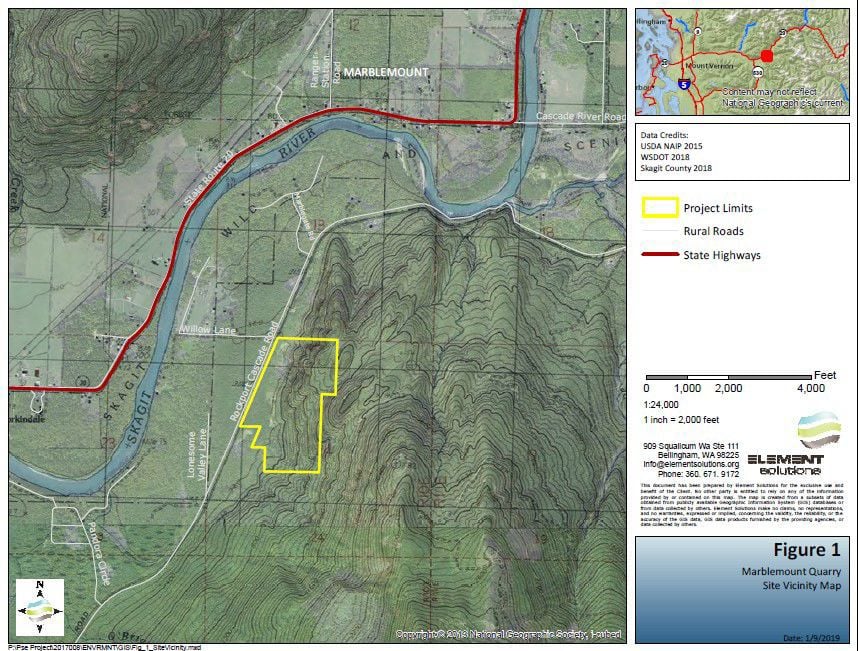 Kiewit Infrastructure Co. had proposed establishing a mine on 79 acres near Marblemount. 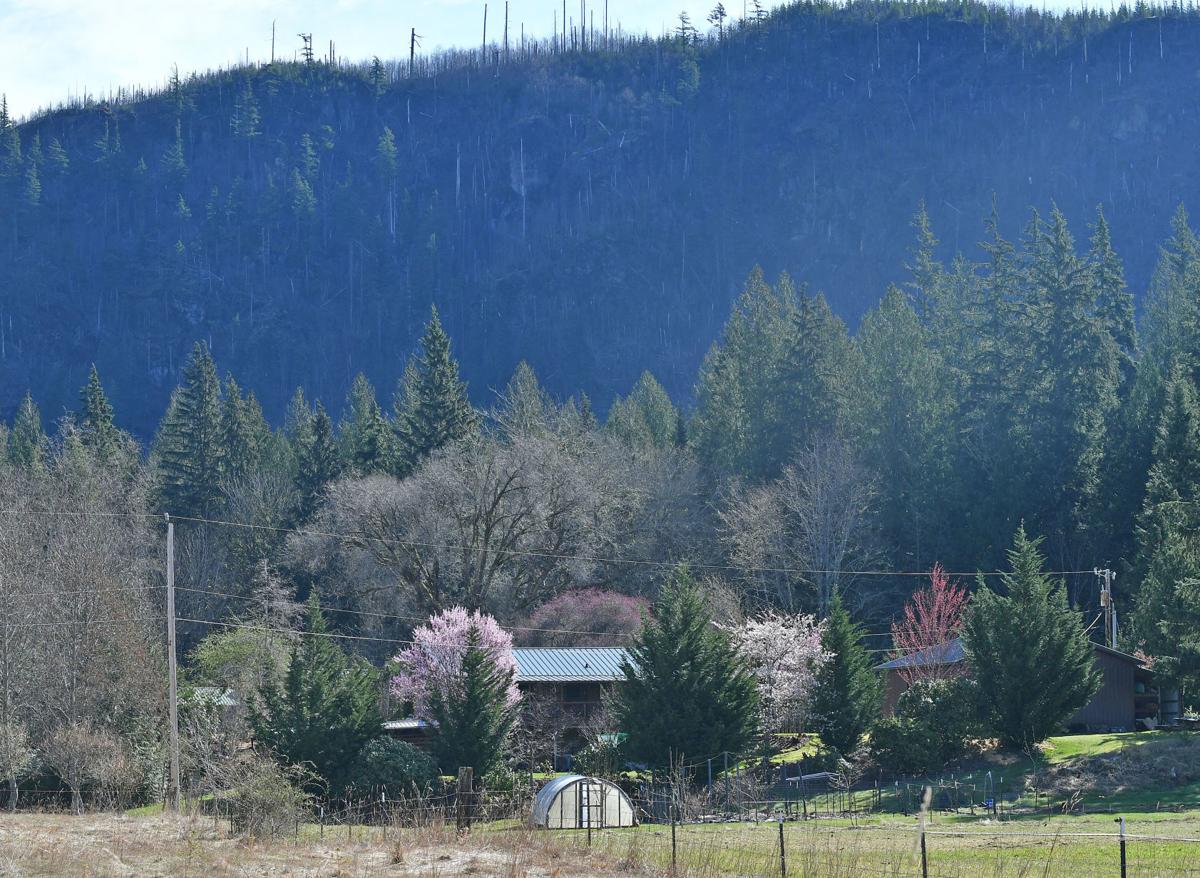 A home near Rockport Cascade Road is one of several near the base of a hill that Kiewit Infrastructure Co. had planned to mine.

Kiewit Infrastructure Co. had proposed establishing a mine on 79 acres near Marblemount.

A home near Rockport Cascade Road is one of several near the base of a hill that Kiewit Infrastructure Co. had planned to mine.

MARBLEMOUNT — The company seeking to establish a rock mine in the Marblemount area has called off the project.

In a Sept. 6 letter to Skagit County Planning and Development Services, Kiewit Infrastructure Co. said it is withdrawing its applications for permits to establish a 79-acre mine to supply large rock for jetty stabilization at the mouth of the Columbia River.

Kiewit’s withdrawal of permit applications follows a U.S. Army Corps of Engineers Aug. 30 decision to hire J.E. McAmis, Inc., of Chico, California, to supply the jetty rock for its project planned for 2019-2023.

The withdrawal comes before Skagit County completed its evaluation of the project under the state Environmental Policy Act, or SEPA, including a review of hundreds of public comments and deciding whether to require an environmental impact statement, or EIS, to review potential impacts of the project.

The county has now halted its work on the project and is working with lawyers to figure out the appropriate next steps under SEPA.

“We were collecting data, collecting information and conferring with the tribes,” Skagit County Planning and Development Director Hal Hart said of the work leading up to receiving Kiewit’s letter Monday. “That is now on hold and we’re working with our attorneys (to figure out what’s next).”

Some comments the county received about the project came from area residents who sounded the alarm early in 2019 over the proposed mine’s proximity to their homes and the Skagit River, and in April formed a nonprofit called Skagit River Alliance.

“Mid-March we saw a little tiny sign on a driveway on Rockport Cascade Road that there was a company called Kiewit that had applied to do this massive mine project with a 100-year permit, and nobody knew anything about that,” resident Kathy Young said.

Following that day, she and her husband Michiel Young launched an effort to alert neighbors and those with an interest in protecting the Skagit River. As interest grew, the couple founded the alliance.

Michiel Young said about 150 community members filed into the Marblemount Community Hall one day to discuss concerns about the proposed mine, and about 50 attended the nonprofit’s first event — both large turnouts for a rural area such as Marblemount.

“It was a great community effort,” Kathy Young said.

Because Kiewit’s Sept. 6 letter doesn’t cite a reason for withdrawing its permit applications and company representatives did not respond to requests for comment, it’s unclear why the company abandoned the project.

The law firm Chmelik Sitkin & Davis of Bellingham, which sent the letter on behalf of Kiewit, also did not respond to requests for comment.

Regardless of the reason, residents who live near the proposed mine site are relieved.

“People say they can finally sleep at night,” Skagit River Alliance President Jose Vila said. “Overwhelmingly, people are very relieved and very happy that this thing has gone away.”

Kathy Young said that for months she felt opposing Kiewit was like David fighting Goliath.

“Now that they’ve actually withdrawn their permit applications, a huge weight is off my shoulders,” she said. “I can enjoy living here again ... It’s beautiful and peaceful and I’m not so worried anymore.”

The Youngs and others opposed to the mine were hoping to see Skagit County require an EIS to weigh the potential impacts of the project.

“There’s many different reasons why we called for an environmental impact statement, all about the water and the safety, to the wildlife, and to people,” Kathy Young said.

Kiewit, on the other hand, made it clear it did not want the county to require an EIS.

“An EIS would provide no additional substantive technical information that Kiewit has not already provided or will provide,” the law firm representing Kiewit wrote in a July 3 letter to Skagit County.

The letter asked that the county provide advanced notice of any issues that might require a determination of significance so that the company could clarify its project materials or conduct additional studies to address those issues.

It’s unclear what Kiewit will do with the 522 acres it purchased in February to establish the mine.

Though the mine project has been called off, members of the new Skagit River Alliance said they are prepared to continue defending the environment and the residents of the Skagit Valley.

“When we formed the alliance our goal was to protect and preserve the Skagit River and the communities around it, so we’re going to continue on with that,” Michiel Young said.

Concerns are mounting about a proposed rock mine about a half-mile from the Skagit River near Marblemount.

Marblemount mine project called off