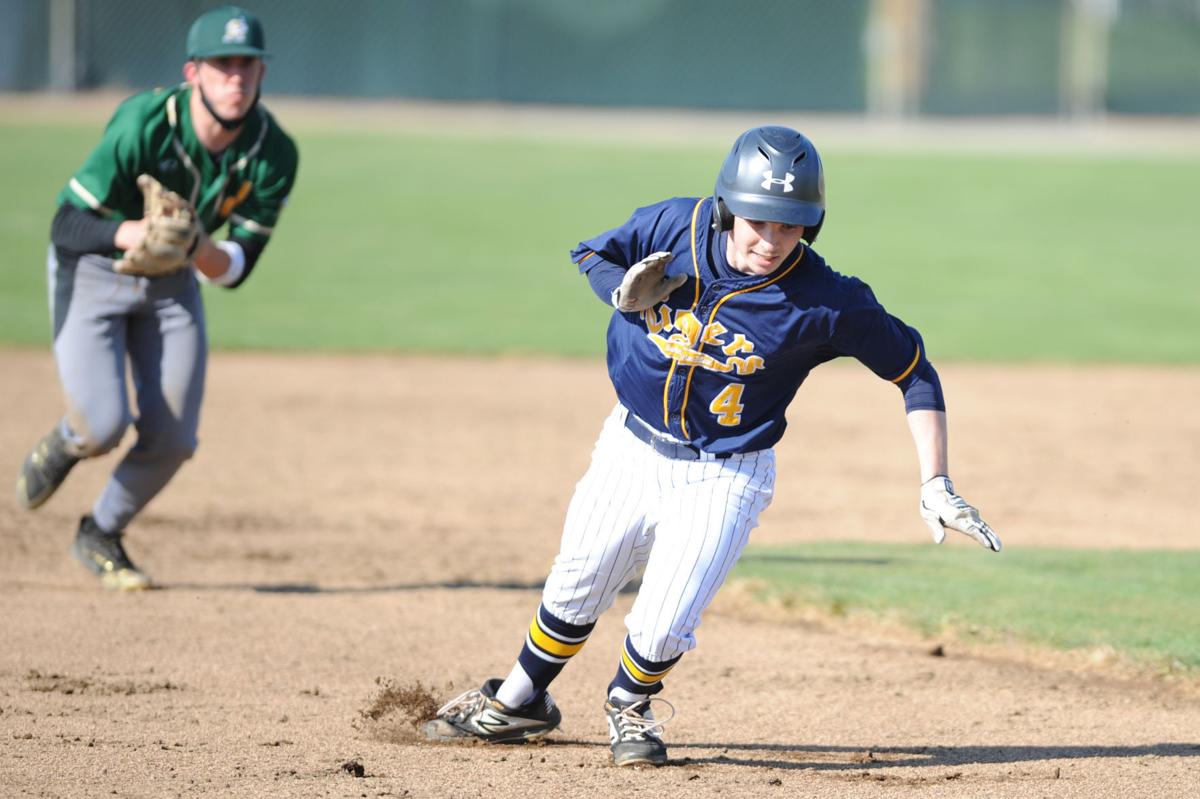 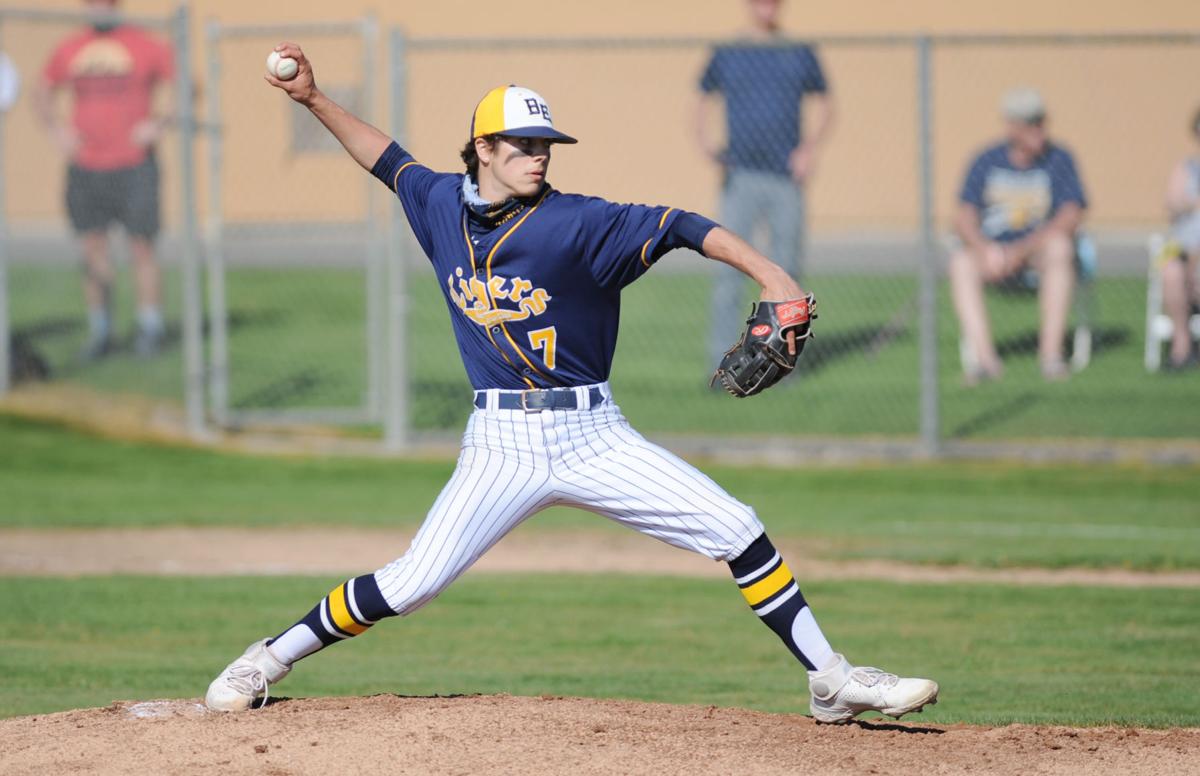 Burlington-Edison pitcher Will Watson delivers to the plate Monday against Sehome in Burlington. 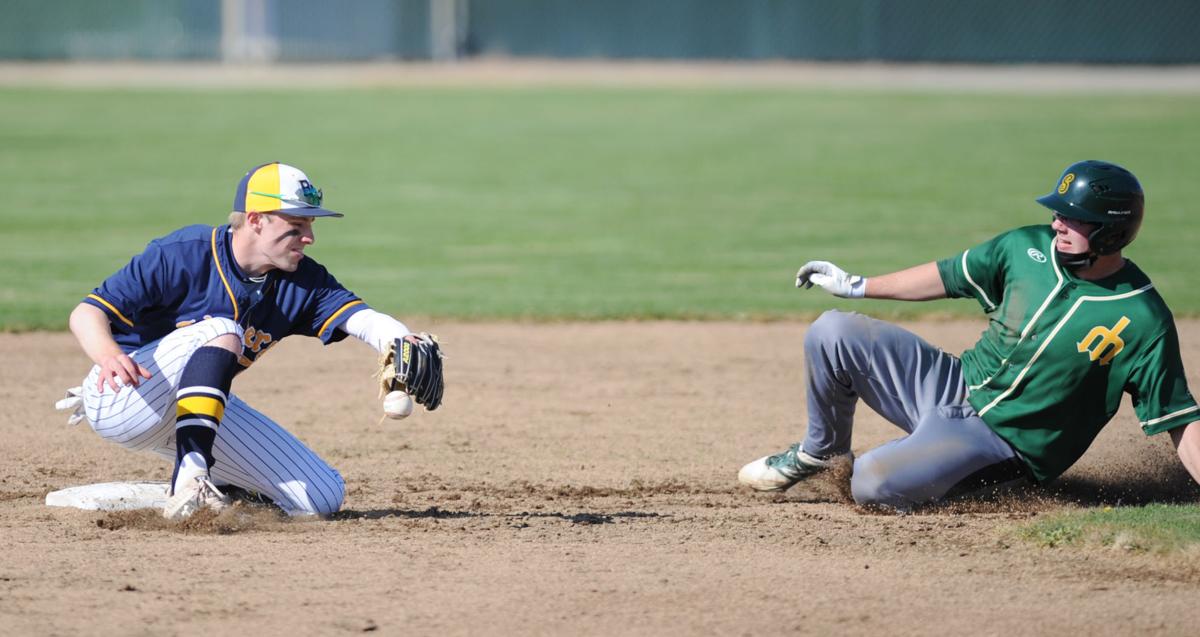 Burlington-Edison second baseman Will Corcoran can't handle a throw Monday on a stolen base attempt by Sehome's Graham Glendening in Burlington. 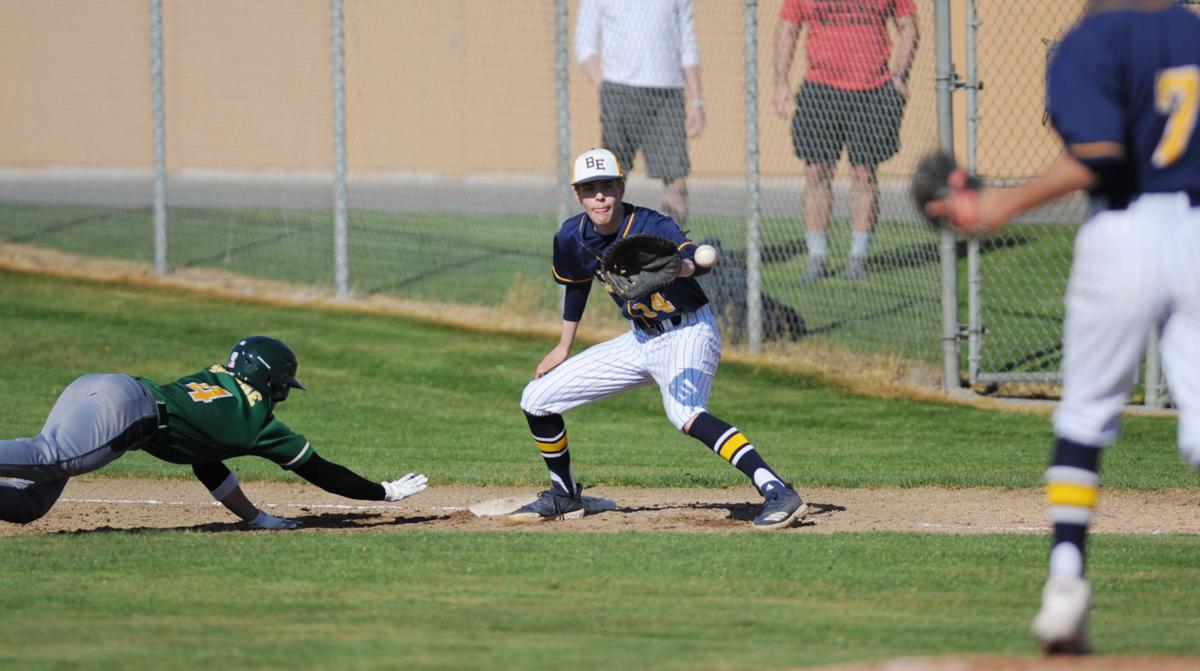 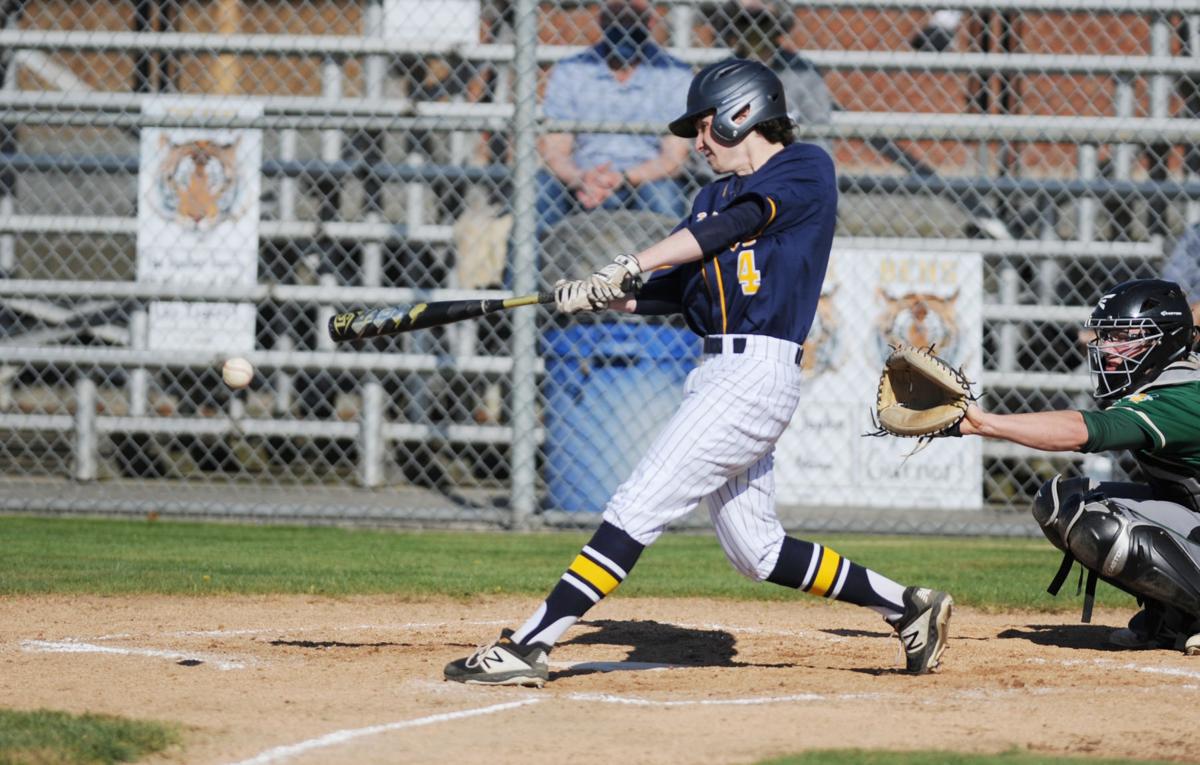 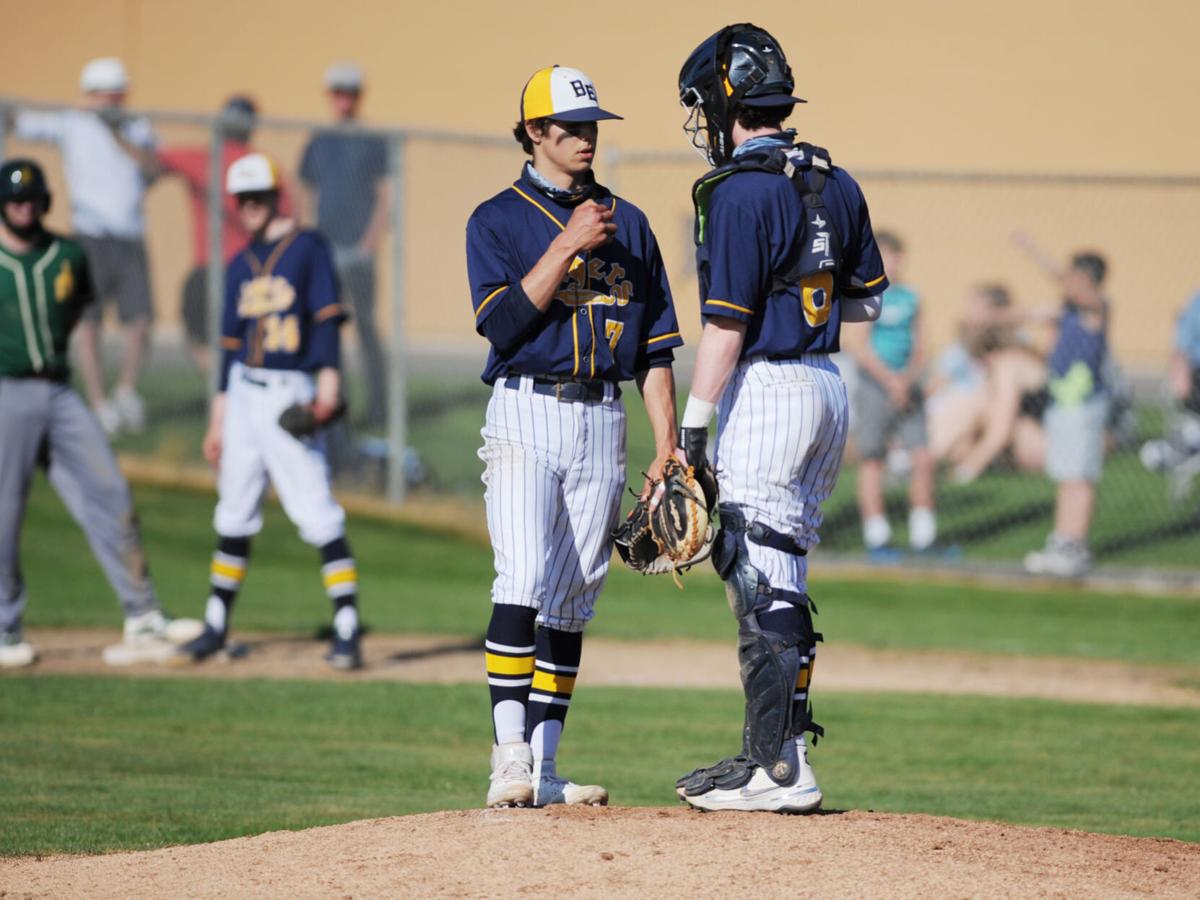 Burlington-Edison pitcher Will Watson delivers to the plate Monday against Sehome in Burlington.

Burlington-Edison second baseman Will Corcoran can't handle a throw Monday on a stolen base attempt by Sehome's Graham Glendening in Burlington.

BURLINGTON — Pitchers Will Watson and Ryan Crawford combined on a gem Monday for the Burlington-Edison High School baseball team.

Watson struck out 11 batters in 5 2/3 innings and Crawford allowed only one hit in 1 1/3 innings of relief as the Tigers shut out Sehome 1-0.

The victory was the fourth in a row for the Tigers (4-2).

Watson scored the game's only run on a wild pitch. He'd singled, then advanced to third on a single from Josh Fox.

Both teams had three hits.

BELLINGHAM — A nine-run first inning boosted the Bulldogs to their first win of the season.

Trey Devery struck out three and walked one over five innings on his way to the victory.

ANACORTES — The Cubs got the road win and improved to 5-1.

"He did a great job for us on the hill," Cubs coach Rob Davie said. "All his pitches were working ... He has had a sore arm, so we rested him. He came out and threw the best game I have seen him throw."

Friedrichs was also 1-for-4 from the plate, including a two-run blast that cleared the fence in the third inning.

FERNDALE — The Bulldogs scored 53 seconds into the game, and didn't let up from there.

LYNDEN — Junior Maturana scored an early goal for the Tigers off an Agustin Guillen assist, but the Lions' pressure proved too much to handle in the road loss for Burlington-Edison (2-2).

"We maintained a possession advantage throughout the game, but Lynden kept pressuring with hard, physical play. They showed real determination — credit to their players and coaches," Tigers coach Ben MacKay said.

SEDRO-WOOLLEY — Sedro-Woolley threw an early scare into undefeated Squalicum as the Cubs carried a 1-0 lead into halftime before the Storm pulled away.

Leo Valdez Ramon scored for the Cubs (1-4) off a hard-struck free kick just under the cross bar from about 27 yards in the 16th minute.

"We fought like I have never seen these boys fight. I couldn't be more proud of every person on this team," she said.

BELLINGHAM — The Mariners proved tough at home with the shutout to send the Seahawks to 1-3.

MOUNT VERNON — Olivia Collins struck out nine batters on her way to the win and hit a three-run home run to power the Bulldogs.

"We gave them a lot of extra chances with errors, and they did a great job of capitalizing on those mistakes. We were fortunate to be able to hang on and come away with the victory," Bulldogs coach Robert Cyr said.

Collins was 2-for-4 for the Bulldogs (2-3), Charlotte Malcolm was 2-for-3 and Ashlyn Stroud had two RBI.

ANACORTES — The Seahawks toppled the Cubs in the matchup of Skagit County teams.

"We have a lot of good senior leadership which is giving us some stability with so many underclassman on the team who have little to no playing experience," Seahawks coach Elaina Meyers said.

"Lauren Anderson had the best match of the season so far," Cubs coach Janine Van Liew said. "Addie and Lily played some smart tennis against some tough opponents."

MOUNT VERNON — No. 2 singles player Sadie Lee battled back from an opening set loss to win the second set in a 7-6 tie-breaker and the third set in a 10-7 tie-breaker for the Bulldogs’ lone win.

"Sadie was able to carve out more control during the second set, moving the Lynden player around the court to force errors," said Mount Vernon coach Ellen Gray.