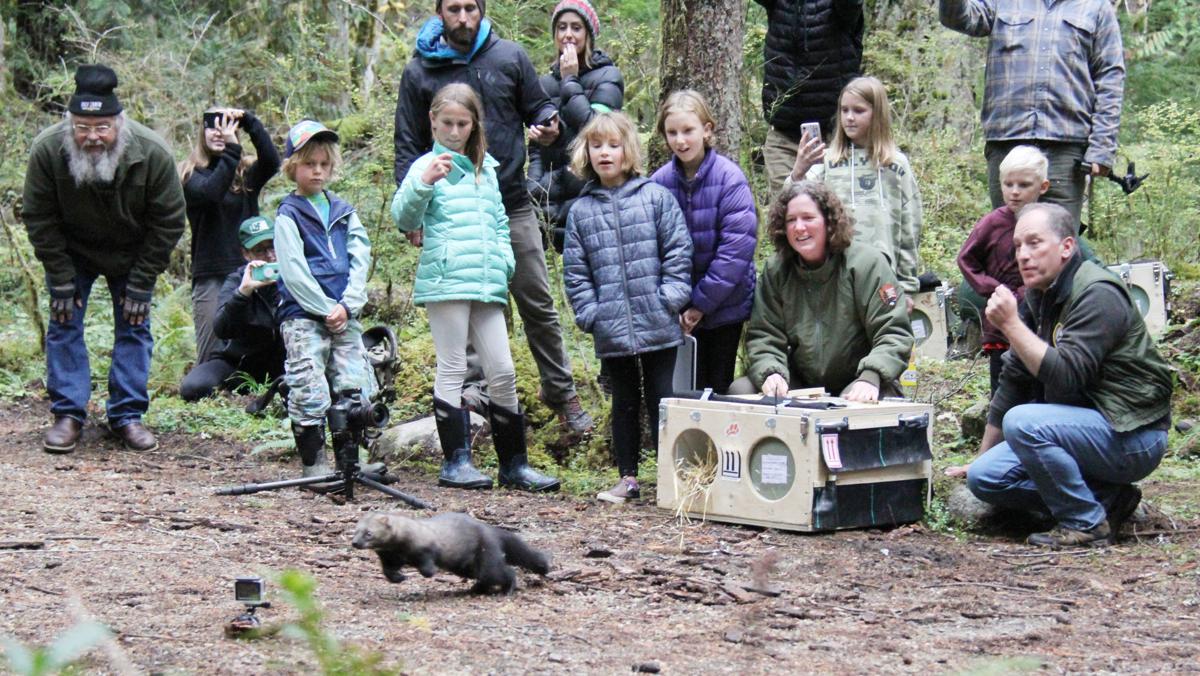 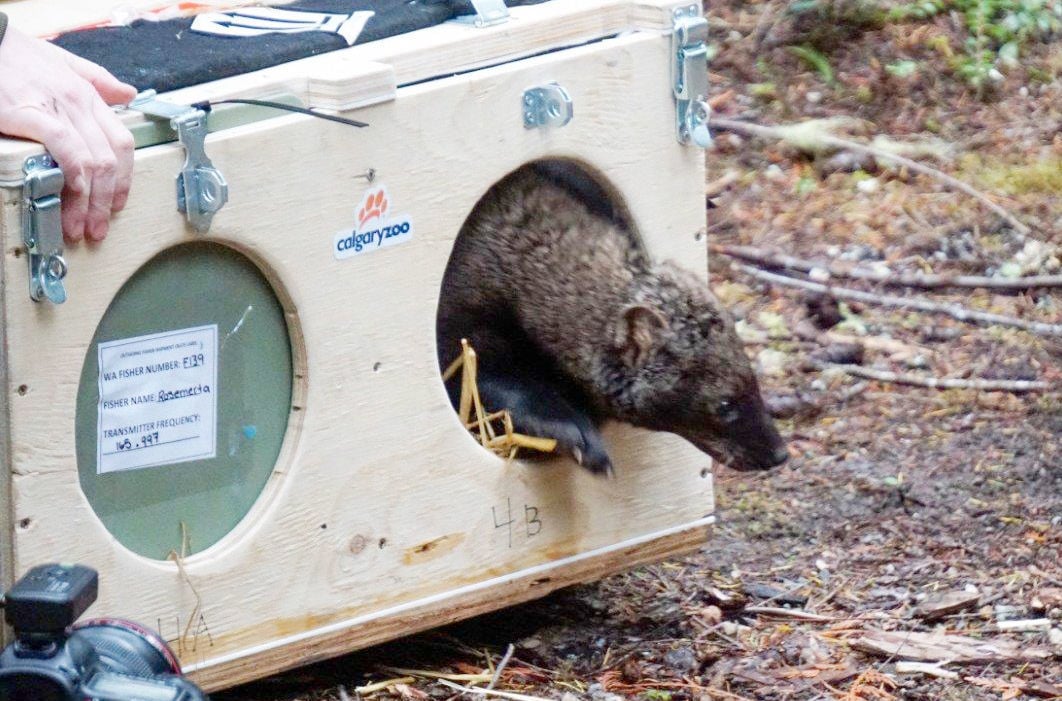 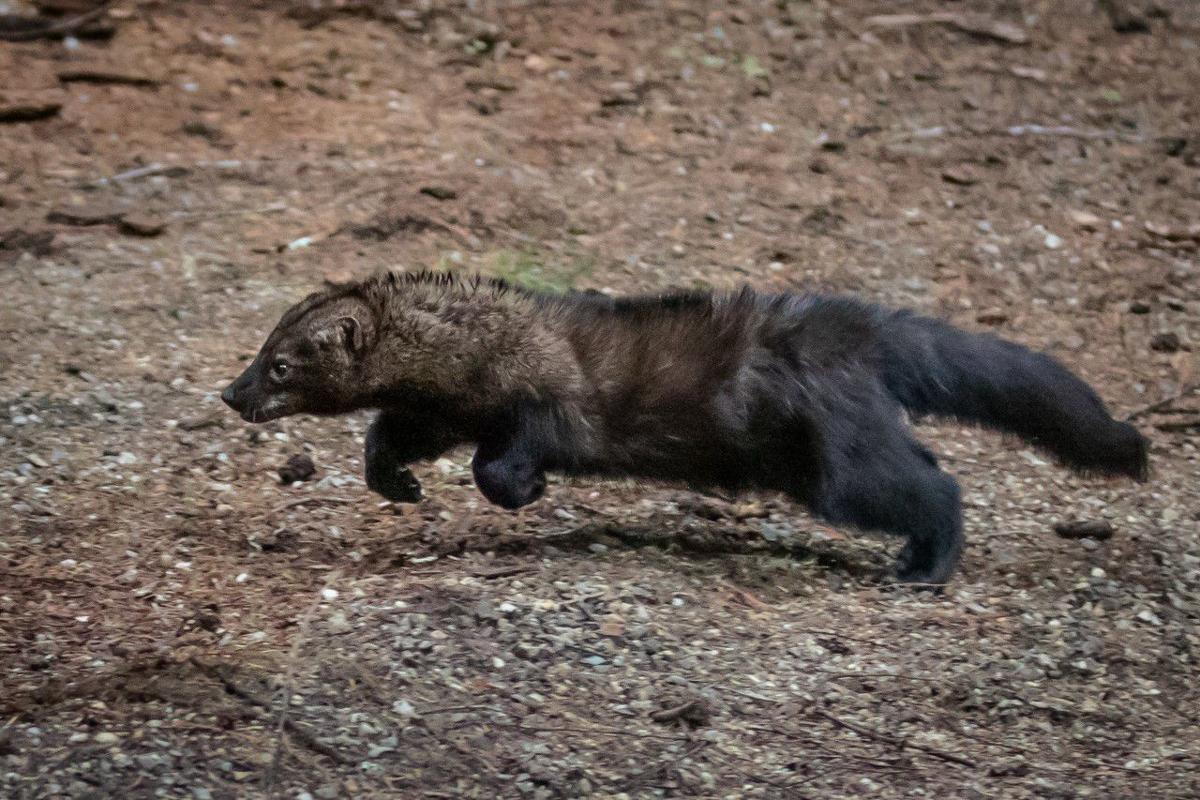 A fisher runs Oct. 24 from a crate into its new home in the woods east of Darrington. State and federal agencies, along with some nonprofits, are working to bring 80 fishers to the North Cascades region to restore the long-missing species to the ecosystem.

In a continuing effort to restore house cat-like, furry predators called fishers to Washington’s Cascades, another eight of the critters were released last week into forest land east of Darrington.

A multiyear project involving federal, state and nonprofit partners, as well as some from Canada, aims to bring 160 fishers from areas of Canada where there is a large population into areas of the Cascades where they’ve been absent since facing hunting pressures and habitat changes throughout the early to mid-1900s.

The long-term plan is to release 80 in the North Cascades and another 80 in the South Cascades, largely around Mount Rainier.

In the North Cascades, the recent release of eight fishers brings the total released in North Cascades National Park and Mount Baker-Snoqualmie National Forest lands to 44.

North Cascades National Park wildlife biologist Jason Ransom said the relocation effort is done during the fall or winter so the animals can establish themselves before breeding season.

“The best time to catch them and move them and release them is all in the winter, since mating and denning (when mothers raise their young) happens in February and March,” Ransom said. “We want to get them moved before that window.”

The goal for this year is to release 50 fishers — meaning 32 more — into areas of the North Cascades.

During the most recent release Thursday, as with some earlier ones, the partner agencies invited families to participate. Children once again helped carry the crates to the release sites and watched as the fishers bounded of the wooden boxes into the woods.

The four female and four male fishers released Thursday were, like those that came before then, captured in Alberta, underwent veterinary care at The Calgary Zoo in Alberta and were equipped with radio transmitters to track their movements and document recovery of the population.

While Ransom said it’s too early to say how the first fishers released in the North Cascades are doing, those released earlier in the South Cascades have shown signs of establishing homes, and young have been caught on camera.

In the North Cascades, some of the fishers released last year have died. Ransom said of the 10 that died, some of the bodies have been recovered and are undergoing DNA testing to determine whether they were killed by cougars, bobcats or another predator.

“The challenge of the first year of a reintroduction like this is that you’re putting animals on a landscape where there are no other fishers, so they’re going to wander more trying to figure out the world ... and if you don’t know where all the cougars and bobcats live, the risks are higher,” Ransom said.

He expects the fishers released this year will fare a bit better than the 38% mortality seen in the first year.

“There are more fishers in the neighborhood ... so I would suspect we would have a higher survival this year,” Ransom said.

The effort to bring the fisher back to the Cascades began with the first animals being reintroduced in 2015. The species was once considered extinct in the state and is currently listed by the state as endangered.

“Fishers are part of this ecosystem, they are a native animal here that was wiped out by people,” Ransom said, adding that for the National Park Service part of the agency’s mission is to restore biodiversity so that public lands are resilient to changes such as a warming climate. “The habitat is here, the food is here, all the resources are here — we just have to put them back because we are completely to blame for taking them out.”

Fishers are an important part of the ecosystem because they hunt various smaller mammals including beavers, squirrels and snowshoe hares, as well as porcupines that few predators are known to attempt eating.