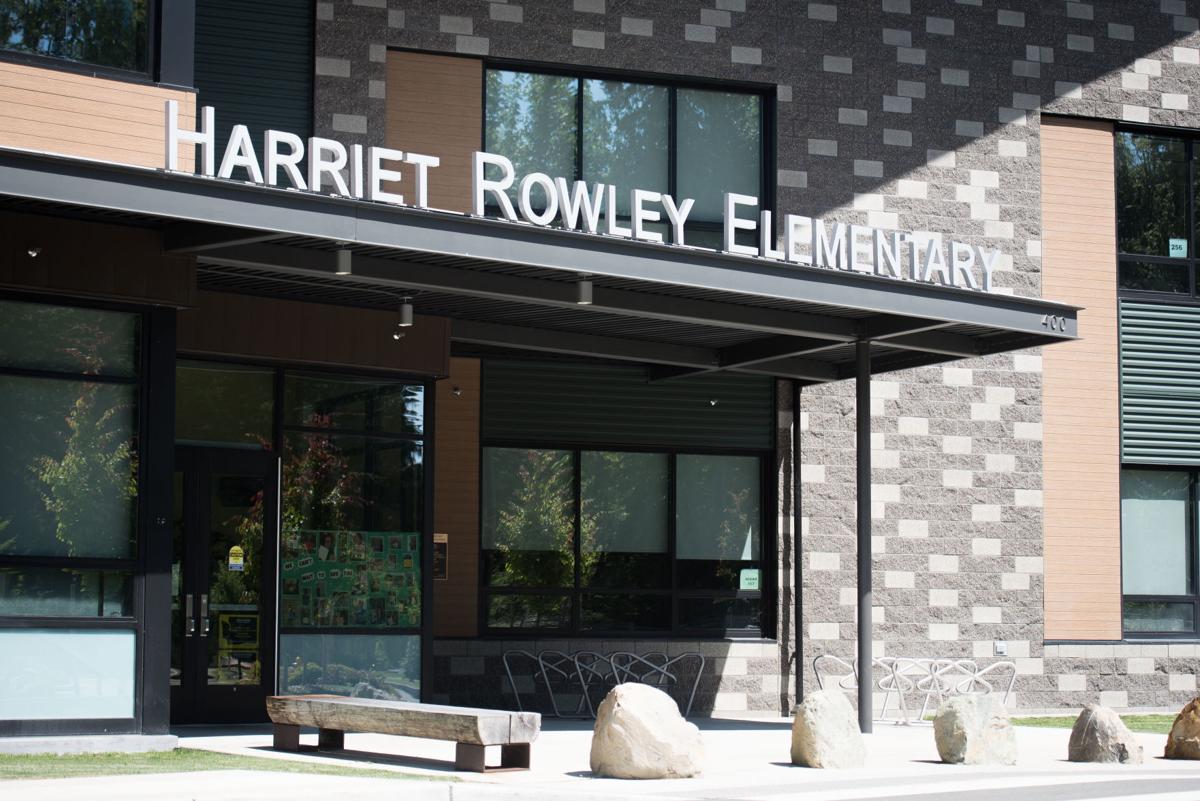 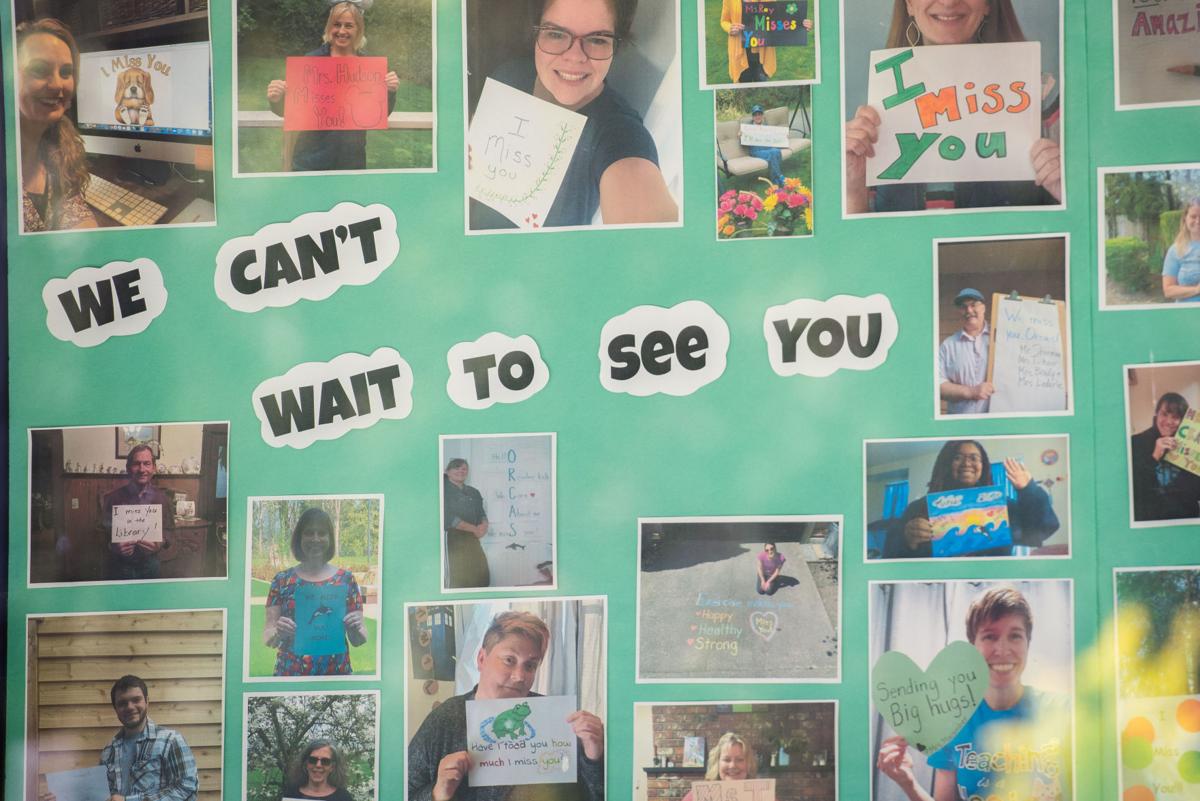 A collage reading “we can’t wait to see you” and accompanied by pictures of Harriet Rowley Elementary School teachers is seen Monday through the front door of the school. The Mount Vernon School District announced Monday that the school year would start with most learning done online. 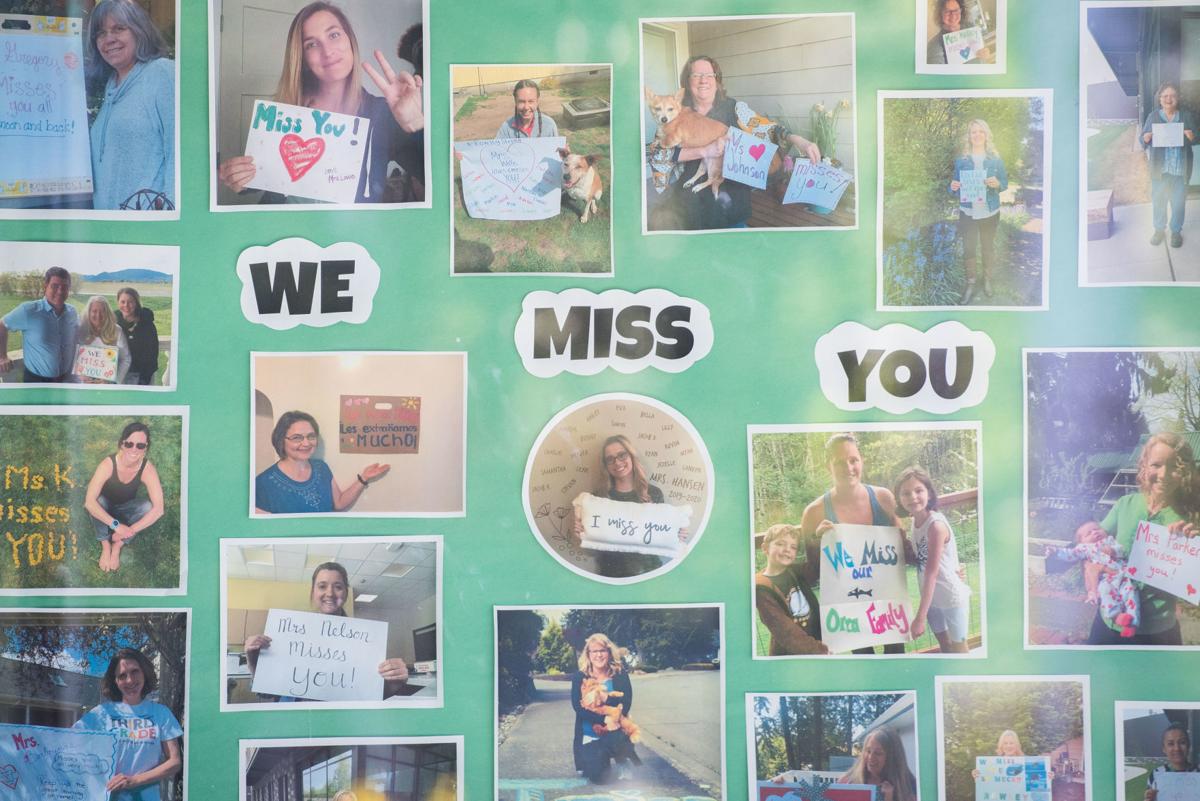 A collage reading "we miss you" and accompanied by pictures of Harriet Rowley Elementary School teachers is seen Monday through the front door of the school.

A collage reading “we can’t wait to see you” and accompanied by pictures of Harriet Rowley Elementary School teachers is seen Monday through the front door of the school. The Mount Vernon School District announced Monday that the school year would start with most learning done online.

A collage reading "we miss you" and accompanied by pictures of Harriet Rowley Elementary School teachers is seen Monday through the front door of the school.

MOUNT VERNON — The Mount Vernon School District announced Monday that when school resumes in the fall most instruction will take place online.

“We just didn’t feel like it was a good move for us to open our schools at this point,” Mount Vernon School Board President Larry Otos said.

The district unveiled what it calls its “Remote Plus Model for a Safe Start,” which will see most students continue to learn remotely, although some will have in-school opportunities, according to a news release from the district signed by Otos and Superintendent Ismael Vivanco.

“We make this decision with strong belief that it is the safest option for our community as a whole,” the release states.

Those in-person opportunities would be for students with special and unique needs, English language learners and students “furthest from educational justice,” and will be done in accordance with local and state public health guidelines, the release states.

The district plans to use its Remote Plus model until at least Dec. 18 — the start of Christmas break.

“I don’t think anyone’s happy with not going back to school,” Otos told the Skagit Valley Herald. “We’re not happy with it. But is it the right decision right now? Yes it is.”

When schools first closed due to the pandemic in March, districts were told to prepare for a shutdown that would last about a month. Soon after, Gov. Jay Inslee announced that schools would remain closed for the rest of the school year.

In light of the long-term closure, the state Office of the Superintendent of Public Instruction began outlining guidelines regarding online, or remote, learning plans.

When state Superintendent Chris Reykdal on June 11 announced his initial guidance for schools to reopen, he stated his preference was for as much face-to-face learning as possible, but he gave each of the state’s 295 school districts the leeway they needed to make the best decisions for themselves.

At that time, state health data regarding COVID-19 and its spread showed the number of new cases was trending downward, as were hospitalizations and deaths, Reykdal said in a July 22 video regarding school reopening plans.

That is no longer the case, he said in the video. Now, all of those metrics are on the rise.

In light of those trends, some school districts, such as the Seattle district, have announced their intentions to continue with online learning at least for the first part of the school year — something Reykdal said other districts might be preparing to do as well.

With an increasing number of COVID-19 cases in Skagit County, Otos said the board thought continued remote learning was the safest option for the district’s students and staff.

He pointed to Inslee’s proclamation regarding public meetings as additional rationale to keep students off campuses: If school boards comprised of elected officials can’t yet meet in person in full and with the public present, how can they expect to send kids and staff back to school?

“The board doesn’t want distance learning any more than probably anybody else does,” he said. “But we don’t want to get anybody else sick. It’s just too risky.”

As the district began delving into the possibilities for the school year, question after question arose, and guidelines kept changing — even as of last week when Inslee announced new guidelines designed to help slow the spread of COVID-19.

Districts that choose a remote learning model must still work to identify child care options for school-aged children whose guardians don’t have the option to stay home; address gaps in connectivity and technology so each student is able to access their online learning; continue providing school meals for students who need them; and determine which students need additional support and deliver that support, Reykdal said in a news release.

Districts that bring students on campuses are required to follow health and cleanliness protocols, including daily health screenings for staff and students, Reykdal said.

“(Face covering) has become an absolute staple for success in the country,” he said in the video. “It turns out that even folks in Washington D.C., are even suggesting this is one of the best things we can do.”

All districts — even those who turn to a remote learning model — need to have daily attendance and student engagements, weekly schedules and assignments and meet the day and hour requirements for learning set by the state, he said.

The Mount Vernon district is still looking at ways to address some of the issues, such as child care, Otos said.

“We recognize that remote learning creates hardships for families and leads to inequitable learning opportunities for our students,” the release states. “We know we do our best work and serve our students, families, and community most effectively when we are able to teach children in our schools 100% of the time.”

“Districts were not prepared to do that,” he said. “We have the tools and we have the information now to start the school year way ahead.”

The school board will hear more about the plan at its Wednesday meeting, and is expected to approve the plan Aug. 5, Otos said.

Other districts in Skagit County are in similar positions, with their boards set to make decisions regarding the start of school in the near future.