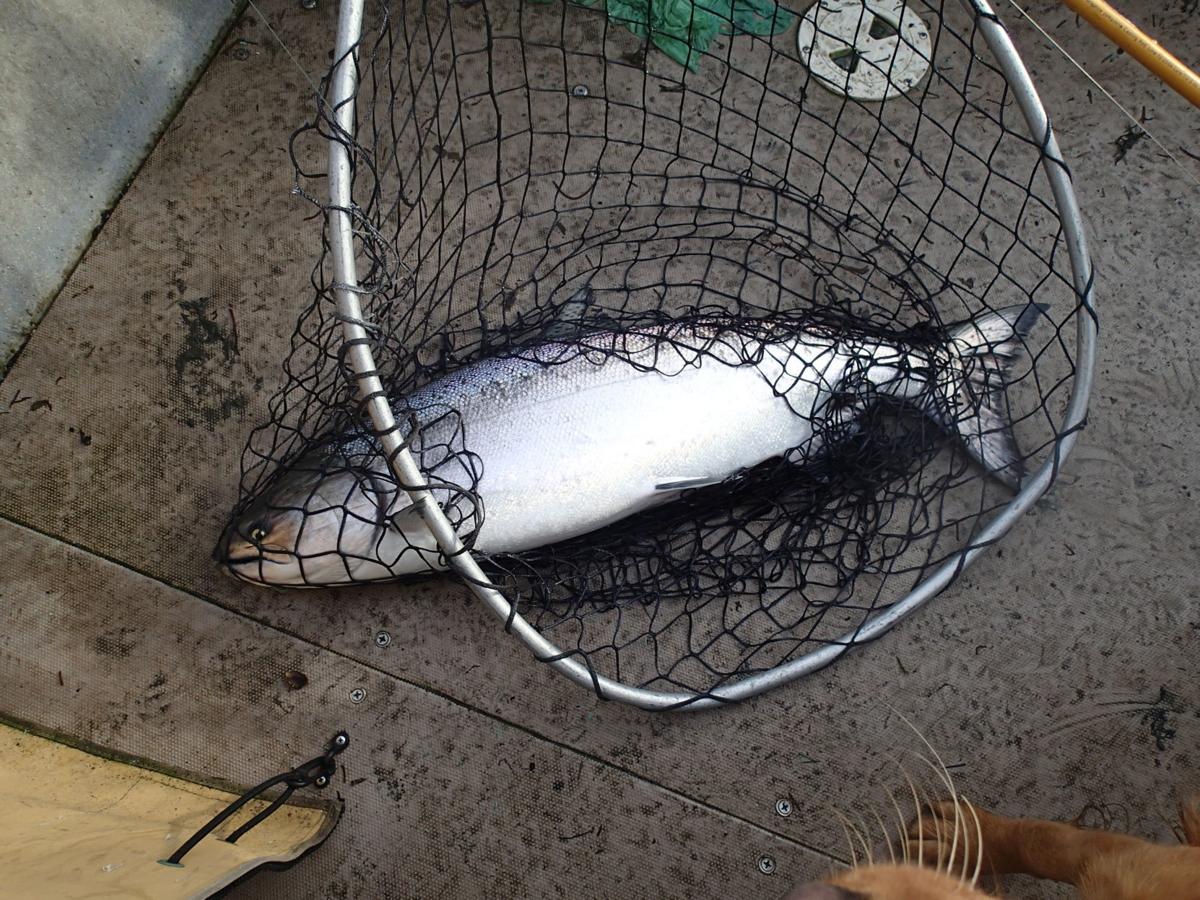 A chinook salmon rests in a net on Kwiaht’s research boat after being caught in Rosario Strait as part of ongoing research to understand the food web of the Salish Sea. 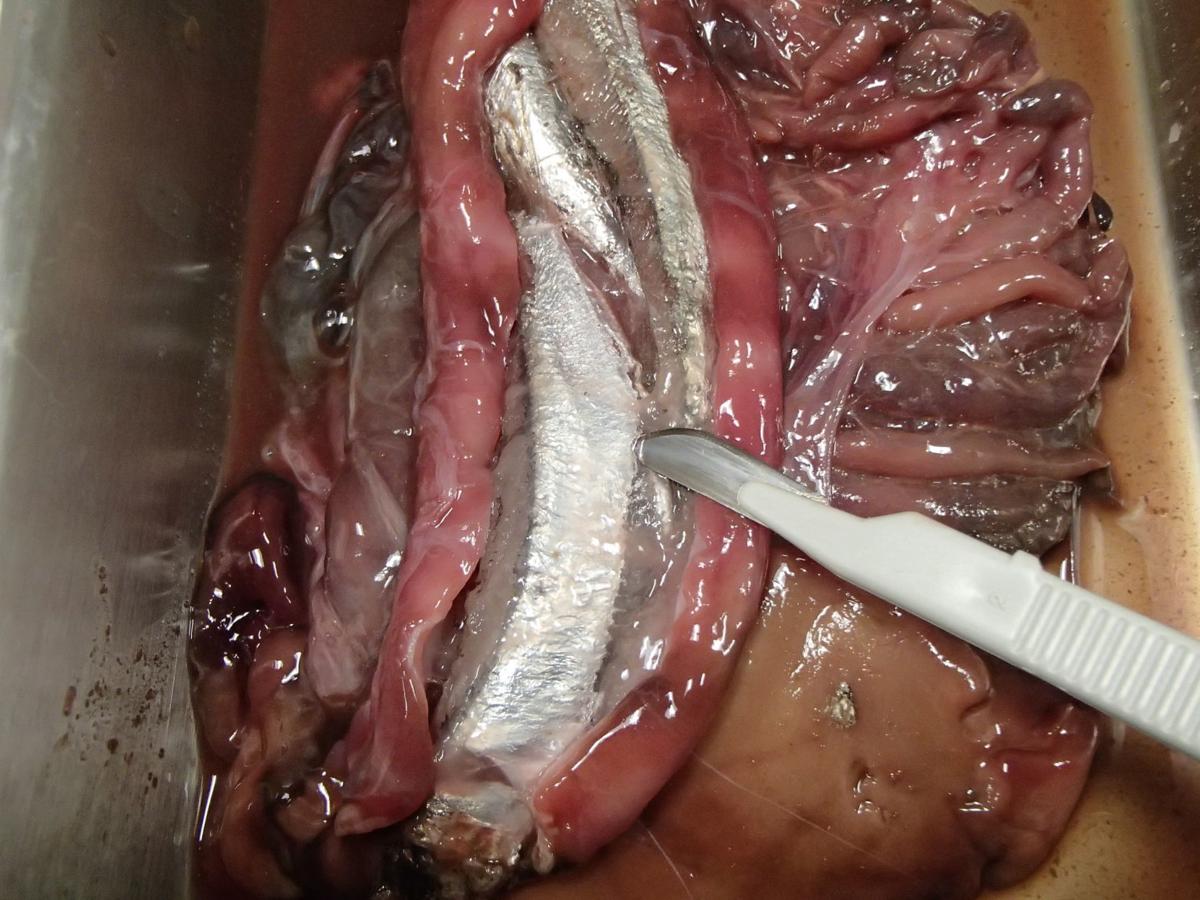 The stomach of a chinook salmon is cut open to reveal forage fish inside. 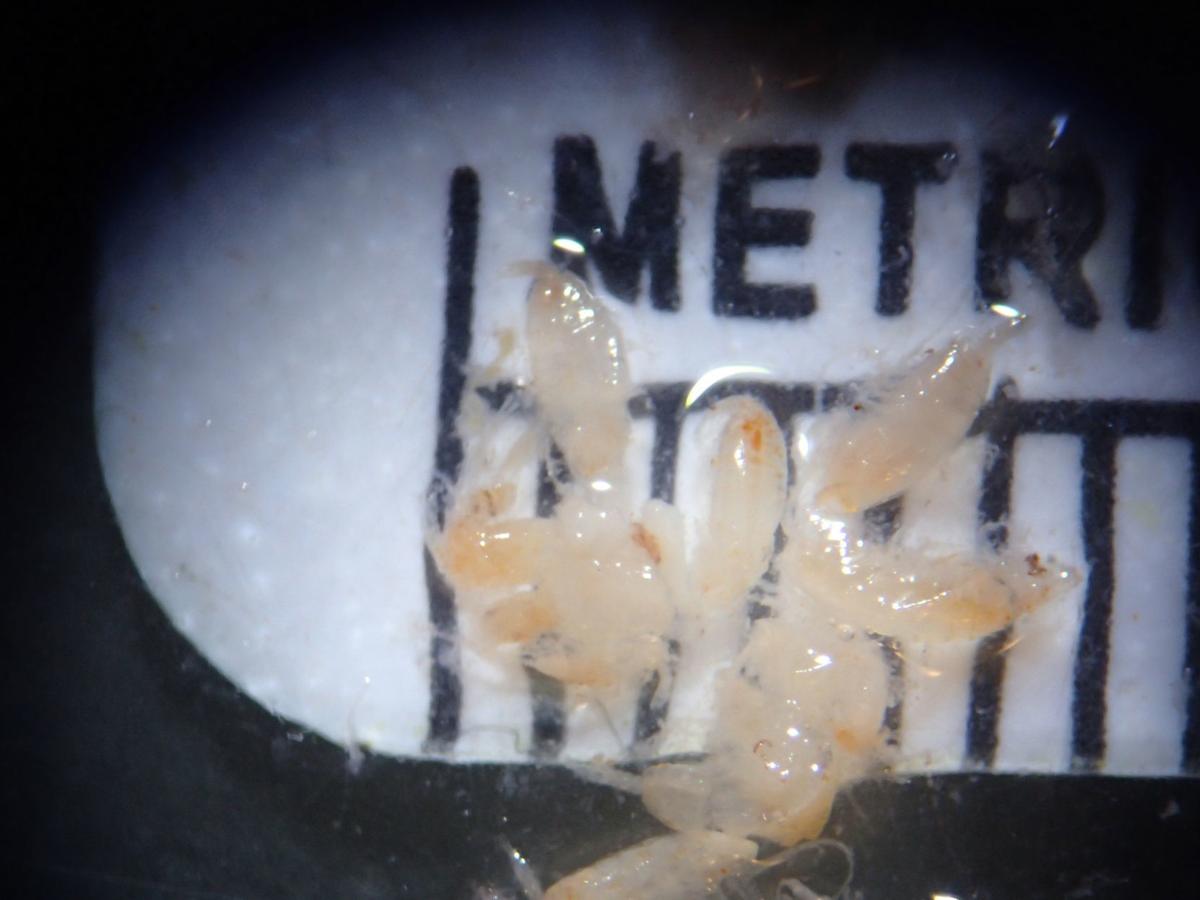 Through its study of the food chain of the Salish Sea, the research group Kwiaht has found tiny marine creatures such as these in the stomachs of forage fish. 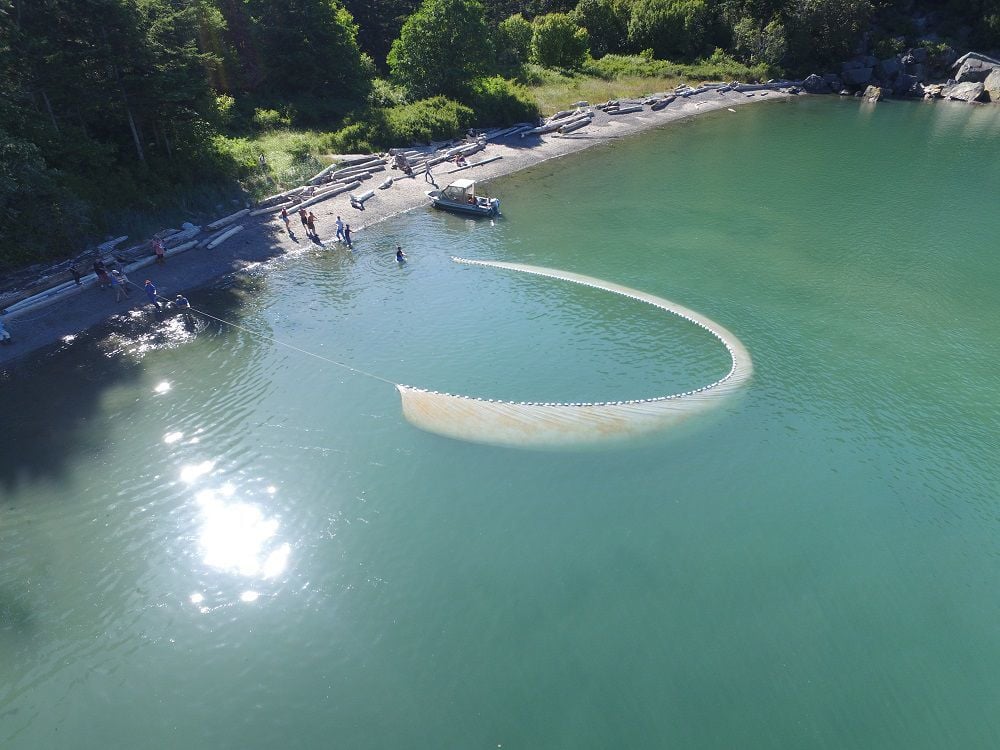 Kwiaht researchers and volunteers pull in a beach seine net to collect forage fish and chinook salmon for ongoing research of the marine food chain.

A chinook salmon rests in a net on Kwiaht’s research boat after being caught in Rosario Strait as part of ongoing research to understand the food web of the Salish Sea.

The stomach of a chinook salmon is cut open to reveal forage fish inside.

Through its study of the food chain of the Salish Sea, the research group Kwiaht has found tiny marine creatures such as these in the stomachs of forage fish.

Kwiaht researchers and volunteers pull in a beach seine net to collect forage fish and chinook salmon for ongoing research of the marine food chain.

In an effort to identify more pieces of the puzzle affecting endangered Southern Resident orca whales, a nonprofit research group is looking to examine the stomach contents of chinook salmon caught in areas of the Salish Sea.

For the third year, the group, Kwiaht: Center for the Historical Ecology of the Salish Sea, will have a presence at the annual Resurrection Derby in Anacortes to help clean fish in exchange for obtaining stomach samples and other data for ongoing research.

The derby is scheduled for Feb. 1-2, with weigh-ins at the Cap Sante Marina.

“The fishing derbies in particular are a great resource for collecting scientific data,” Kwiaht wildlife biologist Christian Oldham said, explaining that the researchers would rather use fish being caught for consumption than catch and harm more fish for their work. “The salmon derbies that are already happening offer a great opportunity to partner with local fishermen. The fish are going to be consumed, so they are going to be used anyway.”

Kwiaht is studying what chinook salmon eat in area waters, with a particular focus on whether they eat anchovies. The answer could be critical to helping the Southern Resident orcas survive as climate change heats up the Salish Sea and changes the food web.

“A significant, as-yet-understudied dimension of (Southern Resident orca) ecology and conservation is forecasting the effects of climate change on Salish Sea forage fish populations and chinook stocks that prey on those forage fish,” a Kwiaht project description states. “A warmer ocean is stressful for salmon and ... is also bringing new forage fish species into the Salish Sea, which may or may not benefit chinook and (Southern Residents).”

It is well known that the Southern Resident orcas are struggling to survive, with the population comprised of three family groups — called J, K and L pods — declining to 73 whales in 2019 despite protection under the Endangered Species Act since 2005.

The makeup of the forage fish in area waters is changing, with species such as Pacific herring decreasing and species such as Northern anchovy increasing, according to recent research.

“As our climate changes we are seeing a shift in the populations of forage fish, the kinds of forage fish, that are thriving in the Salish Sea,” Kwiaht Director Russel Barsh said. “The big question is which predators, including both fish like chinook salmon and marine mammals ... are going to be able to make the switch and survive by taking advantage of new food sources as some of their familiar food sources decline or move north.”

Kwiaht is working to determine whether chinook will eat the anchovies that are moving into area waters.

The research group also wants to understand what anchovies and other forage fish eat in order to determine whether competition for that food is problematic.

“Our project is evaluating whether Northern anchovy are a viable alternative prey for chinook salmon,” Kwiaht Lab Manager Madrona Murphy said. “We’re also exploring the possibility that anchovy compete with other forage fish rather than adding to them.”

“This project will comprise an initial assessment of the extent to which growing stocks of Northern anchovy have begun competing with, or substituting for, declining Pacific herring populations that historically sustained Salish Sea chinook and thereby (the orcas),” the project description states.

Kwiaht has a research lab on Lopez Island and does a variety of field work by boat throughout the year. Some of that work involves collecting young chinook and forage fish in nets called seines.

Barsh said stomach contents of the chinook are flushed out using syringes of saltwater — a technique that extracts the sample without killing the fish. Forage fish are dissected in the lab so that their jelly bean-sized stomachs can be analyzed.

From fishing derbies in 2018 and 2019, Kwiaht received 324 stomach samples from chinook caught by anglers. Barsh said those chinook had mainly eaten Pacific herring, and when herring weren’t present, they appeared to mainly eat shrimp.

Those results indicate that young chinook depend on herring while in the waters around the San Juan Islands — and the current decline of herring could be problematic for the salmon and the Southern Resident orcas.

Kwiaht’s research is supported by grants from the National Fish and Wildlife Foundation’s Southern Resident Killer Whale Conservation program and the involvement of federal, state, university and other nonprofit partners.

For more information about helping with the research, contact Kwiaht by email at info@kwiaht.org.