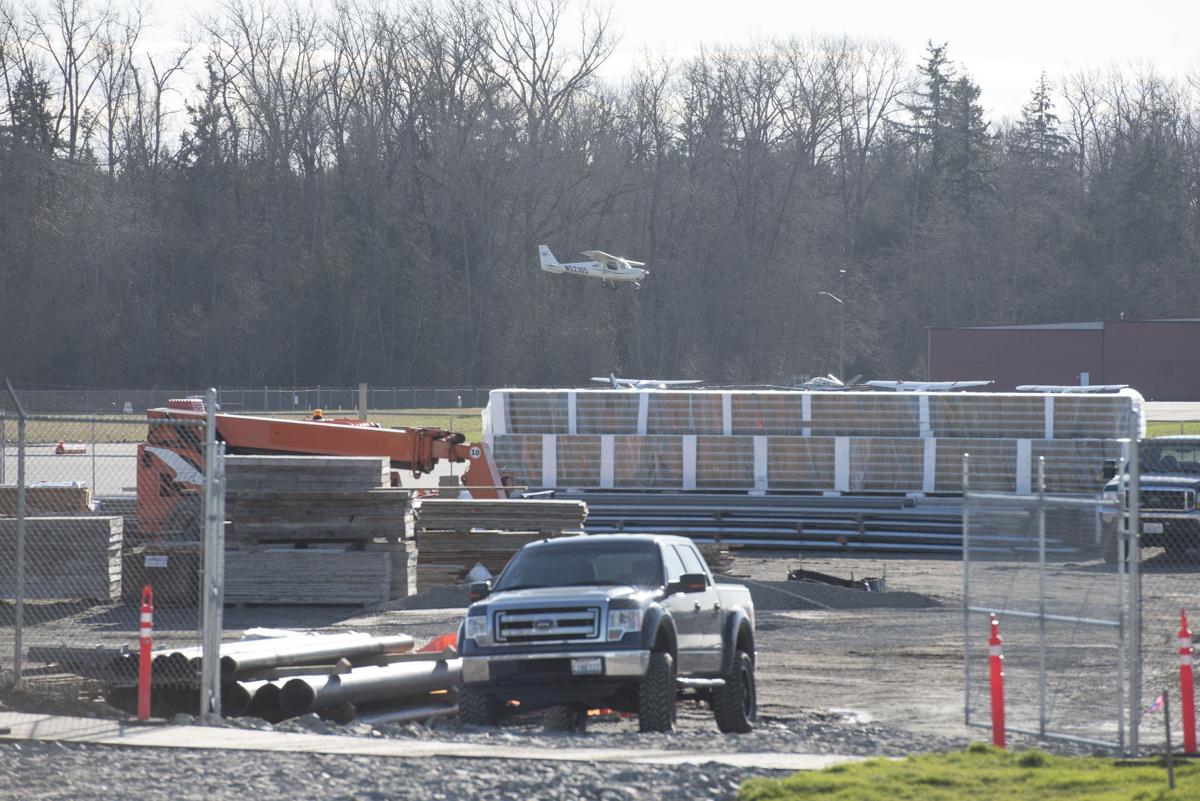 A plane lands Feb. 9 at Skagit Regional Airport as construction is done next to the Corporate Air Center. The development will include large box hangars and expanded apron space. 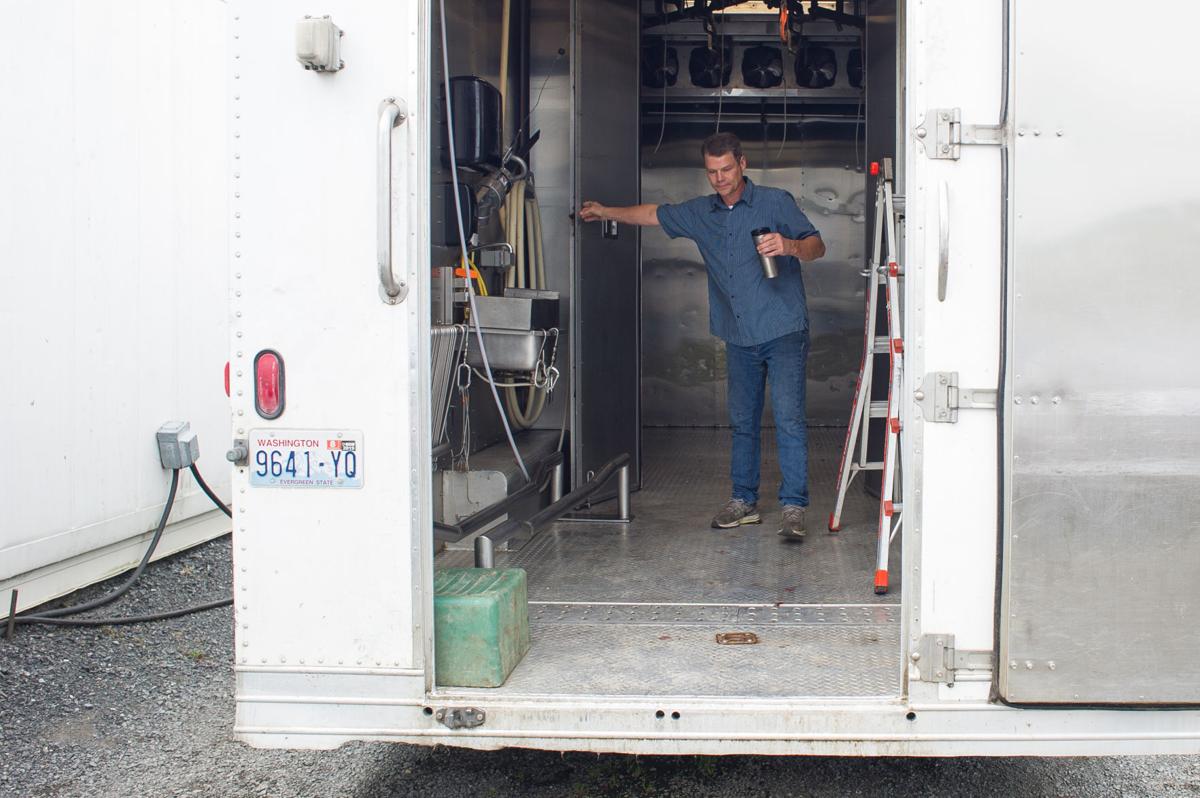 Jim Wieringa, manager at the Island Grown Farmers Cooperative, walks through the mobile slaughter unit at the cut and wrap facility in Bow in July 2019. The co-op is building a new processing facility at the Port of Skagit.

A plane lands Feb. 9 at Skagit Regional Airport as construction is done next to the Corporate Air Center. The development will include large box hangars and expanded apron space.

Jim Wieringa, manager at the Island Grown Farmers Cooperative, walks through the mobile slaughter unit at the cut and wrap facility in Bow in July 2019. The co-op is building a new processing facility at the Port of Skagit.

At Port of Skagit properties, a large airport construction project is progressing, a boat builder is expanding, and a bakery and a local meat processing cooperative are setting up shop.

“I think there’s a lot of growth happening at port properties in value-added agriculture, maritime, and aerospace sectors,” said Linda Tyler, the port’s community outreach manager. “It’s great to see that, especially with economic recovery on everyone’s mind. It’s a positive thing to see this growth and what it means for our community.”

Eighty-seven tenants operate out of the port’s properties, which are Skagit Regional Airport, La Conner Marina, Bayview Business Park and Sedro-Woolley Innovation for Tomorrow (SWIFT) Center. About 1,500 are employed across all four properties.

The port is adding two new positions — a project manager and an environmental planning specialist — to facilitate the growth, according to a port news release.

Over the next 20 years, the port is anticipating an increase in business jet traffic at Skagit Regional Airport and is preparing to meet the need.

At the southeast end of the airport, near Corporate Air Center, the port is adding 234,000 square feet — about 5.4 acres — of apron space to accommodate larger business aircraft.

Tyler said phase 1 of the apron expansion is complete and phase 2 is expected to be finished by late summer. She said Federal Aviation Administration (FAA) grants are funding 90% of the $5.2 million project.

Port of Skagit Executive Director Patsy Martin said the airport can accommodate jets that seat about 30 people, including crew. Companies use the aircraft to transport people in and out of Skagit Valley to do business, she said.

“It used to be we didn’t have any business jets at the airport, then we had one, and now we have three, and it’s growing,” she said.

According to the port’s airport master plan update, the number of jets, turboprop aircraft and helicopters at the airport is expected to grow over the next 20 years.

The FAA recommends airports update their master plans every 10 years. In June, the port’s plan received approval from the FAA.

While business activity grows, Martin said the airport will remain a facility for general aviation and recreational pilots.

General aviation aircraft make up the largest share (about 84%) of the airport’s fleet mix, though that share is expected to shrink to 71% by 2039, according to the master plan.

A new aerospace business is operating at the Port of Skagit, and a maritime company is expanding.

Systima Technologies, an aerospace engineering and manufacturing company headquartered in Kirkland, built a facility last year on port property west of the airport.

Mavrik Marine, which has been a port tenant for about eight years, has outgrown its current facility and needs room to expand, the company said last May. The boatbuilder, which specializes in metal boats, has 94 employees and may increase its workforce up to 130 following the expansion, the company said.

The port secured a $2.25 million loan and $750,000 grant from the state Community Economic Revitalization Board (CERB) to support the project.

Tyler said Mavrik Marine is expecting construction to be mostly complete by the end of the month.

To support the county’s agricultural industry, the port has made it a priority to draw value-added agricultural businesses to the area. Two new tenants have signed leases with the port.

Island Grown Farmers Cooperative is building a new meat processing facility on port property near the airport. The new facility will be about 2½ times larger than the co-op’s current plant in Bow, and will roughly double the number of animals processed over the next several years, the co-op said last fall.

The expansion will provide more processing capacity to help meet growing consumer demand for locally raised meats. Area ranchers and farmers say one of the biggest challenges is finding a local processor.

The co-op operates a mobile slaughter unit and has about 80 members throughout Skagit, Whatcom, San Juan and Snohomish counties.

The port secured CERB grant funding to support infrastructure needed for the new facility. Tyler said construction of the 4,800-square-foot facility is expected to begin soon, depending on weather.

A new bakery that plans to use locally grown and milled grains is also coming to the port.

Rachael Sobczak started a small-scale bakery, called Rachael & Bread, after the COVID-19 pandemic began. She previously worked at Breadfarm in Edison for 10 years.

She has leased a building at Bayview Business Park east of the airport to expand her bakery. Sobczak said she will exclusively use flour from Cairnspring Mills, which will be the bakery’s next-door neighbor.

Sobczak said she is outfitting the building with a commercial kitchen and plans to bake hearth-style bread and cookies. She said this type of bread is baked in a stone oven under high heat.

She received a donation of a stone oven from a Tom Douglas restaurant in Seattle. If she had to buy this type of oven, it would have cost as much as $85,000, she said.

She hopes to have her bakery up and running by June.

”I’m feeling excited and hopeful and there are a lot of good things happening at the port,” Sobczak said.