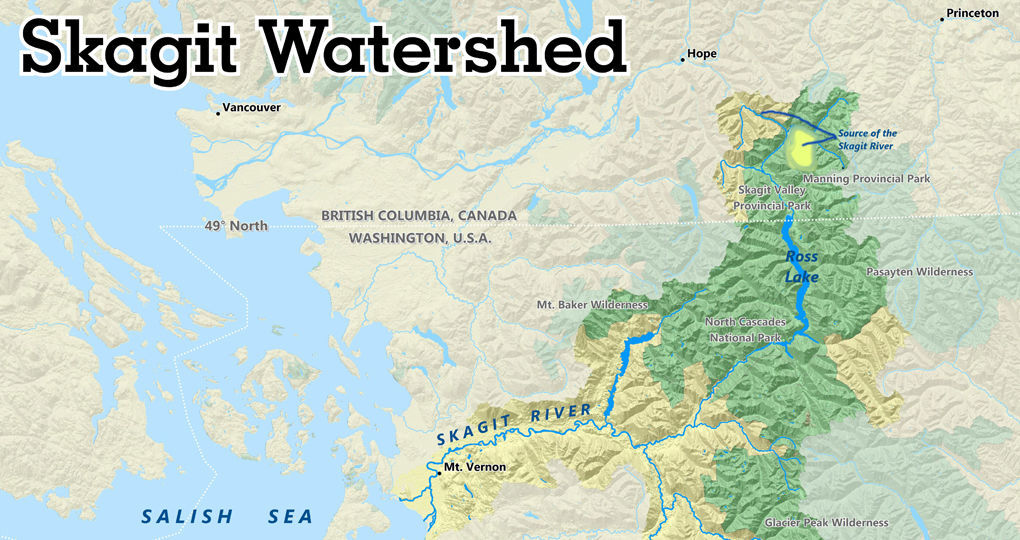 This Skagit Environmental Endowment Commission map shows the Skagit River watershed’s reach across British Columbia and Washington. The donut hole, where possible mining is a concern near the river’s headwaters, is marked in yellow. 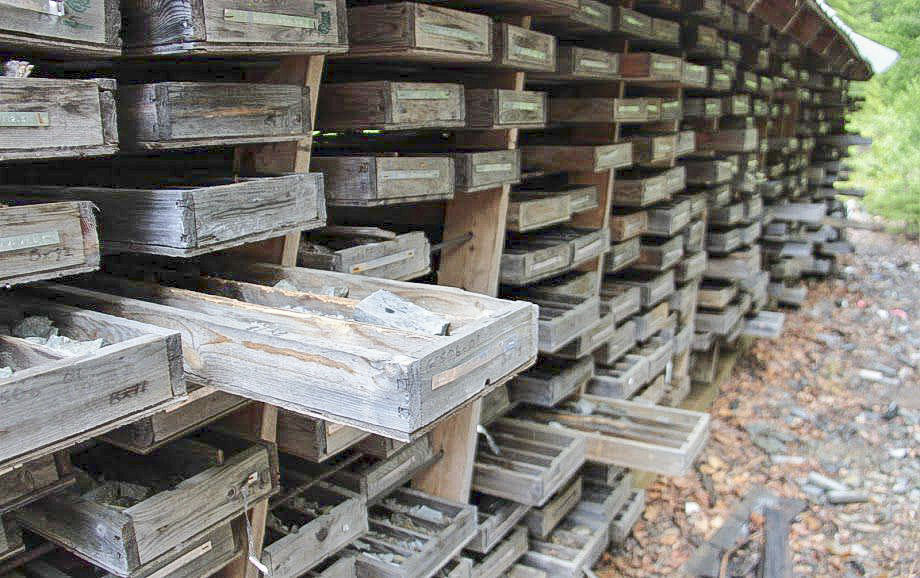 A weathered core sample shack stands as a remnant of past mineral exploration efforts in the donut hole, a patch of unprotected land between provincial parks in British Columbia. Imperial Metals has proposed further mining exploration in the region, which contains the headwaters of the Skagit River. 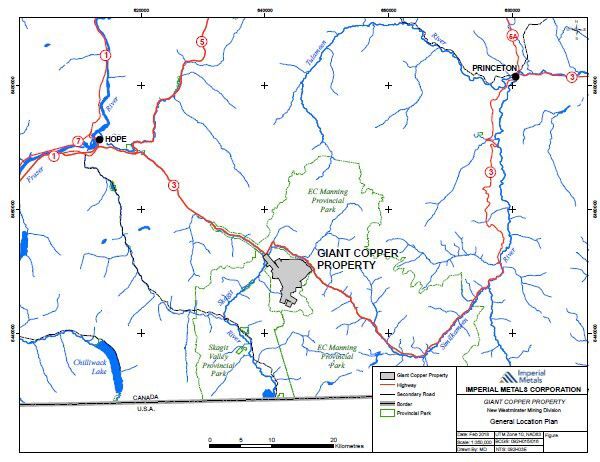 Imperial Metals proposes searching the donut hole for copper and gold. It calls the region its Giant Copper Property. 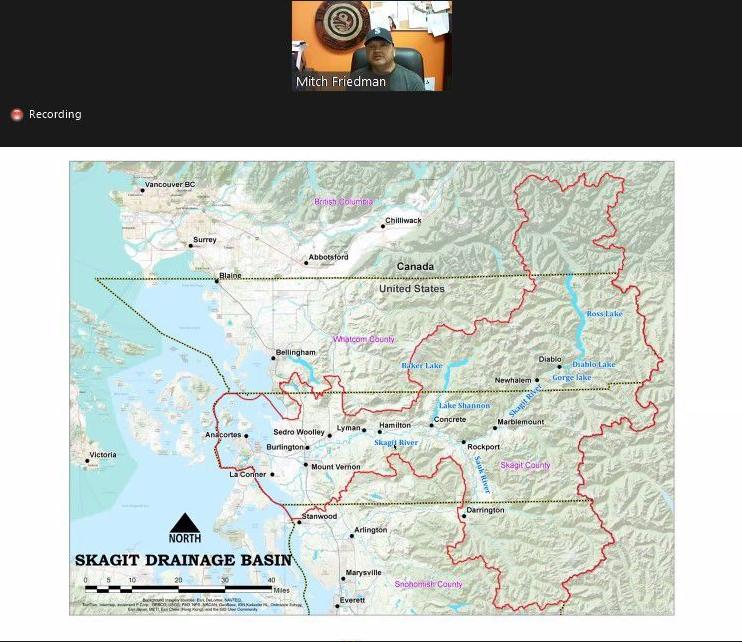 Scott Schuyler of the Upper Skagit Indian Tribe speaks during a digital event Sept. 30 about cross-border mine concerns. A proposal within the Skagit River watershed, shown on the map, is one of many B.C. mine sites with implications for U.S. waters.

This Skagit Environmental Endowment Commission map shows the Skagit River watershed’s reach across British Columbia and Washington. The donut hole, where possible mining is a concern near the river’s headwaters, is marked in yellow.

A weathered core sample shack stands as a remnant of past mineral exploration efforts in the donut hole, a patch of unprotected land between provincial parks in British Columbia. Imperial Metals has proposed further mining exploration in the region, which contains the headwaters of the Skagit River.

Imperial Metals proposes searching the donut hole for copper and gold. It calls the region its Giant Copper Property.

Scott Schuyler of the Upper Skagit Indian Tribe speaks during a digital event Sept. 30 about cross-border mine concerns. A proposal within the Skagit River watershed, shown on the map, is one of many B.C. mine sites with implications for U.S. waters.

As elected leaders in British Columbia settle into new terms, a broad coalition of Canadian and U.S. elected officials, indigenous representatives, and conservation and recreation groups are calling on them to address a looming transboundary concern on the Skagit River.

While B.C.’s government moved in late 2019 to prohibit additional logging in a region of the upper Skagit River watershed in response to environmental concerns, the potential for mining in the area hasn’t been addressed.

The region is called the donut hole because it is a patch of unprotected land surrounded by Skagit Valley and EC Manning provincial parks, which share borders with North Cascades National Park and U.S. Forest Service lands in Washington state.

The unprotected land in B.C. holds within it the headwaters of the Skagit River — the largest river in Puget Sound and a critical resource for drinking water, irrigation, and fish and wildlife as it winds through Washington to Skagit Bay.

Mining company Imperial Metals applied in March 2019 to explore the donut hole for copper and gold. That application is pending.

“The proposed mining activities and potential future development of a mine in the Canadian Skagit headwaters provides a real and significant threat to many of the values connected to the Skagit River and watershed in Washington ... The Skagit River supports the largest populations of threatened steelhead and Chinook salmon in the Puget Sound,” states a Jan. 12 letter to B.C. Premier John Horgan.

They are part of a growing coalition of 207 members against mining in the donut hole.

“There are a lot of folks, organizations, governments, that have very strong opposition to mining in the headwaters,” Skagit Watershed Council Executive Director Richard Brocksmith told the Skagit Valley Herald.

Brocksmith is part of the coalition as a Mount Vernon City Council member and through his role with the Skagit Watershed Council. He was also appointed by Seattle Mayor Jenny Durkan as an alternate member to the Skagit Environmental Endowment Commission that formed as part of the High Ross Treaty, and he works on cross-border issues in the watershed.

Coalition members sent letters about their concerns to Canadian officials in 2019. The new outreach is intended to bring fresh attention to the issue.

“We thought this was a good time to voice the opposition from a growing international coalition,” Brocksmith said.

Coalition members are united in their concern for water quality, fish and communities downstream of the potential mine site, as well as how mining activities could violate the High Ross Treaty signed in 1984 and even earlier treaties signed with indigenous communities on both sides of the border.

“We think the Skagit is just too important ... to risk the impacts a mine like this could have to the watershed system,” Brocksmith said. “That water is (consumed) by our communities. It’s not just about salmon.”

“The latest group of letters are intended to ensure that the newly elected Ministers in the BC government are fully aware of the diverse and growing opposition to the pending mining permit in the headwaters of the iconic Skagit River,” Washington Wild Executive Director Tom Uniack said in a Jan. 13 news release.

Washington Wild is a nonprofit working to protect wilderness in the state and is coordinating the coalition.

“What we’re trying to bring to bear with respect to the donut hole is enough pressure from enough people to say: This is too important of an area to allow mining there,” Dennis McLerran, an environmental law expert and member of the Skagit Environmental Endowment Commission, said during a Sept. 30 online event about cross-border mining concerns.

McLerran formerly served as director of the U.S. Environmental Protection Agency’s Region 10, which includes Washington state. He said he is concerned about impacts mining along the upper Skagit River could have on natural resources, livelihoods and recreation throughout the watershed. He said he has seen mines devastate other regions.

“Many of our superfund cleanups in the U.S. have been cleaning up instances when mining goes bad,” McLerran said.

Daniel Schindler, a professor at the University of Washington’s School of Aquatic and Fishery Sciences, said the impacts of mines extend through generations, and eventual cleanup often doesn’t mitigate the damage.

“Even when we pour millions of dollars into restoration projects ... in many cases they simply don’t work,” he said.

That puts valuable resources at risk.

“We’re talking about cultural values, spiritual values and, in fact, economic values,” Schindler said. “The salmon in the Skagit, for example, have in the past supported very valuable commercial and recreational fisheries.”

The potential for mine pollution — including sediment from digging, the metals themselves and acidic wastewater — getting into the river is a concern for the coalition. Several members have highlighted a 2014 Mount Polley Mine disaster in Canada as a reason to reject Imperial Metals’ plans for the donut hole.

“A similar ecological catastrophe of any scale in the headwaters of the Skagit River would create long-term adverse effects in our homeland to the detriment of many generations to come,” states a resolution the Swinomish Indian Tribal Community Senate and Chairman Steve Edwards signed Oct. 6.

Scott Schuyler of the Upper Skagit Indian Tribe spoke about the issue at the Sept. 30 event.

“Our people were considered very rich ... What we had was a river that took care of us, sustained our people. It provided us with everything we needed,” Schuyler said of his ancestors.

Development and water pollution in recent centuries has affected the health of the river, he said, and the potential for mining at the headwaters could impact the watershed from mountains to sea.

The September event was hosted by nonprofits Conservation Northwest and Salmon Beyond Borders. It was called Beyond the Skagit because the Imperial Metals proposal in the donut hole would be the latest of many Canadian mines that impact water quality and communities in the U.S.

Tribal and First Nations representatives said indigenous communities throughout those states and in B.C. have felt the impact and are ready to take a stand — on issues past and threats ahead, including in the Skagit River watershed.

“We want to work with our cousins across the border and east of the Cascades,” Schuyler said. “We all want to protect these watersheds for many reasons, but inherently the most important reason is because it’s the right thing to do. Once you destroy these watersheds you can’t get them back — not in our lifetime, not in our kids’ lifetimes.”

A Canadian company has proposed exploratory mining for gold and copper in the headwaters of the Skagit River in British Columbia.