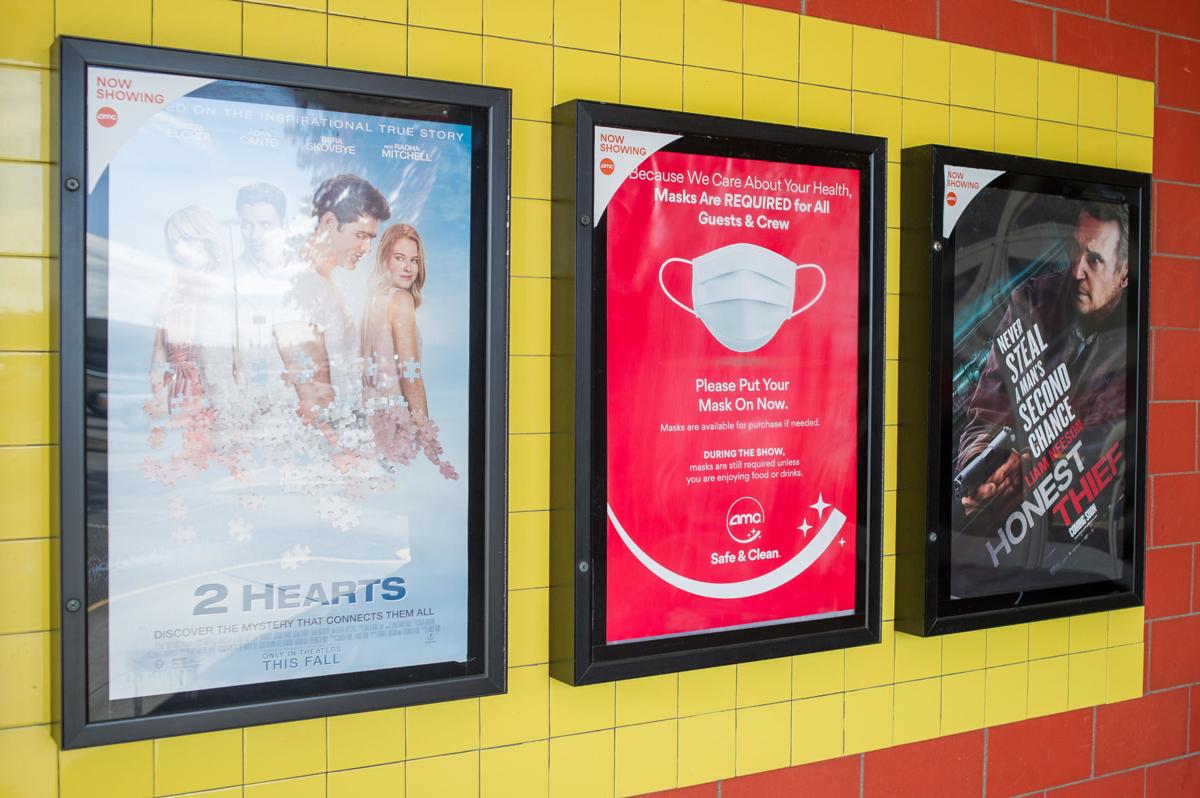 A sign asking guests to wear masks is surrounded by movie posters outside the AMC Theater in Burlington on Wednesday. The theater will open Friday with limited capacity. 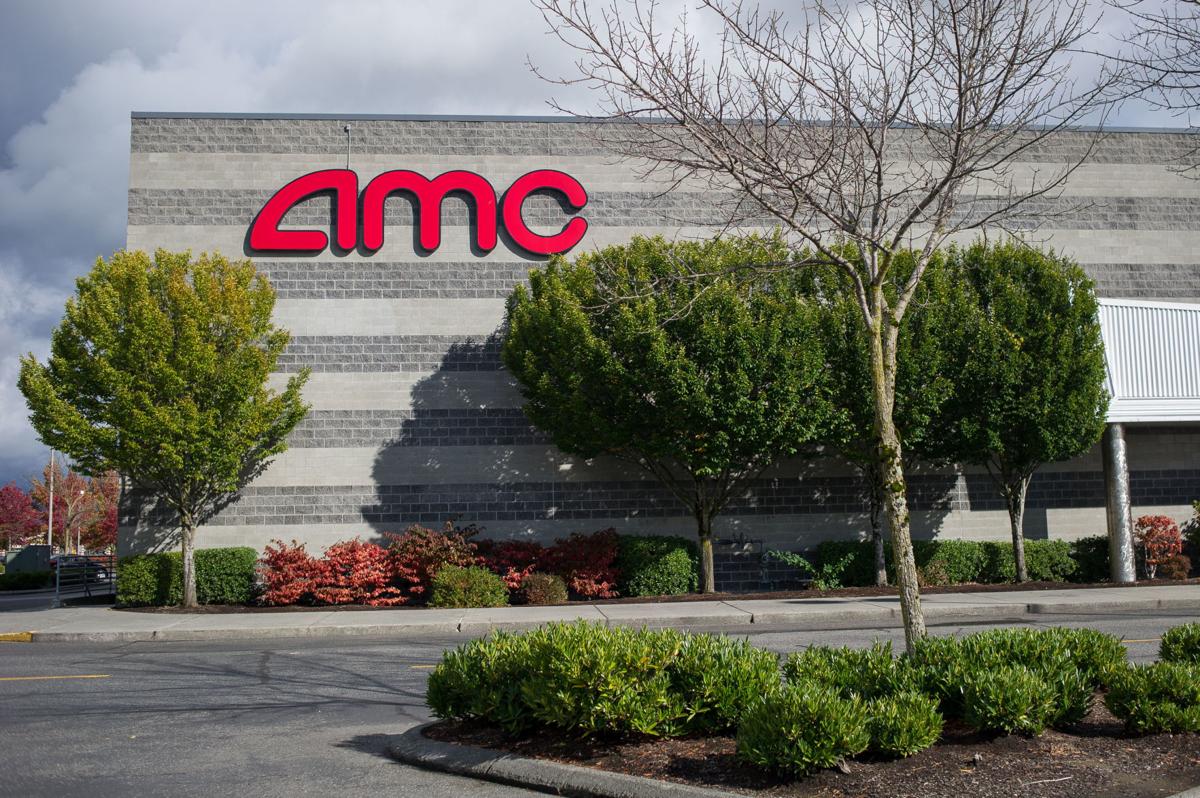 The AMC Theater at Cascade Mall on Wednesday in Burlington. Two theaters in Skagit County will open Friday with limited capacity.

A sign asking guests to wear masks is surrounded by movie posters outside the AMC Theater in Burlington on Wednesday. The theater will open Friday with limited capacity.

The AMC Theater at Cascade Mall on Wednesday in Burlington. Two theaters in Skagit County will open Friday with limited capacity.

After being closed for seven months, some movie theaters in Skagit County plan to welcome back audiences as early as Friday.

The AMC Theater at Cascade Mall and Anacortes Cinemas plan to reopen Friday at 25% capacity.

Earlier this month, Gov. Jay Inslee gave movie theaters in counties in Phase 2 of his Safe Start plan the green light to reopen at 25% capacity.

Face coverings will be required, and may only be removed to eat or drink while seated, according to Inslee’s COVID-19 safety requirements. Theaters must be able to maintain 6 feet of physical distance between households.

AMC has additional requirements for moviegoers, including that they wear face coverings that fit snugly around their mouth and nose, according to company policy posted on its website. Neck gaiters, open-chin bandanas and masks with vents or exhalation valves are not permitted, AMC said.

Anacortes Cinemas plans to operate on a reduced schedule with six showings a day at the three-screen theater, said Jeff Brein, managing partner at Far Away Entertainment, which owns Anacortes Cinemas and seven other theaters in Western Washington.

He said show start times will be staggered to reduce congestion in the lobby before and after movies. The theater is also stepping up its cleaning between showings.

Brein said the theater does not plan to block off seats or rows for social distancing, and trusts audience members to spread out on their own.

“We’ll monitor where people are, but I don’t think that’s going to be a problem at all,” he said.

If audiences return, the theater will consider adding more showings for the holiday season, Brein said.

He said he believes the theater can provide a safe experience for moviegoers.

“People aren’t talking as they might be at a restaurant, they are looking straight ahead at the screen and are socially distanced,” Brein said.

He said the theater has been preparing for months to reopen. It has reconfigured its lobby for social distancing and has installed plexiglass screens.

With the Lincoln having the capacity to seat 500 people, the 25% capacity rule won’t be an issue, Gietzen said.

“The main issue for us is the content that is available,” he said. “There’s only a few mainstream movies out there right now, and those will go to chain theaters and cineplexes.”

Gietzen said the theater is looking at screening a series of Halloween movies, including older films.

There’s also a question of how quickly audiences will return.

“Are people ready to come back?” Gietzen said. “I kind of feel like our audience won’t really be ready to come back. Our audience is middle-aged and older because of the types of films we show. I think they are going to be a little more cautious than someone who wants to see (science-fiction action film) ‘Tenet.’”

He said the Lincoln will continue to show movies in its virtual screening room online, and still offer its Popcorn Pop-up video rental.

Still, reopening at 25% capacity will bring in income for the theater, Gietzen said. He said live performances are unlikely to resume at the Lincoln until fall of next year.

He said the theater is paying employees out of its savings and is hoping Congress passes a second round of federal relief funds for small businesses.

COVID-19 has taken a financial toll on theaters throughout the country, and some have announced permanent closures.

Brein said the challenges for movie theaters go beyond capacity restrictions. Movie theaters will have fewer films to screen because studios have pushed release dates into next year, he said.

“It’s going to be challenging,” he said. “Realistically, it may take us up to a year to get back to where we were.”

Owner Valerie Stafford said the small, historic theater would be able to accommodate about 20 moviegoers per show, which financially doesn’t make sense for the business.

“It’s a very tricky situation for us,” she said. “With restrictions on limited seating it’s hard to make that pencil out.”

For now, the theater has planned two special events: a showing of “Night of the Living Dead” on Oct. 29 and a screening of a local play Nov. 14. How limited capacity for those events pans out will determine whether the theater hosts Christmas events or more regular film showings.

“It just depends on what we can do safely and financially,” Stafford said.