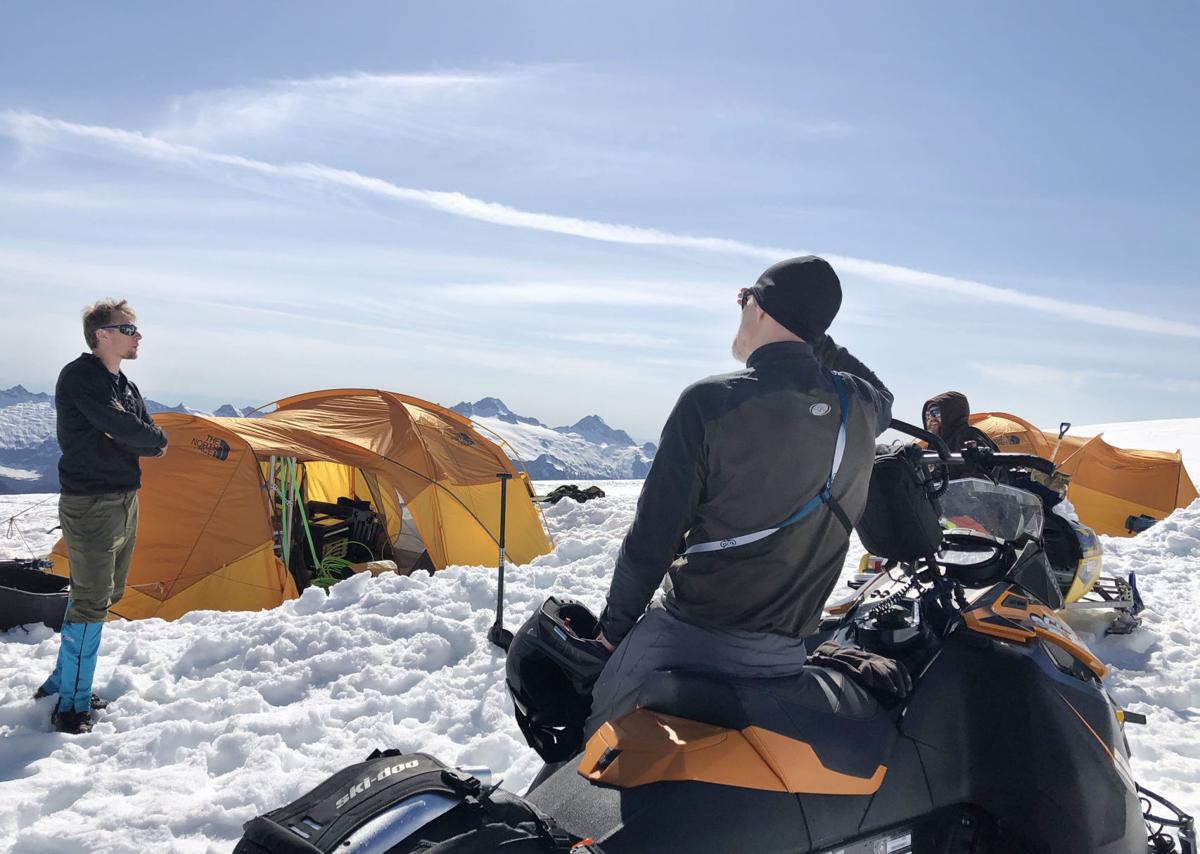 Chief mechanical engineer Justin Burnett (left) looks out over the camp that he and fellow University of Washington researchers occupied on Easton Glacier on May 9-11 while a Northwest Glacier Cruisers club member who helped transport the research team looks on. 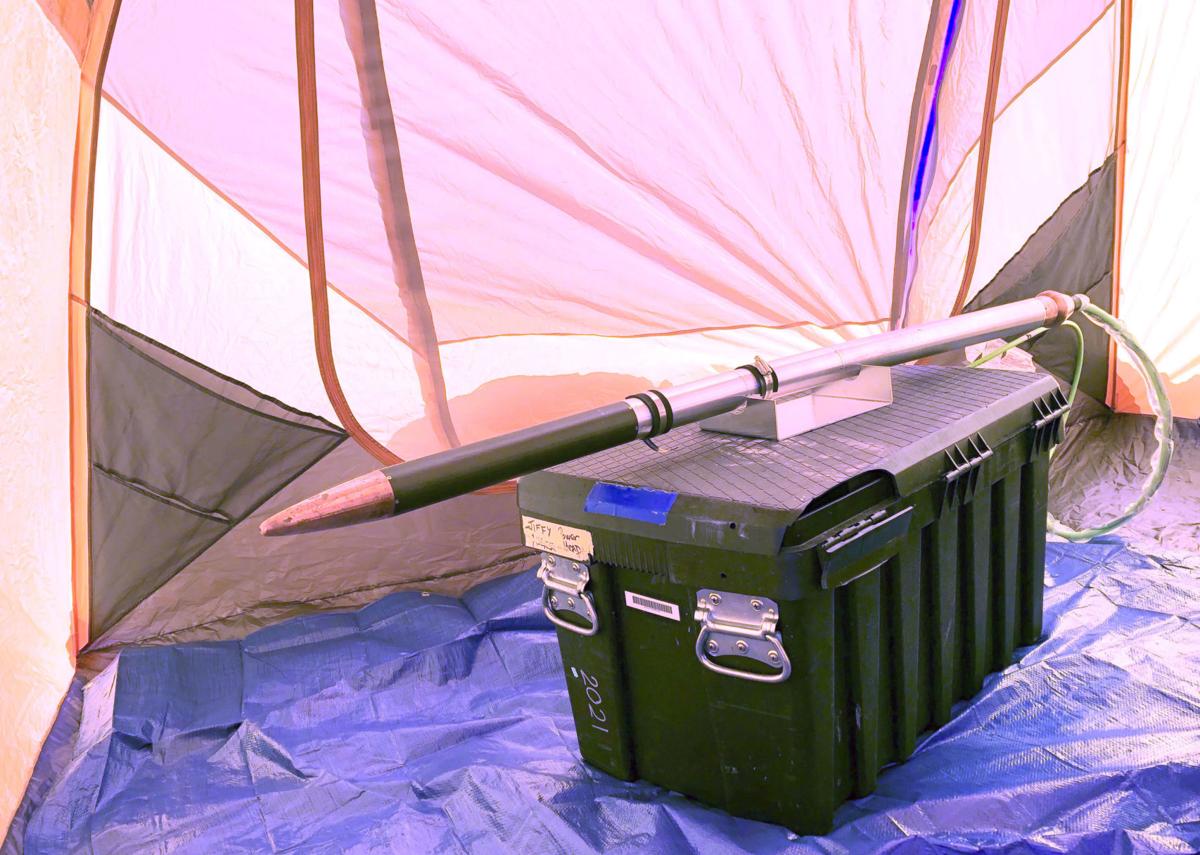 The latest model of the Ice Diver, an ice probe being developed at the University of Washington’s Applied Physics Laboratory, rests atop its case during a test run in May at Easton Glacier. 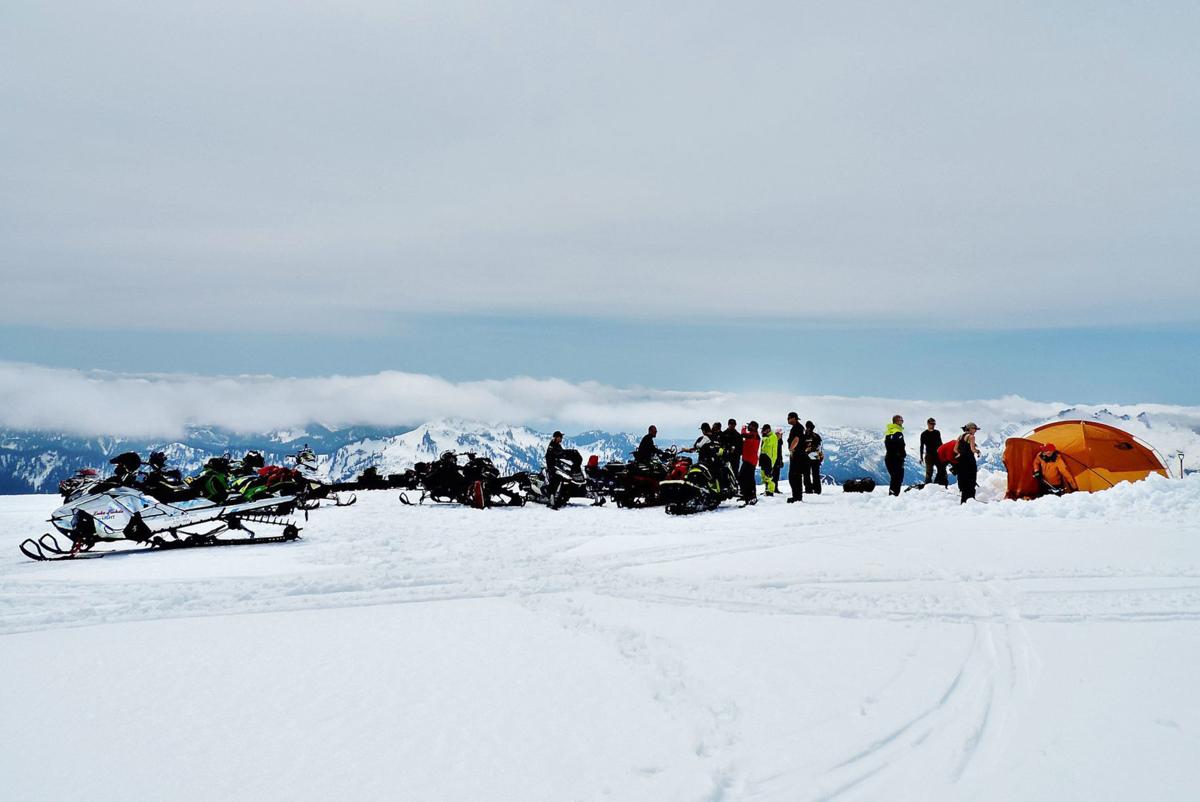 University of Washington researchers (right) set up camp at Mount Baker’s Easton Glacier in early May after several members of the Northwest Glacier Cruisers snowmobile club transported them to their icy destination. 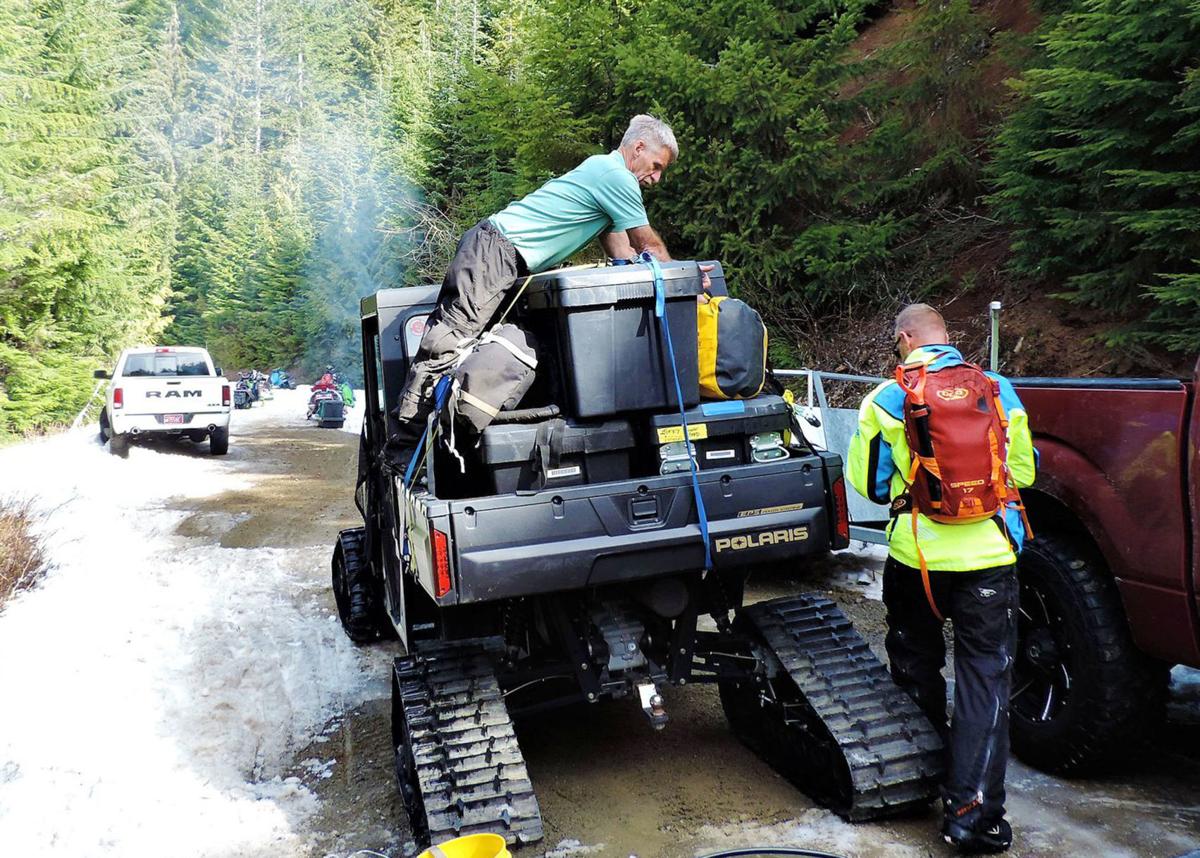 Members of the Northwest Glacier Cruisers, a local snowmobile club, load a rig May 4 with equipment needed by University of Washington researchers.

Chief mechanical engineer Justin Burnett (left) looks out over the camp that he and fellow University of Washington researchers occupied on Easton Glacier on May 9-11 while a Northwest Glacier Cruisers club member who helped transport the research team looks on.

The latest model of the Ice Diver, an ice probe being developed at the University of Washington’s Applied Physics Laboratory, rests atop its case during a test run in May at Easton Glacier.

University of Washington researchers (right) set up camp at Mount Baker’s Easton Glacier in early May after several members of the Northwest Glacier Cruisers snowmobile club transported them to their icy destination.

Members of the Northwest Glacier Cruisers, a local snowmobile club, load a rig May 4 with equipment needed by University of Washington researchers.

Members of a local snowmobile club recently helped scientists reach Mount Baker’s Easton Glacier, lugging a University of Washington research team and its equipment over sometimes difficult-to-navigate terrain on the south side of the mountain.

The researchers were using Easton Glacier to test a tool being developed for use in remote locations of the Arctic and Antarctic — and potentially outer space.

“We’re working with an international community of scientists, both those who study the Earth’s ice sheets and those who are interested in studying ice in the outer solar system,” said Dale Winebrenner of the University of Washington and lead scientist on the research project.

Winebrenner works at the university’s Department of Earth and Space Sciences and in the Applied Physics Laboratory.

He said the team the snowmobile club transported to Easton Glacier in May has been working for years to develop a tool that could bring more lakes beneath the Antarctic ice sheets and oceans hidden under the ice on distant moons within reach.

There’s much interest — including from government organizations such as NASA — in being able to probe into and under ice at a low cost so that more of the Earth’s polar ice caps and potentially other planets and moons can be examined.

“High-cost methods can never sample very many places because there aren’t enough resources to do that,” Winebrenner said. “But there are many scientific questions that require being able to do that in many places.”

Those questions include how ice sheets melt and move, as well as what kind of microbial life may be hidden in water beneath ice in the Antarctic or on Jupiter’s moon Europa.

With those kinds of questions in mind, Winebrenner and others have been working to develop an ice probe that can reach deeper using electrical power — a tool they are calling the Ice Diver. Its development is supported by NASA and the National Science Foundation.

This year, Easton Glacier offered a comparatively easy-to-access location for testing two models of the probe.

“That glacier offers a very nice spot for us where there are not many big cracks in the ice and it’s relatively a safe place to work, at the right altitude, and the ice is about at the right thickness,” Winebrenner said. “And it’s one of the home territories of the snowmobile club where they really know where they’re going.”

Winebrenner, along with another biologist, two engineers, camping gear and the about 5.5-foot-long probe, needed help making the journey from the Schriebers Meadow area to their destination on the glacier — a trip that involved navigating an ice bridge over a stream.

“Just getting them and their gear up to the glacier is our job,” Northwest Glacier Cruisers secretary Tina Shields said, adding that the destination is at an elevation near 8,000 feet.

Winebrenner said the Northwest Glacier Cruisers have helped his team before. In 2012, a group from the club carried the research team and equipment to Easton Glacier for testing of an earlier model of the Ice Diver probe.

“They’re remarkable can-do people, and what they can do is impressive,” Winebrenner said. “From several standpoints, we couldn’t have done it (the latest test at Easton Glacier) without them.”

Northwest Glacier Cruisers members helped deliver research equipment to the glacier the first week of May, as well as take the research team to and from their icy camp on May 9 and 11.

Winebrenner said the club is also credited with helping secure some of the National Science Foundation funding that has supported development of the Ice Diver, since it hinged on having access to areas where the developing technology could be tested.

“The National Science Foundation wants to find new knowledge about the world,” Winebrenner said. “Their key aim is to develop this technology as quickly as possible so we can make measurements in the great ice sheets of Greenland and Antarctica.”

The National Science Foundation has provided funding for including a fiber optic cable with the probe. Winebrenner said the cable can act as a string of thermometers.

NASA’s focus is more on discovering whether and what varieties of life can be found in the about 400 lakes beneath the deepest portion of Antarctic ice.

“They are some of the last places on Earth that no one has been yet,” Winebrenner said.

NASA also has an interest in discovering whether the oceans known to lie beneath ice on the moons of Jupiter and Saturn have life hidden in them.

“If we ever want to go explore those oceans in the outer solar system, we’re going to have to have a way to get to them,” Winebrenner said. “So it could be that this probe we’re developing ... could land on one of these moons and be used to travel down to the ocean.”

As the research team continues fine-tuning the Ice Diver, the group plans to work with Canadian colleagues as early as next year to test it in the Arctic.

“Within a few years, three or four, we may have this probe into the first of the subglacial lakes that we can explore,” Winebrenner said.