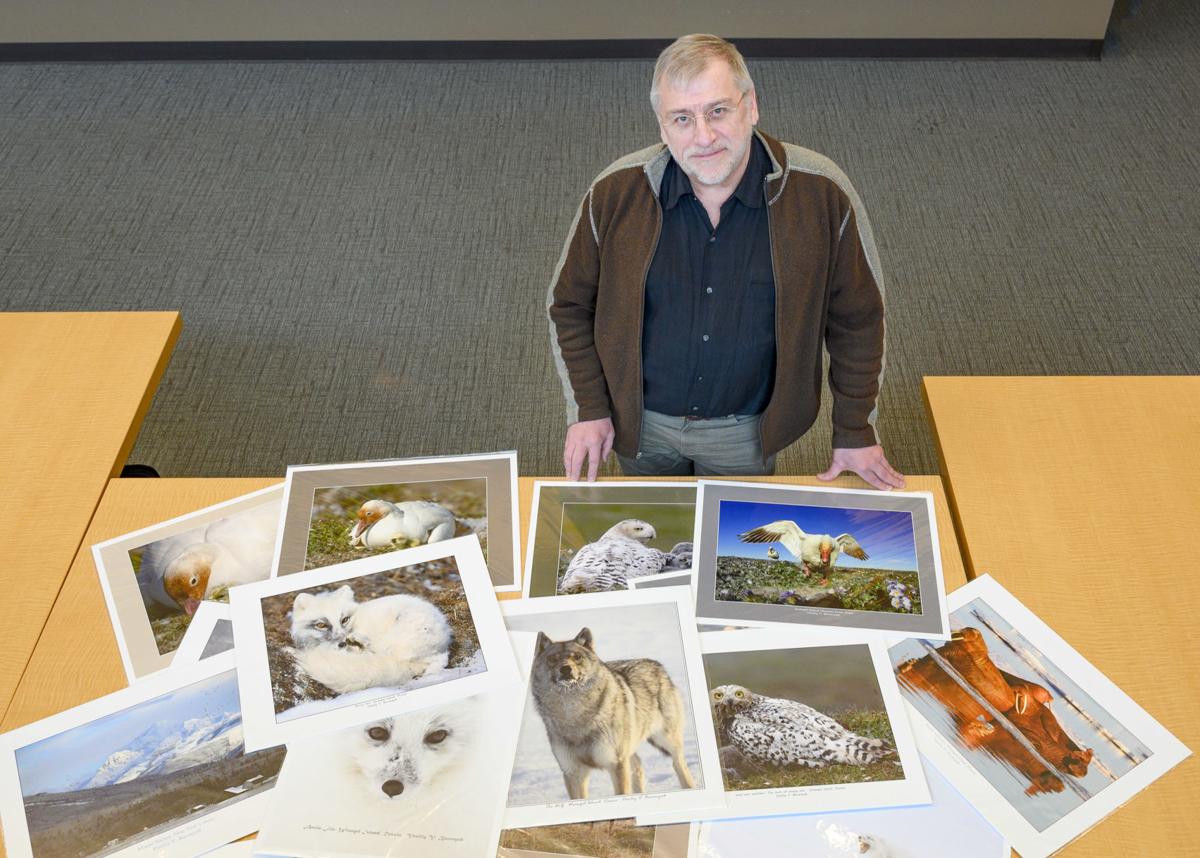 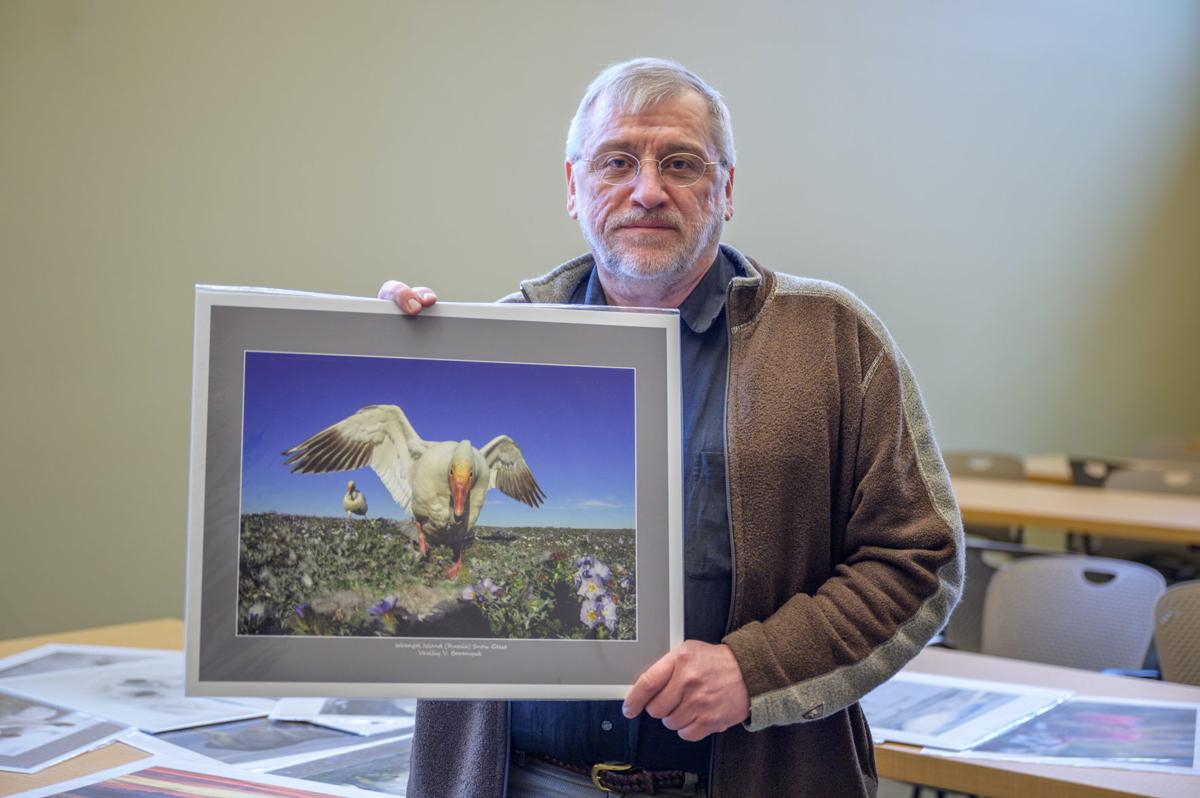 Biologist and photographer Vasiliy Baranyuk shows a photo of snow geese on Wrangel Island on Tuesday at Skagit Publishing in Mount Vernon. 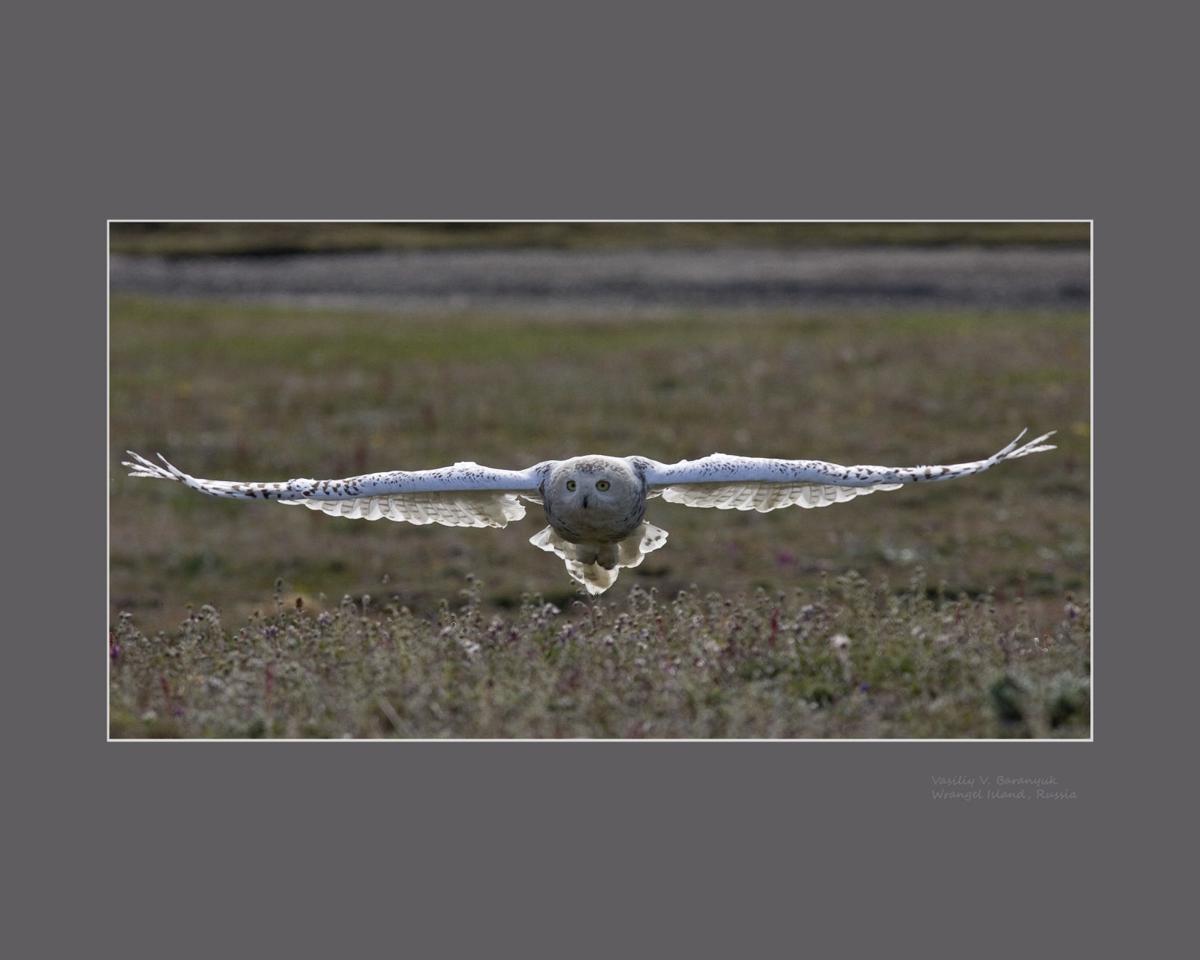 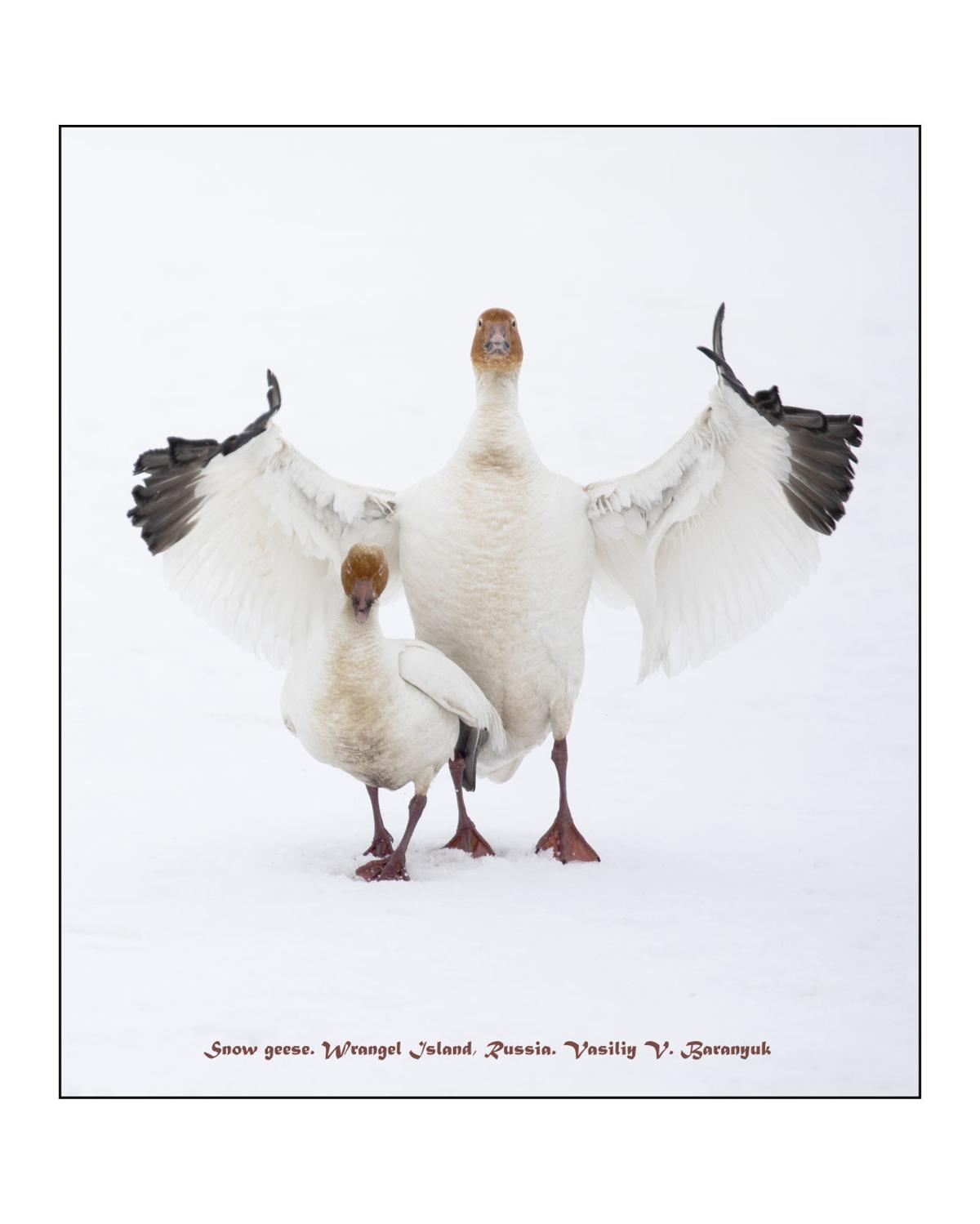 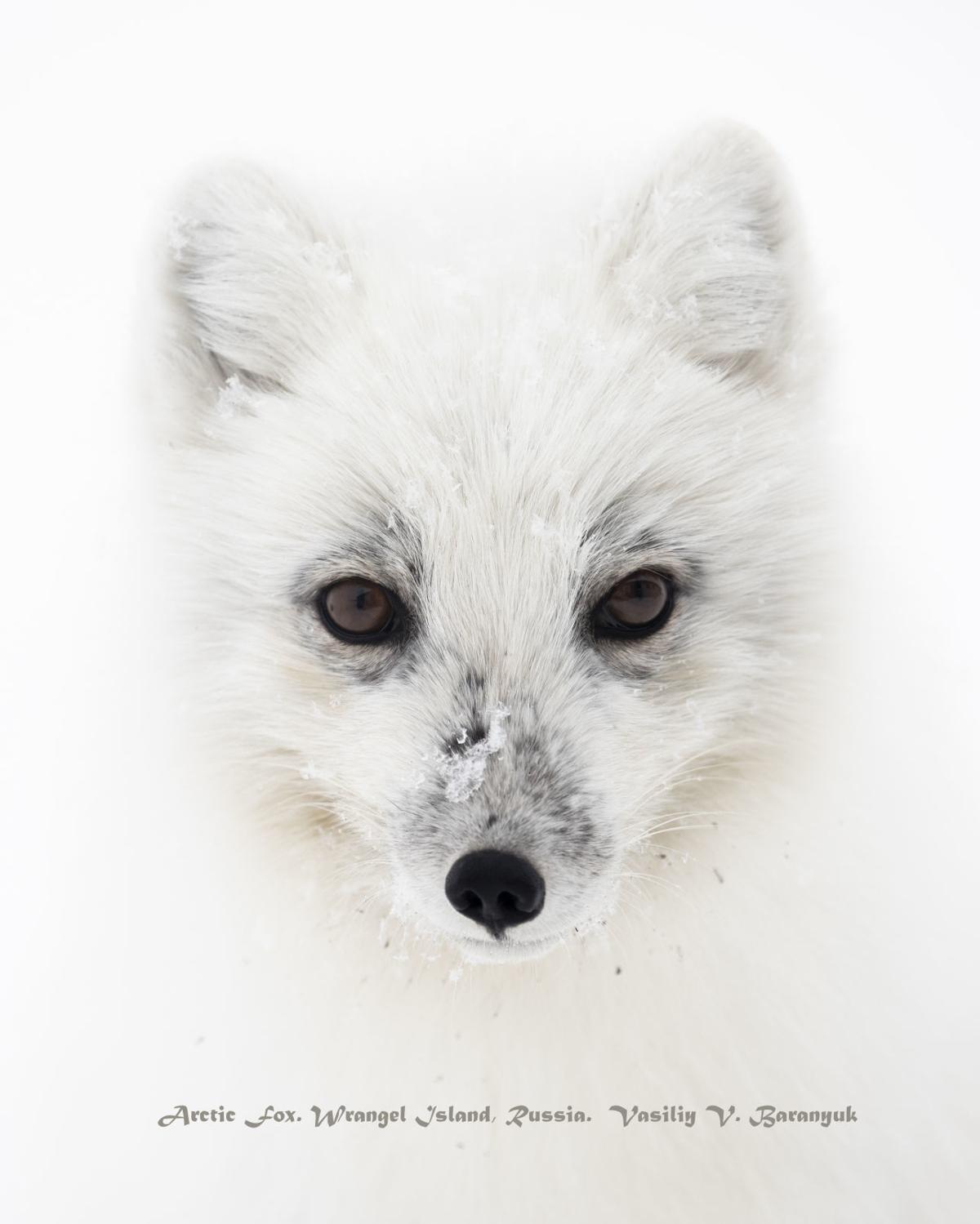 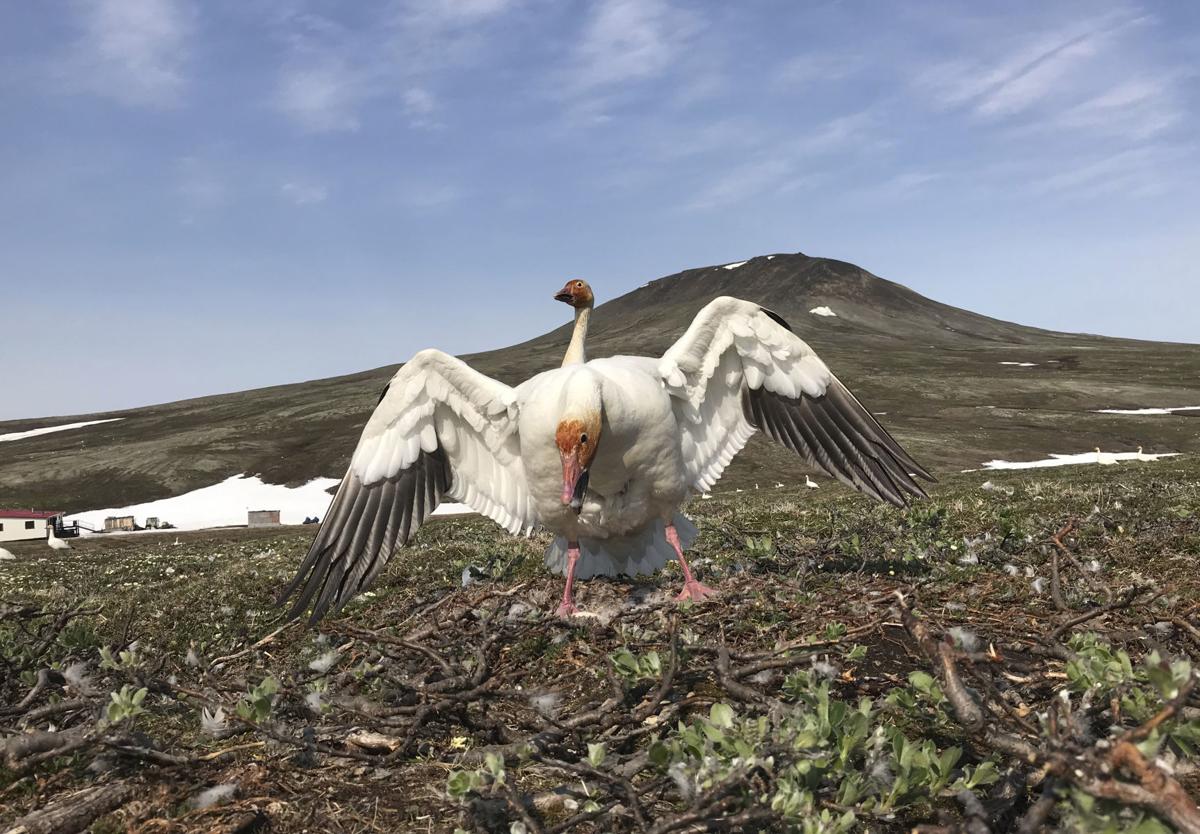 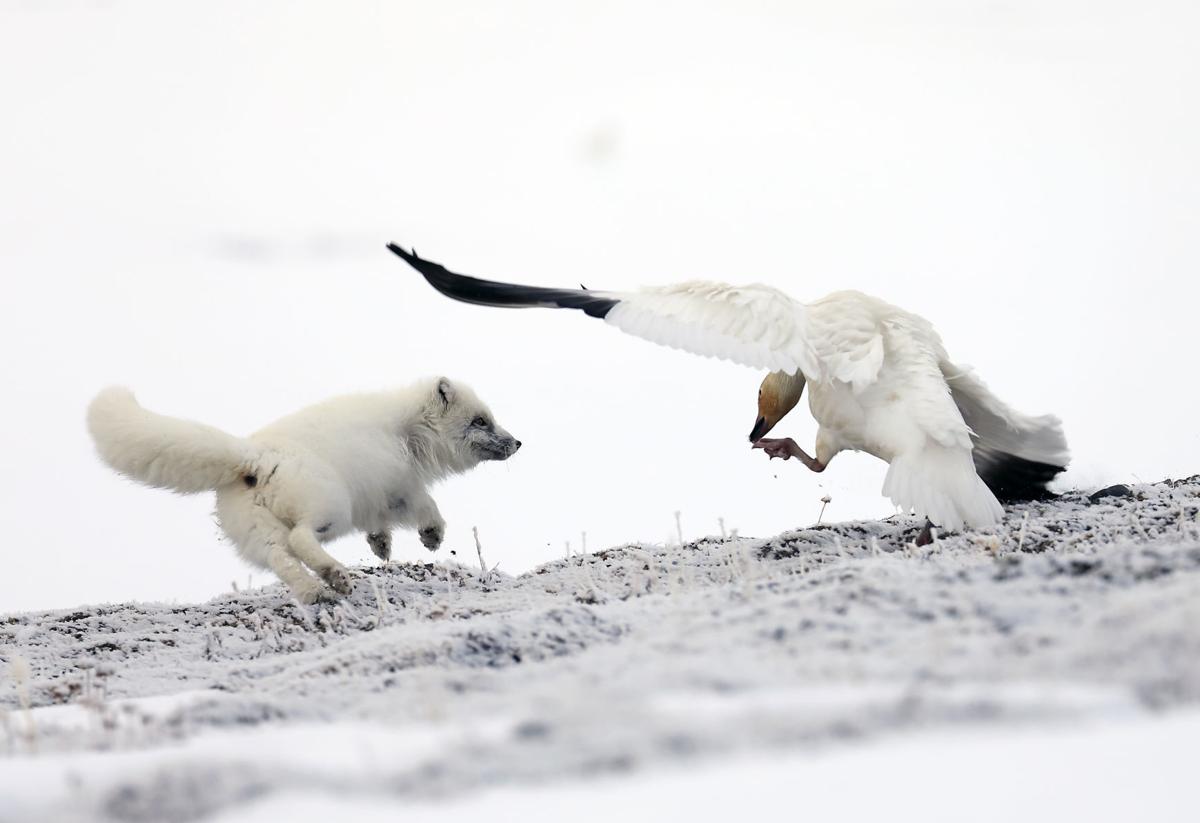 Biologist and photographer Vasiliy Baranyuk shows a photo of snow geese on Wrangel Island on Tuesday at Skagit Publishing in Mount Vernon.

When he was younger, Baranyuk spent years at a time on Wrangel Island in Russia, where the birds spend the summer months. He has since learned that to truly understand snow geese, one must tag along when they head south.

And thus, Baranyuk has once again returned to the Skagit Valley.

“He does both ends of the migration,” said Maynard Axelson, a member of the Washington Brant Foundation, which is sponsoring a presentation Monday by Baranyuk. “To have studies on both ends of a migration that spans two different countries is a big feat. It’s unreal. It takes a tremendous effort. It shows how important this shared resource is.”

The very geese now frequenting the fields and waterways of the Skagit Valley, Baranyuk has studied and photographed for 40 summers on remote Wrangel Island.

For his research, he has often single-handedly coraled, banded or attached transmitters to thousands of geese. He had tracked them all the way to the cornfields of Nebraska.

“He just makes a tremendous effort to do everything,” Axelson said. “He talks to everyone. He has done hundreds of presentations. He has traveled to Arizona and New Mexico, educating and informing people about snow geese.”

Wrangel Island is in the Arctic Ocean, situated between the Chukchi and East Siberian seas. It boasts the highest density of polar bear dens anywhere, has the most plant life of any arctic area and is the last place on earth to have a thriving woolly mammoth population.

And it is where Baranyuk arrived in 1981 to work at the Wrangel Island National Reserve.

“Wrangel Island, it is unique,” Baranyuk said. “It is tough, cold. But through my eyes, very attractive. Lots of animals. Animals are very close.”

On summer, Baranyuk went 87 days without seeing another person on the island.

He said the numbers of snow geese are up despite rising temperatures.

There are other factors at work on the island, including fewer full-time inhabitants, a change in hunting regulations, a protection agreement between North America and Russia and a thriving wolf population. The wolves prey on the predators that prey on the snow geese.

“Management, protection, changes in ecosystem helped increase the numbers of geese,” Baranyuk said. “This is a cycle. Things change. I have seen change in numbers. Increases and decreases.”

“We are one planet,” he said. “Everyone and everything is connected. From Wrangel Island to here in Skagit Valley.”

What: "Warming in the Arctic: Snow geese and other wildlife of Wrangel Island," by Vasiliy Baranyuk