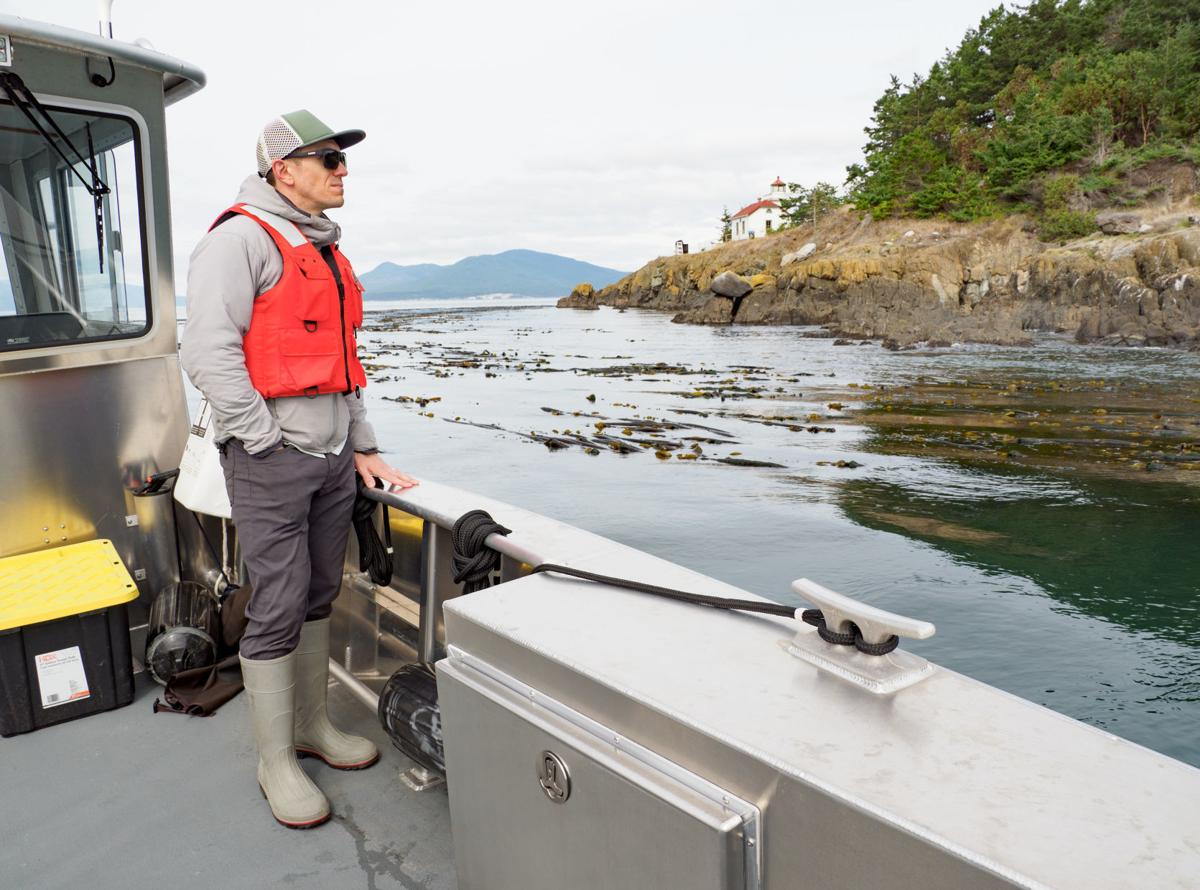 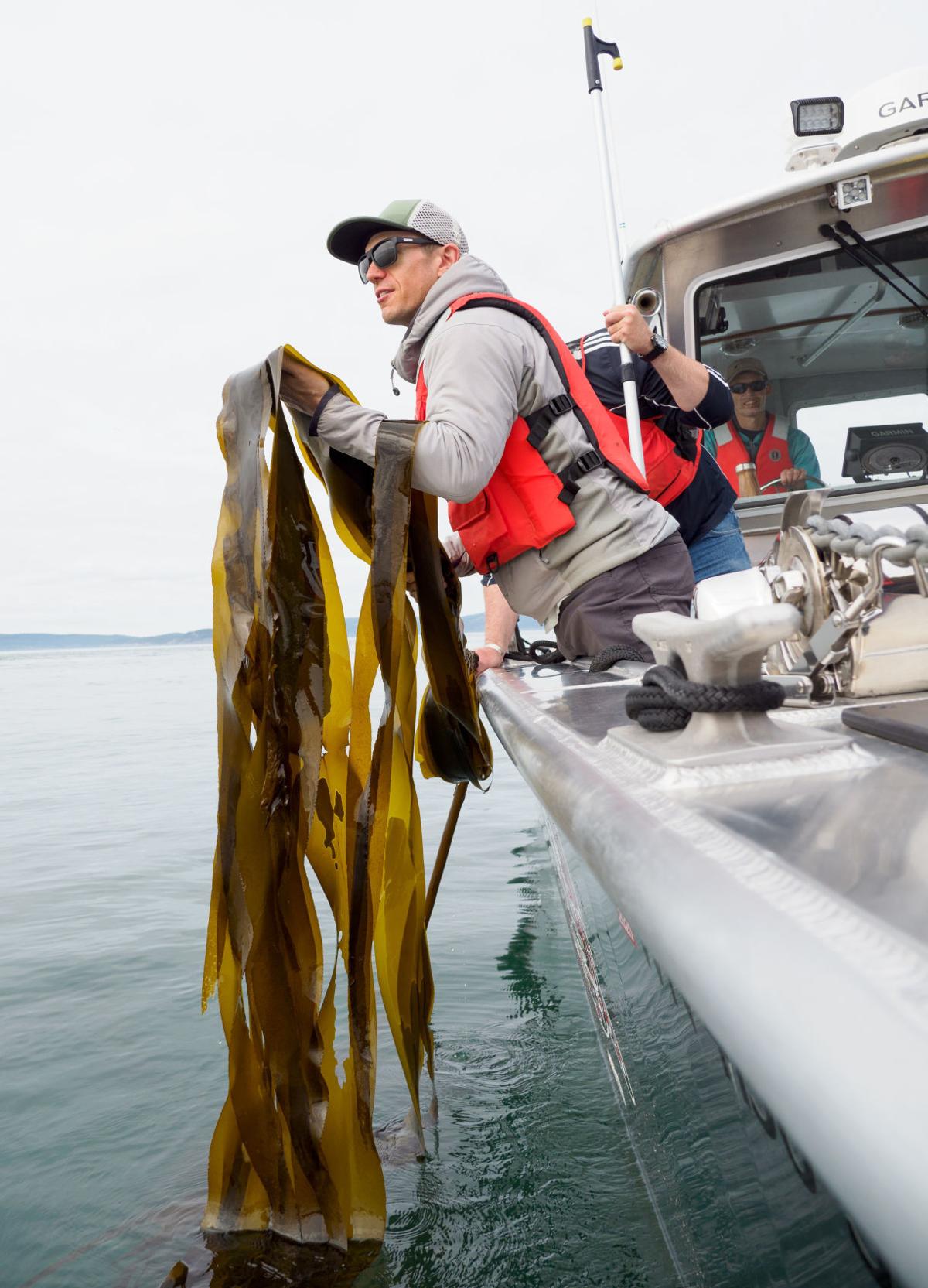 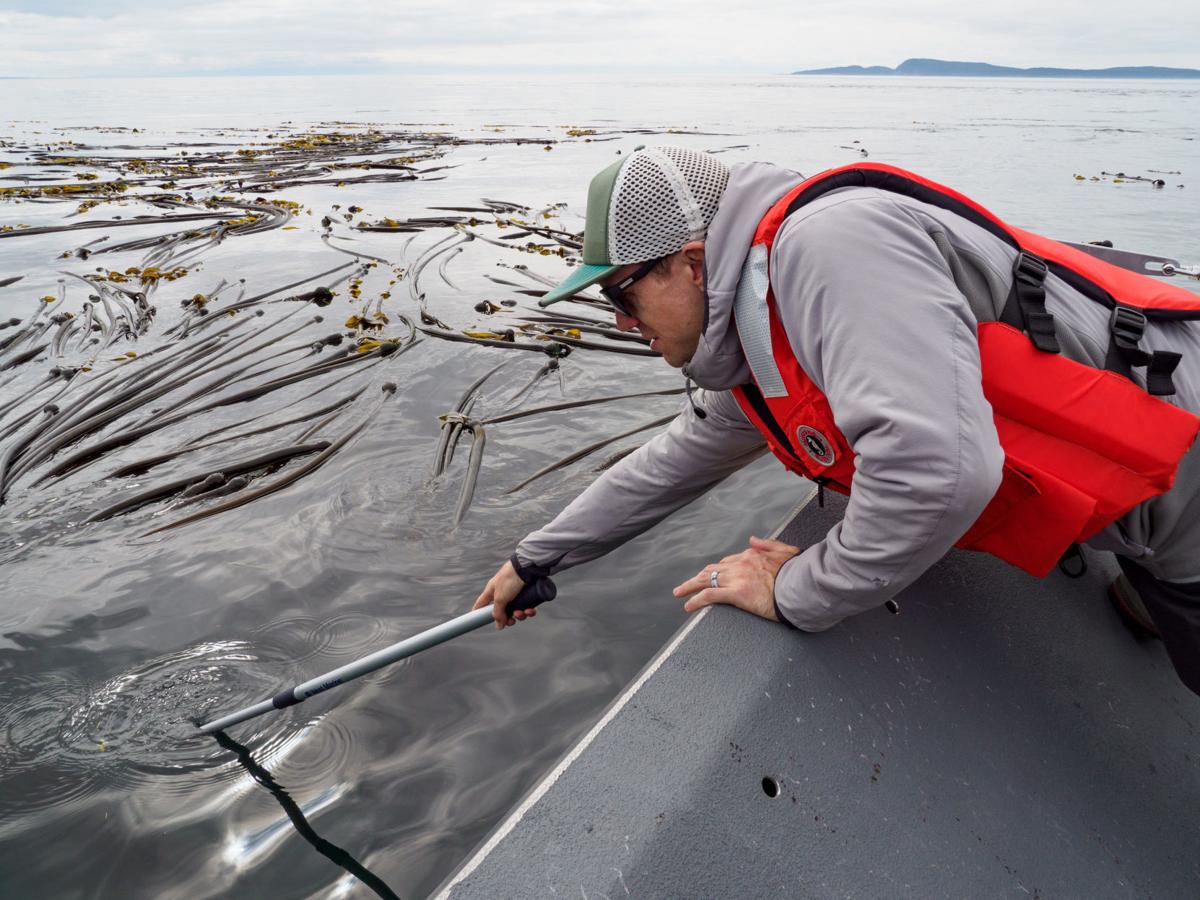 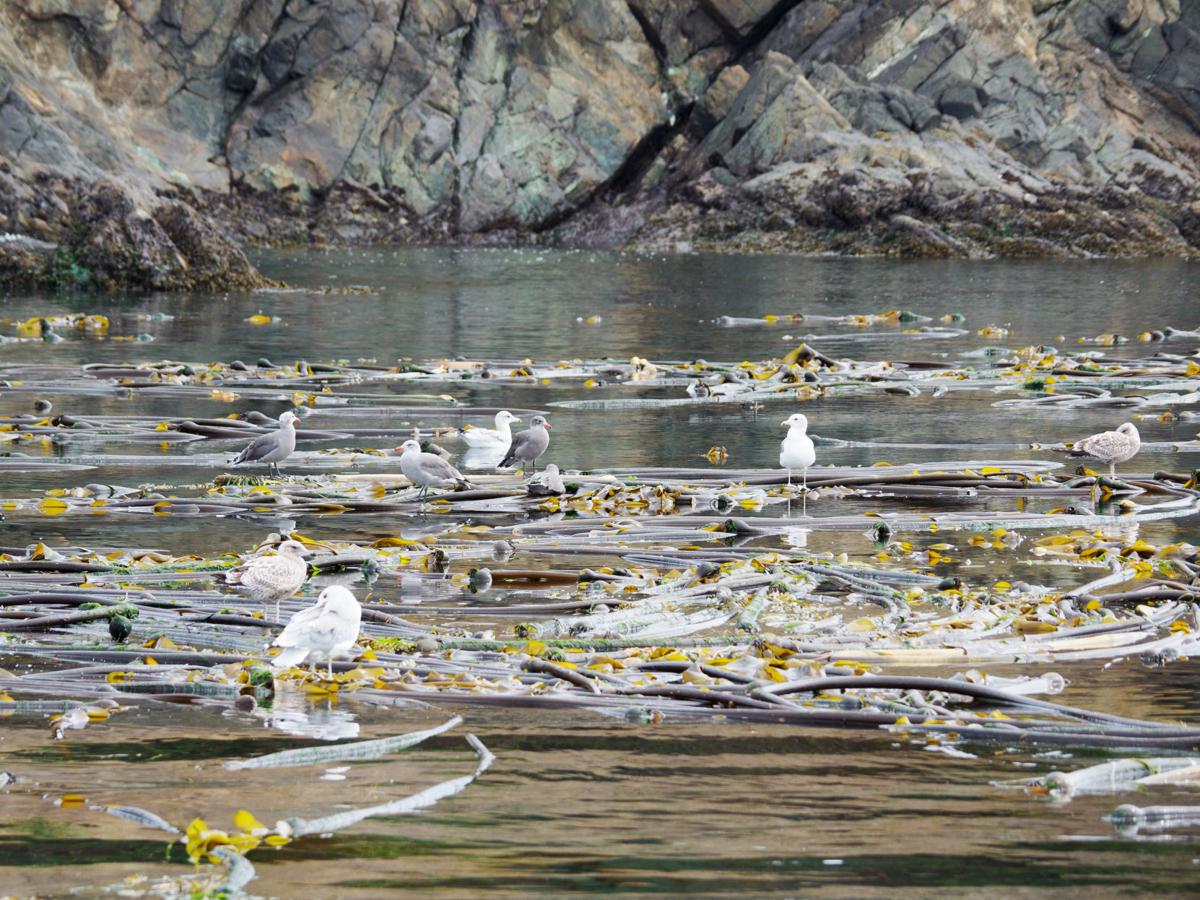 Seagulls find a resting spot Wednesday atop a bull kelp forest off the western tip of Burrows Island. 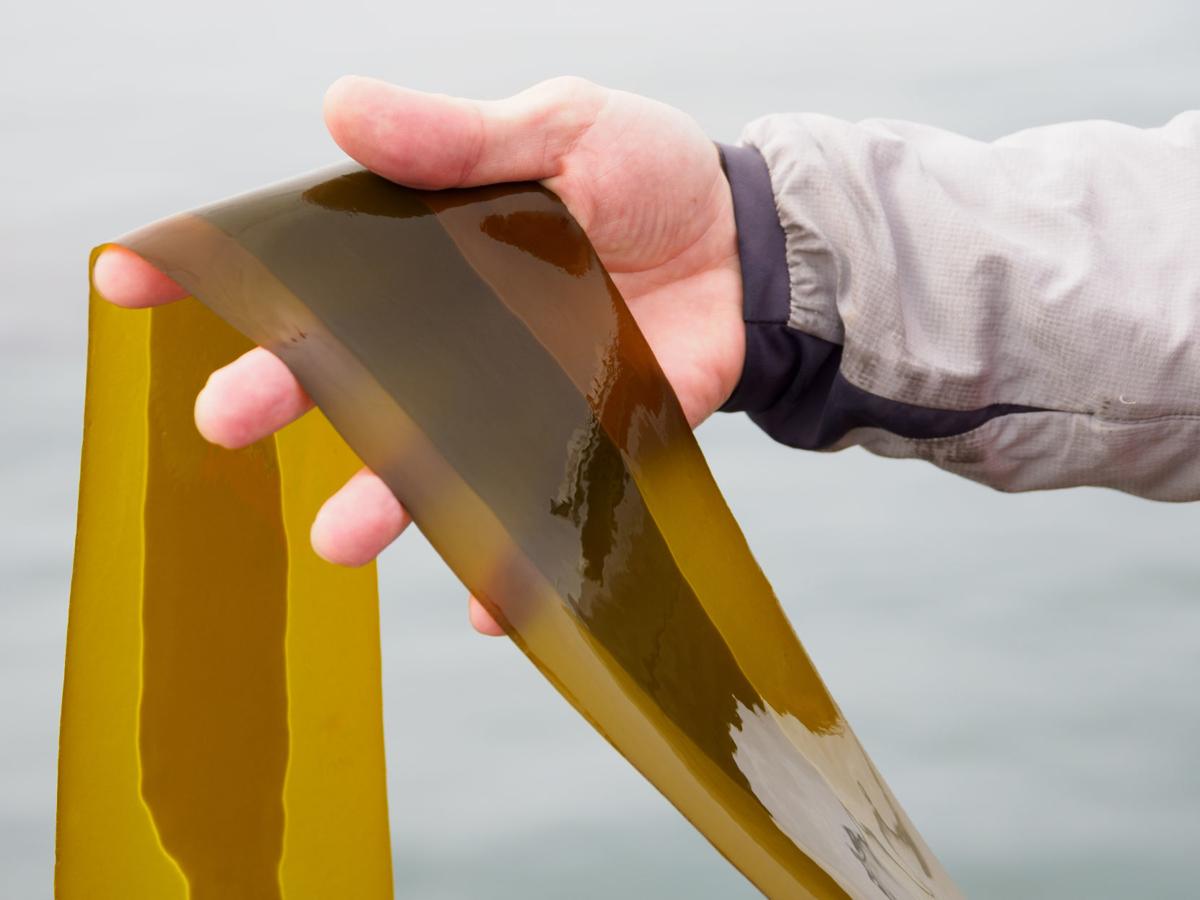 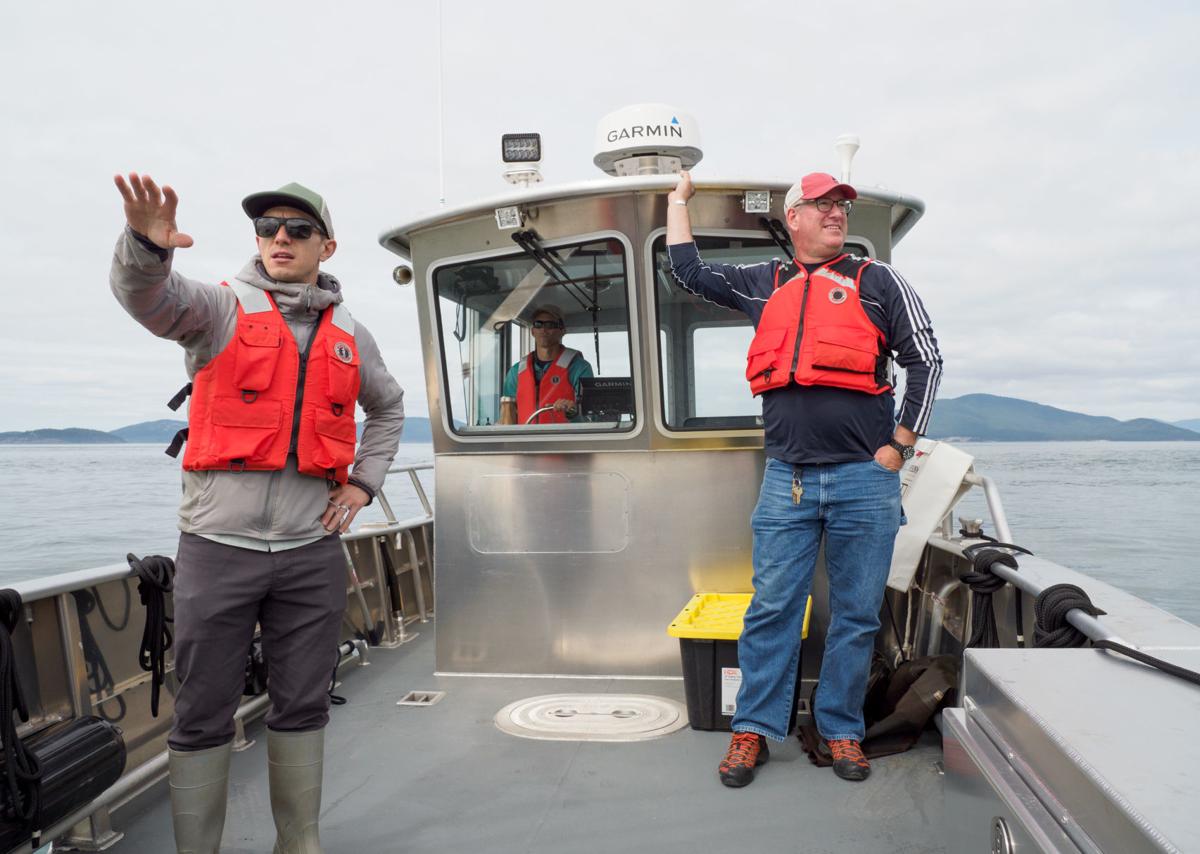 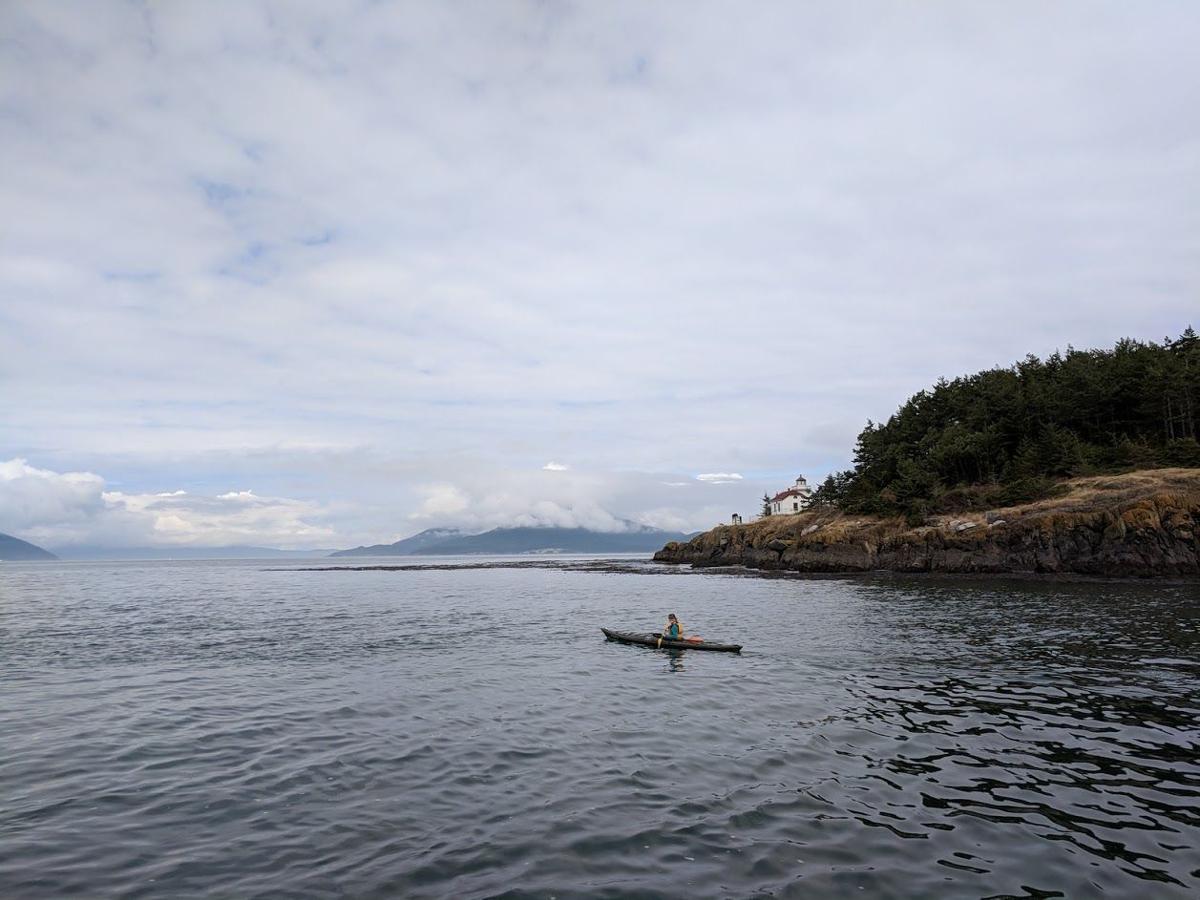 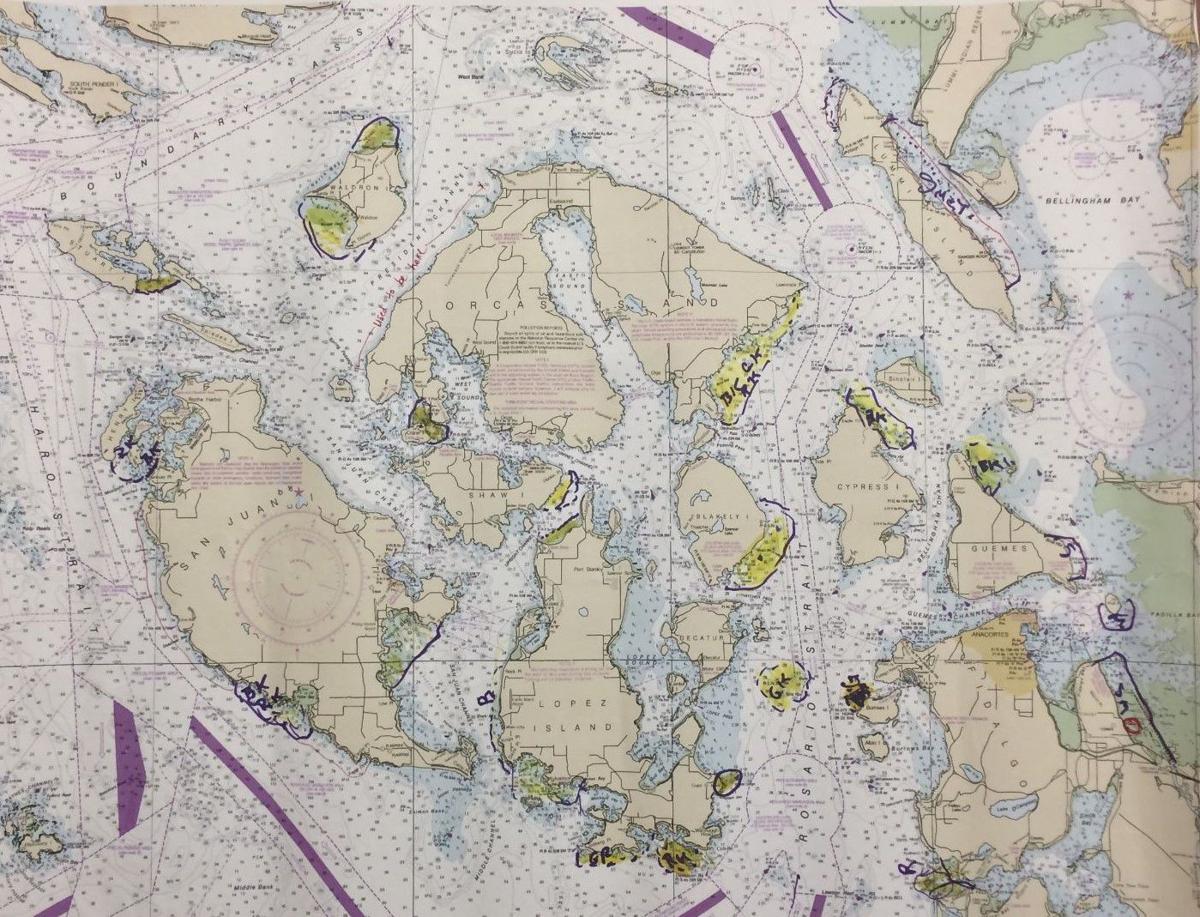 Two elders of the Samish Indian Nation depicted on this map where they recall seeing kelp beds while fishing over several decades. Casey Palmer-McGee, project manager for the tribe's kelp research, said there is no kelp left in some of those places. 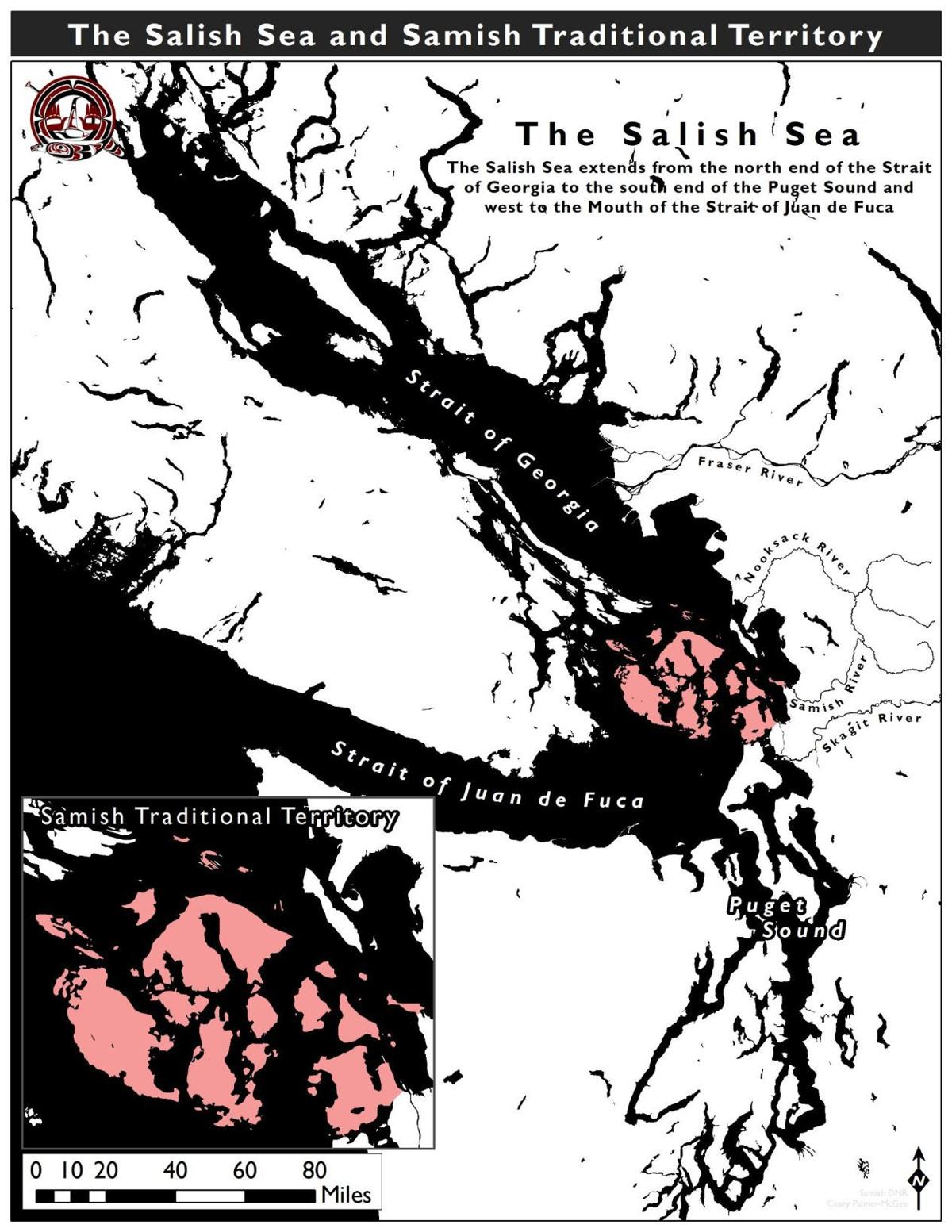 This map shows in red the reach of the Samish Indian Nation's Samish Traditional Territory. The tribe is helping to research the disappearance of bull kelp throughout the area and plan eventual recovery of the critical marine plant.

Seagulls find a resting spot Wednesday atop a bull kelp forest off the western tip of Burrows Island.

Two elders of the Samish Indian Nation depicted on this map where they recall seeing kelp beds while fishing over several decades. Casey Palmer-McGee, project manager for the tribe's kelp research, said there is no kelp left in some of those places.

This map shows in red the reach of the Samish Indian Nation's Samish Traditional Territory. The tribe is helping to research the disappearance of bull kelp throughout the area and plan eventual recovery of the critical marine plant.

BURROWS ISLAND — From the water’s surface, bull kelp looks like strands of other-worldly hair swaying in the water. From below, it looks like a palm tree — or dense forest of palm trees.

These underwater forests are important to many marine species and critical to endangered species such as Puget Sound rockfish and Southern Resident orca whales. These forests are also declining throughout the Salish Sea, prompting efforts to save them.

“We know there is cause for concern and we are losing kelp,” said Dana Oster, marine program manager for the Northwest Straits Commission.

The Samish Indian Nation is among those working to determine the cause of the decline of bull kelp and helping to plan how to restore these kelp forests.

The tribe started its research on bull kelp in Skagit and San Juan counties in 2016.

“It was a few years before that that we were hearing from tribal elders that they couldn’t find kelp leaves to wrap their salmon in for cooking for ceremonies,” Woodard said.

By examining aerial images taken 10 years apart, the tribe has documented a 36% decline in kelp around the San Juan Islands over that span. For the third summer, it is monitoring two Skagit County kelp forests by kayak, and is preparing underwater work in 2020.

The tribe is also active with the Salish Sea International Kelp Alliance and is providing insight for a Puget Sound Kelp Conservation and Recovery Plan. Both efforts are led by the Northwest Straits Commission and involve NOAA Fisheries.

“They’ve been very involved ... finding data gaps and determining what research we need to do now to preserve and protect kelp,” Oster said.

But Oster and Woodard said because significant losses have been documented in other areas of the Salish Sea, having local data available will help identify any sudden decline.

The Samish have taken a personal interest in evaluating the state of bull kelp in the tribe’s historical waters.

“There was a real data gap for Samish Traditional Territory, so we stepped in,” Woodard said.

Samish Traditional Territory extends from what is today western Skagit County and into the San Juan Islands.

“Here we are in the heart of the Salish Sea,” Casey Palmer-McGee, project manager for the tribe’s kelp research, said of the area’s importance to ongoing kelp studies.

The tribe began its work by gathering knowledge from elders who spent decades fishing among the islands.

On a map, the elders marked where they recalled seeing bull kelp. This insight suggests some bays may have completely lost kelp forests before research began.

To further investigate changes in the San Juan Islands, the tribe compared kelp forests shown in high-resolution aerial photos from 2006 and 2016.

Those photos — taken in 2006 by the nonprofit Friends of the San Juan Islands and in 2016 by the tribe — showed a 305-acre loss in kelp forests over those 10 years.

“The results were astonishing,” Palmer-McGee wrote in an online story map about the project.

The overall loss was 36%, although some islands lost more kelp along their shores than others. Patos Island, the northernmost in San Juan County, topped the list with a 77% decline.

Starting in 2017, the tribe joined ongoing research by kayaking the perimeters of kelp forests and using GPS to document their size.

That work, conducted largely by the seven county marine resources committees, began in 2015.

The Skagit County Marine Resources Committee joined in 2016 and now surveys three sites on the west side of Fidalgo Island — Coffin Rocks at the south end, Ship Harbor at the north end and Biz Point in between.

In an effort to extend the reach of that research in Skagit County, the tribe is monitoring kelp at the western edge of Burrows Island, in a spot southwest of Anacortes’ Washington Park across Burrows Pass, and along Reef Point on the southwest tip of Cypress Island.

The tribe selected the kelp forests at Burrows Island and Cypress Island because they’re two of the largest not being monitored by the Skagit Marine Resources Committee and are in remote areas volunteers are unlikely to be able to reach.

Oster said tribal staff conduct the Burrows and Cypress island surveys using the method of the marine resources committees and of an organization monitoring kelp along Canada’s Gulf Islands.

The timing of the surveys, during summer low tides, is important because the summer months are when kelp, which grows and loses its leaves annually, is at its thickest.

“It’s like deciduous trees: They lose their leaves and come back,” Palmer-McGee said.

When adorned with long leaves during the summer, kelp forests act as a safety zone for fish, a playground for orcas and a perch for birds. Kelp is also food for some species.

As Palmer-McGee lifted kelp from the water for a closer look Wednesday, a crab was seen clinging to its leaves.

“Something has been grazing that,” he said, pointing to a part chewed away by a marine animal.

The tribe will continue to document the bull kelp along Burrows and Cypress islands, and watch for changes that could be connected to water conditions or indicative of long-term trends.

Plans are underway for the Samish to go further in their research.

“We sort of have an idea of where it is and where it was, so the next step is to look at why it’s declining,” Woodard said.

The first week of September the tribe used funding from the U.S. Bureau of Indian Affairs to buy an underwater remote-operated vehicle equipped with a video camera.

After staff are trained on how to operate it, the remote-operated vehicle will be used next summer to examine the perimeters of kelp forests along Burrows and Cypress islands as well as in other areas of Samish Traditional Territory.

Woodard and Palmer-McGee said video taken will provide a first look at the conditions of the bottoms of the kelp forests and possibly shed light on what’s impacting the health of some of the forests.

If the rocky material that should provide a solid foundation for the kelp is buried in sediment, for example, or sea urchins that eat kelp are overly abundant, Woodard said that would suggest problems that could be solved.

While the remote-operated vehicle is a new tool that will soon be used, the tribe doesn’t plan to stop there.

Woodard said he wants to get tribal staff dive certified as early next summer. That would allow the tribe to get an even closer look at the kelp forests.

If the underwater efforts provide answers as to why some kelp forests have suffered while others have held steady, the tribe may be able identify areas where restoration can be tried.

Woodard and Oster said research is underway to determine how to grow bull kelp in the lab for transplanting in marine areas.

The tribe would welcome the opportunity to transport and place lab-raised kelp in local waters where kelp forests are lacking.

In addition to conducting research to help fill data gaps and taking part in discussions about how to save bull kelp, the Samish tribe hopes to instill in those involved the cultural significance of the marine plant.

“We’re trying to put together a big picture Salish Sea wide ... and we’re trying to incorporate indigenous information — knowledge and culture — into it,” Woodard said.

Kelp was once used to steam salmon over pit fires while providing salt and other nutrients to the meal, and was used to make such items as fishing line and containers.

It is also integral to the tribe’s legend about the Maiden of Deception Pass, who is said to live in the water with the marine life the tribe historically relied on for food.

“If you take care of the ocean, she makes sure there’s food to take care of your people,” Woodard said of the story.