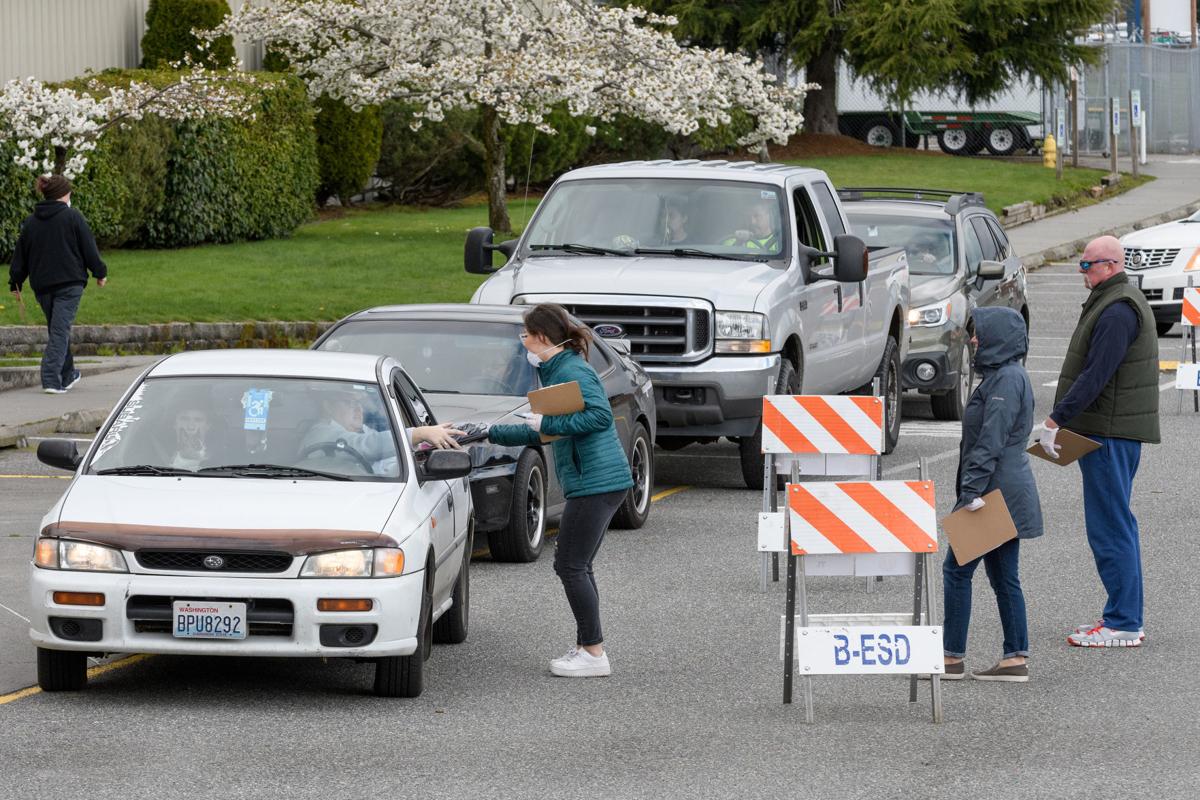 Yaritza Esqueda hands over a Chromebook and Wi-Fi hot spot Wednesday at Burlington-Edison High School. Chromebooks are being lent out by the district so students can continue with at-home education during the COVID-19 pandemic. 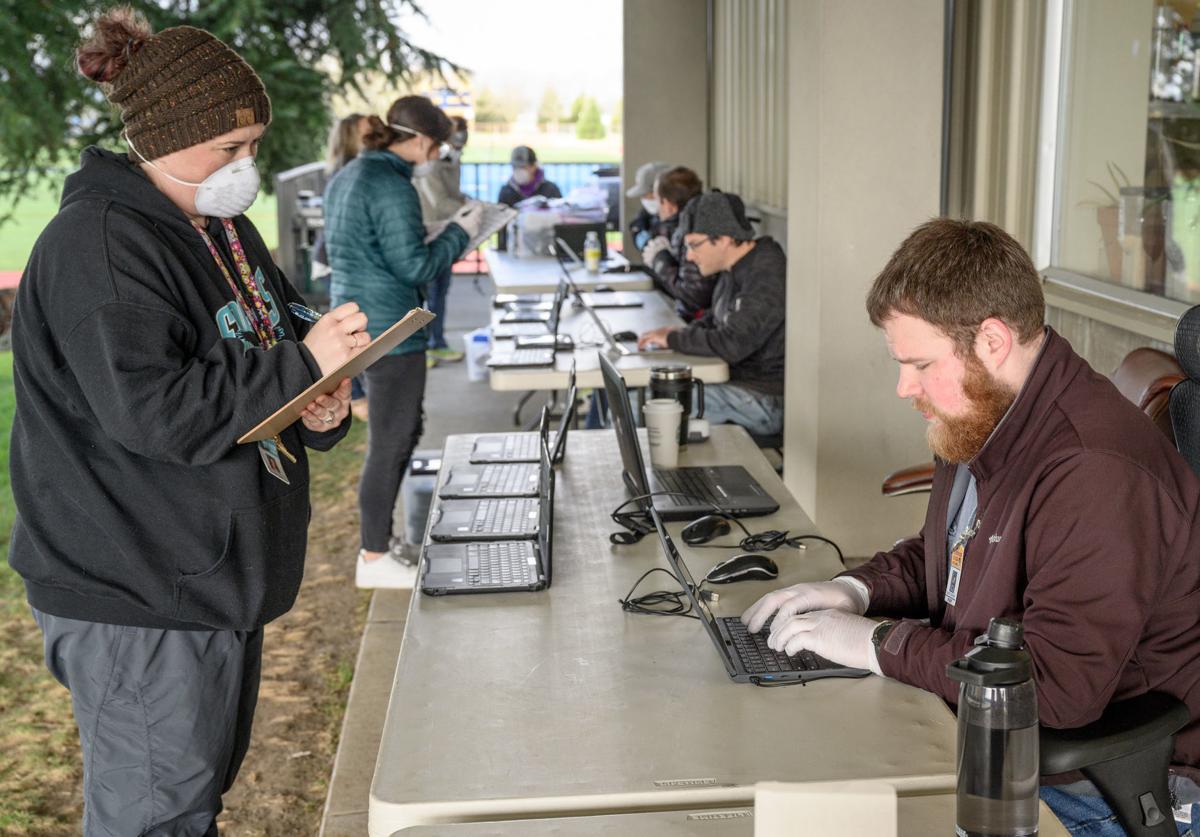 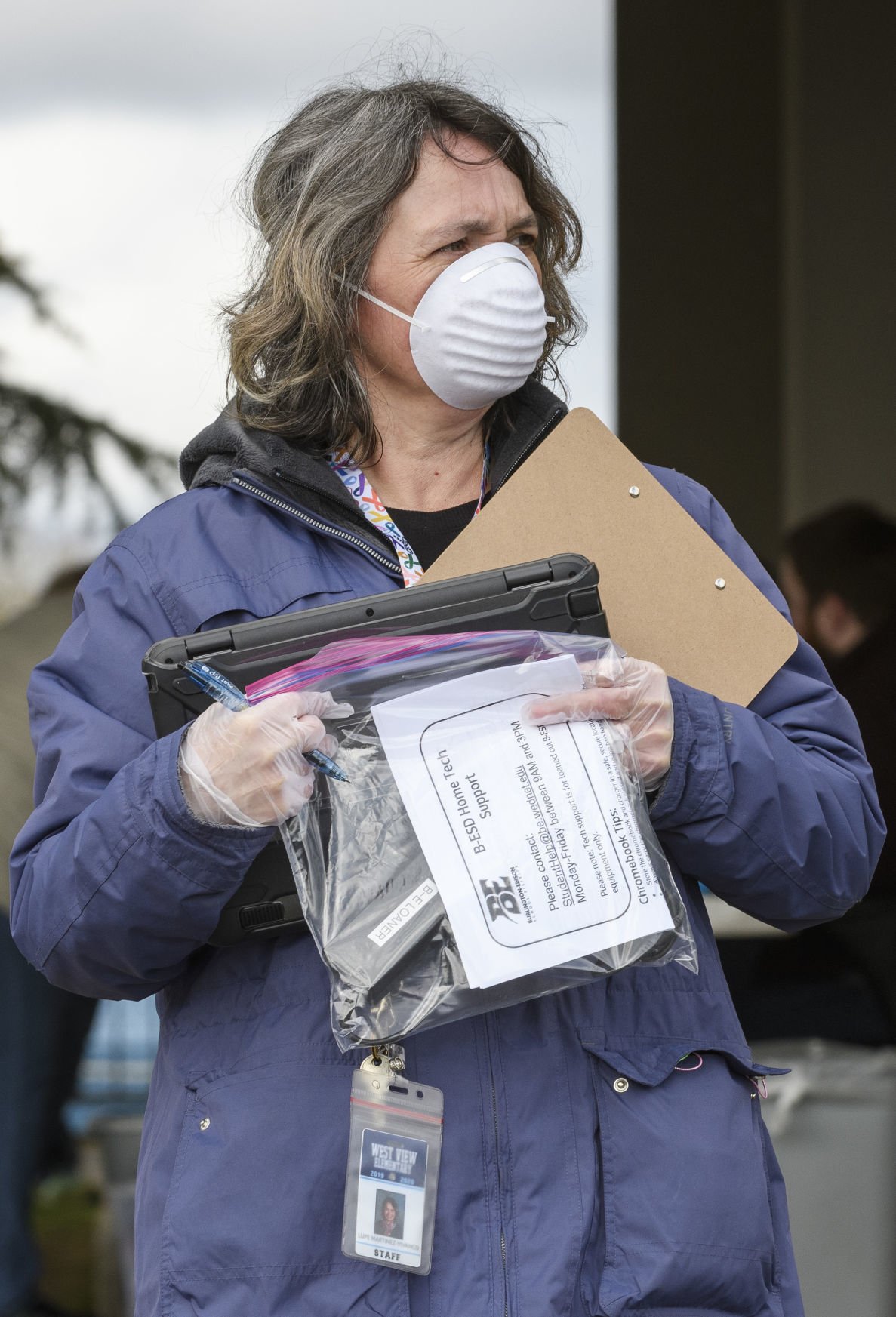 Lupe Martinez of West View Elementary School carries a bag of Wi-Fi gear and a Chromebook on Wednesday before handing them over to a student. 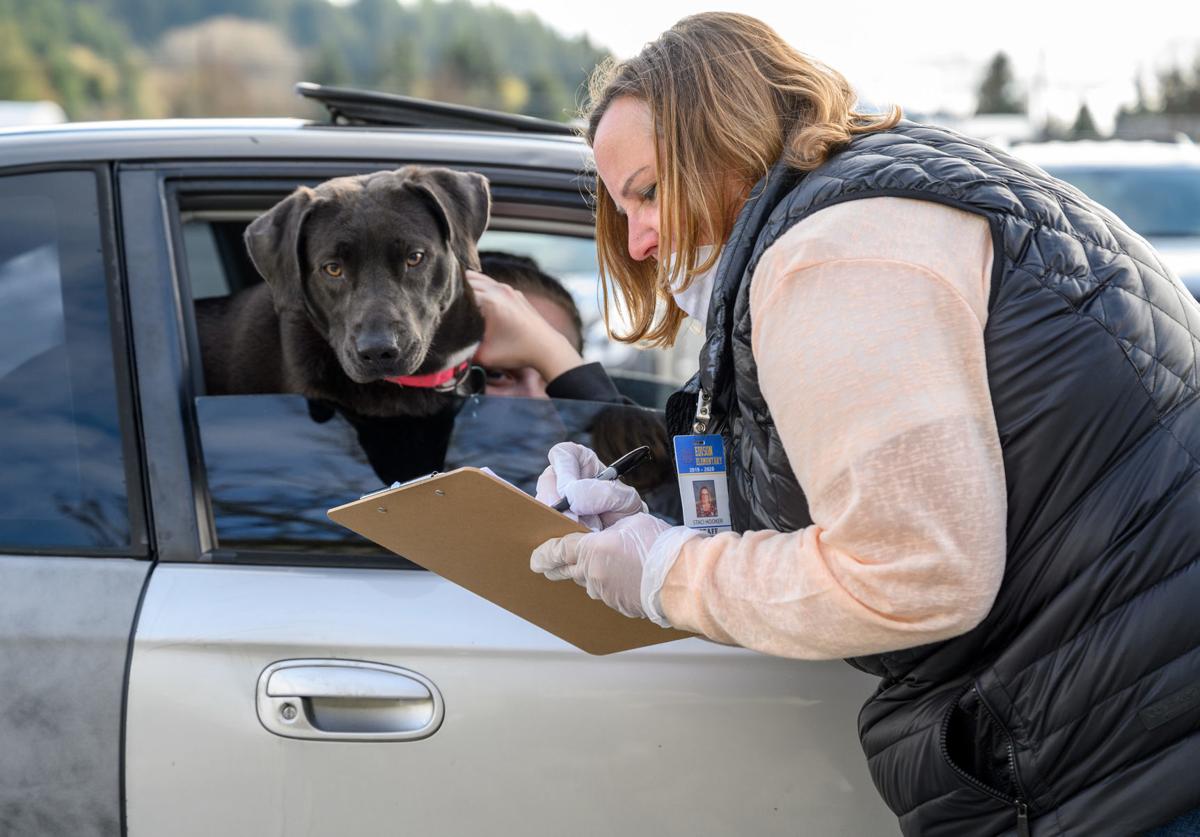 Staci Hooker of Edison Elementary School checks off a student’s name — while drawing a dog’s interest — before assigning the student a Chromebook on Wedneday. 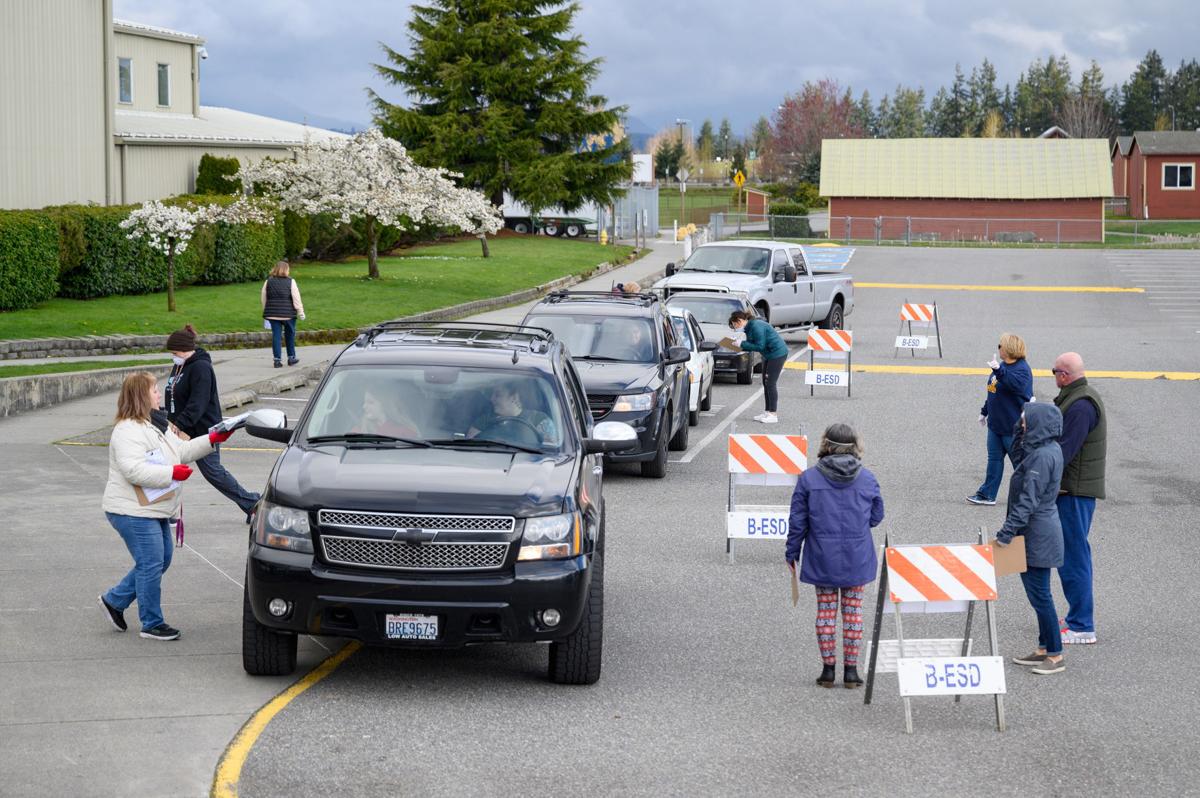 Vehicles line up Wednesday to check out Chromebooks and Wi-Fi hot spots at Burlington-Edison High School.

Yaritza Esqueda hands over a Chromebook and Wi-Fi hot spot Wednesday at Burlington-Edison High School. Chromebooks are being lent out by the district so students can continue with at-home education during the COVID-19 pandemic.

Lupe Martinez of West View Elementary School carries a bag of Wi-Fi gear and a Chromebook on Wednesday before handing them over to a student.

Staci Hooker of Edison Elementary School checks off a student’s name — while drawing a dog’s interest — before assigning the student a Chromebook on Wedneday.

Vehicles line up Wednesday to check out Chromebooks and Wi-Fi hot spots at Burlington-Edison High School.

The continued closure of schools throughout the state has caused school districts and teachers to get creative with how they interact with their students.

By the day after the shutdown, many teachers had found ways to keep in touch with their students via conferencing app Zoom, social media and other educational platforms.

“Our teachers are doing everything they can to create learning opportunities for our kids,” state Superintendent of Public Instruction Chris Reykdal said in a message uploaded to YouTube on March 27.

Though at first, the extent of any interaction was left up to individual school districts, by midweek of the first full week of closures the state Office of the Superintendent of Public Instruction issued a directive ordering districts to transition to what it called continuous learning plans by March 30.

That means every district has to provide some sort of learning opportunities for their students during the shutdown, which is expected to last until at least April 27.

The directive left many districts scrambling to get age-appropriate resources online and to find ways for teachers to connect with their students.

“The challenge there is that looks different in every district,” Concrete School District Superintendent Wayne Barrett said.

In his district, which is geographically large, rural and has spotty internet access, continuous learning is taking shape both digitally and in the form of packets that teachers are making for elementary school students.

For some of its older students, the district has been working to get Chromebooks into their hands, including by delivering the laptops at the same time it delivers daily meals.

“It presents challenges, but we’re doing the best we can,” Barrett said. “Because we’re a small district, we’re able to react to some of those things a little quicker.”

In the Burlington-Edison School District, continuous learning has evolved into what the district is calling its “4 R’s,” which stands for review, refresh, restore and reinforce.

“I think a real concern with this extended school closure is how do we continue to retain what we’ve built upon during this school year,” said Todd Setterlund, the district’s executive director of teaching, learning and communications.

Setterlund likened the fear that students will forget what they’ve learned to what is commonly referred to as “summer slide,” where over the summer students forget some of the skills and lessons they learned during the school year.

With a closure of at least six weeks, districts are now trying to prevent the same thing from happening.

Many, including in Skagit County, rolled out this week numerous online resources for students of all ages. In many cases, teachers will also be checking in with their students at least once a week either online or by phone.

“(We are) making sure students still know that we care about them and we’re thinking about them,” Setterlund said.

With more than half of its students in the free and reduced lunch program — a federal standard that measures a district’s poverty level — access to technology at home has proven to be a problem in the Burlington-Edison School District, Setterlund said.

As a result, the district hosted last week a technology check-out, where families of students in grades 5-12 were able to borrow a Chromebook from the district for the duration of the shutdown.

“We thought the most equitable way was to provide resources online and then to address the barriers of getting online,” Setterlund said.

After sending out questionnaires to families in the district about who would need the devices, the district had about 300 sign up as of Wednesday, said Tracy Dabbs, the district’s science technology consultant teacher.

“We’re just making sure everybody has access that needs it,” Dabbs said.

At 8 a.m. on Wednesday, a line of cars was waiting for the Chromebooks, she said. A steady stream followed.

Within a few hours, 100 Chromebooks had been picked up.

“Thanks to our tech levy, we have tons of devices,” Dabbs said.

The district was also giving out information about Comcast, which is providing families in need with free internet, she said.

Additionally, Dabbs said, any families without internet access can go to their closest school to access the building’s Wi-Fi.

The other Skagit County school districts are doing something similar to what Burlington-Edison and Concrete are doing.

“The shift to remote learning marks a big change for teachers, students and families, who are accustomed to an education system built on in-person, face-to-face relationships and interactions,” Mount Vernon School District Superintendent Carl Bruner said in a news release. “It will take all of us, working together, to make the new model successful.”

Parents, Bruner said, can help their children by encouraging them to check their school email accounts, asking to see their work, and reaching out to their teachers if they have questions.

“Be patient,” he said. “With your students, our teachers, and yourselves as we all learn to make remote learning effective.”

While the transition to online learning presents a challenge, Reykdal has said it is a good opportunity to begin to build an effective model that can be used in the future if needed.

It is not, however, the future of education in the state.

“This will not be a transition from our traditional basic ed model simply to an online,” Reykdal said. “In fact, most districts will not go purely online. That’s not the best education anyway for our kids because it doesn’t have the beautiful connection that public schools traditionally provide.”

That connection, Setterlund said, is what a lot of educators miss during the shutdown.

“Teaching is a very personal craft,” he said. “It’s the relationships that are most powerful. It’s hard to replicate that on a digital platform. It’s not just about sharing content and then asking students to share feedback. It’s the discussions, the relationship building, that is really key to learning.”