Seattle City Light runs the Gorge Powerhouse that generates power using water from the Skagit River at a site within the North Cascades National Park. 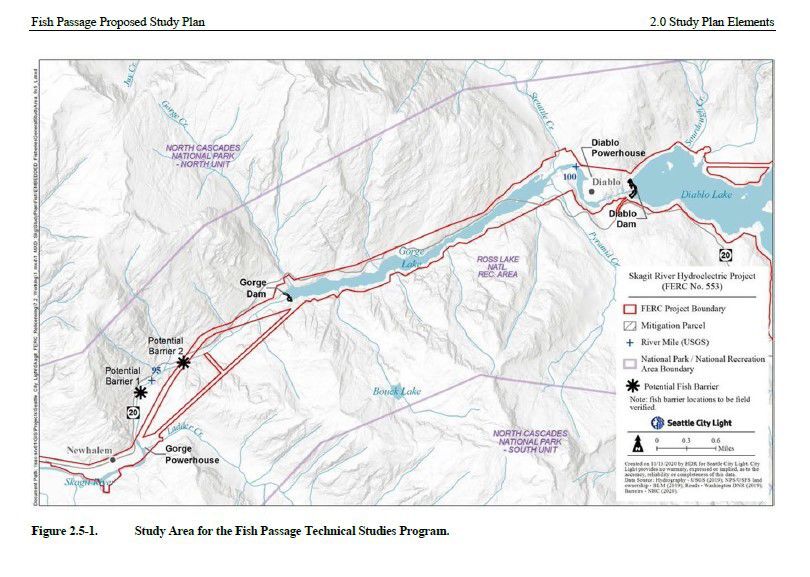 Seattle City Light runs the Gorge Powerhouse that generates power using water from the Skagit River at a site within the North Cascades National Park.

In response to requests from tribal, federal, state and local representatives, Seattle City Light will conduct some fish passage studies as part of the relicensing process for its Skagit River Hydroelectric Project.

Those are two of 28 studies included in Seattle City Light’s latest proposed study plan that was filed Tuesday.

Fish passage at dams is a growing concern throughout the Pacific Northwest. In the Skagit River watershed, the concern has grown since Seattle City Light’s last license was issued for its three dams upstream of Newhalem — as local salmon and steelhead populations have declined and gained Endangered Species Act protections.

Seattle City Light did not include fish passage in its original proposed study plan because it said it doesn’t believe fish have ever used habitat within the project area.

The Upper Skagit Indian Tribe, National Marine Fisheries Service and others say that a 1920s-era study that says that, and examinations that took place in the 1980s, decades after Gorge, Diablo and Ross dams were built, aren’t sufficient for drawing that conclusion.

“Given the uncertainty, we are proposing a programmatic approach to look at fish passage at the project, basically re-evaluating what was done in the 1980s ... between the Gorge Dam and the Gorge Powerhouse on the river,” Bearlin said. “There is some debate about the information.”

That 2.5-mile stretch between Gorge Dam and Gorge Powerhouse is referred to as the “bypass reach” by Seattle City Light. Its narrow, steep and rocky terrain is what had some convinced a century ago that fish couldn’t pass through the area.

Over the next few years, Seattle City Light proposes to take another look.

The Fish Passage Technical Studies will start with a field investigation of the bypass reach to re-evaluate whether it is passable for salmon and steelhead.

Should passage be found to be possible, computer modeling through the Skagit River Gorge Bypass Reach Hydraulic and Instream Flow Model Development Study will be used to evaluate what flows would be needed through the reach to support fish passage.

If fish passage is plausible under certain flow conditions and habitat in tributaries including Gorge and Stetattle creeks is deemed suitable for fish, improving fish passage at Gorge Dam may be considered.

The proposed studies will not consider removal of Gorge Dam — a request made by the Upper Skagit tribe — and is limited to areas below Diablo Dam.

“Existing information ... does not support the assertion found in some study requests that anadromous fish migrated upstream of the falls located just below the current location of Diablo Dam,” Seattle City Light’s proposed study plan states.

The county Board of Commissioners criticized that decision in its Wednesday letter.

“The Skagit tribes, NOAA Fisheries, the Washington Department of Fish and Wildlife, the U.S. Fish & Wildlife Service, Skagit County and others are requesting study of fish passage into the upper basin,” the letter states. “City Light continues to oppose this, belatedly offering to study fish passage only in the three-mile dewatered stretch below the lowest dam, Gorge.”