Repairs are under way Tuesday on the Skagit River Bridge. The state Department of Transportation has decided to raise the height of the metal truss structure over the existing portion of the bridge after the permanent fix for the collapsed portion is installed. 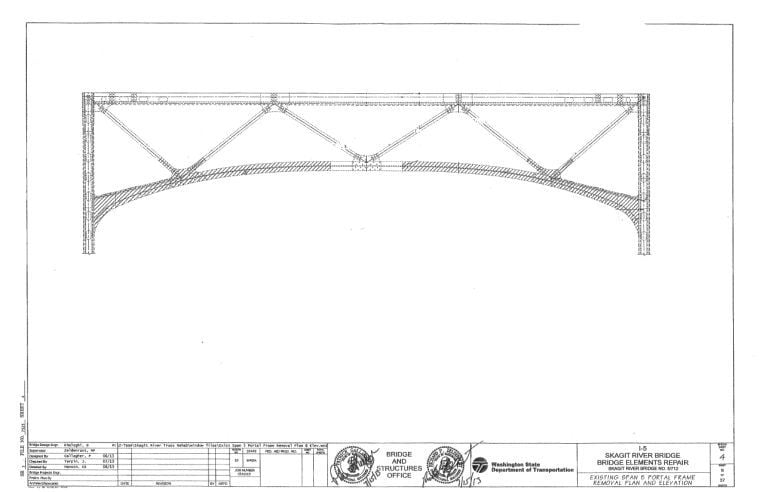 The current bridge trusses are higher in the center and lower on the ends. 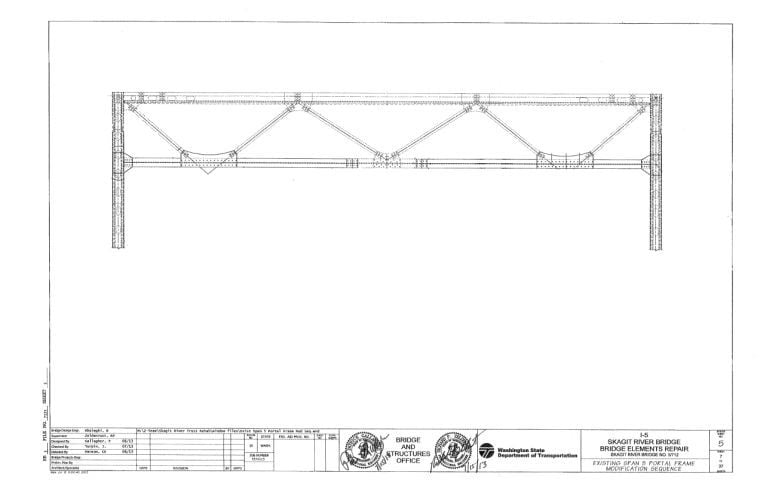 The new bridge trusses will be 18 feet off the roadway the entire width of the bridge.

Repairs are under way Tuesday on the Skagit River Bridge. The state Department of Transportation has decided to raise the height of the metal truss structure over the existing portion of the bridge after the permanent fix for the collapsed portion is installed.

The current bridge trusses are higher in the center and lower on the ends.

The new bridge trusses will be 18 feet off the roadway the entire width of the bridge.

MOUNT VERNON — Over the years, tractor trailers and their loads have struck overhead trusses on the Skagit River Bridge on Interstate 5.

That era may be over after a $2.5 million to $3 million project — paid with federal money — raises the height clearance of the entire bridge to 18 feet. After the work is complete, the structure will have a more rectangular design.

One overheight load on May 23 struck several trusses on the bridge, sending one span into the Skagit River and crippling the region’s economy for nearly a month. Three people also fell in, but nobody was seriously injured.

The incident shined a spotlight on freight traffic striking bridges throughout the state.

The Skagit River Bridge’s truss structure, which is lower toward the outside and higher at the center, was particularly susceptible to overhead strikes, records from the DOT show. At their highest point, the bridge trusses are 18 feet off the roadway. But the trusses are only 15 feet 6 inches off the roadway at the fog line — the white line on the right side of the road.

“This bridge is the lowest steel structure in the state of Washington over I-5,” said Polly Brooks, WSDOT assistant project engineer. “We will be increasing the clearance by approximately four feet and it will no longer be the lowest structure.”

The announcement was made by state Department of Transportation officials Tuesday at a Skagit County commissioners meeting. Mayors and top city staff heard about the upcoming project on Friday.

Swires said the opportunity for federal money was a surprise.

“This opportunity just surfaced,” she said. “We didn’t realize we had the money available.”

Swires said the work will require seven full closures and 36 partial closures to complete the work. Closures will be mostly at night.

The work will begin after the temporary span is replaced with a permanent span, which Swires said could occur by Sept. 7. Work on the structure’s truss retrofit could begin the next day. Bids for the project are due on Aug. 7.

Once the contractor is ready to work on the overhead structure, Swires said, work will be done six nights per week. Some nights will require a full closure of the interstate. Other nights, only one direction of the highway will be closed.

Linda Fergusson, president and CEO of the Burlington Chamber of Commerce, said she is pleased with the closure times. She and the DOT had been in discussions for a couple of days about the schedule, she said.

“We are very pleased with how hard they are working to accommodate the business needs,” she said.

Local routes experienced long delays during the bridge closure in May and June, but Fergusson said delays at night — when the closures for the retrofit will occur — were only about 10 minutes from the George Hopper interchange to College Way.

Working six nights per week, the crew will have 50 working days to finish, Swires said. The retrofit is scheduled to be completed by Nov. 23.

Bryan Harrison, Burlington city administrator, said the news last week came “as a bit of a shock,” but a pleasant one.

The company that wins the bid for the project will remove parts of the overhead bridge structure, including parts of diagonal braces and most of the lowest trusses.

Read more about the bridge’s collapse at http://skagit.ws/171ZibA