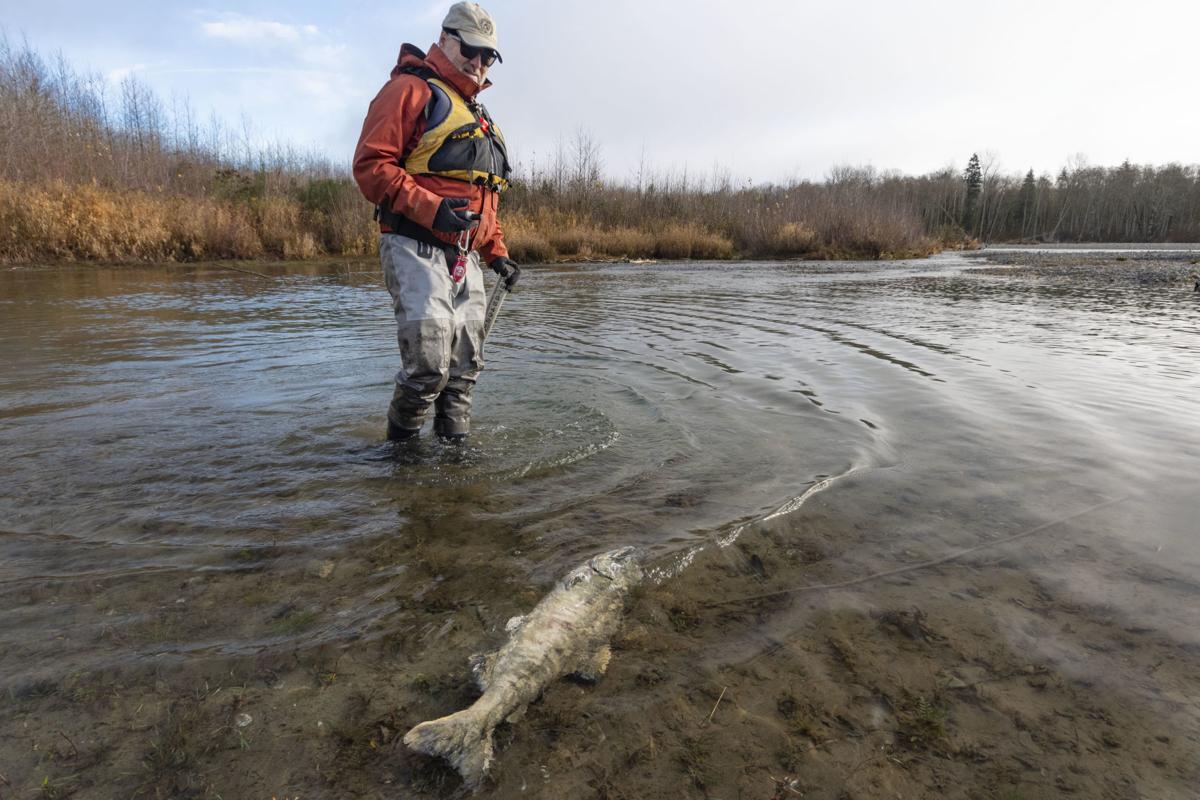 Stan Walsh of the Skagit River System Cooperative walks past the carcass of a chum salmon Nov. 29 at Washington Eddy in the Skagit River during a spawning survey conducted with Seattle City Light. 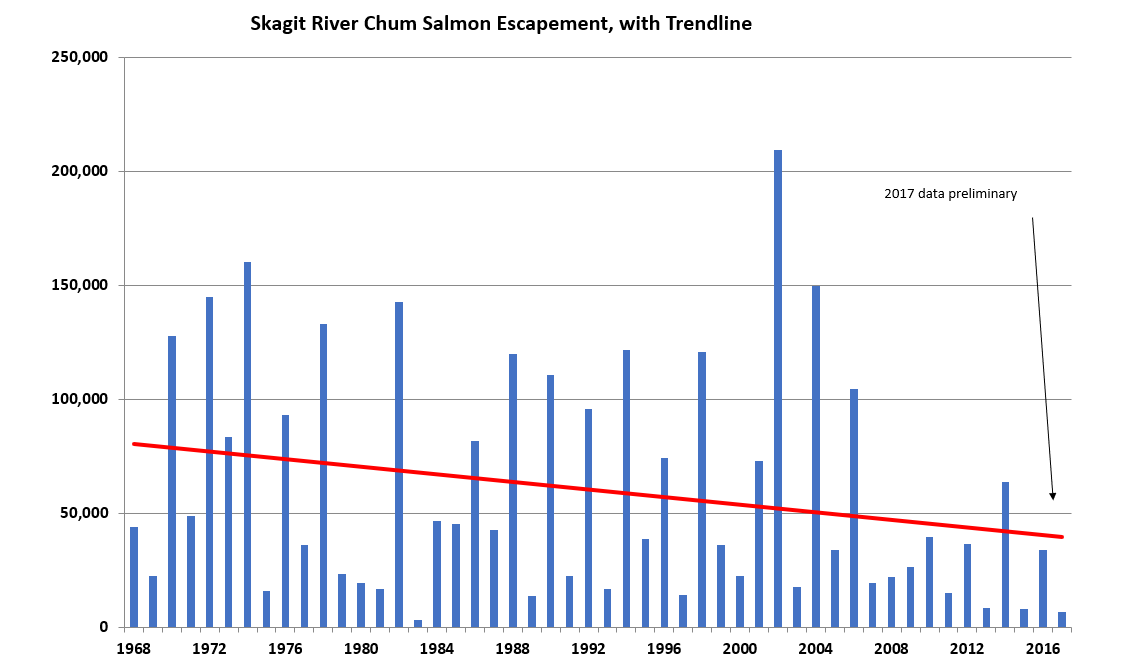 This graph created by the Skagit Watershed Council using state Department of Fish & Wildlife data shows the decline in the number of chum salmon returning to the Skagit River watershed over the past several decades. The decline continues, with the 2017-2018 cycle setting a record low.

Stan Walsh of the Skagit River System Cooperative walks past the carcass of a chum salmon Nov. 29 at Washington Eddy in the Skagit River during a spawning survey conducted with Seattle City Light.

This graph created by the Skagit Watershed Council using state Department of Fish & Wildlife data shows the decline in the number of chum salmon returning to the Skagit River watershed over the past several decades. The decline continues, with the 2017-2018 cycle setting a record low.

The number of chum salmon in the Skagit River watershed continues to reach new lows since monitoring began in the 1960s.

The most recent tally is in from the state Department of Fish & Wildlife and area treaty tribes that co-manage the salmon, and the numbers don’t look good.

Despite projects by Seattle City Light and others to restore fish habitat throughout the Skagit River watershed, local chum returns continue to decline.

The recent estimate makes the 2017-2018 returns — which generally consist of lower returns in odd years and higher returns in even years — the lowest two-year tally since record-keeping began. The two-year estimate is about 25,000 fish.

The prior two-year period is the second lowest on record, with about 42,000 fish estimated to have returned.

He said a recreational fishery hasn’t been allowed on the Skagit River since 2008.

Upper Skagit Indian Tribe Natural Resources Director Scott Schuyler said the tribe, for which chum salmon were once a subsistence food, hasn’t fished for chum since 2007.

“The chum salmon were the staple of my tribe in the winter months and ... we haven’t even had a fishery in 12 years based on the low population,” he said.

Fish & Wildlife, the Upper Skagit and the Skagit River System Cooperative — a natural resource management agency for the Swinomish and Sauk-Suiattle tribes — count chum returning to sections of the Skagit and Sauk rivers as well as some tributary creeks from about mid-October to late December.

They use those annual counts to estimate population sizes, which influence the process for setting seasons for commercial, recreational and tribal fisheries each spring.

While chum returns fluctuate, the population has overall been on the decline for at least the past decade.

The average two-year return over the past decade has been 55,000.

The downward slide, as Barkdull calls it, appears concentrated in rivers in Skagit and Snohomish counties.

“The Skagit, the Stilly (Stillaguamish) and the Snohomish have all been doing rather poorly as a group,” Barkdull said. “We don’t know why that’s happening exactly.”

He and Schuyler said the incidental catching of chum during marine fisheries and warm marine waters could be factors.

“The chum on the Skagit — and in fact on the Stillaguamish and Snohomish also — have almost disappeared off of the face of the earth,” Schuyler said. “We are very concerned.”

While Columbia River and Hood Canal chum were listed in 1999 as threatened under the federal Endangered Species Act, Puget Sound chum — the population that includes fish in the Skagit River — are not federally protected because throughout the region the species doesn’t appear to be in trouble.

The Upper Skagit tribe is among those that want to figure out why fewer are returning to the Skagit and other area rivers.

“Skagit’s the largest watershed in northern Puget Sound,” Schuyler said. “We’ve been lucky to have the sockeye return ... but the chum salmon need us to identify what has gone on and how can we alleviate whatever the underlying factors are.”

Tribal and recreational fishermen aren’t the only ones missing larger chum runs in the Skagit River.

With fewer of the fish in the river, fewer bald eagles are also being reported along the river’s banks during winter.

“There aren’t as many chum carcasses for them to eat,” Barkdull said. “You’re seeing more eagles on the Nooksack because that’s where the food is.”

The lows during odd years have also continued to dip lower, according to Fish & Wildlife data. Return estimates have dropped incrementally from 26,400 in 2009 to 6,700 in 2017.

“We’ve had poor chum survivals for quite some time now, but they’re getting worse,” Barkdull said.