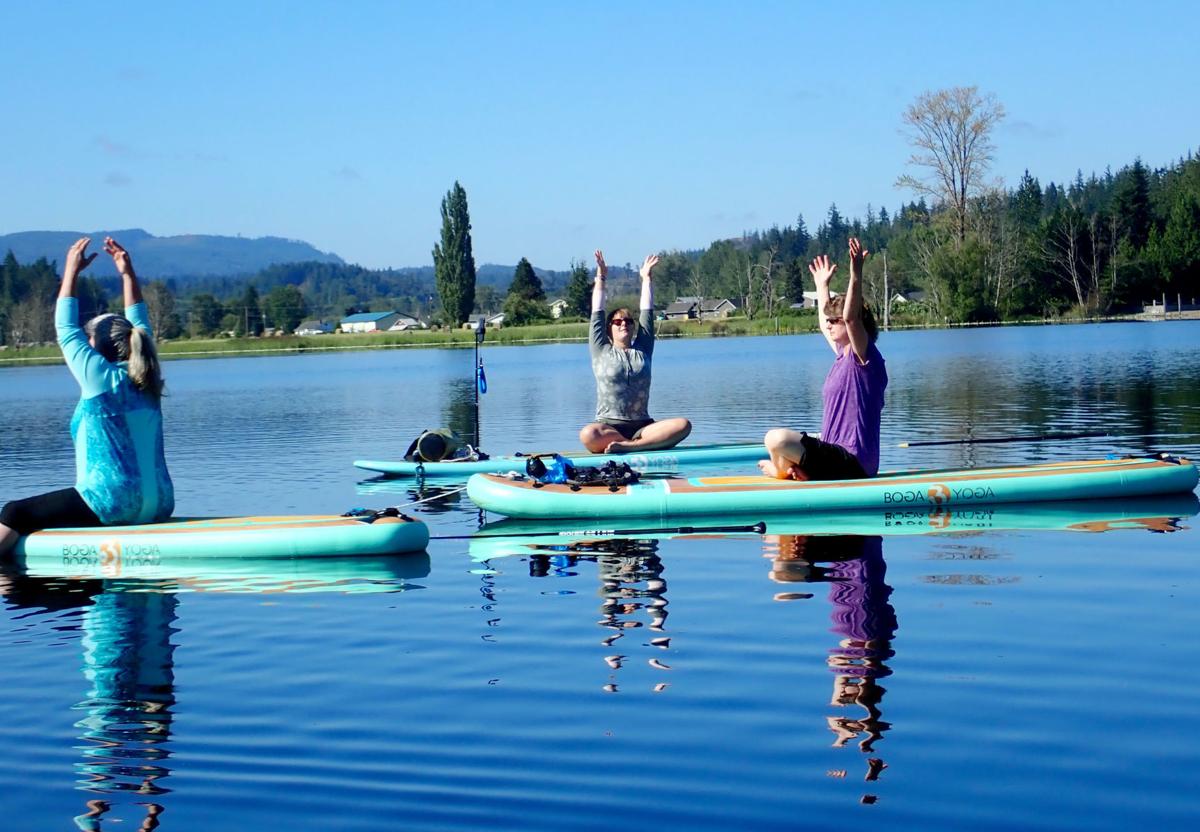 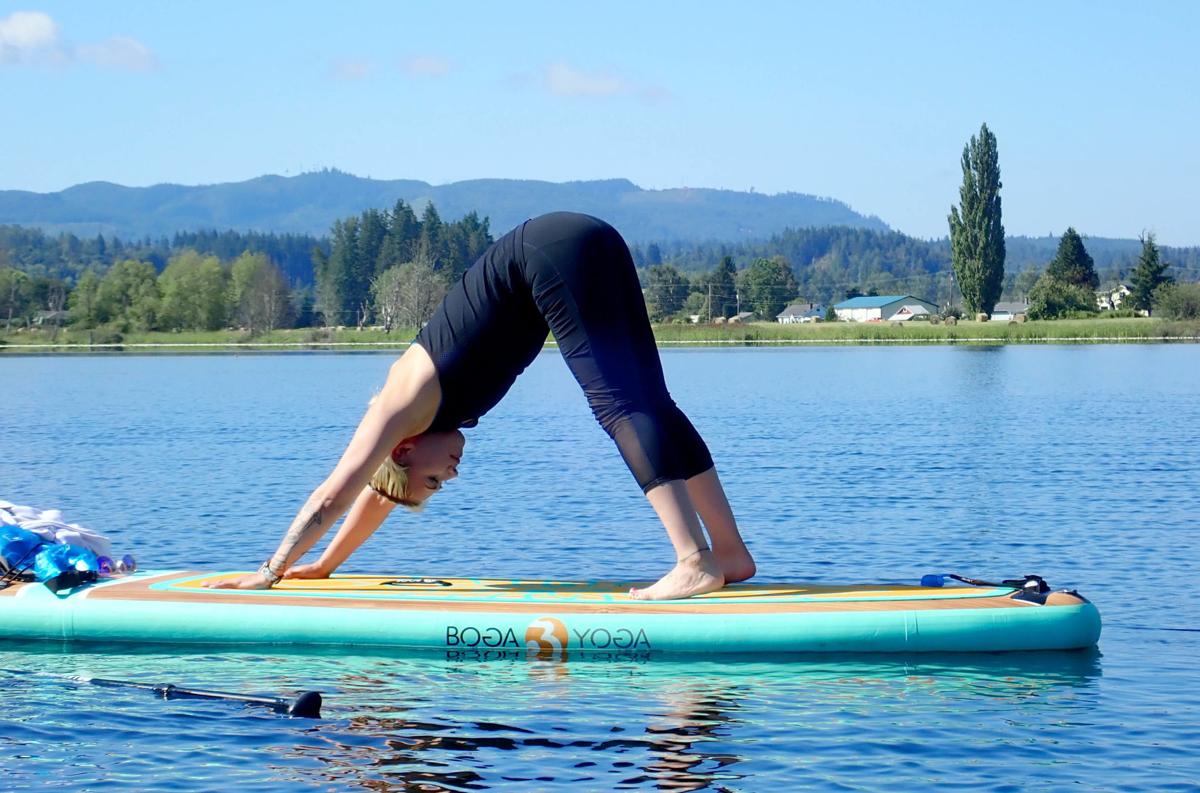 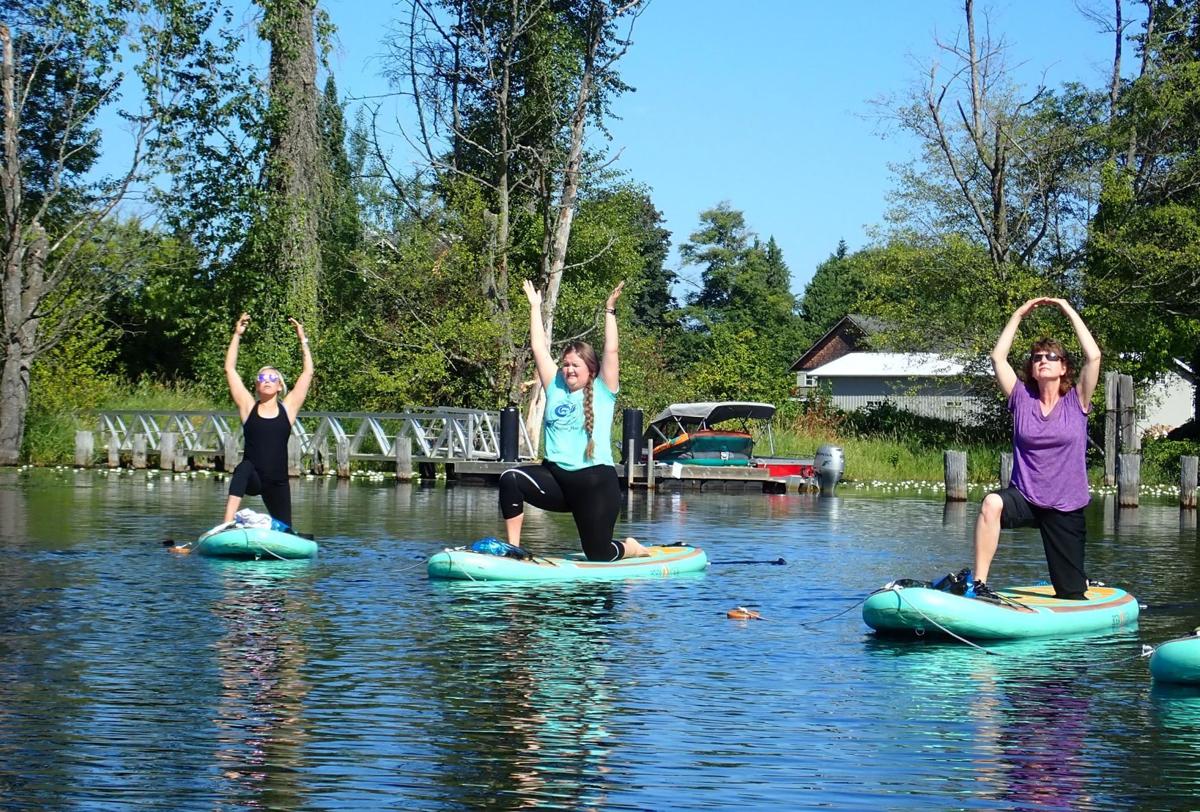 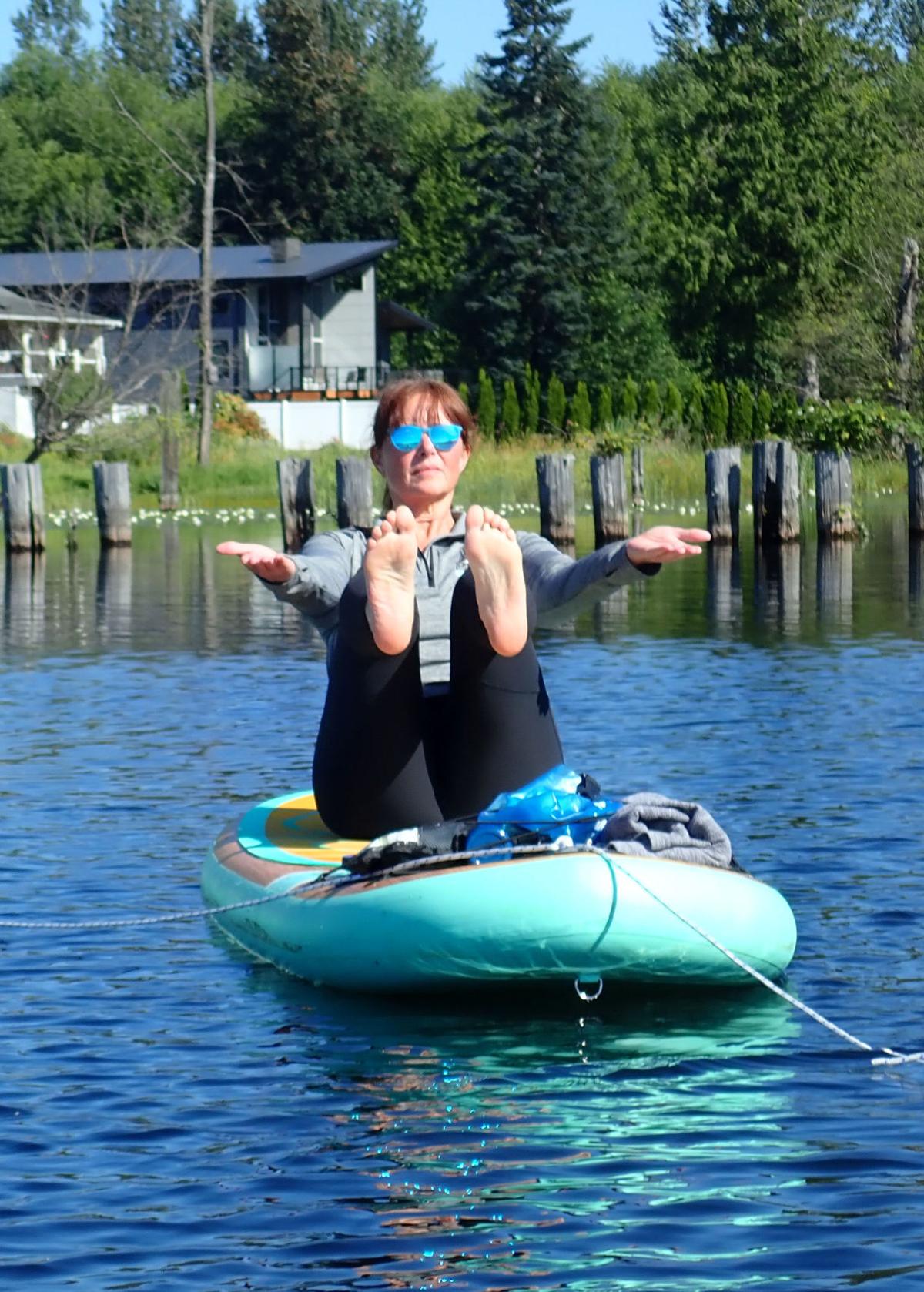 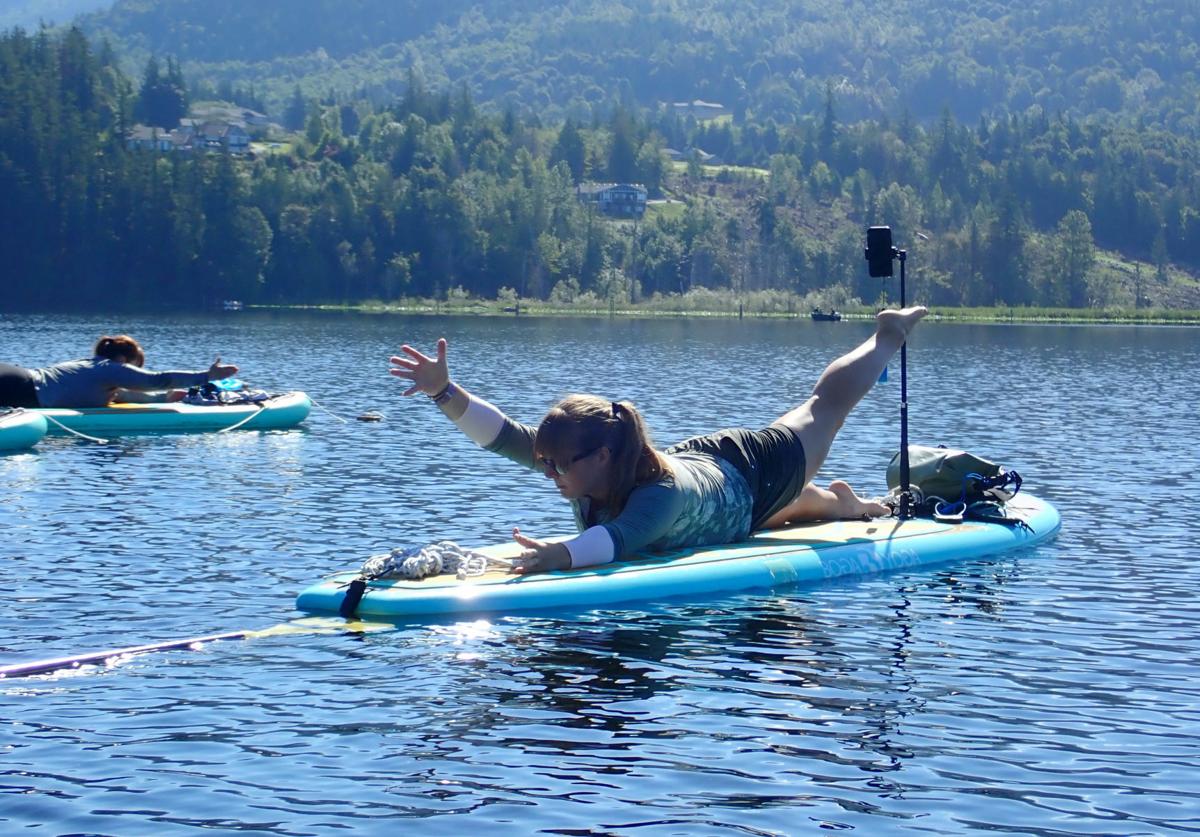 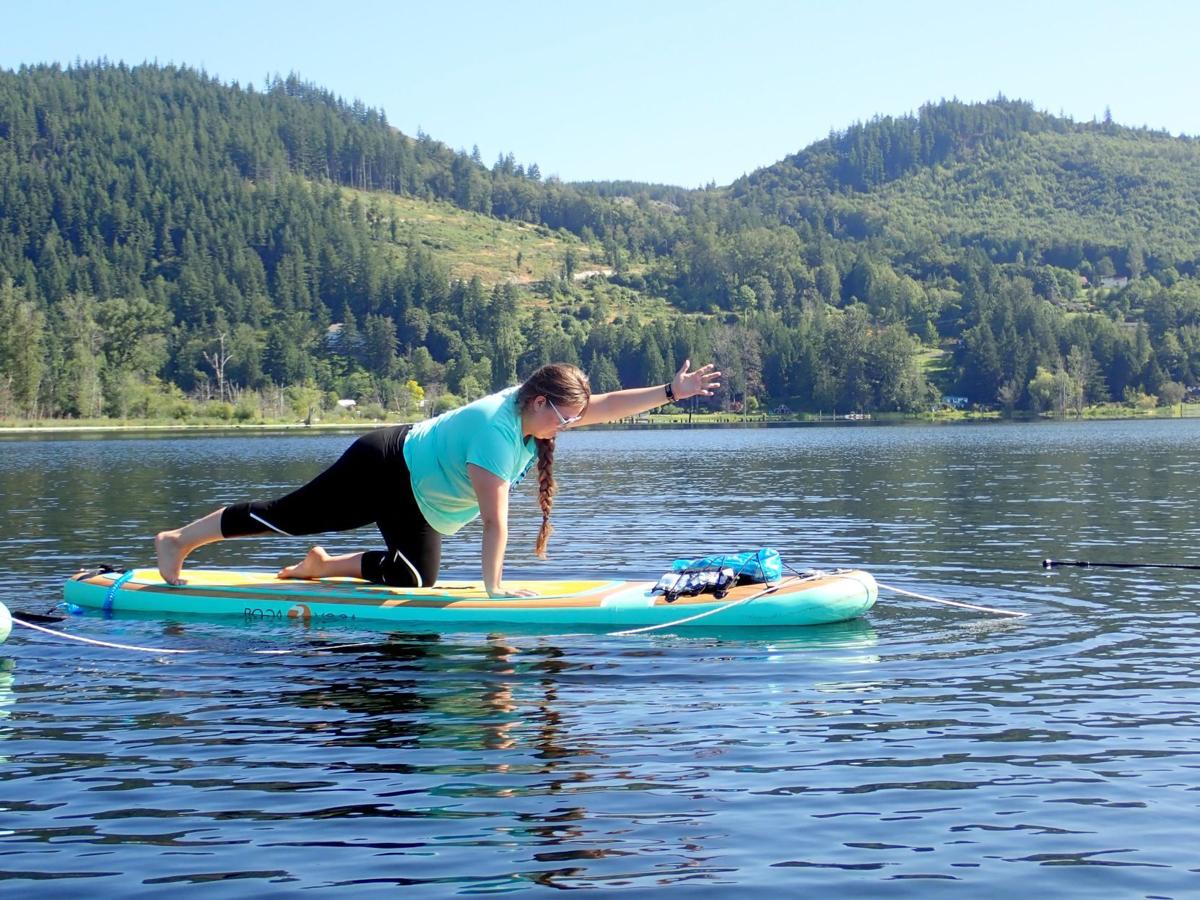 Vina Brown tries out a pose July 25 during a stand-up paddleboard yoga class on Clear Lake. 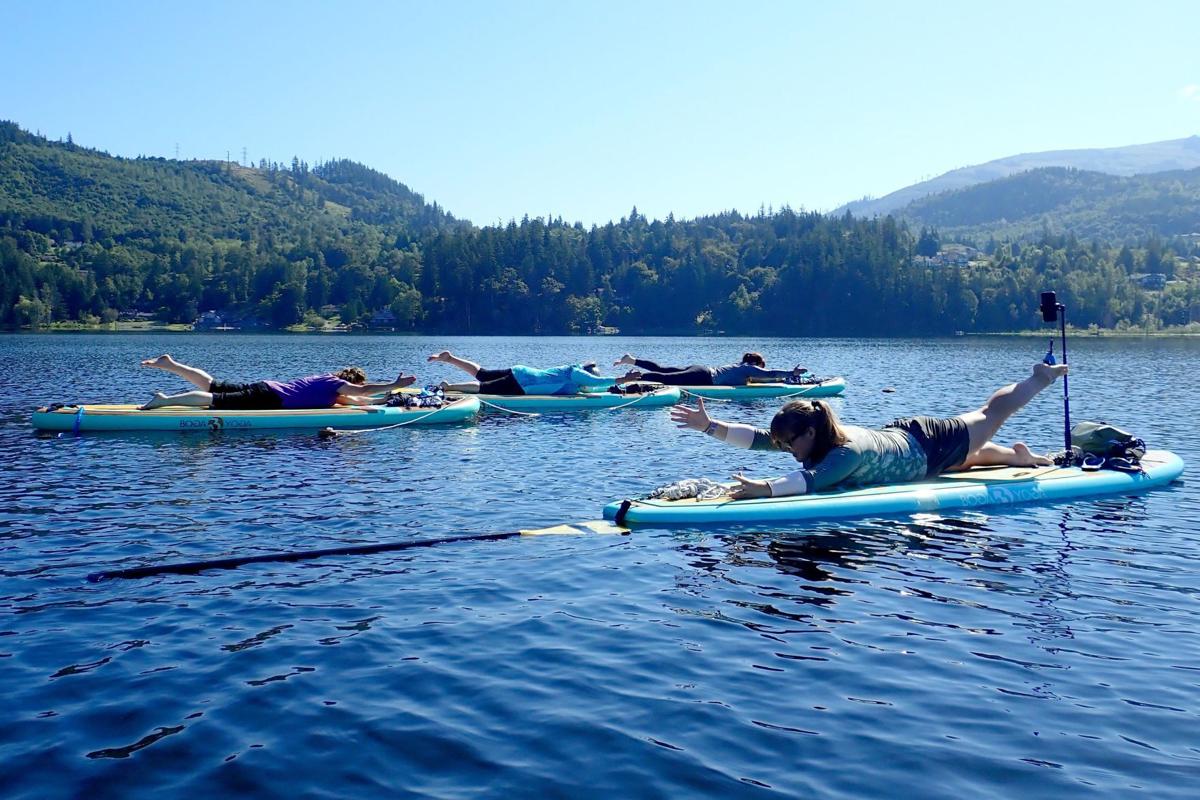 Vina Brown tries out a pose July 25 during a stand-up paddleboard yoga class on Clear Lake.

CLEAR LAKE — On a sunny, calm day on Clear Lake, Katie Holmstrom guided five students in yoga poses on stand-up paddleboards, helping them find balance and stability on the water.

At first, some students were shaky. Holmstrom suggested they take a wider stance on their boards, among other adjustments, to improve stability. By the end of the July 25 class, some were able to stand up on their boards for the first time.

She said stand-up paddleboard yoga differs from yoga on land because it engages the body’s stabilizer muscles.

“Because you’re on a moving surface, it’s really testing balance,” Holmstrom said. “You have to engage your muscles and stay soft and flow with the water. If you’re rigid, you fall in.”

The environment is also different.

“You’re out in nature on the water, during the summer the sun is shining, you have the warmth of sun and water moving under you,” she said.

The classes start with instruction on paddling before students launch onto the water. Once on the water, students are given anchors to attach to their boards so they don’t move around.

Classes are limited to six participants.

Holmstrom said the yoga poses are basic, making them good for all experience levels. During the “Yogi’s choice” section of the class, students are invited to try any pose they like. It’s during this section — when some attempt head or hand stands — that people have fallen in, she said.

Beth Lee, of Arlington, said she had no experience with either yoga or paddleboarding but signed up because she loves the water.

“I kept feeling like I was going to fall in,” she said. “The instructor said to just trust the board.”

She said the yoga movements helped ease her lower back pain.

Ashley Graf, of Sedro-Woolley, signed up for the Clear Lake class after doing a session on Bowman Bay.

Best friends Anna Leigh Finkbonner and Vina Brown, both of Bellingham, signed up together.

Finkbonner said she wanted to try a new activity and remain active despite the COVID-19 pandemic. Brown said she was shaky at first on her paddleboard and said Holmstrom’s direction to “flow with the water and ease into it” helped her find stability.

Holmstrom said she is working to add classes through September.