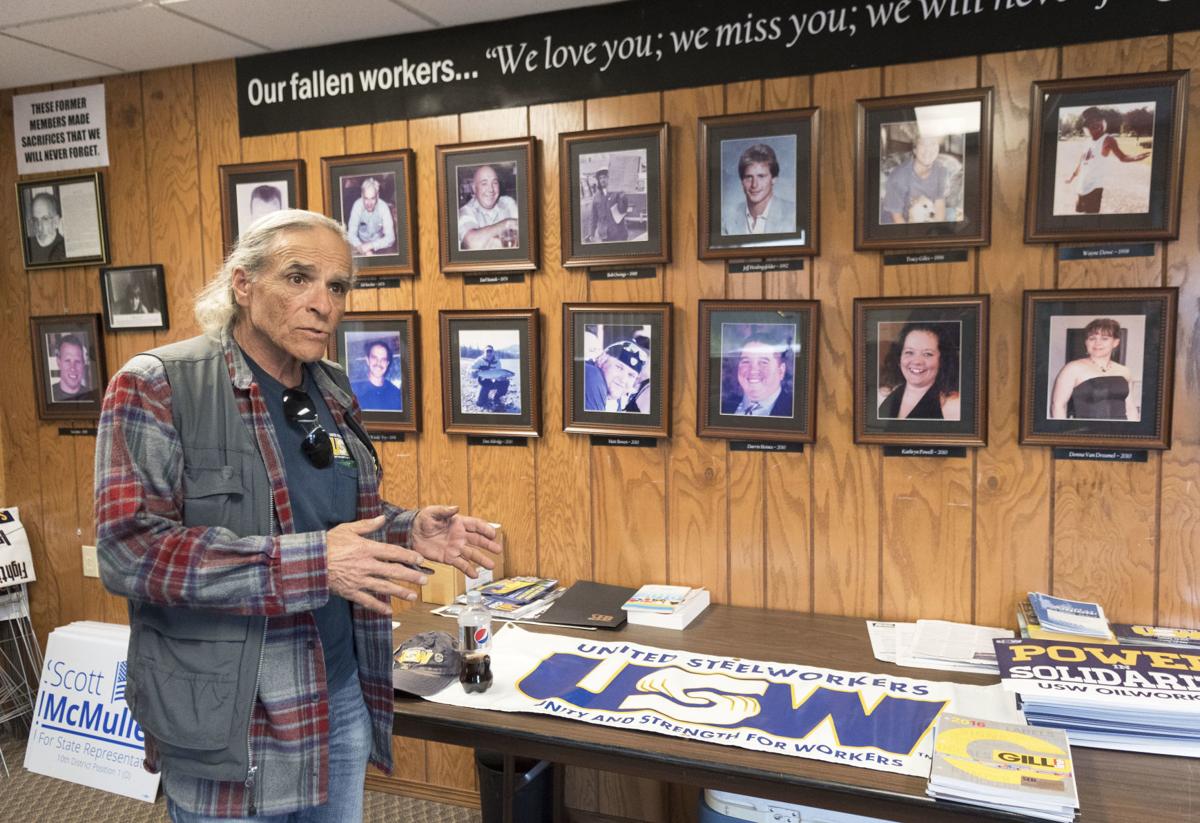 George Welch, president of United Steelworkers Local 12-591, talks May 14 at the union hall in Mount Vernon about workers killed in oil refinery incidents. Those who have died are shown on the memorial in the background. 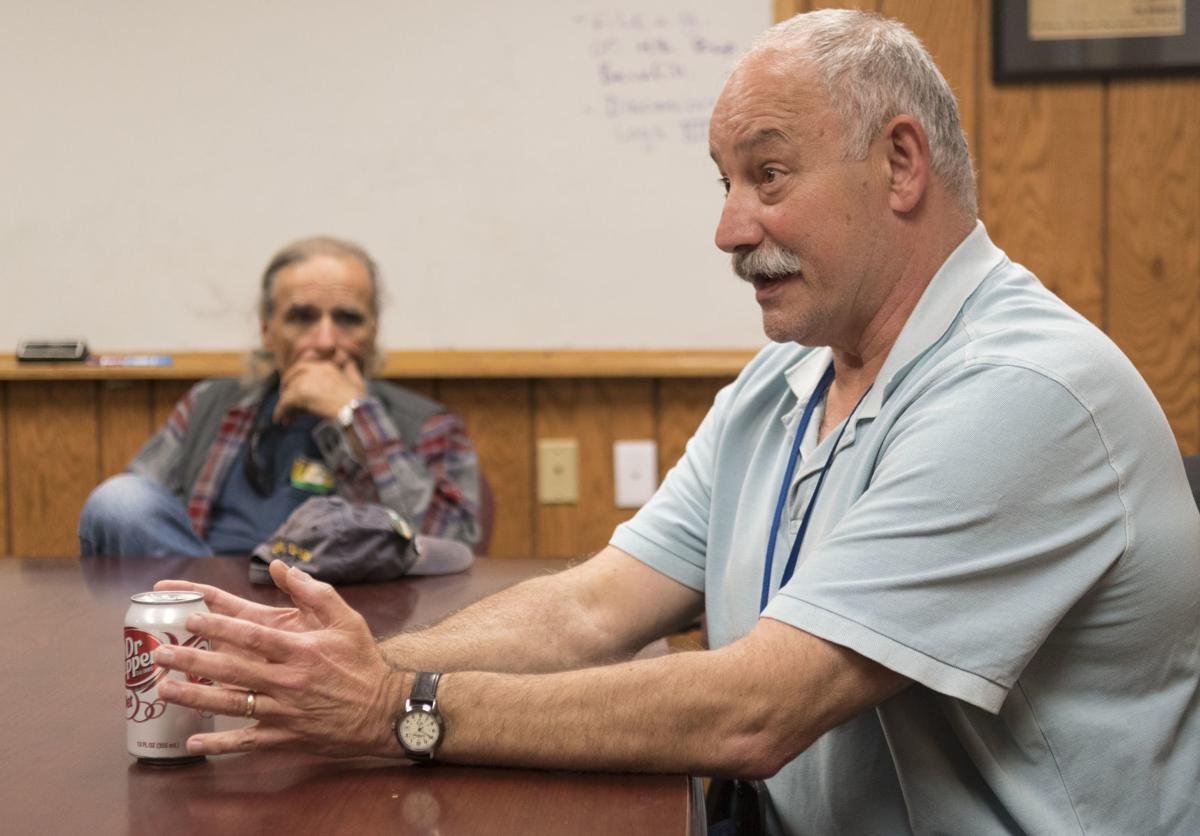 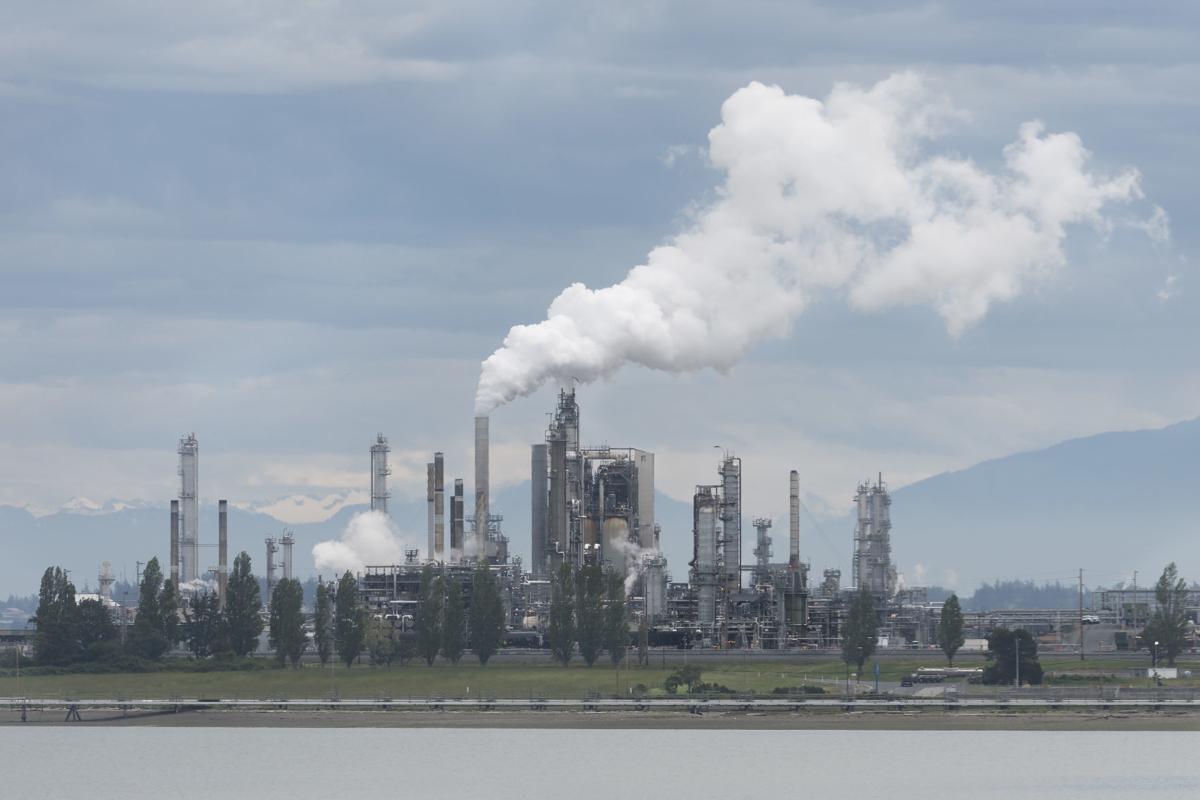 The Marathon Anacortes Refinery in May 2019. 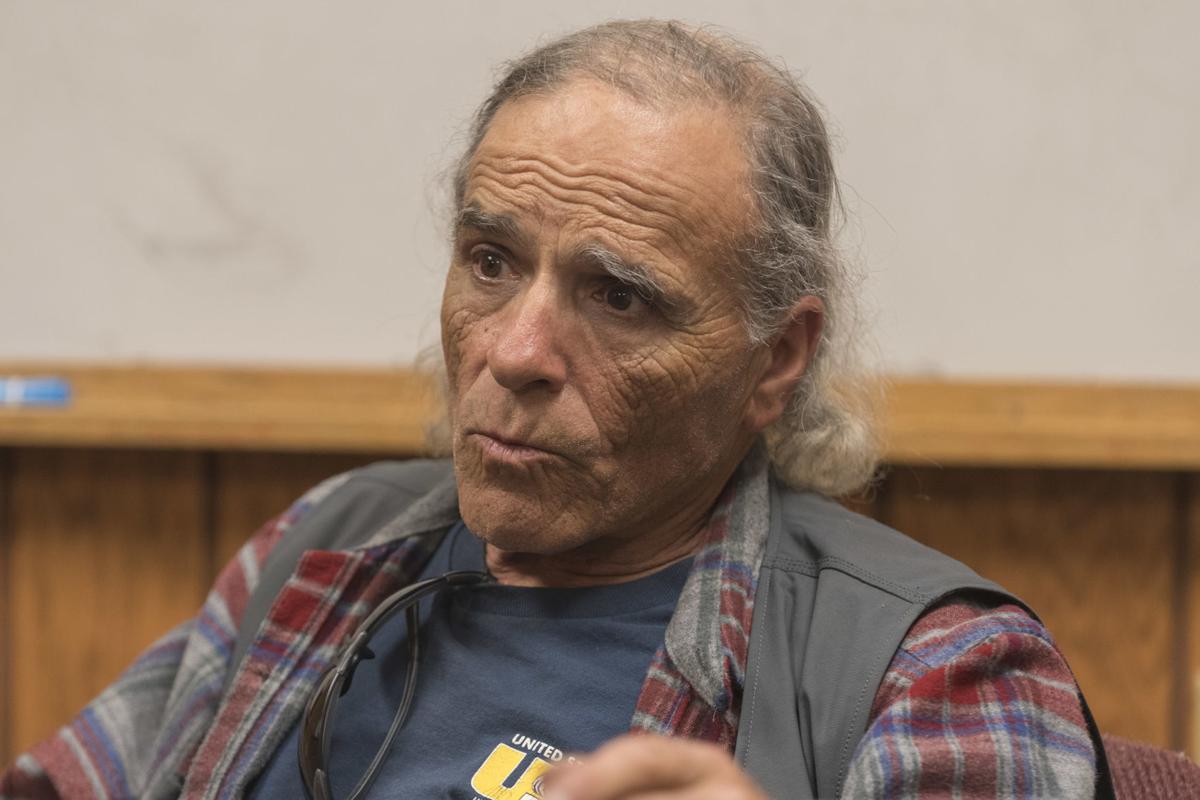 George Welch, president of United Steelworkers Local 12-591 and a Shell Puget Sound Refinery employee, talks May 14 about his years working at oil refineries.

George Welch, president of United Steelworkers Local 12-591, talks May 14 at the union hall in Mount Vernon about workers killed in oil refinery incidents. Those who have died are shown on the memorial in the background.

The Marathon Anacortes Refinery in May 2019.

George Welch, president of United Steelworkers Local 12-591 and a Shell Puget Sound Refinery employee, talks May 14 about his years working at oil refineries.

For the first time since 1992, the state is revising safety rules that aim to prevent fires, explosions and releases of toxic chemicals at the state’s five oil refineries.

Representatives from labor and environmental groups say stronger safety rules will better protect workers and the communities and environment near refineries.

Community members filled a room at the Burlington Senior Center on May 2 to learn about the rules update. The meeting was hosted by United Steelworkers Local 12-591, BlueGreen Alliance, a labor/environmental group, and environmental groups Evergreen Islands and RE Sources for Sustainable Communities.

A public comment period on the proposed changes is set to begin this summer.

USW Local 12-591 President George Welch said at the meeting that 16 of its union members have died in incidents since 1955.

That includes 13 at March Point refineries near Anacortes, where six killed in 1998 at the Equilon refinery — now Shell Puget Sound Refinery — and seven in 2010 at the Tesoro refinery, which is now Marathon.

“All of them were preventable,” he said. “Each and every one.”

“We have an opportunity now to make a meaningful change,” he said.

But at least one Anacortes refinery and a trade group representing oil refineries said they believe some of proposed changes may weaken existing safety standards.

Over the past several years, the state Department of Labor & Industries has been working with representatives from oil companies, industry groups, unions and environmental organizations to develop new safety rules, said Sally Buckingham with L&I’s Division of Occupational Safety and Health.

“We’re looking at equipment that has toxic or hazardous chemicals under pressure or heat that, if released, would cause severe injuries,” Buckingham said. “PSM is directed toward maintaining the safety of that equipment so people aren’t exposed or injured.”

Garey said at the May meeting that PSM is different than occupational safety, such as preventing falls on the job. It’s all the steps that have to be done right to avoid exposure to hazardous chemicals.

Buckingham said the state’s current rules were developed in 1992 and are outdated. The state is modeling the new standards after rules adopted in California in 2017, which are the most protective in the nation, according to the California Department of Industrial Relations.

“Once California did that, we wanted to jump on it,” she said.

The U.S. Chemical Safety Board recommended in its investigation report of the 2010 Tesoro explosion that the state strengthen its process safety rules for oil refineries.

The board’s Rick Engler said at the meeting that California’s update was in response to public outcry following a 2012 fire at a Richmond, California, refinery.

“I think there’s an opportunity in Washington state to not wait for the next release or explosion,” he said.

Buckingham said L&I hopes to pass the new rules by year’s end after completing a public comment period and a cost/benefit analysis.

When California’s rules were developed, an economic analysis found they would cost that state’s refineries $58 million a year. The analysis also concluded that the changes were a worthwhile financial investment because one major refinery incident could cost $220 million.

Among the proposed changes are some that deal with equipment safety and the role of workers in identifying potential hazards.

One change would require refineries to assess how corrosion, cracking and other degradation could damage equipment, according to an executive summary on the proposed changes.

“Much of the equipment in refineries is several decades old,” Buckingham said. “The chemicals they are applying has changed since the ‘50s.”

Another section calls for “employee collaboration” to allow for more input from experienced workers, she said.

Mike Wilson, national director of occupational and environmental health for BlueGreen Alliance, said at the meeting that the proposed rules would give workers more of a right to participate in decision-making and to report, shut down and refuse to do unsafe work.

Another proposal would expand requirements for contract workers at refineries.

“The employer will now have more of a role in ensuring the safety of contract employees and training them about the hazards of the employer’s site,” the executive summary states.

The two Anacortes refineries employ about 900 people, not including contractors.

Welch, president of USW Local 12-591, has worked at Shell for 34 years and at refineries for more than 50. He is an electrician and instrument mechanic.

The 71-year-old said the number of workers killed on the job has dropped significantly with the passage of workplace safety laws. From his experience, Welch said worker education and knowledge are key.

“Our ability to know the hazards we are dealing with and get ourselves educated on the chemistry and physics and the mechanics, that has helped keep us safe,” he said.

He said he thinks the proposed changes will help empower workers, too.

“If they see something that is unsafe, (the rules) give them the authority to put a stop to it, with no repercussions,” he said.

Wilson, who has been a part of the process to develop the new safety standards, said he is hoping for stronger rules that aren’t overly rigid.

“(The refinery) is a safer place to work now than when I was a kid,” he said. “I’ve seen a lot of good positive stuff. And the new (rules) are going to take us forward.”

At the May meeting, Mary Ruth Holder of Evergreen Islands said the impacts of explosions and chemical releases don’t stop at the fence lines of the refineries.

She cited a February 2015 chemical release at Shell that sickened many near La Conner and the Swinomish Indian Tribal Community reservation.

Stronger safety rules also protect the surrounding area, including Fidalgo and Padilla bays that support important habitat and food sources for species such as great blue heron, said Eleanor Hines with RE Sources for Sustainable Communities.

The Skagit Valley Herald reached out to Marathon, Shell and the Western States Petroleum Association (WSPA), a trade organization that represents companies in five states, for comment. All sent statements via email.

In a statement, Marathon State Government & Public Affairs Manager Matt Gill said “Marathon Petroleum supports Washington State’s efforts to update the current PSM program, and we are working through the Western States Petroleum Association to ensure the new rule provides meaningful improvements and does not inadvertently dilute the current focus on worker safety. The safety of our employees and the communities in which we operate is a priority for our company.”

“The health and safety of our employees and the community will always be our top priority,” Ertel said. “Shell has been actively engaged in the Process Safety Management policy review process. We will continue to put the best interests of our employees and communities first and work with policy makers to ensure the most effective process safety management practices are in place.”

A WSPA spokesperson sent a statement from the organization’s northwest director of regulatory and legislative policy, Jessica Spiegel.

“There is no greater priority for our industry than the health and safety of our employees and the communities in which we operate,” Spiegel said. “We are actively engaged in the Process Safety Management policy review and are concerned that some proposals may actually weaken safety standards under which we operate. That can’t happen. We will continue to put the best interest of our employees and communities first and work with policy makers to ensure the best possible safety management practices are in place.”

After California adopted its new rules in 2017, it increased its compliance staff to enforce the new rules, said Mike Wilson with BlueGreen Alliance.

“It will be important (for Labor & Industries) to look at the resources available for both enforcement and compliance assistance,” he said. “To make sure these refineries understand the regulation and are putting resources into implementing it.”

He said Washington still needs to clarify parts of the proposal to make sure they are enforceable. He said he disagrees with the statements from Marathon and the WSPA that suggest the proposal might weaken existing standards.

“There’s no question that the (proposed) regulation is far more protective than what is currently on the books,” he said.

In many cases, implementation falls to refinery employees, he said.

“We’ve felt from the beginning that the employee participation language is extraordinary important,” he said. “These facilities can really work out (safety rules) themselves, and the workforce can have a meaningful role.”

Ken Wilson said that as the union’s process safety representative at Shell, his job is to represent all workers and work with the company to enforce safety standards.

“Sometimes we don’t always agree,” he said. “Sometimes we butt heads, but at the end of the day, I gently remind them (I was there during the 1998 explosion), and that is the reason I do this job because I never want this to ever happen again on my watch.”

After the deadly 1998 explosion, he said he served as a medical responder and was in charge of body recovery. Two of the people killed were close friends.

“It’s something you just don’t forget,” he said.