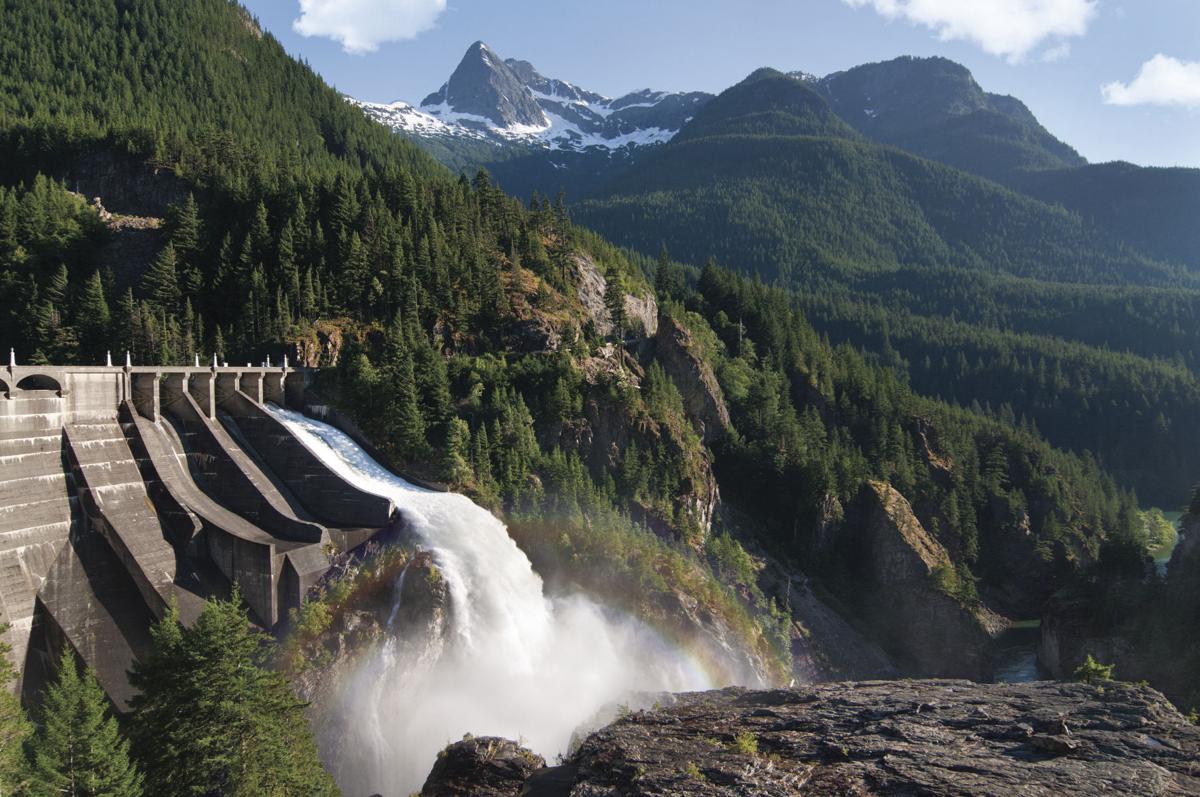 A rainbow encircles splashing water as it is released from Diablo Dam on the Skagit River. 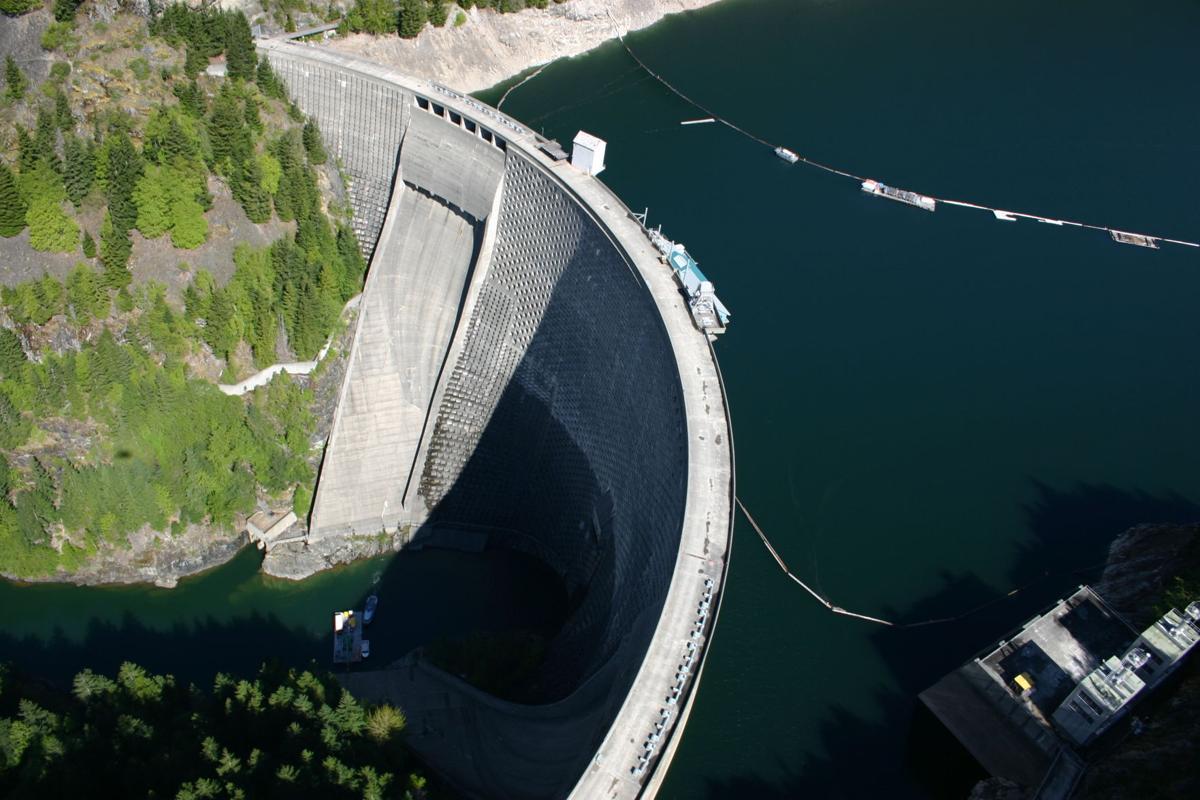 Ross Dam is the northernmost of the three Skagit River dams operated by Seattle City Light. 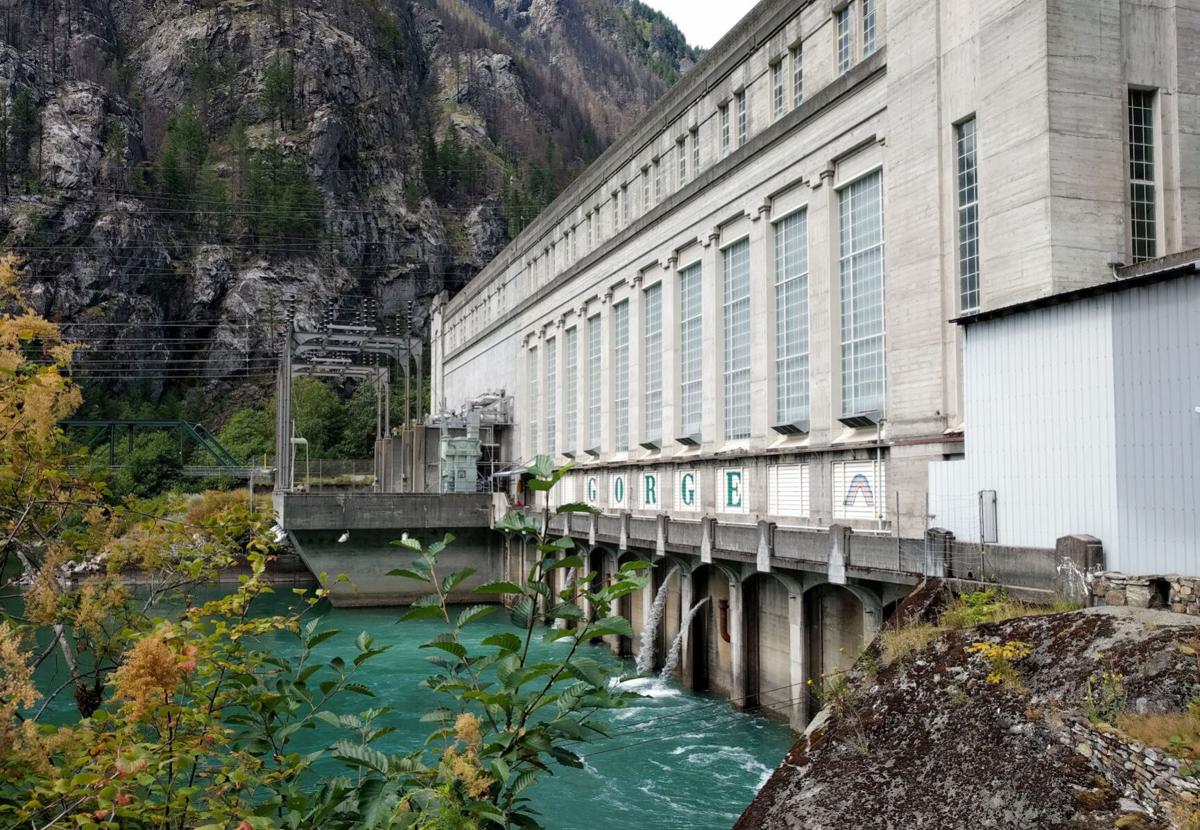 The Gorge Powerhouse is the southernmost of the three powerhouses operated by Seattle City Light on the Skagit River. The three dams in the system provide about 20% of the power consumed in the greater Seattle area. 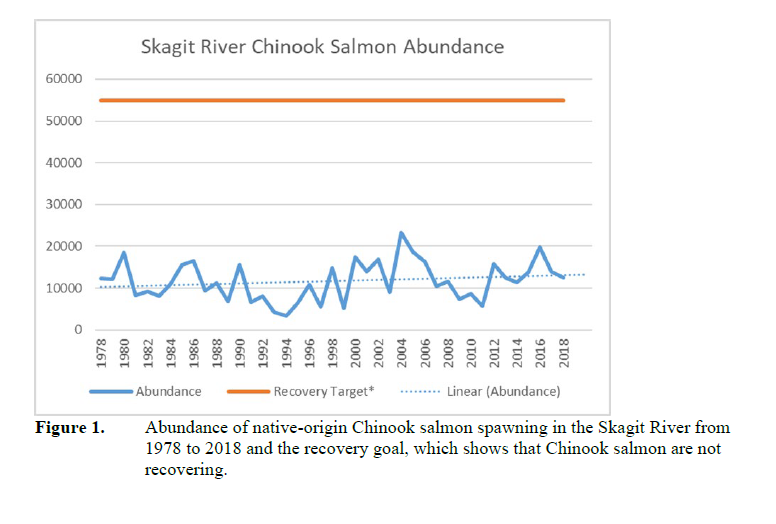 Over several decades, the number of Skagit River chinook has trended slightly upward, yet remaining tens of thousands of fish below recovery goals set in 2005. 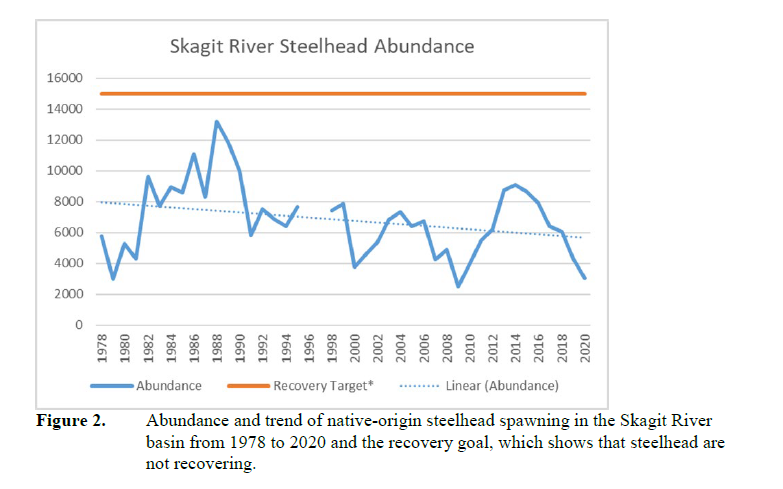 Over several decades, the number of Skagit River steelhead has trended downward, with about 2,000 less in 2018 than in 1978. 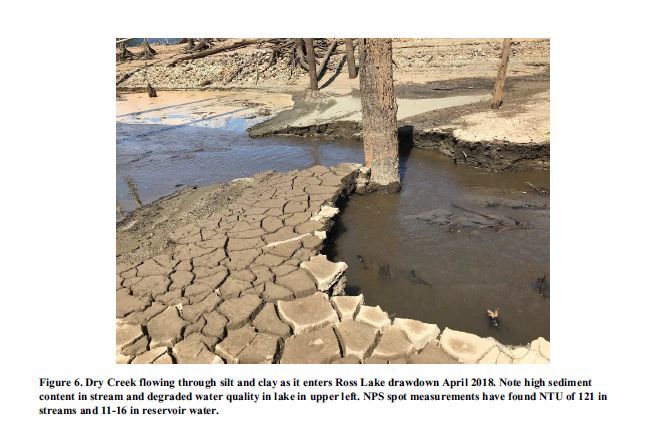 During low water levels in summer 2018, the silty lakebed of Ross Lake was exposed. The National Park Service asserts this is evidence that the silt blocked by Seattle City Light dams would serve as an important habitat building block if it could make its way down the Skagit River.

After several days of tense meetings in January and February and submitting hundreds of pages in feedback in early March, the government agencies, tribes and nonprofits that are considered license participants are awaiting Seattle City Light's next official move in the relicensing process for its Skagit River dams.

The next step for the utility is filing a revised study plan for the proposed license. That plan is due to the Federal Energy Regulatory Commission (FERC) by Wednesday.

Points of contention as Seattle City Light seeks a new multidecade license from FERC include how the dams impact salmon, other kinds of wildlife and habitats throughout the watershed. Of particular emphasis are the Skagit River chinook and steelhead that have been listed as threatened under the Endangered Species Act since the last dam license was issued in 1995.

"From our perspective, we simply want to fully understand the effects of hydropower on anadromous fish in the Skagit system," said Scott Schuyler, a member of the Upper Skagit Indian Tribe and director of the tribe's natural resources department.

While the dams provide renewable energy for Seattle and flood control for the Skagit Valley, the Upper Skagit and other tribes, federal and state agencies, Skagit County and various nonprofits believe work should be done to lessen the impact the dams have on the river and its fish.

"Project operations can be modified in a manner that would benefit these at-risk species," a March 5 comment letter from NOAA's National Marine Fisheries Service states.

The organization wrote that it has "submitted study requests designed to elucidate operational and structural improvements to the Project ... to protect these at-risk species."

According to the National Marine Fisheries Service, potential improvements include establishing fish passage at the dams, restoring off-channel habitat along the river, enhancing the movement of sediment and wood debris in the river, allowing water back into the "bypass reach" between Gorge Dam and Gorge Powerhouse, and restoring estuary habitat in the Skagit River delta.

From groups that include the North Cascades National Park Service Complex that manages the land surrounding the dams to the state Department of Fish & Wildlife that with tribes co-manages fish populations, there's broad agreement that change is needed to save Skagit River salmon and steelhead.

"Populations of salmonid species native to the Skagit River have declined over the term of the current Project license," a March 8 comment letter from the Swinomish Indian Tribal Community states. "Perpetuation of status quo Project operations ... will lead to the loss of fish stocks, an outcome that would eviscerate the heart of Skagit River Basin and represent a plainly unacceptable loss."

MANY IMPACTS TO FISH

While a major focus of the study requests has been on fish passage, blocking fish from accessing upstream habitats isn't the only effect the dams have on salmon and steelhead.

Comments from various tribes, government agencies and nonprofits also say that because the dams trap sediment upstream, release pulses of cold water and affect the movement of debris downstream, they alter habitat throughout the river system.

They say that means understanding such factors as water quality and habitat formation — from the northernmost reach of Ross Lake to where the river meets Skagit Bay — is critical to the relicensing.

"Project facilities and operations influence the survival and productivity of aquatic species both above and below the Project," the National Marine Fisheries Service wrote.

Wendy McDermott, director of the regional office of the nonprofit American Rivers, wrote in a comment letter that "fish that migrate up the Skagit River are affected by Project operation from the moment they enter the estuary, whether it be inadequate sedimentation, diminished woody debris, or inappropriate flows. Juvenile salmonids that rear in the delta also experience Project-related impacts."

Sediment, including gravel and fine silt, is an important building block of habitats. In the upper Skagit River, as much as 1 million cubic yards of sediment gets trapped behind the dams each year, according to the National Marine Fisheries Service.

Also, the water allowed through the dams is altered, particularly in terms of temperature — and that can affect fish.

"Release of colder water from Ross Reservoir is a direct project effect that has the potential to impact habitat and productivity of aquatic species downstream," states a March 8 comment letter from the state Department of Ecology.

Monika Kannadaguli, hydroelectric projects manager for Ecology's Northwest Regional Office, wrote in the letter that in other watersheds the state has seen cold water from dams delay the migration of adult salmon. She also wrote that the release of warmer water from dams has accelerated the development of salmon embryos and the hatching of baby fish.

Ecology and the Upper Skagit tribe are among those asking that water quality be broadly assessed in the relicensing process.

"Collecting the requested data will aid in the development of license conditions consistent with treaty trust obligations," a section of the tribe's 863-page comment letter states. "Water quality is a critical component to recovery and health of Skagit River salmon populations."

For Schuyler's tribe, holding Seattle City Light accountable for its alteration of the Skagit River watershed is personal.

When the federal government authorized construction of the Skagit River dams in the early 1900s, the ancestors of members of the Upper Skagit tribe felt a waterway integral to their beliefs, way of life and survival was being stolen from them. Generations later, tribal members continue to feel the sting.

"The Skagit River is named after our people. The river is sacred to us," Schuyler said. "We're not going to just sit back idly and let that go on for another 100 years."

Particularly painful for the tribe is the hydroelectric project's management of the bypass reach below Gorge Dam. That stretch of river was a spiritual site for Schuyler's ancestors, and he has described emotional visits he and his family have made to the now largely dry span of riverbed.

"We feel that's an egregious offense to us and our culture, by dewatering roughly three miles of our river and boring a tunnel through a sacred area," he said.

With Seattle City Light seeking a new license to continue operating the dams for another 30 or 50 years, the tribe is fighting claims long touted by the utility that the dams don't impact fish.

The tribe spearheaded a "Plan B Caucus" involving tribes, government agencies and nonprofits that is focused on protecting ESA-listed salmon and other wildlife.

Through that caucus, the tribe has found broad support for calls to evaluate fish passage, habitat and water quality. The group is now waiting to see how far Seattle City Light will go with its licensing studies and potential remedies.

"Hydropower had its time (unchecked), and now it's time to re-evaluate," Schuyler said. "The city of Seattle that has derived so many benefits from this hydro project in Skagit County — it's their time to contribute to salmon recovery in the Skagit ... City Light needs to come to that reckoning."

The Upper Skagit Indian Tribe isn't alone in feeling impacts to land and water significant to its heritage. From the traditional territory of the Nlaka’pamux on the British Columbia side of Ross Lake to the Sauk-Suiattle, Stillaguamish and Swinomish tribes in the lower Skagit watershed, several indigenous communities have reported impacts to cultural resources.

Seattle City Light's existing license for the Skagit River Hydroelectric Project expires April 30, 2025, and application materials for a new license are required to be completed two years in advance.

Also in 2020, Seattle City Light filed a proposed study plan. License stakeholders, including government agencies and tribes, had until March 8, 2021, to submit comments.

Seattle City Light's revised study plan, with any changes prompted by stakeholder comments submitted in writing and given verbally during meetings in January and February, is due by Wednesday.

Many comments have requested Seattle City Light study fish passage through the dams, as well as ways to restore fish habitat the dams impact, including downstream of the dam-powerhouse facilities.

"We've revised our proposal and we are going to be studying fish passage over all three dams, and exploring some fish habitat restoration," he said.

The utility in December announced some concessions toward fish passage studies.