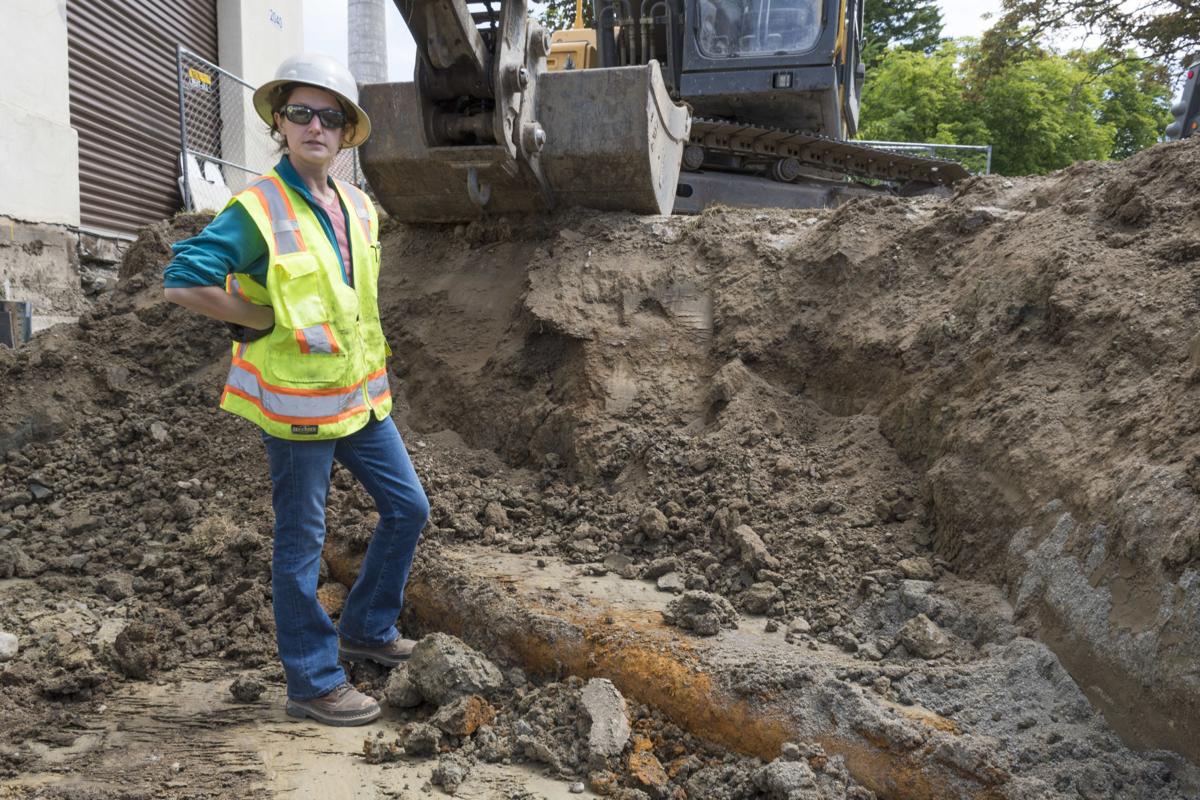 SoundEarth Strategies project manager Clare Tochilin shows an old pipe Monday that has impeded progress on a dig to clean up contamination from a underground petroleum storage tank on the SWIFT Center campus near Sedro-Woolley. 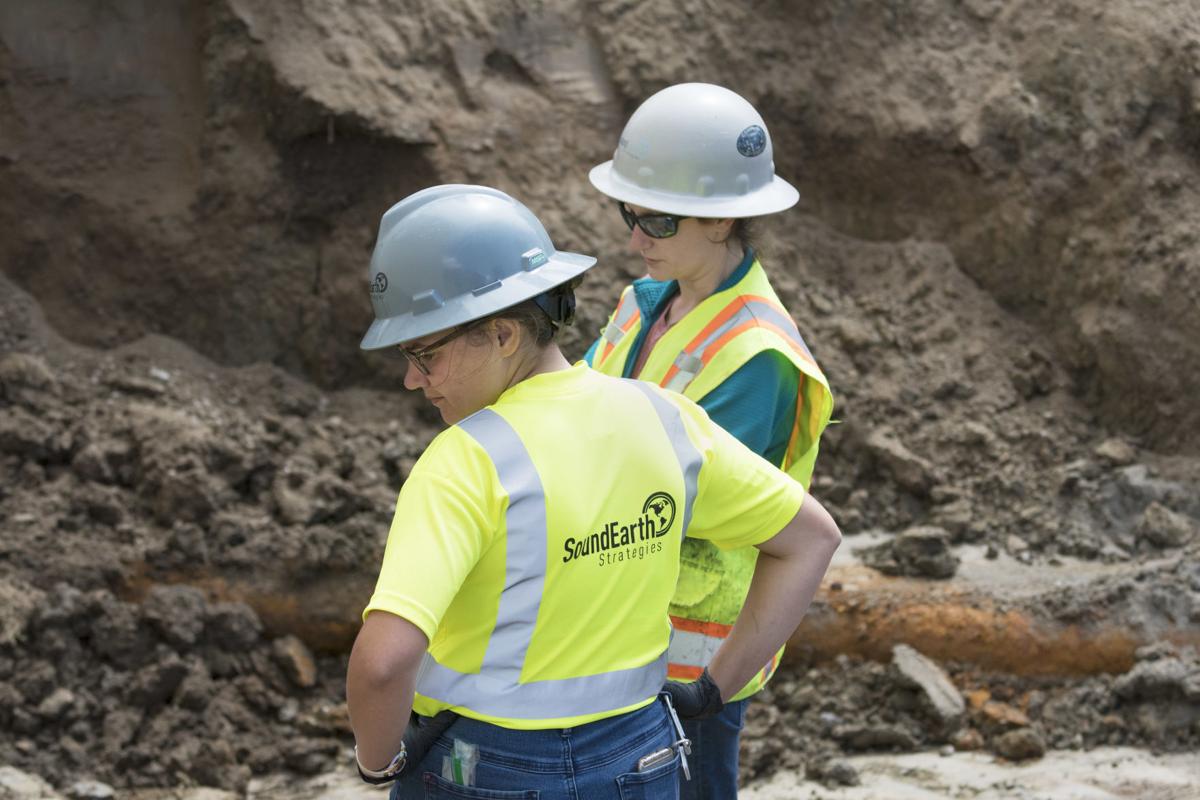 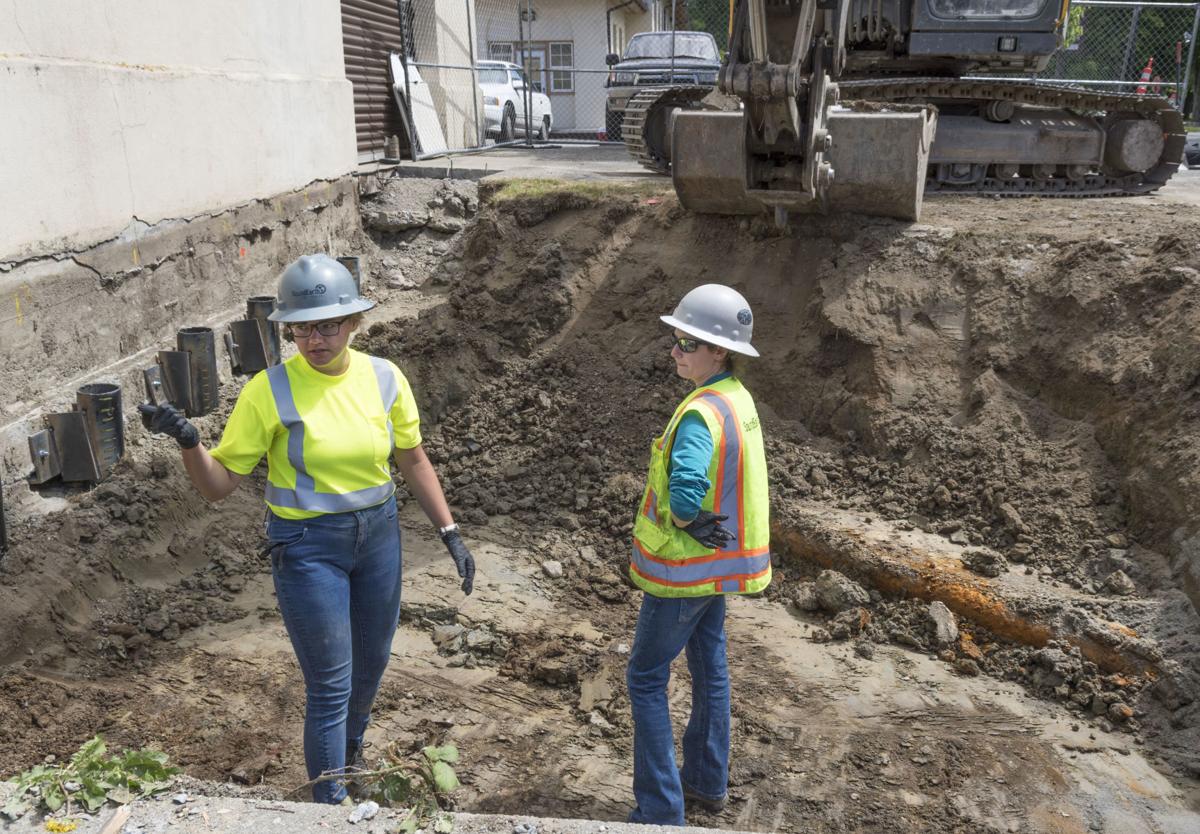 SoundEarth Strategies project manager Clare Tochilin shows an old pipe Monday that has impeded progress on a dig to clean up contamination from a underground petroleum storage tank on the SWIFT Center campus near Sedro-Woolley.

SEDRO-WOOLLEY — About a year after taking ownership of the Sedro-Woolley Innovation for Tomorrow (SWIFT) Center, the Port of Skagit has started a cleanup project at the site and been awarded federal funding for additional work to address hazardous materials.

On Monday, a crew tasked with cleanup of underground petroleum storage tanks adjacent to the former Northern State Hospital maintenance building had dug about 5 feet into the soil that was beneath the cement.

Project manager Clare Tochilin of SoundEarth Strategies said the contamination is between 6 and 8 feet down.

“We’re right on the verge of getting to the contaminated zone,” she said.

Port of Skagit Planning and Environmental Manager Heather Rogerson said the contaminated soil will be taken to Everett for disposal.

That cleanup project, made possible with a $224,400 loan from the state Pollution Liability Insurance Agency, is one of several that are needed on the SWIFT Center campus before redevelopment can occur.

The about 225-acre campus includes buildings designed in the early 1900s by the famed Olmsted brothers and greenery including large trees that give it a park-like feel.

Beneath the surface, however, consultants have found chemicals including some from underground fuel storage tanks, laundry solvents and lead-based paints.

“We’ve been studying this property for so long ... to see cleanup really happening is great,” she said.

The port, city of Sedro-Woolley and Skagit County partnered in 2014 to bring the historic campus into local ownership and redevelop it into a new economic driver for the region.

The three agencies have contributed to various studies of the property — including testing of soil and water for pollution — and the port drafted an agreement with the state Department of Ecology early this year for addressing contamination that has been found.

The maintenance building site is one of seven requiring cleanup.

Cleanup of another two contaminated sites — where chlorinated chemicals were found near the former hospital’s laundry building and arsenic was found near a building and athletic field — is being planned with the help of a a $395,000 Brownfields Cleanup Grant the U.S. Environmental Protection Agency announced last week.

“We’re very excited about the award,” Rogerson said. “This funding will be used to address legacy environmental contamination at the property.”

She said that work will likely begin in the fall after the port and EPA agree to a project plan.

EPA’s Brownfields program is intended to help transform contaminated sites into community assets that attract jobs and achieve broader economic development while taking advantage of existing infrastructure, according to the program website.

“This program is targeted to provide funding for this kind of project,” Pollution Liability Insurance Agency Executive Director Russell Olsen said while checking in with the SoundEarth Strategies team Monday at the SWIFT center.

The agency’s loan program was created in 2016, and Olsen said the SWIFT Center cleanup is the very first loan-supported project to break ground.

The port and Ecology are working to finalize the draft agreement reached earlier this year, which will outline the port’s next steps.

With the exchange of shiny keys and a fallen tile from one of the iconic red roofs, the historic state hospital campus in Sedro-Woolley is now…

As the new owner of the former Northern State Hospital campus, the Port of Skagit has reached an agreement with the state Department of Ecolog…

Though it is working to clean up hazardous materials at the SWIFT Center, the Port of Skagit is also continuing to work toward opening part of the former hospital campus to the public.

Port Planning and Environmental Manager Heather Rogerson said access is expected this year, once parking becomes available at the Sedro-Woolley city park at the Fruitdale Road entrance to the campus and signs directing visitors to public and away from private areas of the campus have been installed.